Lancaster County has some of the worst soot pollution in the United States. 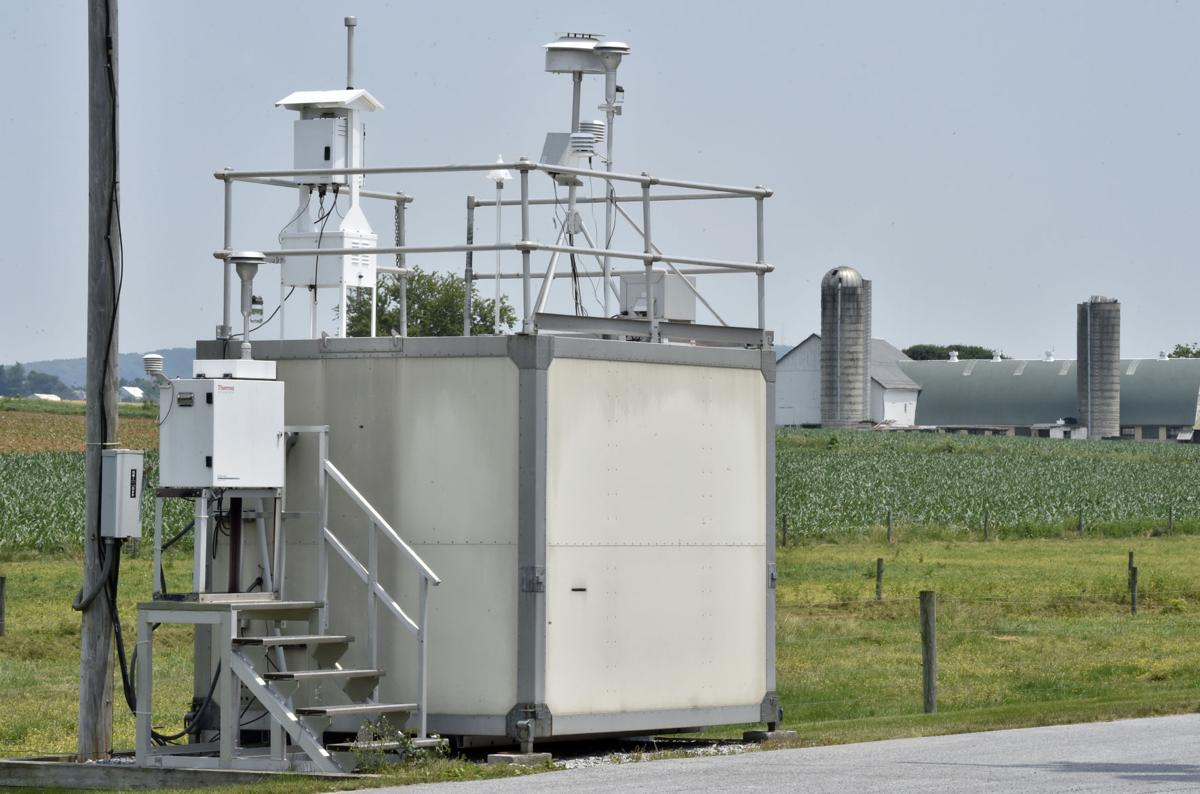 One of Lancaster County's two air pollution monitoring stations is in farm country near the village of Intercourse. 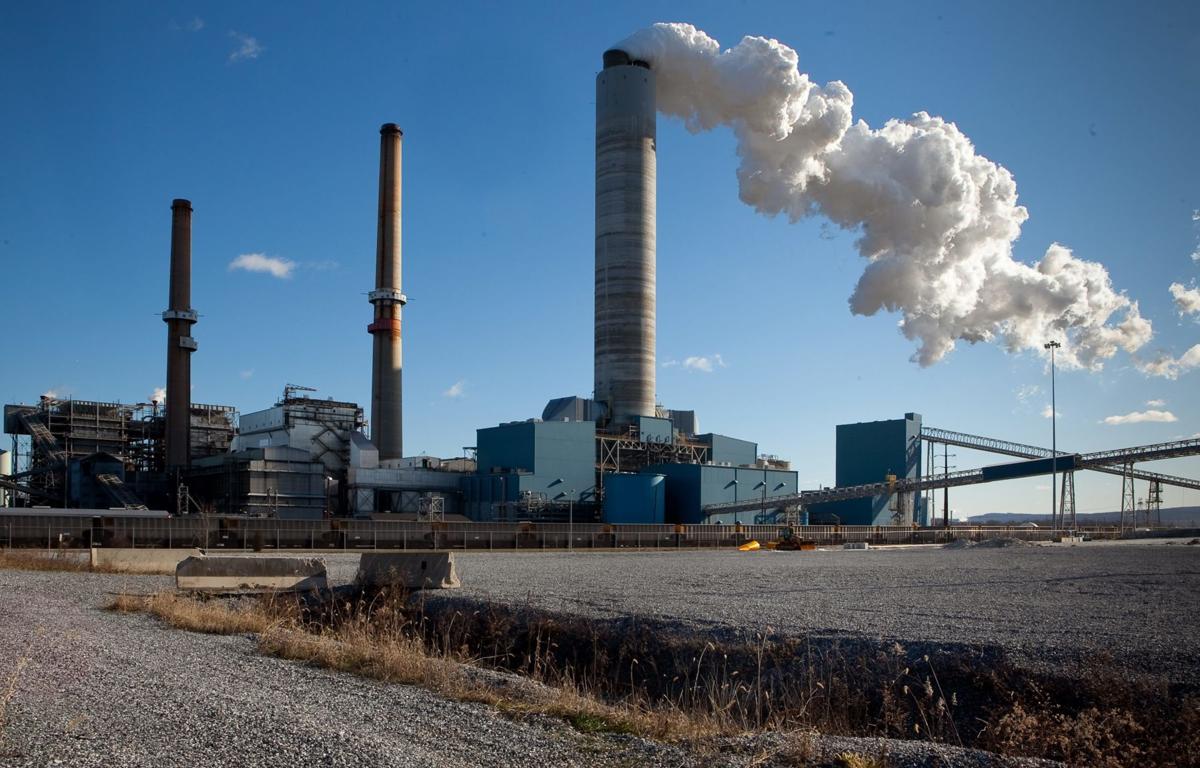 The Brunner Island power plant in York County is the single greatest source of bad air in Lancaster County, but levels are dropping dramatically with new air pollution equipment and a conversion to natural gas. (File photo: June 20, 2018) 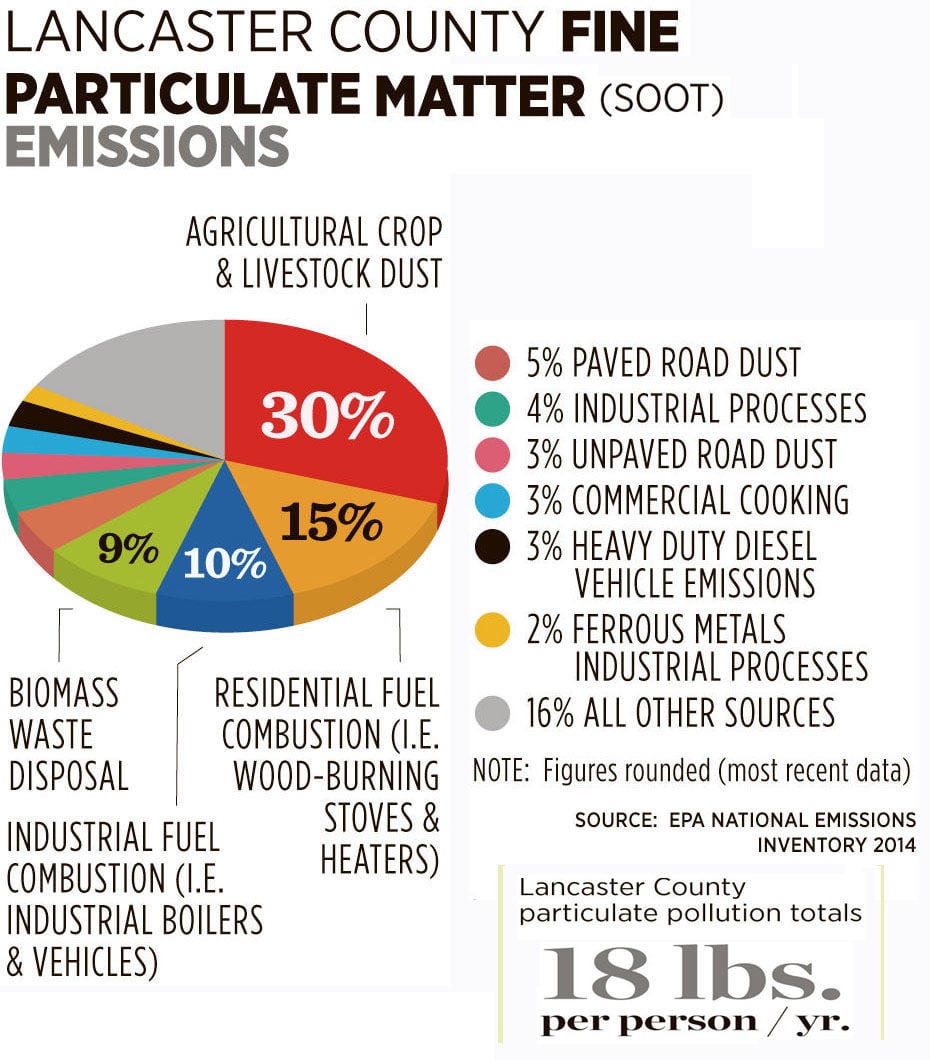 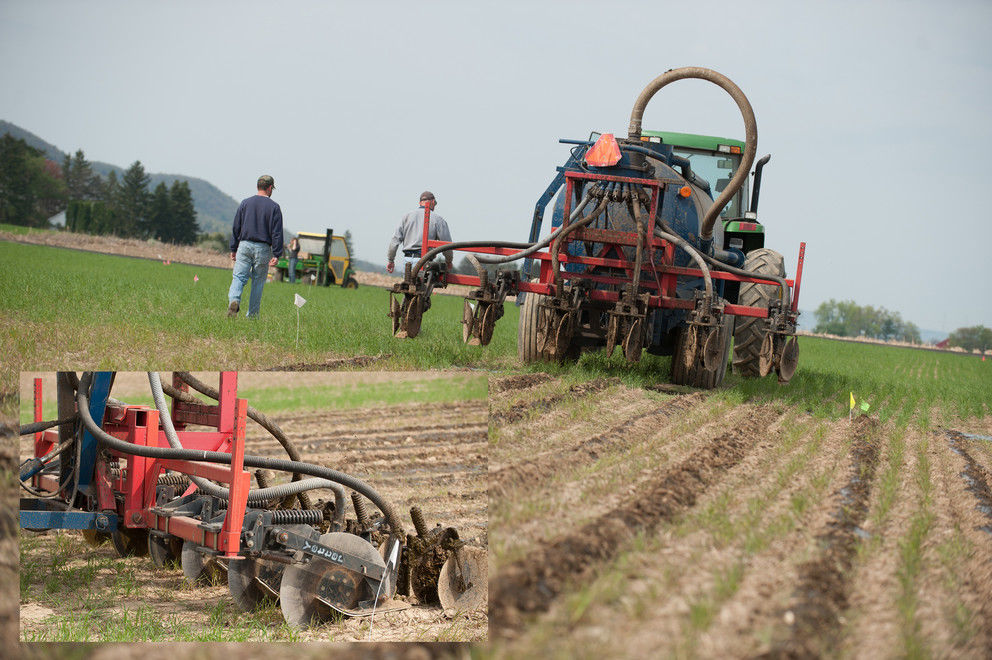 Spreading manure and fertilizer is a major source of soot in Lancaster County.

Even blame Lancaster County’s proud reputation as being Pennsylvania’s breadbasket — farming and growing things are a leading cause of our soot problems.

Each year, Lancaster County is lauded as an attractive place to live or retire to for its open spaces, quaint farmland and quality-of-life offerings.

And each year residents are vexed when national air-quality findings are released showing Lancaster County among the worst metropolitan areas in the United States for ozone and soot.

In the most recent “State of the Air” report by the American Lung Association, Lancaster County ranked as the eighth worst of 227 metropolitan areas in the U.S. for tiny floating particles of soot, technically known as particulate matter.

The county’s soot levels were worse than those of both New York City and Philadelphia.

For ozone — its visible form is smog — Lancaster County fared better but still ranked as the 62nd worst metro area in the country.

Both forms of pollution can harm the health of residents, especially children, the elderly, those working outdoors and those with respiratory problems.

One Leola resident certainly is puzzled at the seeming contradiction between Lancaster County’s reputation as a great place to live and its startling high air pollution.

“Why is the quality of our air in Lancaster County ranked so poorly, and what can be done to begin to correct it?” asked the man, who asked that his name not be used.

His question was voted on by readers for an in-depth review by LNP’s “We the People” feature.

“Some people move to Lancaster County to get away from big cities where the air quality is poor. Then they come here and find out that it’s not good air quality,” the reader observes.

Many reasons for bad air

It turns out there is no simple answer. The reasons are myriad. Some sources of the pollution are no fault of our own, as bad air drifts eastward into Lancaster County from power plants and metropolitan areas upwind.

But, certainly, the county is not blameless and generates plenty of its own foul air, from industries, power plants, homes and agriculture.

Consider that, in Lancaster County alone, there were 209 pounds of the precursors of ozone and soot generated for each county resident in 2014, according to figures taken from the EPA National Emissions Inventory.

Some of the sources may seem contradictory or surprising.

Soot and dust levels, for example, are usually higher at a rural monitoring station near Intercourse than one in Lancaster city with all its industries and exhausts from vehicles.

Surrounding farm activity is likely responsible, as well as wood-burning stoves and vehicle emissions blowing from the city, according to the state Department of Environmental Protection.

And consider this: The growing of flowers, fruit and crops is a major contributor to local ozone because they release volatile organic compounds.

But there’s also good news on the horizon.

New federal rules aimed at bringing down emissions from power plants and industrial boilers are already starting to show up in reduced soot levels in Lancaster County, according to the DEP.

The Brunner Island power plant in York County is Lancaster County’s largest single source of dust and soot emissions. But levels are being reduced dramatically due to the new federal requirements and the plant’s partial conversion from coal to natural gas.

Emissions also are falling from the P.H. Glatfelter paper plant, also in York County and also a major pollution source for Lancaster County as pollutants are carried here by prevailing winds from the west.

Let’s take a closer look at some causes.

Lancaster County’s flatness and location east of the Appalachian Mountains makes it prone to what are called air inversions, in which pollution lingers close to the ground, especially during the winter months.

The Appalachians normally send wind eastward. But in winter, high pressure from New England states forces cold air into the area and creates a wind out of the east at the surface.

Since cold air is more dense than warm air, it becomes stagnant and traps air pollution, keeping emissions from cars, local factories and agriculture from escaping into the atmosphere.

Other inversions are caused by cold temperatures and clear skies at night.

The inversions usually break by late morning or early afternoon.

Because of farming and development, Lancaster County is one of the most open counties in Pennsylvania, with only 13.5 percent tree cover.

Trees are known filters of air pollutants. And they lower surface temperatures, discouraging some emissions from becoming pollutants when heated.

But trees do release their own pollutants, known as volatile organic compounds, which are a precursor of both ozone and soot. They are important to plants’ defense and survival but can interact with man-made chemicals.

But “trees’ net effects still yield a reduction in ozone,” observes Kevin Stewart,  director of environmental health for the Mid-Atlantic region of the American Lung Association and a Manor Township resident.

Crops and soil also produce the compounds through microorganisms and plant roots. In fact, they are the leading source of the organic compounds from Lancaster County, though far eclipsed by man-made sources.

Spreading manure and applying commercial fertilizers is a major source of soot in Lancaster County.

That happens when ammonia gas is released. The gas condenses and forms liquid droplets. Mixing with other chemicals in the atmosphere, the gas is released as an unhealthy small particle into the air when the droplet evaporates.

Because of their sheer volume, emissions from engines in cars, diesel trucks and heavy machinery are a significant local source of nitrogen oxides, a component of ozone.

Nearly half the nitrogen oxides generated within the county comes from passenger vehicles and heavy-duty vehicles with diesel engines.

“Increased vehicle traffic (as Lancaster grows) will mean increased emissions; however, improving fuel efficiency in passenger vehicles will help offset some of that as the fleet turns over and newer, cleaner-burning vehicles replace older, less-efficient vehicles,” says Sean Nolan in the DEP’s Bureau of Air Quality.

County residents staying warm is a considerable source of emissions for soot problems.

Burning oil in residential furnaces accounts for nearly 70 percent of local sources for sulfur dioxides, a factor in soot formation.

Perhaps surprisingly, burning of wood stoves is the second-largest source of soot in Lancaster County, after agriculture. The large concentration of Plain sect farms is one reason.

“Due to its location with respect to the Susquehanna River, Brunner Island is the major source of emissions as it relates to Lancaster County,” says the DEP’s Nolan.

However, its huge impact on both soot and ozone is trending downward as a result of a gradual conversion from coal to natural gas, as well as new federal air-pollution equipment requirements.

However, according to one report, those major gains could be offset somewhat by the planned closure of the Three Mile Island nuclear plant.

According to The Brattle Group, consultants with nuclear clients, closure of TMI would mean power plants that burn fossil fuels — likely natural gas or coal —  would have to take up the power slack.

That would result in more nitrogen oxide emissions. TMI is currently scheduled to shut down by October 2019, though there are efforts underway on the state and federal level to keep nuclear plants afloat.

Other We the People reports:

An air quality alert is in effect for parts of the Susquehanna Valley including Lancaster County.

Three weeks after Lancaster County waste officials announced they were scaling back curbside recycling, many residents are still putting banne…

How many untested rape kits are there in Lancaster County? [We the People report]

Without the evidence gathered in a rape kit, Gabriel Valentin-Rodriguez, Antwuan Gomez and Robert Pitt wouldn’t have been charged with sexual …

Pa. air quality by the numbers: Here's how Lancaster ranks against 12 other regions [chart]

An annual accounting of air quality across the United States showed promising results in Lancaster County, which saw a decrease in both smog a…