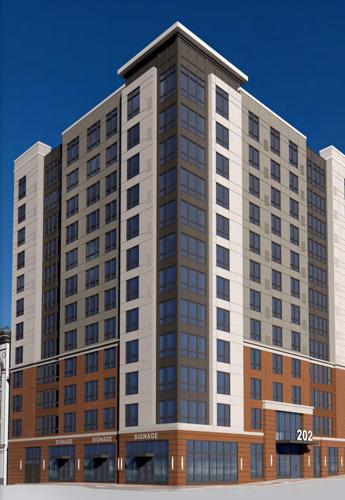 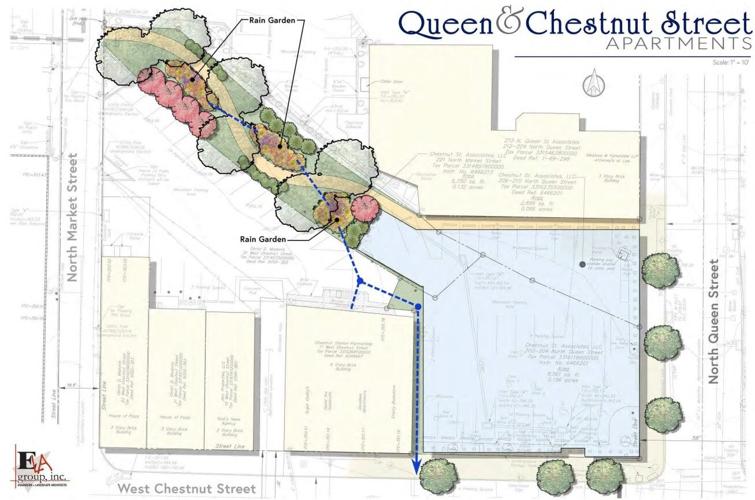 A schematic of a pedestrian walkway and "rain garden" for the 202 N. Queen St. development, presented to Lancaster city's Historical Commission March 21, 2022.

A rendering of the main building of the former St. Joseph Hospital converted into market-rate apartments, presented to Lancaster city's Historical Commission March 21, 2022. 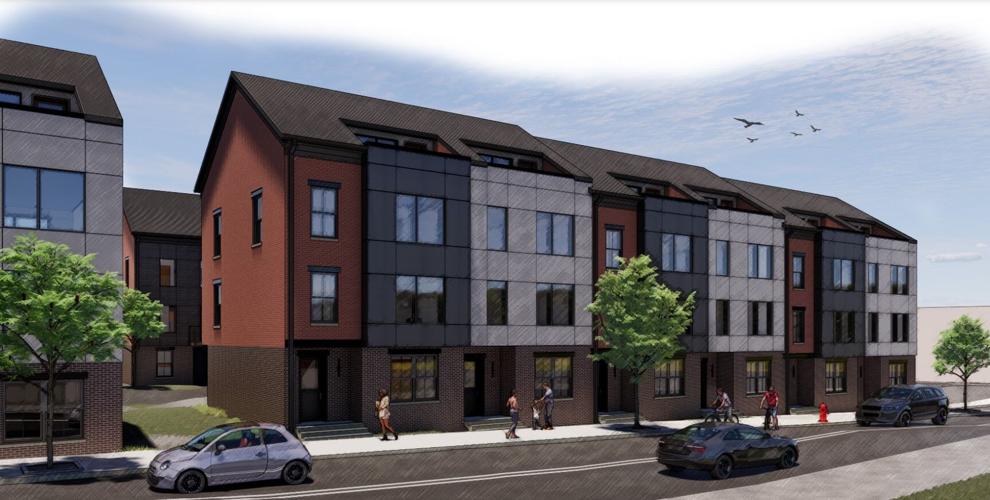 A rendering of townhomes proposed as part of redevelopment of the former St. Joseph Hospital campus.

New details and renderings from three large residential projects in Lancaster city emerged this week, as part of a Historical Commission meeting. The three plans together – the Stockyard Inn site, the former St. Joseph Hospital and 202 N. Queen St. – would bring about 560 new apartment units to the city, most of them “market-rate," meaning with no subsidies or income restrictions to lower rents.

It's the latest sign that residential development activity in Lancaster city remains strong.

Here’s a look at the latest and what’s next for each project.

Baltimore-based Washington Place Equities revealed renderings of its $90 million plan for the former hospital site this week, including brand new townhomes on the east end of the campus. The submission was preliminary and did not trigger a vote from the Historical Commission.

The developer group is overseeing the market-rate portion of the redevelopment project that includes 210 new housing units. Lancaster-based HDC MidAtlantic is planning as many as four different income-restricted residential buildings at the site in as many phases.

The plan from Washington Place to build about 50 townhomes on what was the hospital’s parking lot and retrofit about 160 apartments into the main hospital building, has not changed. But it revealed new details and renderings of the plan for the first time.

“I think folks felt good about the kind of traditional roof style and the more contemporary materials,” said Dominic Wiker, vice president and director of development at Washington Place, of the reaction of commission members at the meeting.

Washington Place plans to initially lease the townhomes, Wiker said, but it was too early to say what the rents may be.

The developer also showed renderings of the main Hospital building to restore some of its mid-century character. Washington Place plans to use a historic building preservation tax credit program from the National Park Service to recoup some of the project’s costs, Wiker said.

As part of that effort, Washington Place plans to remove some additions and features of the 1950s hospital building built in later decades. That includes the former emergency-room entrance overhang on College Avenue.

"The original entrance was originally at the corner of (West) Walnut and College, so we’re going to bring the entrance back to there,” Wiker said.

Lancaster-based developer Ben Lesher returned to the Historical Commission for the third time, after members told him in February his designs at the time for the five-story “The Yards” apartments over-corrected their previous comments to tone done previous designs of the building.

This time, the plan won recommendation to city council, which has the final say on the designs for the $48 million proposal at the 4.6-acre site. The plan currently calls for 216 new apartments between two five-story buildings and 12,000 square feet of commercial space.

Lesher said in February his goal is to offer 20% of the development’s units below market rate, at 60% of area median income – a federal metric used to establish thresholds for which households qualify to rent units with income restrictions. For the Lancaster metro area, 60% AMI for a family of three in 2021 was $44,820.

The development’s new designs incorporate more brick in the façade and also have more recesses on the exterior walls to break up the “massing” of the buildings, a term that describes the perceived size and height of the building when viewed nearby.

Over the last decade-plus, builders all over North America have relied on wood framing built over a concrete podium as a cost-effective way to build new, mid-rise apartment buildings.

But Stockyard Inn may now use steel and concrete framing, Lesher said, since the cost is comparable to using lumber now. That could improve sound barriers between units and the building’s fire ratings, Lesher said.

The concrete framing also makes it easier for the building to handle a heavier brick façade that designers incorporated to improve the look of building’s exterior, Lesher said.

The new renderings also show perspectives from Lititz Pike and the Thaddeus Stevens Bridge, which the Historical Commission has referred to as a “gateway” to the city. The images evoke a more urban, residential environment in what has primarily been an industrial and vacant area for years.

Lesher said his team plans to submit a land development plan to the city within the next couple months.

The Historical Commission also recommended to city council revised plans for the 12-story building proposed at the site of a surface parking lot at the corner of North Queen and West Chestnut streets.

Wayne-based Berger Rental Communities had originally proposed a 16-story $45 million building in 2020, but revised it to 12 stories in August, according to a project description it submitted to the commission. The updates this week featured modest changes to the exterior of the building, choosing to eliminate apartment balconies and use a wider portion of the building in the lower floors to create a communal rooftop space for residents.

The new plans also include a pedestrian walkway to connect North Market Street behind the site to North Queen Street. It would double as a “rain garden” with trees and plants to improve stormwater drainage.

The current building plan calls for 142 one- and two-bedroom market-rate apartments and 2,800 square feet of retail space on the first floor.

A spokesperson for Berger said the firm hopes to break ground at 202 N. Queen St. by the end of the year, and complete construction by the end of 2023.

Within a half-hour of a special Manheim Township board of commissioners meeting, only one me…

Lancaster County could have a new jail up and running and soon as late 2026, according to a …

'Bland' Stockyard Inn proposal to get another chance with Historical Commission

A Q&A with Eric Sauder on places2040 Summit

The first-ever places2040 summit, an all-day conference focused on planning and growth policies for Lancaster County over the next two decades…

Three people were displaced after an East Lampeter Township home was damaged by fire early Sunday morning, according to Witmer Fire Company.

'Smart growth' conference looks ahead to Lancaster County in 20 years

One statistic stood out the most, judging by how often it was repeated throughout the day.

The Lancaster-based nonprofit developer involved with the redevelopment of the former St. Joseph Hospital campus announced Monday it received …

Plans for a $59 million apartment complex on the site of the historic Stockyard Inn are moving forward. But the project continues to face oppo…