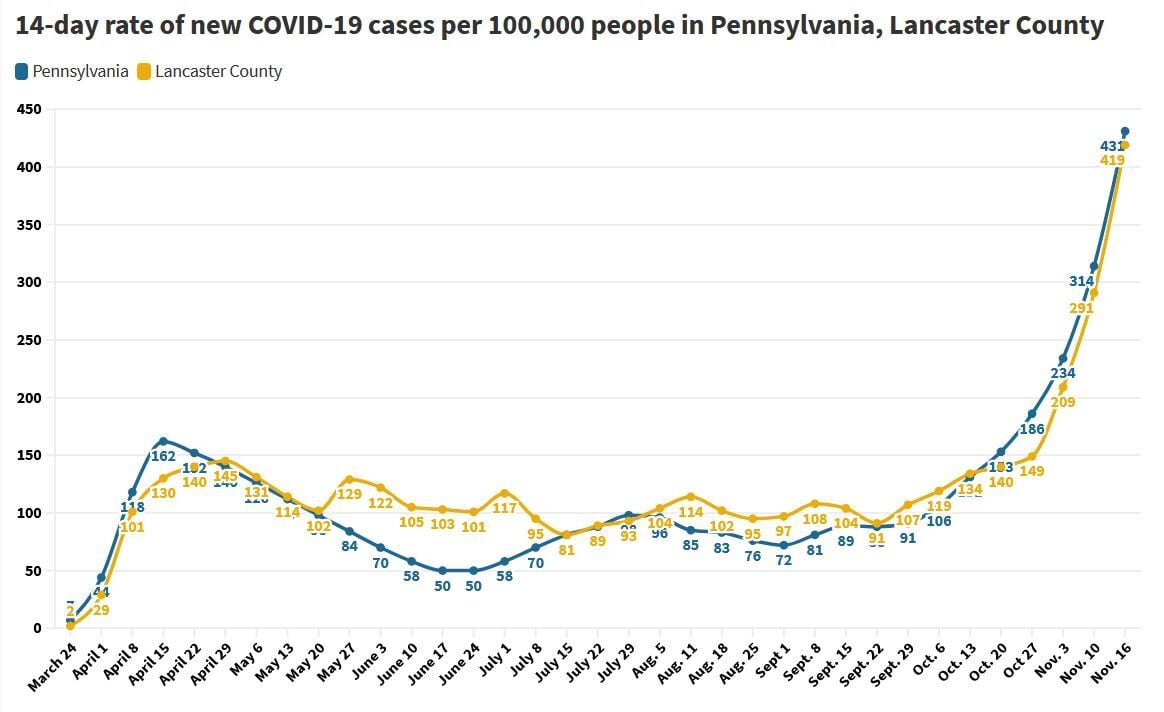 This chart shows the 14-rates of new coronavirus cases per 100,000 population in Pennsylvania and Lancaster County from March through Nov. 16, 2020.

The coronavirus pandemic is surging aggressively throughout Pennsylvania, but it is counties west and north of Lancaster that currently have the state’s highest per capita rates of new cases.

Bedford, Mifflin and Blair counties topped the list for the past week.

Over the past seven days, Lancaster County’s rate of new cases has been just below the state average, ranking it 36th among the state’s 67 counties.

The bad news is that rates climbed in 63 of those 67 counties, and Lancaster’s rate — like those in most counties — jumped substantially.

Here are 23 places to get a COVID-19 test in Lancaster County, from Elizabethtown to Quarryville

Compare those rates to the three counties west of us that ranked first, second and third for the week.

Bedford County led the state with 599 new cases per 100,000 population. Mifflin was second, at 551, and Blair, which includes Altoona, was third at 529. The other counties in the top 10 are all in the northern half or western half of the state.

Here are the 10 Pennsylvania counties with the highest per-capita rates of new coronavirus cases for the seven-day period of Nov. 10-16, and how that rate compares with the previous seven days of Nov. 3-9. Rates are new cases per 100,000 population:

A West Lampeter Township Turkey Hill is temporarily closed after an employee there tested positive for COVID-19, the company announced Tuesday.

In his job as a pianist and music director, Scott Williams used to routinely play in front of hundreds of people.