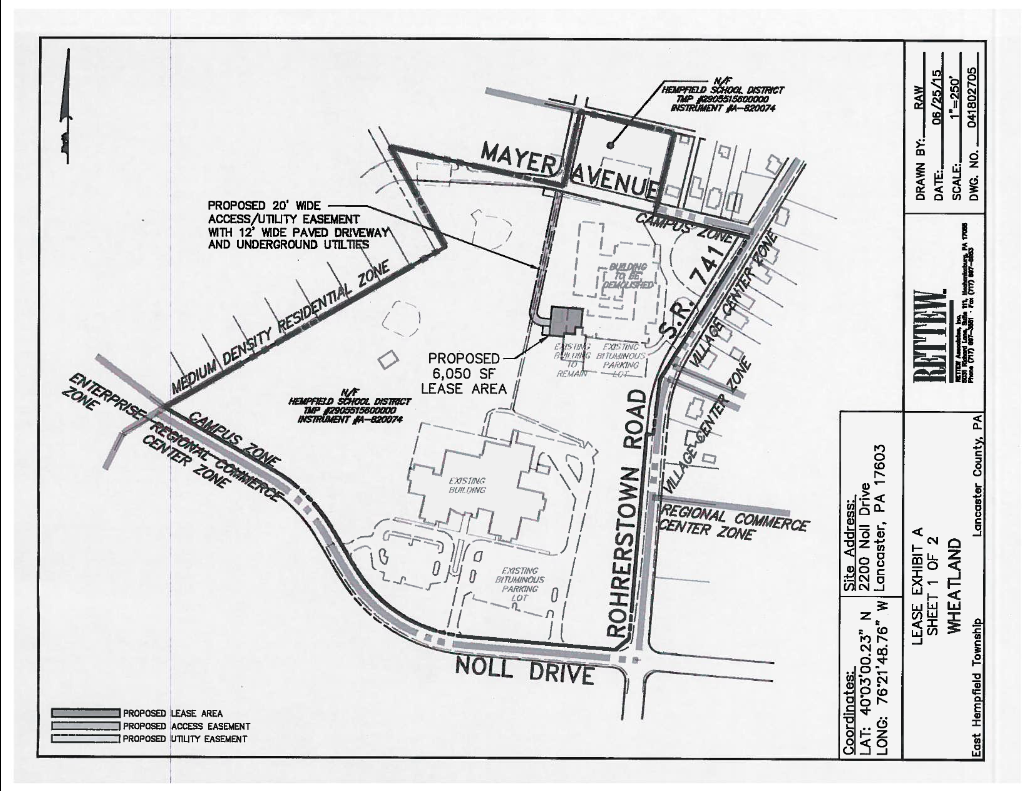 Faced with increasing community opposition, Hempfield has requested a moratorium on Verizon's plan to build a cell tower on one of the district’s elementary school properties.

Construction of the cell tower, approved by the board in May 2015, was expected in the near future behind Rohrerstown Elementary School, which houses about 450 students in kindergarten through sixth grade.

“Why would we opt to put this on an elementary school campus?” East Hempfield Township resident and mother of three Carley Smith said. “It just blows my mind.”

Smith is one of 50 or so residents who have publicly expressed health and safety concerns over the approved site. Despite conflicting studies on the potential health hazards of cell towers and radio frequency radiation, the group says the mere possibility of their kids suffering from long-term health issues should be enough to halt the project.

“Build the cell tower somewhere else,” Smith said. “There are better locations than an elementary school playground to build a cell tower.”

The tower, owned by Verizon Wireless, would take up 6,050 square feet of land, according to a land lease agreement signed by Hempfield School District and Verizon. The 100-foot structure would be placed between the school’s playground and baseball field.

Verizon agreed to pay $24,000 per year to rent the space on Hempfield’s property.

Verizon plans to install up to 12 antennas in three sectors atop the tower. Antennas would transmit 700 megahertz, 1,900 megahertz and 2,100 megahertz signals.

According to an independent study done by Andrew Petersohn — of dBm Engineering, based outside of Philadelphia — the cumulative radio frequency exposure levels at all publicly accessible locations would be at least 100 times less than limits assigned by the Federal Communications Commission.

The FCC first adopted radio frequency guidelines in 1985. Those guidelines were revised and updated in 1996.

Engineering study for Rohrerstown site by LancasterOnline on Scribd

Still, Smith, who works as a safety consultant at her own company and earned a bachelor’s degree in occupational safety and hygiene management at Millersville University, said she is “very, very leery to put our children into this plausible risk,” calling the FCC guidelines “outdated.”

Carpenter has studied issues related to electromagnetic fields for several decades. He currently serves as director of the Institute for Health and the Environment at State University of New York at Albany.

In response to Smith’s request, Carpenter wrote a letter to the Hempfield school board, noting that the radio frequency from cellphones, similar to that of cell towers, can increase the risk of brain cancer, tumors and other serious, long-term effects.

“While the intensity is much less than one would receive holding a cell phone to your head, the emissions from a cell tower are continuous,” he wrote. “Thus the aggregate exposure over time coming from being close to a cell tower can be very significant.”

He also mentioned that, in 2011, the World Health Organization’s Agency for Research on Cancer classified the radiation from both cellphones and cell towers as a “possible carcinogen.”

However, on its website, WHO explains that the effect quickly diminishes with distance, and radio frequency exposures from cell towers at publicly accessible areas — including schools — are normally thousands of times below international standards.

Studies, the website states, have not found any concrete, scientific evidence connecting cancer — or any human health issues, for that matter — and cell towers.

In addition, the American Cancer Society states on its website that there is “very little evidence” that proves cell towers cause cancer.

If his kids, of which he has two, attended Rohrerstown Elementary, he said he wouldn’t be concerned if a cell tower was constructed on school property.

“This kind of exposure is ubiquitous to most modern people in a developed country like ourselves,” Weidinger said, noting the proliferation of smart devices such as cellphones, tablets and watches. “It’s very difficult to directly correlate a source to an exposure and then the exposure to damage.”

Hempfield already has a cell tower on one of its school properties. It currently receives $24,000 a year from Verizon for a tower behind Landisville Middle School.

Out of 17 Lancaster County school districts — including Octorara Area, which straddles Lancaster and Chester counties — four also lease school property for either a cell tower or antenna.

School District of Lancaster gets $36,000 per year for three antennas — at Buchanan, Hand and Hamilton elementary schools.

Manheim Township has two antennas attached to its high school football stadium lights. District officials said T-Mobile pays about $18,000 per year for one; Verizon pays $21,000 per year for the other.

Columbia Borough also has an unspecified number of towers on their school properties, according to the district.

VW Letter by LancasterOnline on Scribd

A week later, board President William Otto followed up with another letter to Verizon, urging the company to respond and asking Verizon not break ground on the project until the information requested by Adams was sent.

Verizon has not yet responded to Hempfield’s inquiry.

As of Monday, Verizon has not applied for the necessary permits from East Hempfield Township to begin construction.

Manheim Township is one of nine local school districts that feature contested races in the Nov. 7 general election.

Facing mounting pressure from the public, the Hempfield school board brought in experts this week to help determine the risk associated with cell towers on school district property.

Tonight: Hempfield school board to vote on controversial cell tower

Nearly three years after approving its initial lease agreement with Verizon Wireless, the Hempfield school board may prevent the tech company from building a controversial cell tower on school district property.

By an 8-1 vote, the school board granted an easement and approved two amended lease agreements with Verizon, removing two of the remaining obstacles between Verizon and construction of the tower.