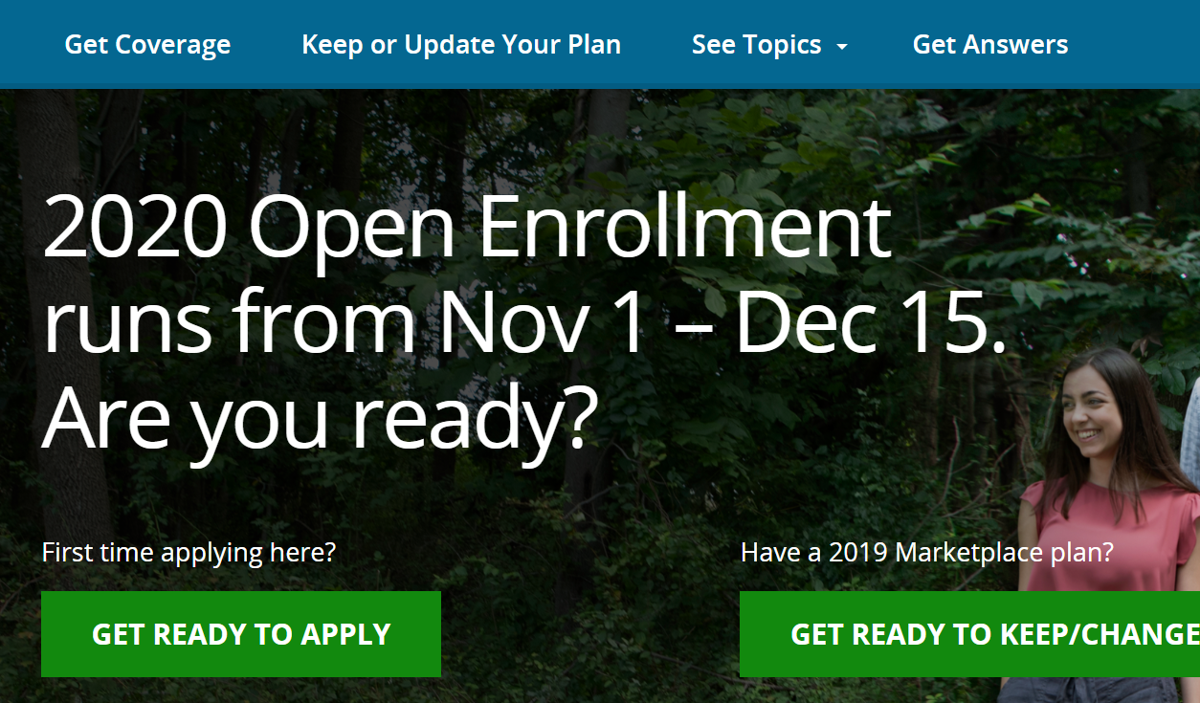 This screenshot of healthcare.gov's home page was taken Oct. 18, 2019. 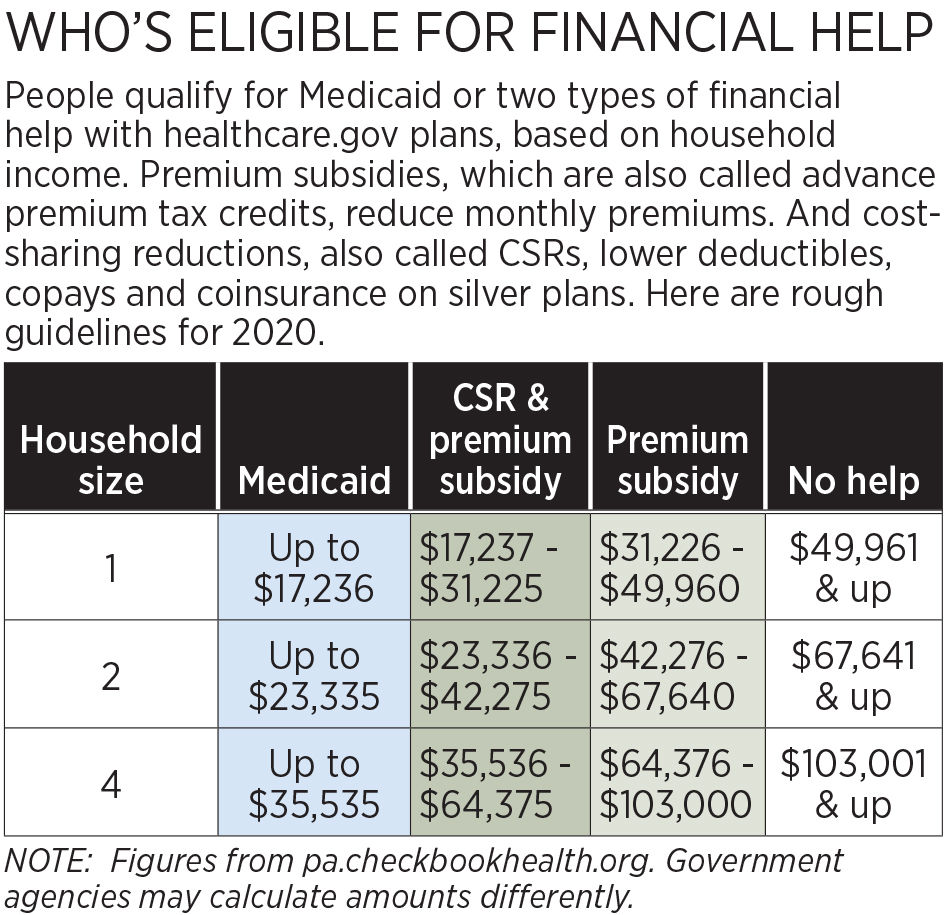 Next year’s plans for Lancaster County residents who buy their own health insurance have been finalized, and it’s a mixed bag.

There will be a lot of new options when enrollment begins Nov. 1. Some will be cheaper than 2019 offerings, but those will generally exclude some area health systems.

Federal premium subsidies will be down a bit. People who want plans that include all area health systems may have to pay more for them. And, depending on age and income, some people may still be able to get plans with $0 premiums but big deductibles.

As always, experts say people may save hundreds or thousands of dollars by shopping around — and suggest starting early and getting help if needed.

“We often hear from consumers who don’t think they would receive financial assistance, only to find out that they do,” said Pennsylvania Insurance Commissioner Jessica Altman.

How premiums are changing for 2020

NEW: our detailed, county-level analysis shows how #ACA premiums are changing all over the country. https://t.co/opq12juw3p

Low-income people in 85% of counties in the U.S. can qualify for a FREE ($0) bronze #HealthInsurance plan. pic.twitter.com/pYbhug4Yzv

There are two sites to visit: the federal website healthcare.gov, and the state comparison site pa.checkbookhealth.org/hie/pa/2020/.

The state site is currently providing quick online estimates without registration, after just a few questions on things like ZIP code, age and expected household income. The federal site will offer similar “window-shopping” shortly before Nov. 1.

Both sites can also check for coverage of certain medications or doctors, although experts advise confirming network status with providers.

Financial assistance that often amounts to hundreds of dollars a month is available only through the federal site. However, that site doesn’t include qualifying plans offered directly by insurers, which may be cheaper for those who make too much to get financial help.

The state site, by contrast, shows all qualifying plans. Plans not listed on the state site do not meet Affordable Care Act coverage requirements.

There are a lot more plans to choose from — 26 on healthcare.gov for most people, up from 18 this year. That’s not counting “catastrophic plans,” which are only for those who are under 30 years old or have a hardship exemption.

The increase comes from Highmark doubling its offerings.

But Joshua Brooker, CEO of Lancaster-based health insurance agency PA Health Advocates LLC, noted that in some cases, subsidies may result a gold plan having a lower deductible and net premium than silver ones do.

Here’s an overview of networks and changes for 2020.

- Capital BlueCross: All four systems are in-network. It’s making biofeedback therapy an option for certain chronic pain conditions and as an alternative to opioids, adding it to current offerings of acupuncture and spinal manipulation therapies.

- UPMC: In the immediate area, only Lancaster General and UPMC Pinnacle are in network. It's expanding a no-cost wellness program for members who have diabetes or diabetes risk factors.

The below 2-minute video from Pennsylvania Department of Health explains the differences between these types of plans. Healthcare.gov has an explanation too.

Two types of federal assistance are offered, advance premium tax credits and cost-sharing reductions. Some people can get both. See graphic.

It’s important to note that the tax credits, which are also called premium subsidies, are based on estimated income, then reconciled at tax time. Earning just $1 more can require paying back hundreds or thousands of dollars, so it’s important to be accurate — and using IRA contributions to keep taxable household income below the subsidy cap can be helpful.

Where to get help

Pennsylvania Health Access Network has a free helpline at 877-570-3642. And Lancaster Health Center has three counselors who can help people apply, with appointments available by calling 717-299-6371.

In the midst of an awful lot going on in the country, health insurance open enrollment under the ACA starts in a week on November 1. We have dozens and dozens of FAQs to help.https://t.co/PKpsUPjZtu

Leap Of Faith: Will Health Care Ministries Cover Your Costs?

Highmark reports best start of year in its history, with $629M in overall surplus

For the third time in a row, Highmark is reporting the most financially successful first six…

But CMS no longer certifies HCSMs and, since Congress zeroed out the mandate’s penalty in 2017, a new crop of companies, including Aliera, has sprung up. That worries some of the traditional ministries.

Noncitizen immigrants account for only a small percentage of people who use the public benefit programs targeted by the new rule. They make up 6.5% of Medicaid enrollees, for example, and 8.8% of food aid recipients, according to an analysis of census data by the Associated Press.

Lancaster County no longer has Pennsylvania's most expensive healthcare.gov premiums

In 2017 and 2018, Lancaster had the highest healthcare.gov premiums in the state.

Grief Grew Into A Mental Health Crisis And A $21,634 Hospital Bill

Arline Feilen lost her husband to suicide in 2013. Three years later, she lost her dad to cancer. And this February, she lost her 89-year-old …

Welsh Mountain Health Center began as a service to an isolated mountain community and grew to serve people in two counties.

Highmark has granted Carnegie Mellon University $35 million toward the cost of building a new student health, wellness and athletics center on…

WellSpan Ephrata Cancer Center is undergoing a $7.1 million renovation that will add new, state-of-the-art technology as well as feature a red…

The Case Of The ACA’s Disappearing Taxes

It was a moment of genuine bipartisanship at the House Ways and Means Committee in October, as Democratic and Republican sponsors alike praise…

It’s Obamacare Season. Here’s What You Need To Know.

During Wednesday night’s Democratic presidential debate, candidates touched on “Medicare for All,” “Medicare for all who want it” and other wa…

What Would Happen If The ACA Went Away?

If the ACA is invalidated, the health system will likely change in ways that no one can predict.

The Trump administration has extended healthcare.gov sign-ups for a brief time because of difficulties some people experienced close to the or…

NEW YORK — As the coronavirus spread silently through New York City early this year, Deborah Koeppel had an appointment with her cardiologist …

Some Lancaster County residents who bought their own health insurance for 2019 will soon be getting big rebates in the mail.