A protest is being planned for early Sunday morning in front of the Lancaster Bureau of Police building after three demonstrators were arrested on Wednesday.

Green Dream, a group that describes itself as “a non-profit civil rights organization,” made a post on Facebook telling people to meet in front of the police station at 5 a.m. Sunday, wear all black and cover their face and skin completely for a “#BLACKOUTSUNDAY.”

The arrests began around 4:05 p.m. while the group was standing in front of state Sen. Scott Martin’s office.

First, police said a woman moved into West Chestnut Street while holding a sign and was arrested. Jessica Lopez confirmed in an interview that she was the first person arrested. Police said they gave “numerous” warnings before the arrests.

All three were charged with obstructing highways and other public passageways, which is a third-degree misdemeanor, according to police.

Lopez, who was the first demonstrator arrested, has a pending federal case against Lancaster city detective Nathan Nickel for allegedly sexually assaulting or hurting her after a Nov. 8, 2018, traffic stop.

According to Davis, the last of the trio to be arrested, the original police release about the arrests was “very inaccurate.”

According to Lopez she was initially standing in an unoccupied parking space in an effort to socially distance herself from demonstrators on the sidewalk when an officer approached her and asked her to move onto the sidewalk.

“I said ‘no, why do I have to stand on the sidewalk?’ I was not doing anything illegal, I was not obstructing any traffic at that point,” she said.

Lopez said she then moved into the street and sat down in protest and in fear, partly because she was concerned about being accused of resisting arrest. From her understanding, the city told demonstrators early on that they could block one lane of traffic, as long as vehicles could move past them.

Lancaster Bureau of Police public information officer Lt. Bill Hickey said that protesters cannot be in the middle of the streets “at all. Whether it’s one person or 100 people.”

A Facebook live video posted by Jontel Toland starts with Wolfe, the second person arrested, being handcuffed by police while sitting in the right lane of traffic — following Lopez’s lead. Wolfe is then escorted into the Lancaster police department, while protesters argue with the officers. Davis can be heard yelling “we’re all in the street,” at the arresting officers.

The 12 minute video also shows the moment Davis is arrested — while standing in the middle of the street after the demonstrators moved across Chestnut Street to speak with officers about the previous two arrests.

(The Facebook live video of the arrests is linked here. The video contains profanities and racial slurs.)

“I was really angry,” Davis said. “I screamed a lot. It was an emotion-filled time. Because it hurt a lot.”

Davis said he was processed by the department and back to demonstrating within hours.

“They released me and I came right back out to the protest,” he said. “And that’s where I was until after midnight.”

Issac Etters, co-founder of Safe House, an advocacy and education organization established after the first couple of days of protests in Lancaster city in early June, said that he wanted a better explanation for why the three people were arrested.

"If anything, I’m concerned that people are getting arrested and being processed and fined for things they were doing a month ago that they weren’t getting (the same punishment for)," Etters said. "I’m very interested in why the change of action (from the police)," he added.

Lopez said that demonstrators stepped into the street at times for pictures and stood in unoccupied parking spaces to hold banners, but accompanying officers didn’t say anything. According to her, this has been typical of protests in the past, as well.

“So why me, why then, why now?” Lopez asked. “Yes, I could have complied and just got on the sidewalk, but what does that change? That just makes him think that he can walk up to someone else and tell them some unnecessary (order).”

Etters said he spoke with Mayor Danene Sorace on Thursday to figure out how to create the safest path forward for all involved.

The mayor's office did not respond to a request for comment on the arrests as of Friday afternoon.

Police said that officers met with organizers of the demonstration as protesters gathered around 2 p.m. and “provided them with guidance to exercise their First Amendment Rights, while remaining in compliance with the law.”

The guidance included a sheet titled “Guidelines for demonstrations,” which notes as its third point that “demonstrators shall not block the sidewalks, street or private driveways, or entrances to any private or public place.”

Hickey said Thursday afternoon that summons have yet to be sent to the three individuals and as of Friday, nothing was found in the state's online court system.

'The uniform itself brings so much fear': Activists call to defund, disarm police while chief offers warnings 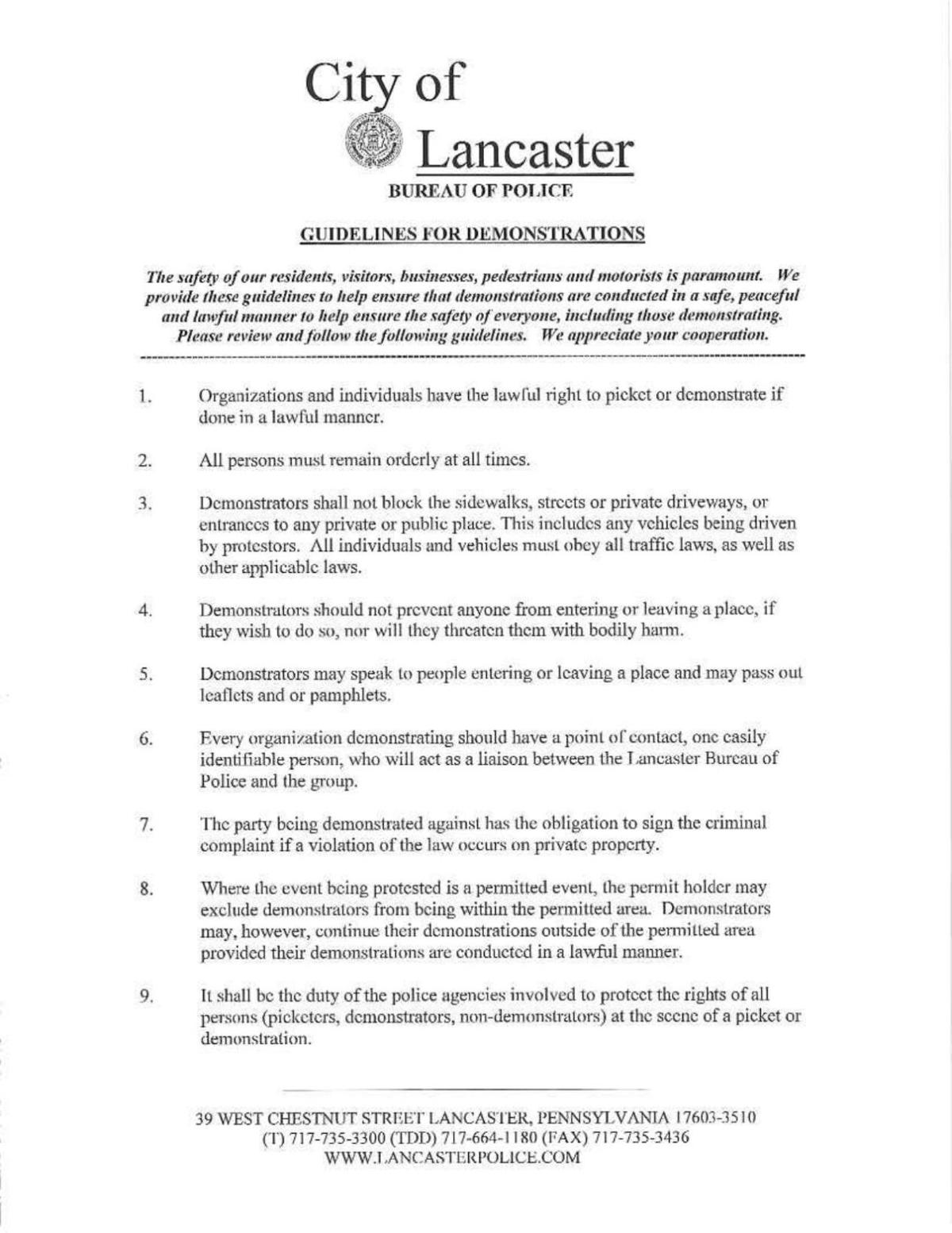 Disney to lay off 28,000 at its parks in California, Florida

The Lancaster Bureau of Police has announced it will hold a press conference Saturday at 3 p.m. alongside local faith based leaders to address…