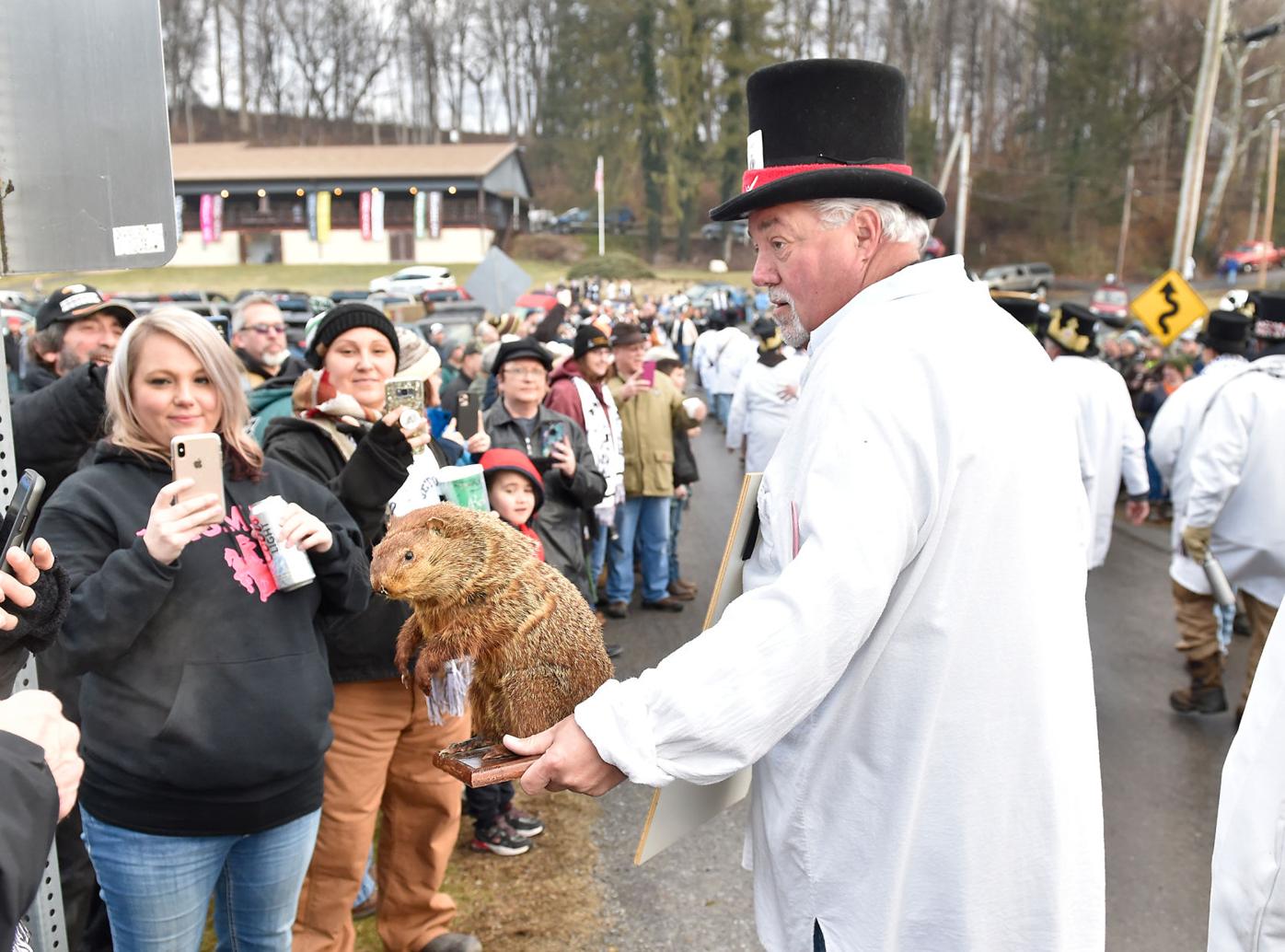 Don Helsel walks from the covered bridge with Octorara Orphie during the parade at the Slumbering Groundhog Lodge of Quarryville on Sunday, February 2, 2020. 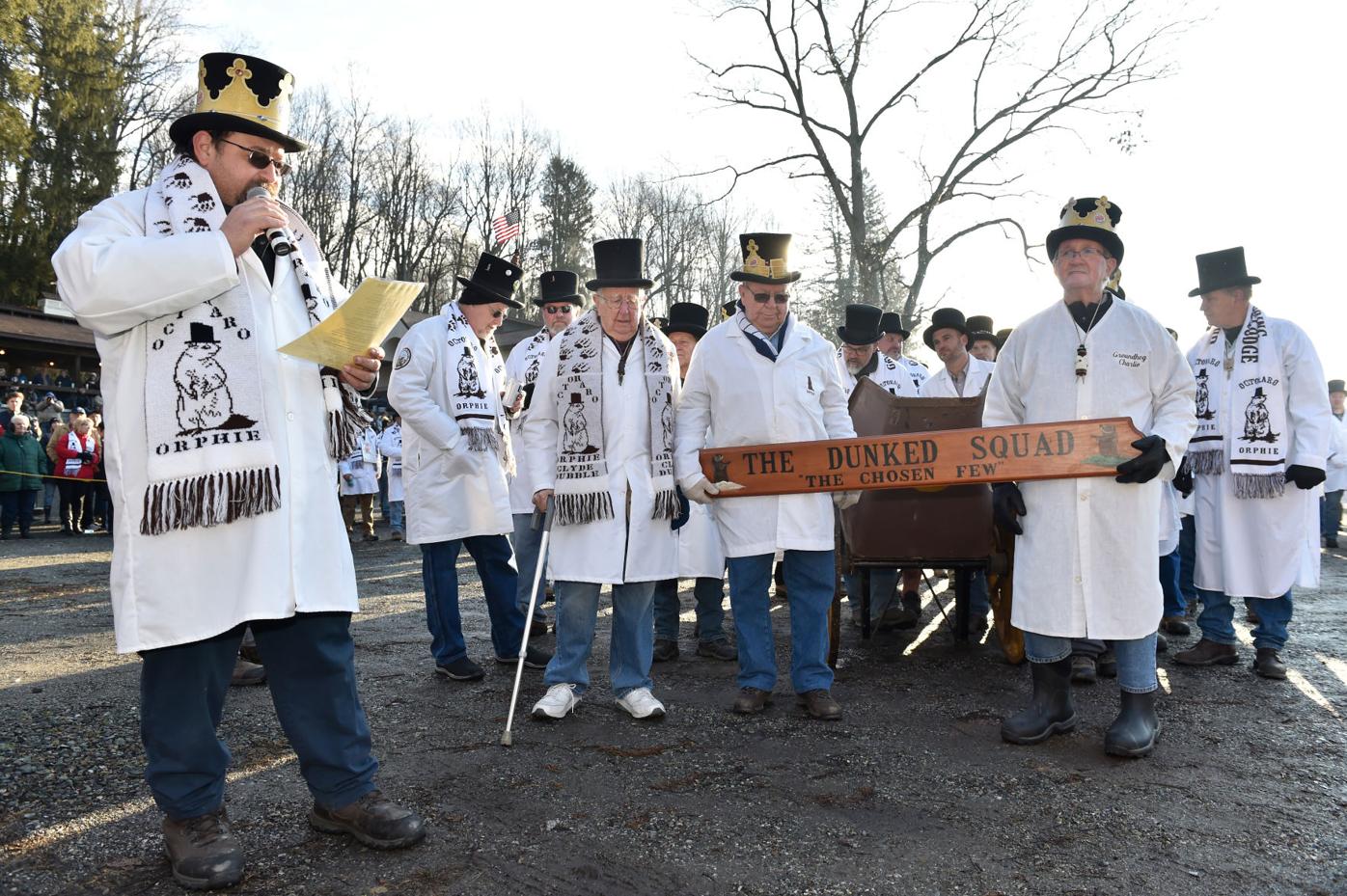 Greg Schneider, left, of the Dunked Squad gives their report to the Hibernating Governor during the Groundhog Day festivities at the Slumbering Groundhog Lodge of Quarryville on Sunday, February 2, 2020.

Don Helsel walks from the covered bridge with Octorara Orphie during the parade at the Slumbering Groundhog Lodge of Quarryville on Sunday, February 2, 2020.

Greg Schneider, left, of the Dunked Squad gives their report to the Hibernating Governor during the Groundhog Day festivities at the Slumbering Groundhog Lodge of Quarryville on Sunday, February 2, 2020.

Editor's Note: This story had been updated to include comments from Slumbering Groundhog Lodge officials.

In 2021, Octoraro Orphie will not be predicting whether spring will come early.

Quarryville's yearly Groundhog Day celebration, held at the Slumbering Groundhog Lodge, has been canceled due to the coronavirus pandemic, according to a press release from the organization.

"While we are disappointed that we won’t be gathering along the banks of the Octorara Creek this year, we look forward to welcoming our members and valued guests to the 114th observance in February of 2022,” said Rick Rankin, Chairman of the Board of Hibernating Governors of the Slumbering Groundhog Lodge of Quarryville in a press release.

William Forrey, a spokesperson for the Lodge, noted that the event held every Feb. 2 typically brings in several hundred spectators, the safety of whom could not be guaranteed.

All other events at the Lodge have also been canceled due to the pandemic, Forrey said.

“We’ve taken it very seriously,” he said. “We have a lot of older members.”

The decision to cancel the event, which would have been the 113th edition of the annual celebration, was decided unanimously by Lodge board members last month. Rankin said alternative options, such as hosting the event through a digital livestream, were also ruled out in deference to tradition.

Valentino's Cafe in Lancaster has also opted against holding its annual Groundhog's Day event this year.

The establishment announced in December on Facebook that it opted to cancel this year's event "in the interest of keeping our community as safe as possible."

The annual event started in 2009 and featured a parade and grew from just a handful of people to several hundred attending to celebrate the day. Valentino’s also has a stuffed groundhog for the occasion, “Vinny Valentino.”

"Even though we’re sure most expected this, there are a lot still wondering if we will host the event this year!" staff members wrote in the Facebook post. "See you all in 2022, Vinny and our staff will be ready!"

Since 1908 the annual celebration has been canceled just once before in 1943 due to the ongoing Second World War.

Rankin said event planners will be raising the bar for next year’s event to make up for the cancelation, though no specific ideas have been outlined.

The Punxsutawney Groundhog Day celebration will be held virtually this year. More information can be found here.

Mount Joy Minnie will come out of hibernation to give her prediction, virtually this year, during the borough’s annual celebration sponsored by Mount Joy Chamber of Commerce and Keystone Lawn Co.

Events will be streamed at the chamber’s Facebook page at 7:10 a.m. Feb. 2. A Crazy Hat contest will be held; entrants should photos on the Facebook event page by 4 p.m., Jan. 29 to be considered for a prize.

'It was easy, it was convenient': First day of free COVID-19 testing clinic at Park City surpasses expectations

Poppy the groundhog will prognosticate (virtually) on Groundhog Day.

Valentino's Cafe has canceled its 2021 Groundhog's Day celebration for the safety of its customers during the COVID-19 pandemic.

How to watch Punxsutawney Phil's prognostication this year

As he has since 1886, Punxsutawney Phil will soon take center stage and determine whether spring is on its way or if winter will stick around …