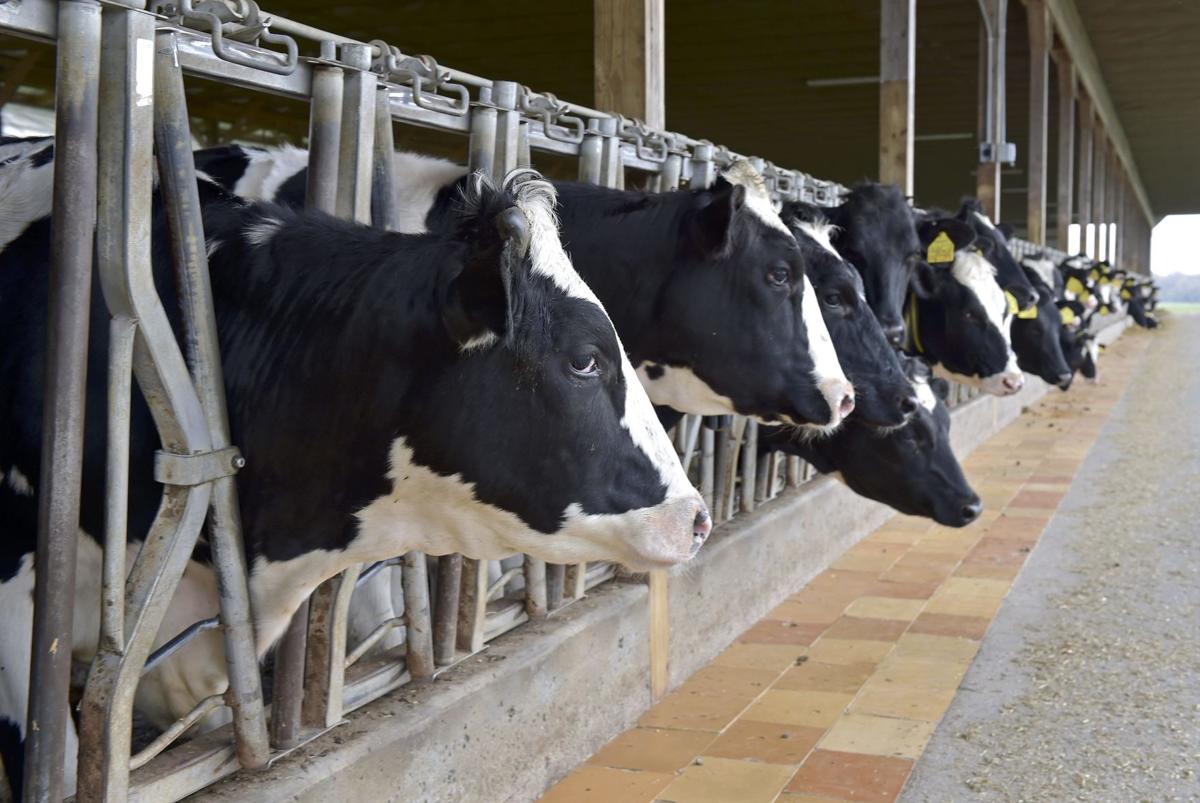 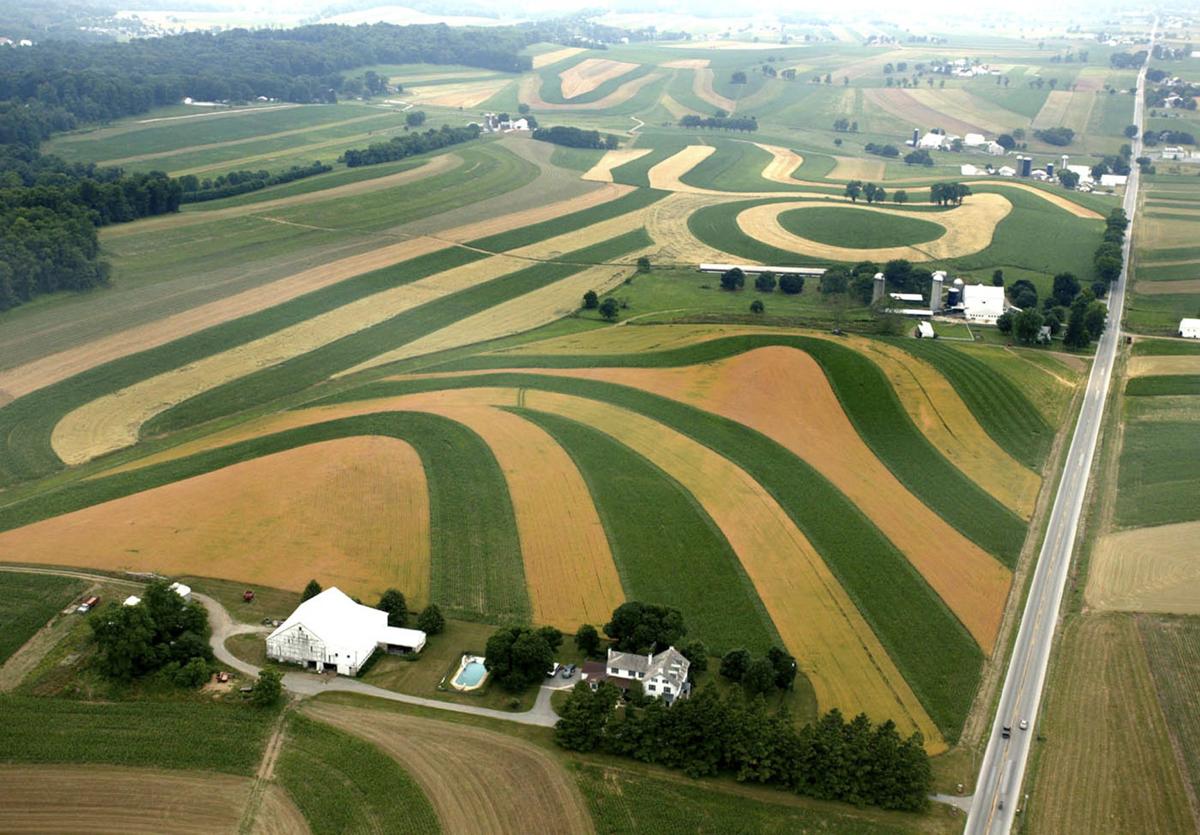 Much of Lancaster County is a patchwork quilt of farmland. 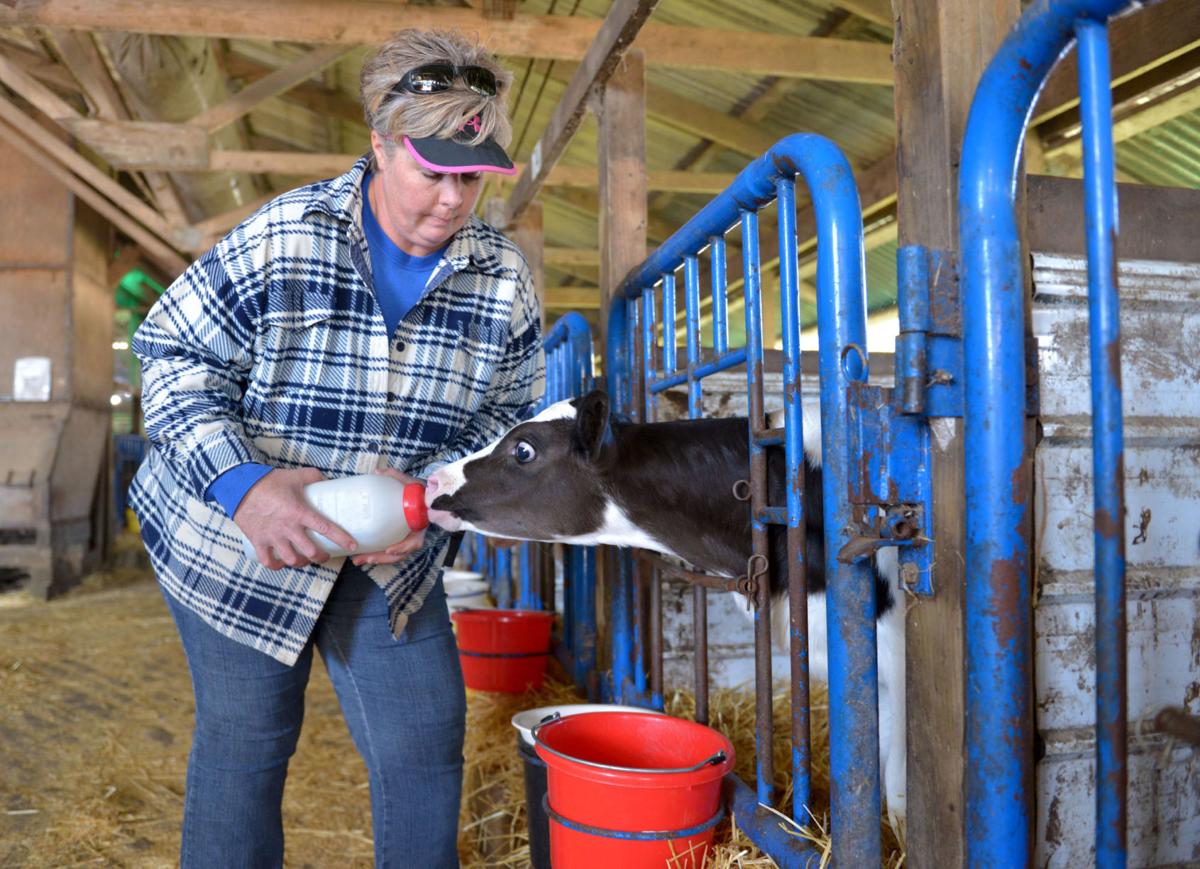 Lisa Graybeal feeds a calf on her Fulton Township farm in this 2015 photo. 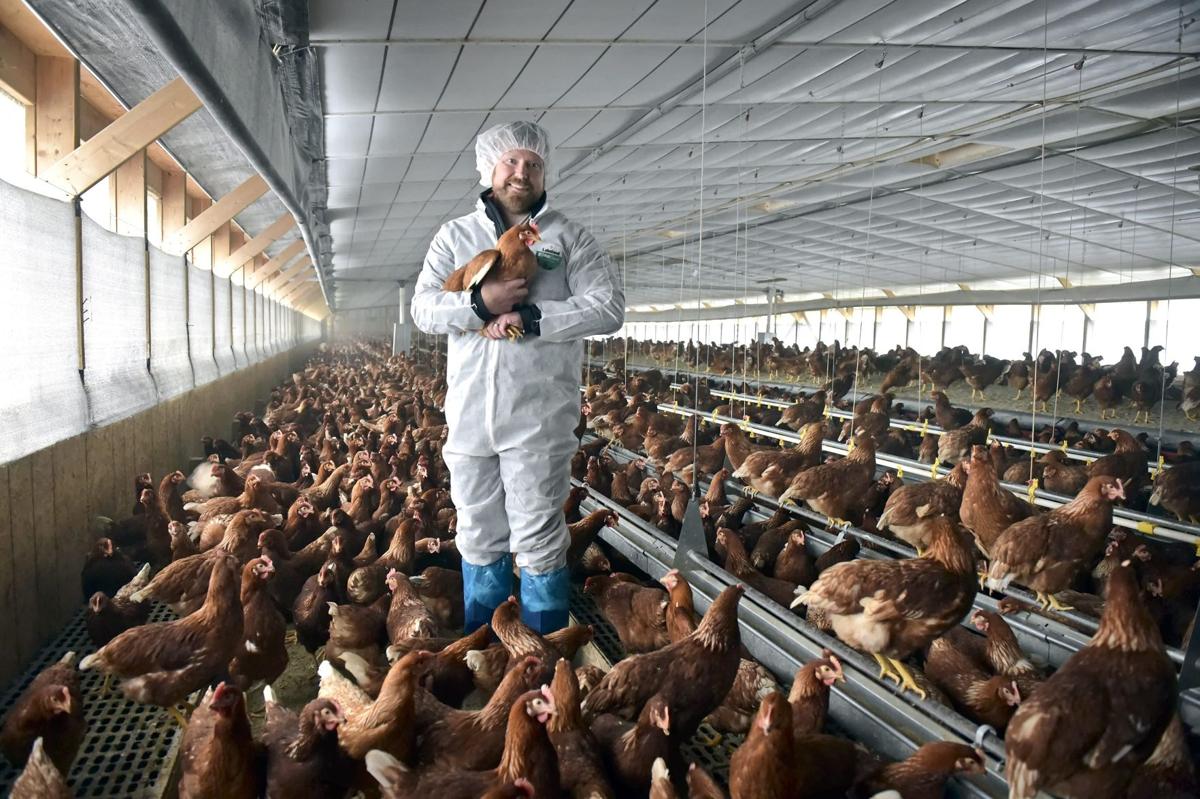 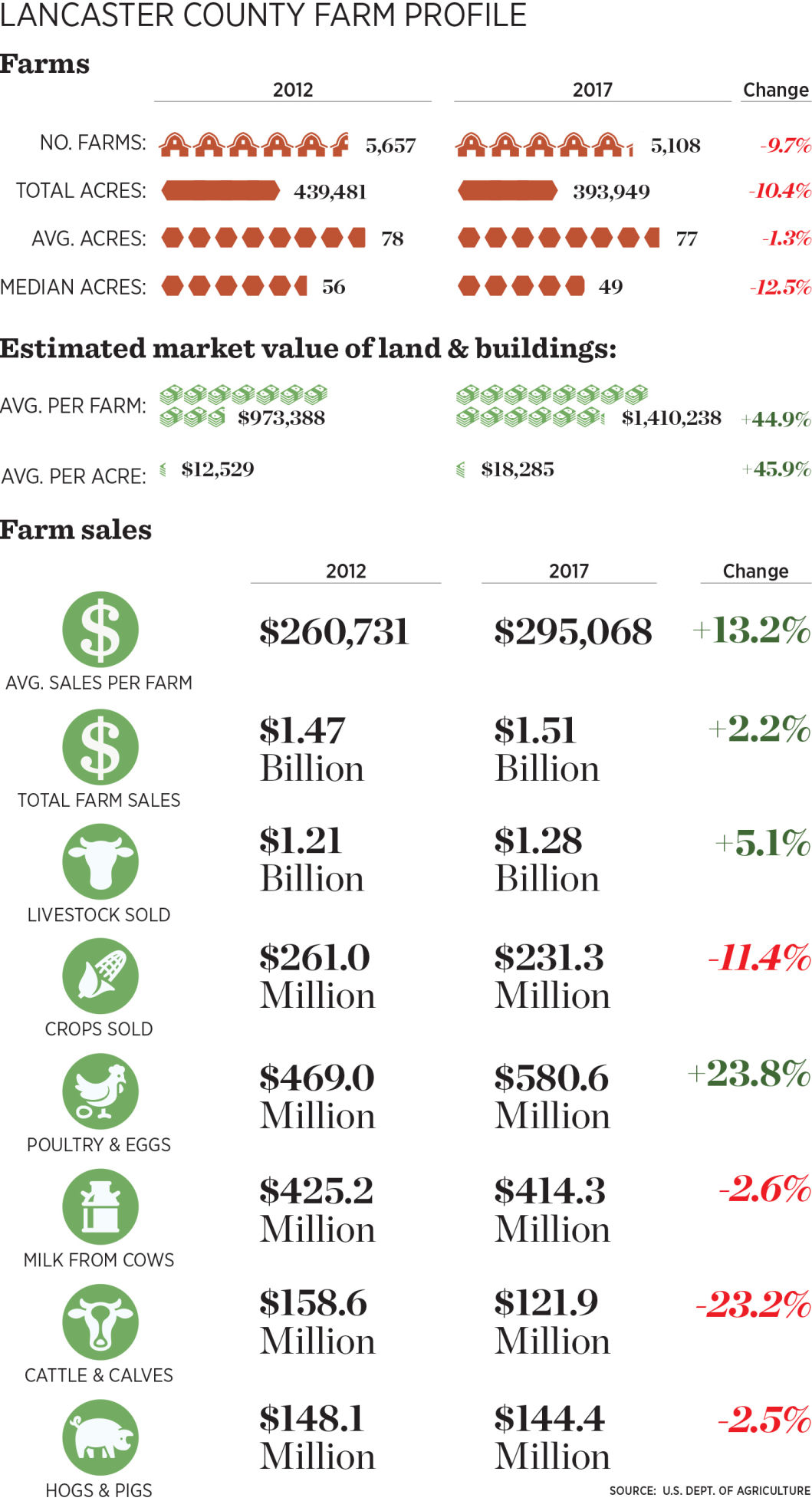 A new snapshot of agriculture in Lancaster County offers evidence of a $1.5-billion industry in transition.

Poultry has dethroned dairy, and the growing gap may already be reshaping the landscape, as in smaller farms with more greenhouses.

The data is found in a once-every-five-years census just released by the U.S. Department of Agriculture.

Farmers and policymakers rely on the numbers to inform decisions from investments to legislation. And those decisions will affect both the size of your grocery bill and the quality of the food on your plate.

The ag census suggests a few cracks in farming’s vaunted place in Lancaster County’s identity. But the industry’s observers aren’t alarmed. At least not yet. They say farmers here know how to take a punch.

“Farmers in Lancaster County are diversifying,” Mauricio Rosale, a dairy expert with Penn State Extension’s Lancaster office, said. “They are creating more enterprises to generate more income. They are resilient, and those efforts are paying off.”

Indeed, there is no reason, yet, for doom and gloom.

Still, there’s reason for concern. Perhaps no takeaway speaks louder than the slowdown in sales of farm products. Total farm sales topped $1.5 billion for the first time in 2017, the year the census reflects.

But the growth from the previous census in 2012 was only 2.2%, or less than one-half percent per year. Sales haven’t kept pace with inflation, likely making farmers long for the good ol’ days of 2007 to 2012 when, despite the Great Recession, sales rose 38%, or 7.6% a year.

What’s more, the census’ number-gathering ended in February 2018 before capturing a key data point: 2018 was the wettest on record. Soggy fields delayed planting and harvesting, and yields suffered.

So are farmers giving up? The census suggests that some are.

Local experts, however, dispute those numbers.

Jeff Swinehart of Lancaster Farmland Trust said some consolidation is happening, but he doubts the county lost anywhere near 500 farms since the previous ag census.

Swinehart also said his organization has tracked farmland losses at about 1,200 acres a year, far below the 9,100 acres a year the census documented.

“It doesn’t make any sense to me,” Standish said. He said his agency’s study found that roughly 13,200 acres were developed in the last 15 years, about 6,000 acres of which are within growth boundaries where development is deemed appropriate.

The pullback from farming has been driven by the hard times for dairy.

“Dairy farming is struggling,” said Lisa Graybeal, a third-generation farmer in Fulton Township with 740 cows. “The cost of doing business is so much more expensive than it was 20 years ago, but our compensation can’t keep up with those prices.”

Where are Lancaster County's largest dairy farms? Are they escaping the dairy crisis?

And with the prices for corn and soy bean in retreat — sales are down 11.4 percent — a focus on crops is not the best option for a farmer selling his cows, Mark O’Neill of the Pennsylvania Farm Bureau said.

Dairy farmers must adapt or perish. Graybeal and her brother, Byron, have explored adding beef cattle. They also are watching with interest the opening of the industrial hemp market.

“While our farms were getting smaller, our sales were increasing,” he said. “I think that really speaks to the ingenuity of the Lancaster County farmer.”

A bright spot in the data is the burgeoning poultry industry.

“Tastes and preferences are pushing this quite a bit,” Gregory Martin, a poultry expert with Penn State Extension’s Lancaster office, said. He pointed to the popularity of low-carb diets that feature the low-calorie, high-protein egg.

Meanwhile, consumers are turning to chicken and turkey over red meat, he said.

But any farmer transitioning to poultry faces large upfront costs for poultry housing and machinery. Martin said the finances won’t work for everyone.

Lancaster County’s problems mirror issues farmers across the country face. Farming has never been for the faint of heart.

“Agriculture has been here before,” George Cook, a Lancaster attorney with expertise in farming issues, said. “The early 1980s was another difficult time, but farmers are resilient people, and the work ethic is strong in our county.”

And Lancaster County’s proximity to the major cities of the Northeast ensures it will continue to be a vital breadbasket to tens of millions, O’Neill of the Farm Bureau said.

“Agriculture is definitely in a transition phase,” O’Neill said, “and all farmers are looking at multiple ways to earn income to keep the farm operations going.”

Tom Baldrige of the Lancaster Chamber said the census’ message of change means agriculture’s vitality can’t be taken for granted.

“Fortunately for us, the one constant is the hard-working farm families who find ways to innovate and adjust to meet market demands and keep agriculture such a significant part of our county’s economy,” he said.

Trump end run around Congress raises questions on his claims

Hopefully you got to enjoy some sunshine and warmth yesterday, as today will be a little different.

No "doom and gloom," but a challenging transition for local farming [opinion]

Industrial hemp is drawing a lot of interest in Lancaster County, and 4 p.m. Tuesday, April 30, is the deadline for those interested in joinin…

The chance to grow industrial hemp is getting a lot of attention here, with Lancaster claiming far more permits than any other Pennsylvania county.

At their first meeting, Don Hoover recalled, Bill Burgess was standing outside in miserable winter weather, engaging attendees of an agricultu…

A southern Lancaster County farmer has been appointed to a new state panel working to solve problems dragging down the dairy industry.