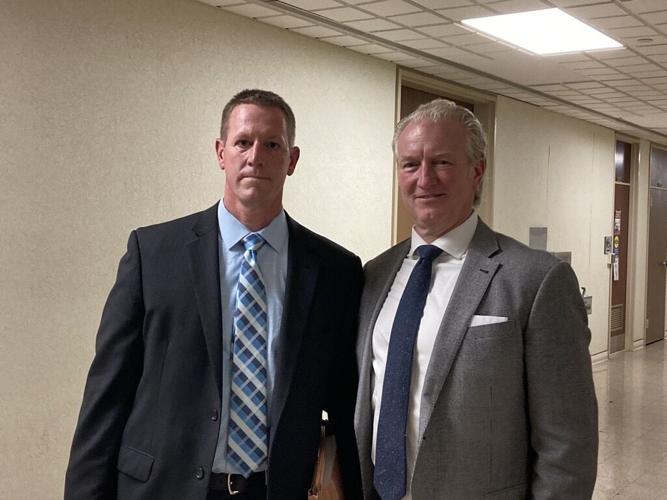 Lt. Nathan Nickel, left, and his attorney David MacMain inside federal court in Philadelphia on Wednesday, Nov. 17, 2021. A federal jury cleared Nickel of accusations that he violated Jessica Lopez's civil rights when he arrested her four years ago. 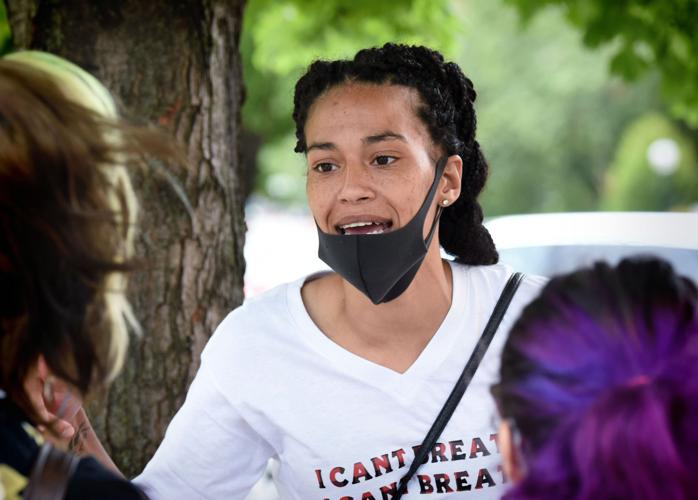 Lt. Nathan Nickel, left, and his attorney David MacMain inside federal court in Philadelphia on Wednesday, Nov. 17, 2021. A federal jury cleared Nickel of accusations that he violated Jessica Lopez's civil rights when he arrested her four years ago.

Lopez, 33, testified Tuesday that Nickel had “slammed” her into a car -- a word that she did not use when she filed her lawsuit two years ago, nor in a 2020 deposition.

Nickel, a 24-year-department veteran, testified Wednesday that he used a "controlled push" to put Lopez against the car when she began resisting arrest. Having her against the car, which was a foot or so away from where they were talking, would make it easier to handcuff her, he said.

Nickel, who has never been sued for wrongdoing before, said he was pleased with the verdict. He planned to return to Lancaster in the afternoon and work.

The case was notable in that it was the first excessive force case involving a city officer to go to trial in at least the past 20 years, if not longer. Around 30 such cases settled with no admission of wrongdoing by the city in the past 16 years.

“When this (Lopez’s allegation) came out, I was in Leadership Lancaster with 100 people that are leaders throughout Lancaster City and Lancaster County,” Nickel said after the verdict. “When this came out on the front page of the newspaper, to say I was embarrassed is an understatement. Gosh, it was appalling.”

Lopez initially claimed that, after the arrest, Nickel groped her breasts on the pretext of a drug search in the back of his patrol car. U.S. District Court Judge Karen Marston, who presided over the trial, threw that claim out in August, finding no evidence that Nickel sexually gratified himself by searching Lopez.

Lopez and her attorney declined comment after the verdict was announced Wednesday.

Lopez made a name for herself as an outspoken critic of police locally during 2020’s protests following the Minneapolis police killing of George Floyd and the Lancaster police shooting death of Ricardo Muñoz. She was arrested twice during protests and is awaiting trial on those charges. She’s also a committeewoman for the Lancaster City Democratic Committee.

In an emailed statement about the verdict, Chief John Bey said, "During his encounter with Ms. Lopez, Lt. Nickel conducted himself in a professional and appropriate manner that was validated by the verdict. I am pleased that, in this instance, the city administration demonstrated unwavering support for Lt. Nickel and the Bureau of Police by not settling this case and litigated it through the justice system. This conclusion has been a long time coming and now we, as an agency and community, can place it to rest and continue moving forward."

The eight-member jury of five white women, one Black woman, one Black man and one white man returned the verdict in less than 45 minutes, including lunch.

On the witness stand earlier Wednesday, Nickel testified that he did not use excessive force.

“It was not a slam. It was not a throw… It was a very controlled push,” Nickel testified.

Nickel and officer Micaela Heckman, who assisted in the arrest, testified that the force used to arrest Lopez was warranted because she resisted.

Lopez had been a passenger in a car stopped by two other officers on the night of Nov. 8, 2017, after the driver failed to use a turn signal. Nickel and Heckman responded as back-up because four people were in the car; it is standard practice to have at least as many officers as people involved, according to testimony.

Nickel approached the passenger side and recognized Lopez, whom he had known from a previous encounter.

“I asked her how she was doing and she laughed. She said the only reason that I was there was because I knew she was in the car, which wasn’t true,” he said, adding none of the officers knew who was in the car when they responded for backup.

The officer who made the stop decided to order everyone out of the car because the officers could smell marijuana and they could see several opened bottles of beer in the car, Nickel said.

“She begins to bargain with me,” Nickel said, elaborating on Heckman’s testimony.

Heckman testified earlier Wednesday that Lopez told Nickel she would give him the marijuana if police would let the other men go.

That went on for a couple minutes, Nickel said, before she offered to hand over the marijuana. Lopez reached toward her bra, but then pulled her hand back and asked again why Nickel was doing what he was doing and again tried to bargain, he said.

When Lopez again refused to turn the marijuana over, Nickel told her he was arresting her and grabbed her hand.

Lopez pulled away and began cursing at Nickel, he said.

As Lopez was turning away, Nickel said he used her momentum and guided her forward toward the car.

In closing arguments, Lopez’s attorney David Berlin told the jury that it didn’t matter that Lopez was a criminal, nor did it matter that she was resisting arrest.

“We have a constitutional injury here,” Berlin argued. “More force was applied than was necessary.”

But Nickel’s attorney, David MacMain, told the jury that its decision on the case could have ramifications on how police would be able to work if they determined that placing someone who is resisting arrest against a fixed object to control them constituted excessive force.

Jessica Lopez has been accused of multiple crimes over the past dozen years.

Lancaster County elections workers on Wednesday began recounting more than 100,000 local ballots for a statewide judicial race where the winni…

When Lancaster police arrested Jessica Lopez at a protest last year, it wasn’t because of her activism, or that she was suing a city officer, …

The city spent $33,884 of taxpayers’ money to successfully defend a police officer accused of slamming a woman into a car during an arrest, LN…

Jessica Lopez, the Lancaster city woman convicted earlier this month of riot and related crimes stemming from her actions in downtown Lancaste…