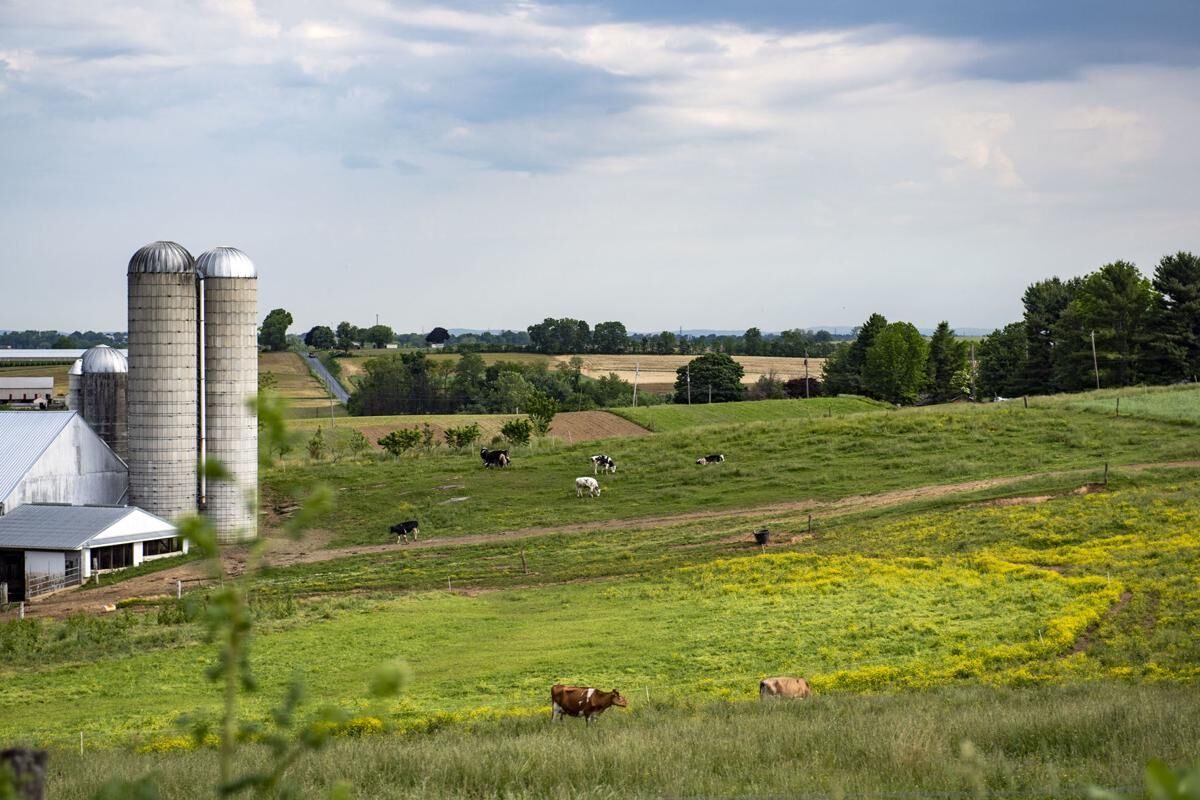 Cows graze at a farm in southern Lancaster County in 2019. 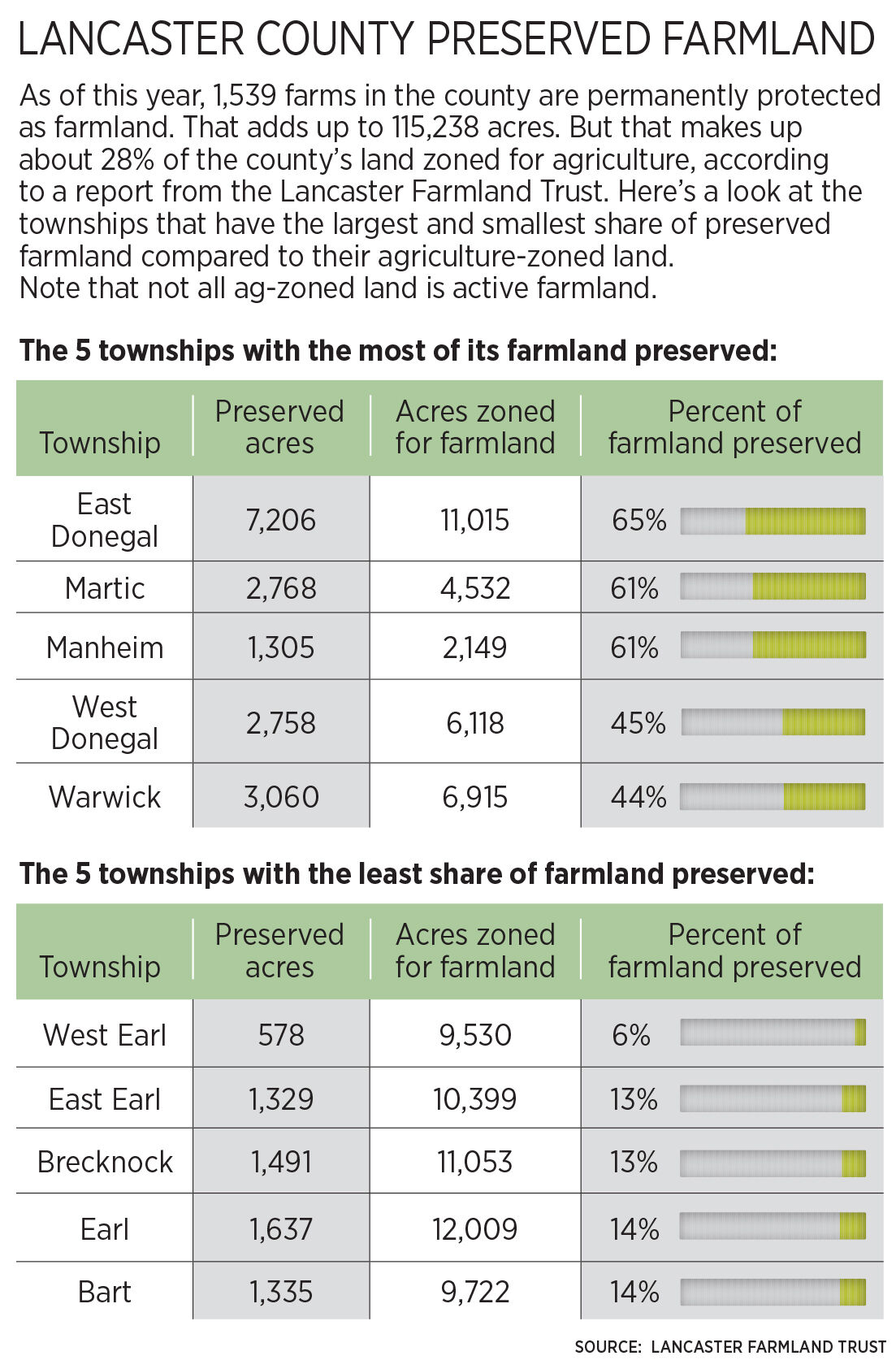 Cows graze at a farm in southern Lancaster County in 2019.

For 40 years, Lancaster County has been a trailblazer in farmland preservation, but a new report from the Lancaster Farmland Trust released Wednesday says declining levels of local-government funding and encroaching suburban development are threatening long-term progress.

The report, titled “The State of Farmland Preservation in Lancaster County,” claims the county is losing farmland each year largely due to a growing population, and recommends county officials devote $125 million to farmland preservation by 2030 – about the total amount local officials allocated in the previous 37 years, according to data from the report.

Such a large increase in funding from the county would follow a recent decline, according to the report. Between 2010 and 2020, the county’s funding to preserve farms dropped by 40%, the report says. In 2021, such funding totaled about $2 million.

It’s part of an ultimate goal to double the 115,238 acres already preserved by 2040. That would account for more than half of all land in Lancaster County zoned for agriculture, according to the report.

“We know that growth is coming and we know that we’re losing farmland, and at some point in the future those two are going to come together,” said Karen Martynick, executive director at the Lancaster Farmland Trust. “If we’re not careful and don’t make the right decisions, we’re going to look around and say, ‘What happened? What happened to our farms?’”

Thursday at 4 p.m., the Farm Trust will lead a virtual panel discussion at LNP Studios on the report’s findings and recommendations. A livestream of the event will be available on the LNP|LancasterOnline Facebook page.

In emails, all three county commissioners said they remain strong supporters of farmland preservation and cited the fact that the county has more acres of farmland than anywhere else in the nation.

But that success ironically contributes to the growing challenge to preserve more farmland, according to Liam Migdail, a spokesperson for the Pennsylvania Farm Bureau.

“You have access to really fresh local food, you have these pastoral kinds of views, this rural-type atmosphere that’s also a population center … people want to live there,” said Migdail, who lives in Manheim Township. “So, you have this situation where there’s incredible pressure on that farmland because there’s so much of a push for development.”

For that reason the report also recommends municipal officials, mainly in rural and suburban townships, double down on zoning and planning practices that restrict commercial and residential developments to areas already slated for new development.

The release of the report comes as the LFT delivers a final fundraising push to reach its $7.5 million-goal in a capital campaign started more than two years ago. The organization needs just $600,000 to get there, Martynick said.

The $7.5 million is what’s needed to clear out the trust’s list of 50 farm owners waiting to sell their land’s development rights, which essentially precludes future owners from building on the existing farmland.

Last year the Steinman Foundation announced a $2 million grant to the capital campaign, its largest-ever single contribution. The Steinman Foundation is a local family foundation funded by the companies that comprise Steinman Communications, including LNP Media Group. LFT announced last year that Beverly “Peggy” Steinman, chairman emeritus of Steinman Communications, is an honorary co-chair of the Farmland Trust’s capital campaign.

The county’s Agricultural Preserve Board, which also purchases development rights from farmers, has a backlog of its own, about 200 property owners waiting to strike a deal, according to the report.

“I think I can say this with certainty: there is not another county in the United States where there are 250 farms waiting to be preserved,” Martynick said.

The demand is there, but it’s an expensive undertaking for government agencies and nonprofit groups like the LFT, which assists mainly Plain-sect families who want a preservation option outside the public sector.

The process works through a type of deed restriction called a conservation easement. A farm owner that wants to make sure the land remains farmland in perpetuity essentially sells the rights to develop the land for other purposes to an outside entity like the Lancaster County Agricultural Preserve Board or a trust like the LFT. In so doing, the current owner removes the ability for future owners to build on or convert the farmland to something else.

Because land where a developer can potentially build a new subdivision or shopping center is more valuable than property restricted to farming, buying up those development rights doesn’t come cheap.

According to the report, the Preserve Board has paid on average of about $2,800 an acre over more than 1,000 conservation easements since 1989. Farm owners have to agree to sell their development rights to LFT for well below market value, the report says. The nonprofit has bought development rights through 529 easements for an average of $545 per acre since 1988, and has a maximum purchase price of $1,500 an acre.

All options on the table

The biggest responsibility in protecting farmland lays with municipalities, Martynick said, where officials control land-use and zoning rules in Pennsylvania.

Rural townships in particular are ground zero for the collision of farms and population growth, according to the report. The LFT report cites data from the county’s “places2040” comprehensive plan showing that Rapho, Mount Joy and Penn townships saw the biggest growth in population between 2010 and 2018 in the county.

The report recommends various zoning and planning tools for township officials to use for farmland preservation. One, transfer of development rights, is a program that allows farm owners to sell their development rights to a developer who can then use those rights to build elsewhere with some new privileges otherwise not permitted by zoning. That can be more density than otherwise allowed, or fewer stormwater management requirements, for instance.

Caernarvon, Manheim, Penn, Warwick, West Hempfield and West Lampeter townships have all enacted transfer of development rights ordinances already, according to the report.

Other recommendations for townships include agricultural zoning that limits how many homes or subdivisions can exist on each property. This precludes future owners from splitting up a farm into a new residential development.

The report also highlights Honey Brook Township in Chester County, where in 2005 voters approved a half-percent increase to a local income tax to fund preservation efforts.

Republican County Commissioner Josh Parsons said in an email that Lancaster County’s preservation program is still a leader and that county funding has been stable since he entered office. He said funding has allowed the county to steadily work through the list of people who want to preserve their farms.

“Obviously, we have to balance the cost with the rest of our budget needs,” Parsons said, citing the county’s improved fiscal picture in recent years.

Republican Commissioner Ray D’Agostino pointed to his support of proposed legislation in Harrisburg that would provide private land trusts like LFT with some direct state funding for farmland preservation.

“This is not universally supported around the state because it can be seen as competition for funding,” D’Agostino said. “However, given the close working relationship between the County and the LFT, we would see it as a win-win.” 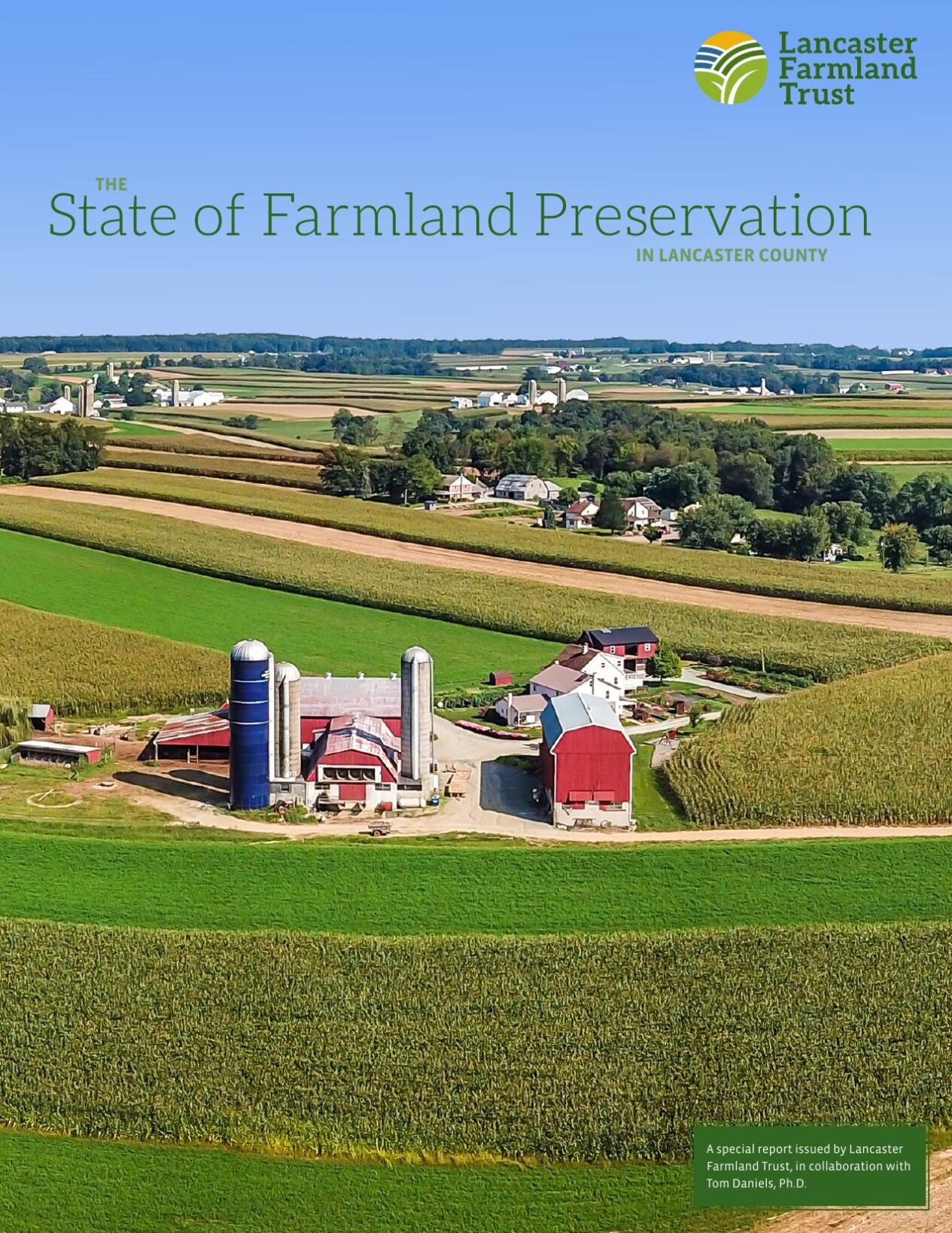 'Make the best of today': Octorara grads show resilience, comfort in fear of the unknown

Watch: Panel discusses the importance of farmland preservation and the threat of suburban development [video]

A Lancaster County farmer accused of repeatedly shirking food safety laws was found in contempt of court this week, when a federal judge ruled…

A major infrastructure bill being debated in Congress could accelerate efforts to upgrade aging bridges in Lancaster County, where just 31% of…

'Overall, I like this plan:' Hotel, KFC gets conditional approval in Rapho Twp.