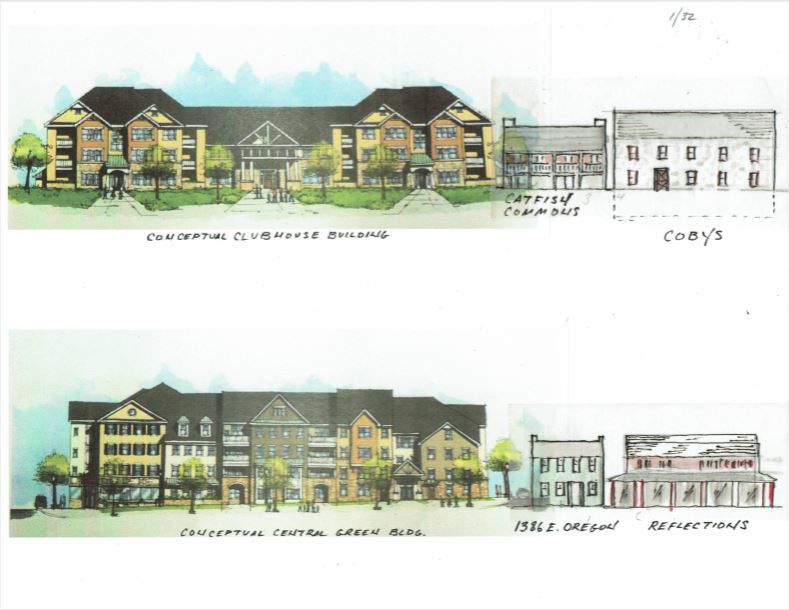 Opponents of the proposed Oregon Village development in Manheim Township created drawings comparing existing buildings in the village, shown at right, to proposed buildings. The drawings show the buildings side by side, but only for comparison purposes. 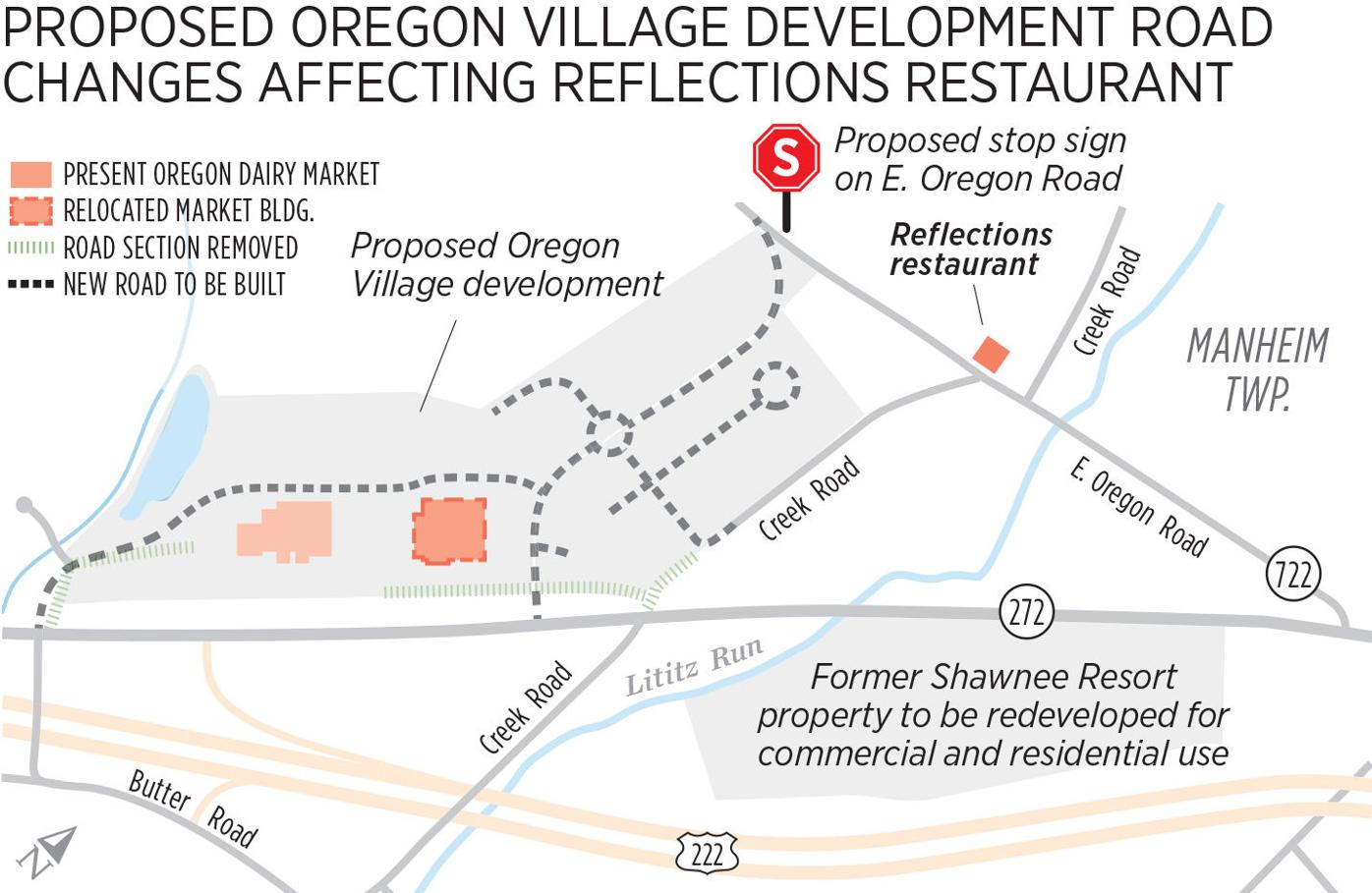 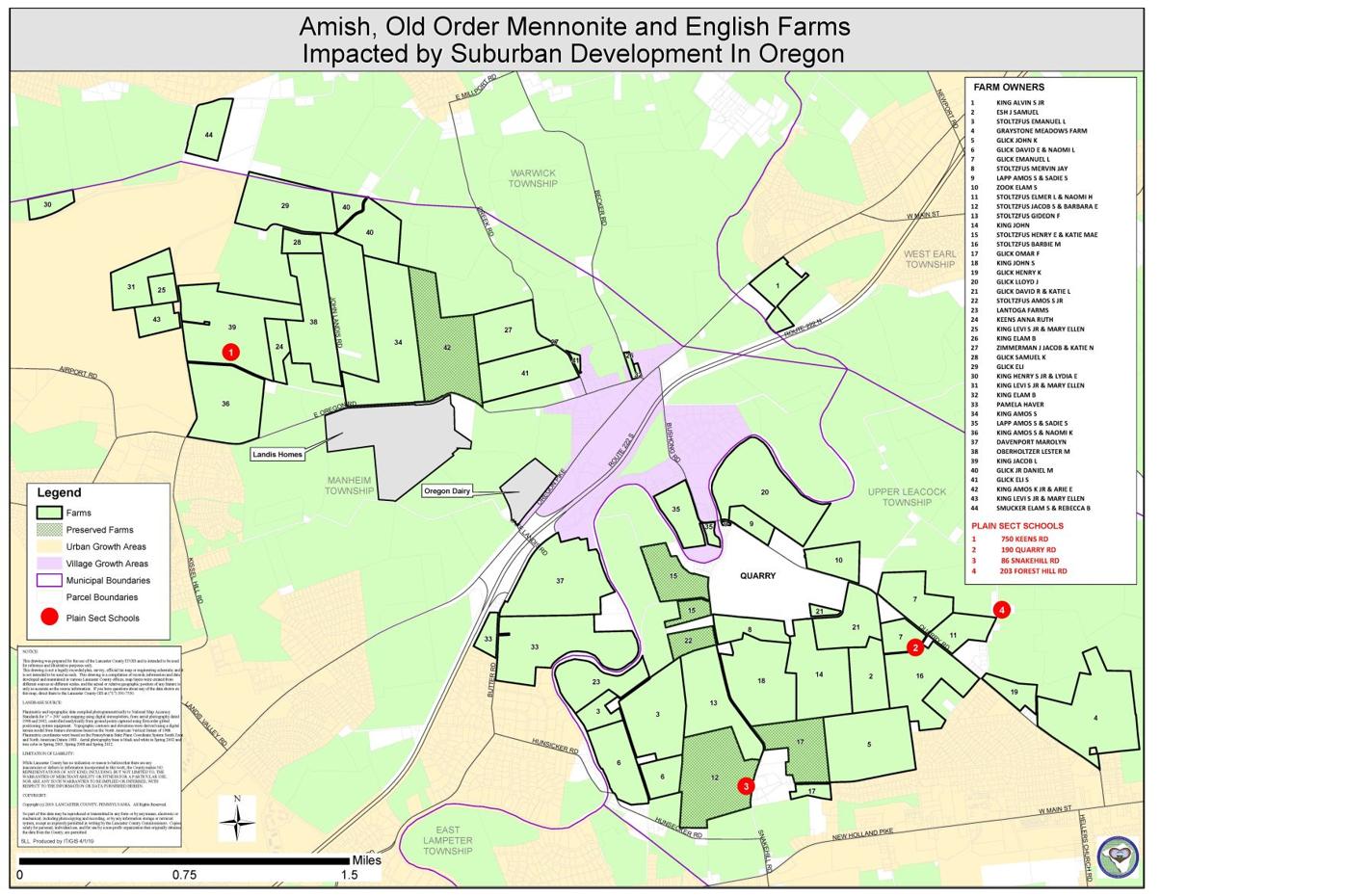 About 40 farms near the village of Oregon are owned or farmed by Plain sect farmers, according to opponents of the proposed Oregon Village development.

Opponents of the proposed Oregon Village development in Manheim Township created drawings comparing existing buildings in the village, shown at right, to proposed buildings. The drawings show the buildings side by side, but only for comparison purposes.

The Manheim Township commissioners also heard an architect describe proposed multi-story apartment buildings and a clubhouse as incompatible with the smaller scale of Oregon’s homes and businesses.

The five-member board of commissioners conducted the seventh session of a hearing to decide if the Hurst family, owners of Oregon Dairy supermarket and restaurant, should be allowed to develop the two-site project as a conditional use.

No decision was made Monday night, and the hearing was expected to resume Monday, April 22.

The developer proposes 554 units of housing, from apartments and townhouses to one-story homes for older adults.

Also planned are a hotel, a supermarket, restaurants and a bank on two adjacent sites: the current Oregon Dairy complex and the former Shawnee resort, both along Oregon Pike near the Route 222 interchange.

“I don’t know how a milk truck is going to get through that circle,” farmer Martin Wenrich said of a proposed roundabout connecting eastbound traffic from East Oregon Road to Creek Road in the heart of his small village.

Wenrich, of Creek Road, said milk trucks with 55-feet-long trailers would have to use the roundabout. In addition, equipment operators bringing in no-till grain drillers that are almost 14-feet wide would have problems.

Wenrich said fire trucks from Neffsville responding to emergencies in Oregon would travel an extra minute because of the roundabout.

Lester Oberholtzer, a farmer from John Landis Road, said he is concerned that new curbing on Oregon Road would force him to drive wide equipment, such as an alfalfa seeder, partially in the lane of oncoming traffic. At present, he said, he can drive partly on the berm.

Oberholtzer, who is a member of an Older Order Mennonite church that uses horses and buggies, also expressed concern about crossing Oregon Pike if it it is widened as the developer proposes.

“If there’s a spooky horse, I think that’s going to be a big issue,” Oberholtzer said of trying to cross widened Oregon Pike, even with a new traffic light. “All my Amish and Old Order Mennonite neighbors would have to do the same thing.”

Earlier Monday, an attorney for the project’s opponents presented a map showing about 40 farms owned or farmed by Plain sect farmers in the vicinity of Oregon Dairy. Four Amish schoolhouses are also nearby, according to the map.

“I think it’s going to have a negative impact on the village,” Oberholtzer said of the development. “Now it’s a crossroads village, and I wouldn’t even consider it a village with this project.”

“I have never seen a village with such density and so many houses,” he said.

Asked by a commissioner about the farmer’s concerns, John Schick, a transportation engineer for the developer, repeated earlier testimony that the roundabout, with 16-feet-wide lanes, could accommodate tractor trailers. He also said the southbound lane of Creek Road would be widened to 14 feet.

Also Monday night, architect David High testified that the proposed buildings were considerably larger than existing structures in the village and had incompatible design elements.

High also said a proposed cul-de-sac, parking in front of buildings, dormers, double windows and other suburban-based development features did not meet the criteria of the township’s ordinance.

The proposed 75-acre Oregon Village development would include $6.2 million in highway improv…

Manheim Twp. commissioners to decide tonight if Oregon Village opponent gets to testify

A decision five months in the making is nearing for Oregon Village, a 76-acre, two-site development of apartments, stores and a hotel proposed…