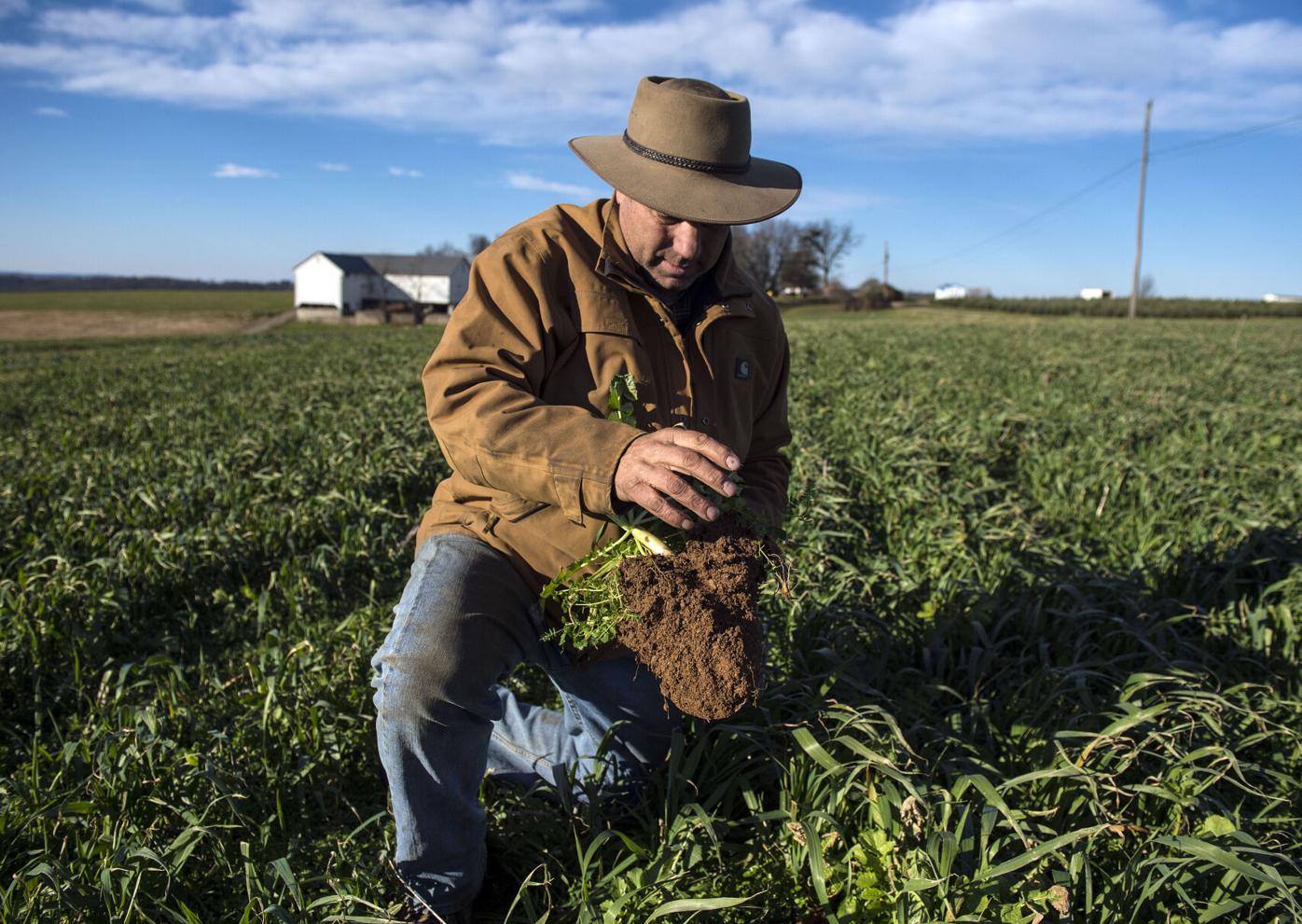 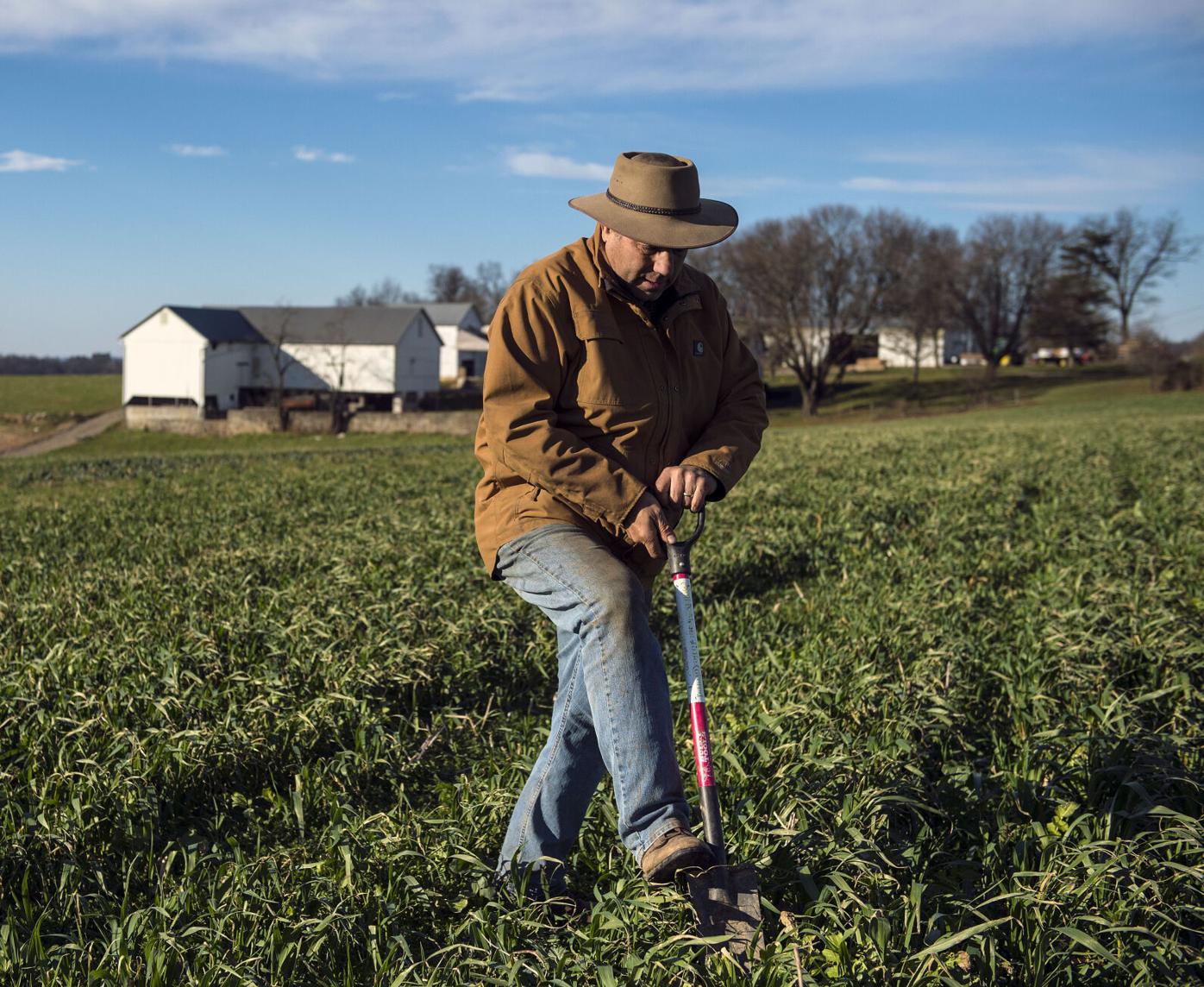 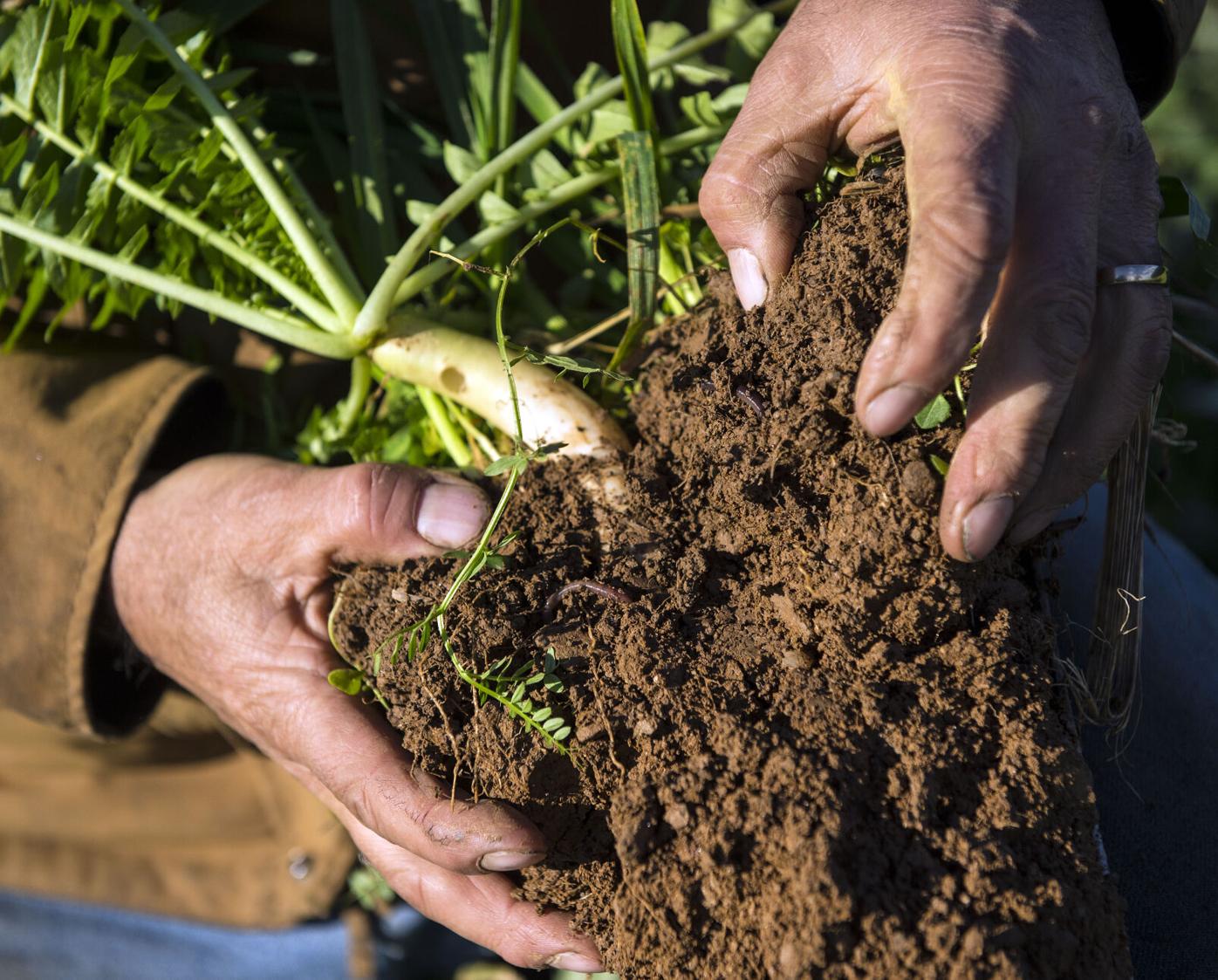 Carrying a long, narrow shovel, Steve Groff walked into a field on his Holtwood farm, pausing when he reached the right spot to thrust the tool into the earth.

With a wiggle, he pulled up to remove a clump of dirt, showing how radish roots held the soil together as earthworms crawled through it.

It was a sign, Groff said, that the field was made up of healthy soil -- soil that can help capture water pollutants, reduce carbon emissions, soak up floodwaters and even produce more nutritious foods.

“It’s like the best of both worlds, really,” Groff said, emphasizing the benefits to both farmers and the environment.

Groff gave the tour of his farm on Tuesday afternoon, just days after the announcement that some Lancaster County farmers are planning to work with the Pennsylvania Soil Health Coalition, a newly created statewide group geared toward promoting conservation-based farming practices.

These are practices that could go a long way toward meeting government-mandated pollution reduction goals in the Chesapeake Bay watershed, according to Lisa Blazure, a soil health coordinator at Stroud Water Research Center. That’s especially true in Lancaster County, where farmers have been blamed for contributing a big share of waterway pollution that ultimately flows downstream to the bay, she said.

Officials at Stroud, based in neighboring Chester County, are spearheading the coalition, which seeks to unify ongoing efforts by more than a dozen soil-oriented organizations, Blazure said.

“We needed some better communication and coordination among all of these different players that were starting these soil-health initiatives,” she said.

For the most part, Blazure said, those initiatives aim to tackle a single issue -- the centuries-old practice of tilling agricultural land, using machinery to turn over and loosen soil before planting.

During heavy rainfall, that loosened soil can easily be washed away, sending dirt and related nutrients into farm-side streams.

In Lancaster County, most of those streams flow to the Susquehanna River and then the Chesapeake Bay, where the nutrients foster oxygen-poor dead zones that choke out wildlife, according to Bill Chain, the senior agriculture program manager for Pennsylvania at the Chesapeake Bay Foundation, which is among the new coalition’s member organizations.

“Anything that benefits local water quality, of course, benefits the bay,” he said.

That means getting away from tilling, Chain said, though he admitted it’s a tall task when dealing with traditional farmers.

“It is a time-honored kind of practice that’s been perfected or glorified over the years,” Chain said. “There used to be plowing contests to see how far and how level farmers could get. It’s historic. It’s been an activity that's really been ingrained.”

That’s where peer-based education comes into play, according to Jim Hershey, an Elizabethtown-area farmer and president of the Pennsylvania No-Till Alliance, another coalition member organization.

On his 500-acre Hershey Farms, the namesake farmer uses specialized equipment that allows him to plant seeds without tilling.

He also plants cover crops after cash crops are harvested, ensuring there are plants in the ground to hold the soil in place during fall and winter rains.

The radishes that Groff showed off at his 200-acre Cedar Meadow Farm were cover crops. He’s turned his expertise into a business opportunity, as the owner of Cover Crop Coaching LLC, another coalition member organization.

Keeping the planting surface intact and secured with roots year-round anchors nutrients and soil particles, securing them not just from water erosion. Healthy soil can prevent organic material from being emitted into the air as carbon, a climate-change driver, Blazure said.

On top of that, the conservation practices promote below-surface habitat, allowing for microscopic organisms and earthworms to thrive and create fertile, sponge-like soil conditions that require less use of fertilizer and pesticides, she said.

That spongy soil can then better soak up floodwaters during heavy storms and retain moisture through periods of drought.

“I have yet to find a downside for soil health. It’s a win for the farmers; it’s a win for the environment; and now we are starting to see that it’s a win for society and the consumers,” Blazure said. “We are seeing that foods and crops that are grown in healthy soils have higher nutritional density.”

Now, she said, it’s the coalition’s job to push for large-scale farmer buy-in, which is why much of its nearly $1 million in funding from the National Fish and Wildlife Foundation has been earmarked for education and outreach. Another chunk is going toward soil-related research, Blazure said. That funding is for a three-year period, she said.

Buy-in is needed because soil work has been included in Lancaster County’s plan to meet regulator-mandated pollution reduction, according to Allyson Ladley Gibson, coordinator for Lancaster Clean Water Partners.

“There is a need to rapidly increase the implementation of these practices,” she said. “The Partners are very excited for the focus on soil health that the coalition will bring to help Lancaster reach nutrient and sediment reduction goals.”

Farmers and other landowners are required to reduce nutrient loads by nearly 12 million pounds by 2025, Gibson said.

Pennsylvania Farm Bureau spokesman Liam Migdail referenced those figures while pointing out that soil conservation practices are growing in popularity and have been supported within the state Farm Bill.

“There is a push now because we are up against some steep goals,” he said, confident that local farmers will adopt the conservation methods. “Farmers want to do what they can to protect the environment to protect natural resources.”

Older adults have needs, of course.

Hundreds of acres of Lancaster County farmland among thousands preserved across Pa. this week

Six Lancaster County farms comprising more than 400 acres were among a total 2,710 acres preserved this week in Pennsylvania.

Exiting his pickup truck, Steve Groff stepped out onto an earthen lane earlier this month, gesturing toward a row of tents on his Holtwood far…

Youth competitors, vendors could lose out due to virtual Pennsylvania Farm Show

With a proud, wide smile, Bailey Oberholtzer posed for a photo earlier this year, cradling the head of a sheep in her hands as she leaned in f…

At Kreider Farms, an early January announcement was made with pride.