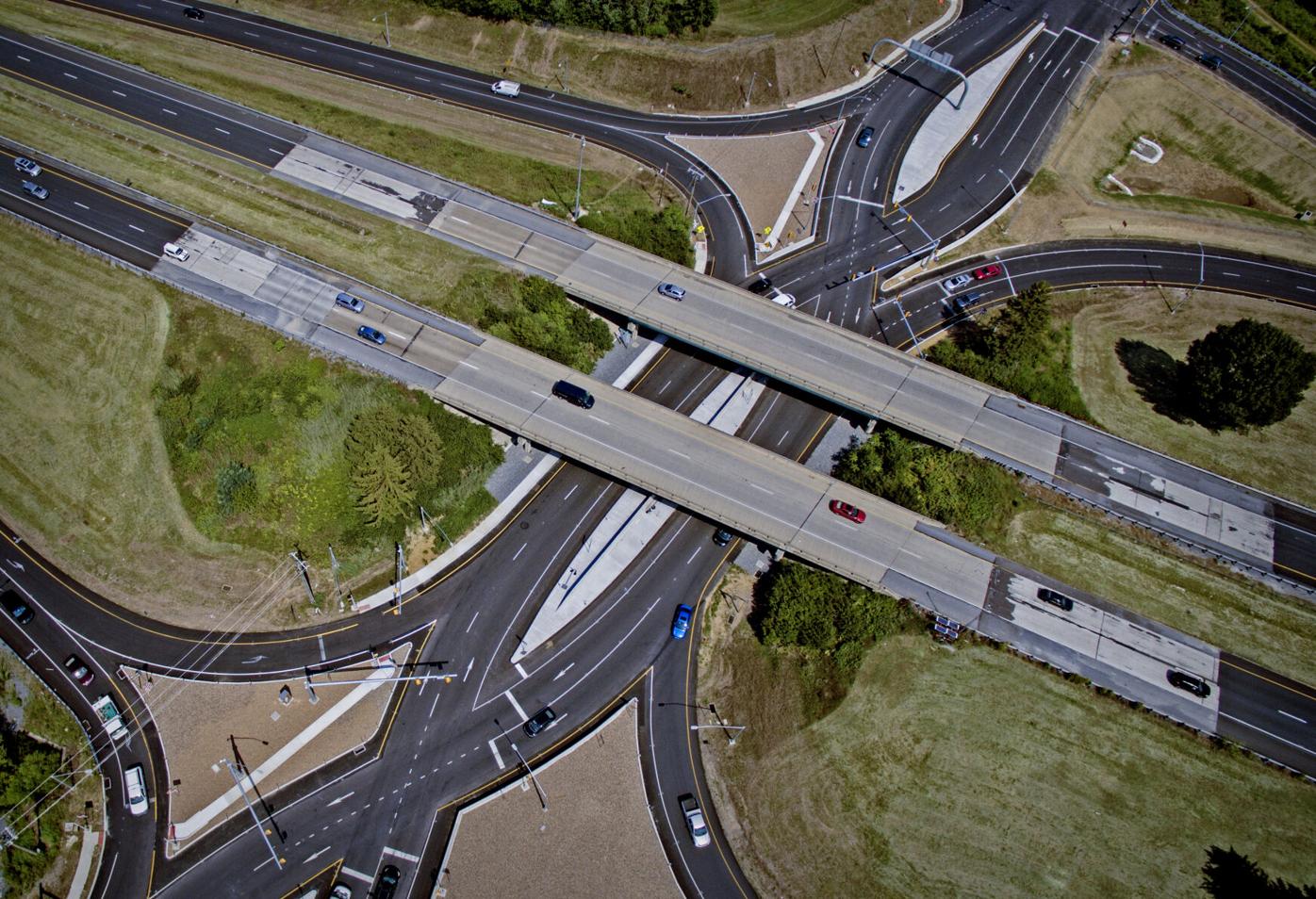 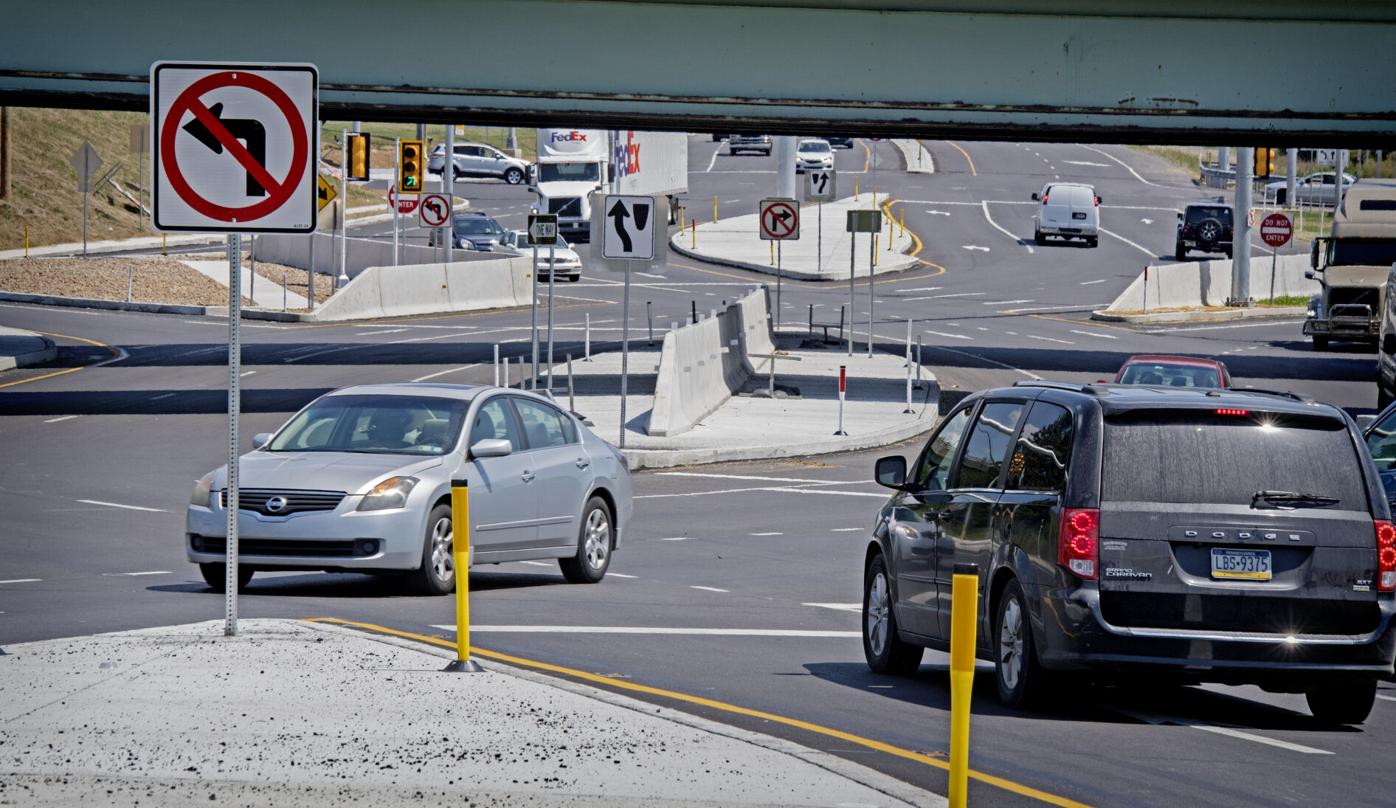 This is a view looking east from the west side of the new diverging diamond interchange on Rt. 322 at Rt. 222 in Ephrata Township Thursday, Aug 5, 2021.

Winding through traffic — crossing into what was once an opposing lane — Ephrata Township’s newly completed diverging diamond caught the Lancaster Watchdog off guard.

But a second trip through the $10.9 million reconfigured Route 222/322 interchange felt as natural as driving through back country roads.

While some motorists making their way through the new traffic pattern when it opened May 17 expressed reservations, there have been only a handful of collisions through last week, according to Ephrata police.

And none of the crashes were the type that, according to the Pennsylvania Department of Transportation, diverging diamonds are meant to prevent: T-bone and head-on collisions.

“With a DDI (diverging diamond interchange), the opposing lanes of traffic are separated by a barrier,” PennDOT spokesman David Thompson said in an email. “So, in addition to eliminating left turns and the risk of an angle crash, we’re separating opposing traffic, which also makes it safer.”

In its first three months, half of the crashes at south-central Pennsylvania’s first diverging diamond interchange were rear-end collisions, according to Thompson. The other three included red-light and lane-change violations, and a driver who fell asleep at the wheel.

“The majority of crashes involve human error,” he said. “It’s hard to predict them.”

Ephrata police said four crashes occurred at the interchange in 2019 between April 28 and July 26. Department Lt. Chris McKim said the slight increase in collisions in the three months since the reconfigured interchange opened to traffic isn’t significant because it is a brief period of time. Data from 2020 was excluded because that is when the bulk of construction took place, and traffic in the area was minimal.

“Anecdotally I would think there’s a downturn,” McKim said prior to examining the data.

McKim expects a similar decrease for the Route 222/322 interchange in the coming years.

PennDOT data from 2016 to 2020 shows 90 of the 179 collisions at the Route 222/322 interchange were “angle crashes,” which include T-bone crashes. Seventy-one rear-end collisions were reported in the same period, making those the second-leading cause of crashes.

“We would expect, over time, for a significant downturn in cross traffic impacts,” McKim said. “That’s not likely to change things like rear-end collisions, for instance. That’s just a matter of carelessness in general.”

Alex Maugle, project manager for Atglen-based contractor J.D. Eckman, said all work at the Ephrata Township diverging diamond will be complete at the end of this month, almost a year ahead of schedule.

The quick work can be attributed to less traffic on state roads at the beginning of the COVID-19 pandemic, which allowed for daytime and nighttime road closures. Work crews also worked five days per week compared to the typical four days for road construction projects.

“(Finishing projects early) doesn’t happen too often,” Maugle said. “We are very happy that we were able to get this diverging diamond done because it's one of the first in PA and the first in the east.”

Thompson said Lancaster County’s diverging diamond is the only one in the state that includes lanes for horse-and-buggies. The lanes also are used by bicyclists. Sidewalks were added at the interchange along westbound Route 322.

The state’s third diverging diamond opened in June at the Route 83/851 interchange in Shrewsberry Township in York County.

PennDOT resumes major road projects in Lancaster County; Here's some of what's being worked on

An innovative, $10.9-million upgrade to the routes 222/322 interchange near Ephrata begins n…

In the Dec. 2 edition of LNP, one of the front-page articles, “ ‘Nightmare’ area,” was about…

LEBANON − A marsupial's days of wandering the countryside of Lebanon County have come to an end.

Anita Darpino began her Aug. 22 email to the Watchdog with a caveat.