The Jay Landis farm is at right along East Oregon Road in Manheim Township in this panorama photograph. The white house with blue shutters at left has been purchased and will be demolished for the entrance to the development by Oregon Dairy which is in the background, left. It has been proposed that preserved farmland on either side of Oregon Road in this area be condemned for road improvements.

Looking northeast at the intersection of East Oregon Road and Kissel Hill Road where road improvements are proposed to accommodate the increased volume of traffic. The Amos King farm is in the background at left. 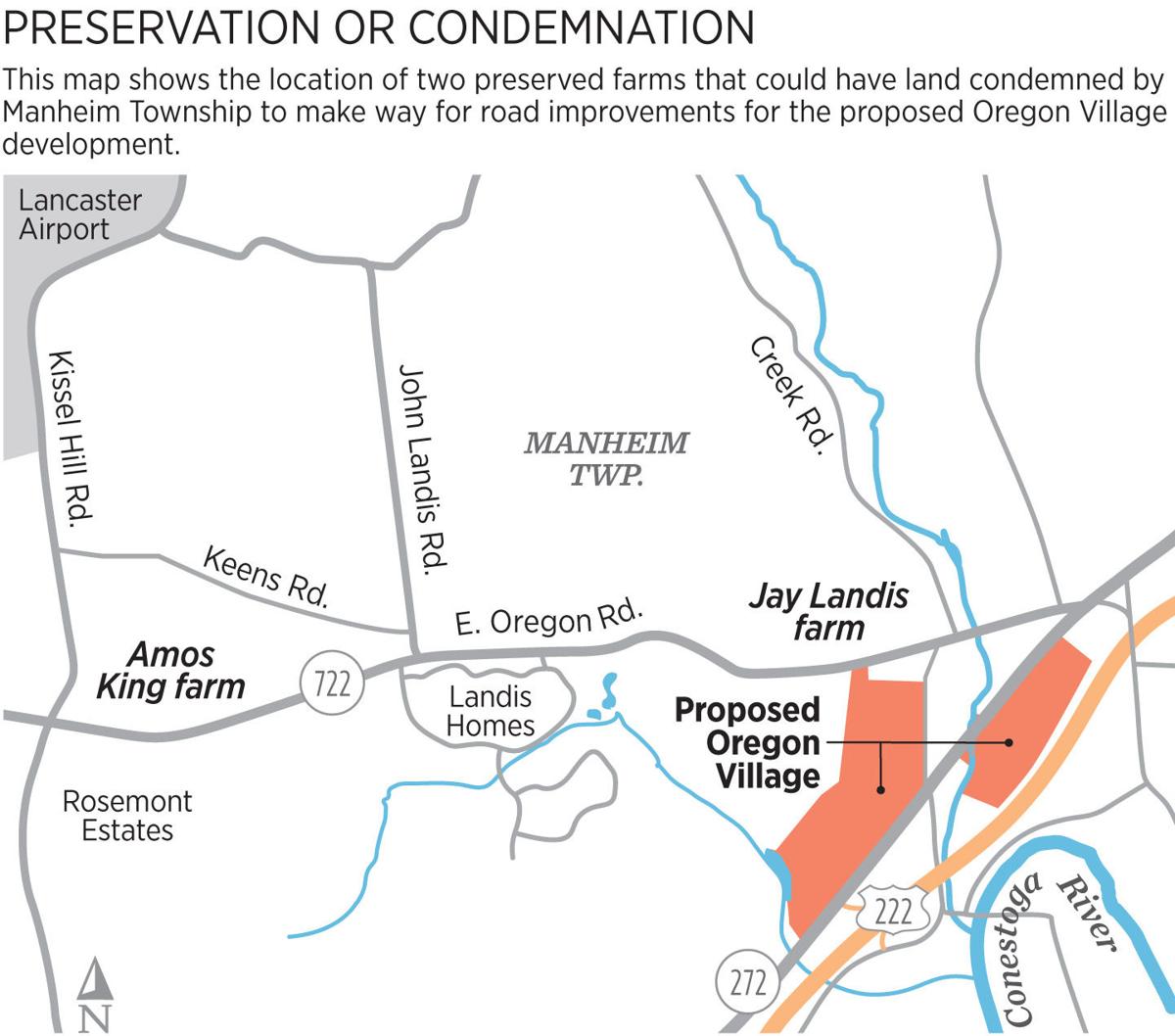 The Jay Landis farm is at right along East Oregon Road in Manheim Township in this panorama photograph. The white house with blue shutters at left has been purchased and will be demolished for the entrance to the development by Oregon Dairy which is in the background, left. It has been proposed that preserved farmland on either side of Oregon Road in this area be condemned for road improvements.

Looking northeast at the intersection of East Oregon Road and Kissel Hill Road where road improvements are proposed to accommodate the increased volume of traffic. The Amos King farm is in the background at left.

A tiny sliver of protected farmland may prove to be the Achilles’ heel of a $120 million project to build 565 housing units, a supermarket, restaurant and hotel in Manheim Township.

Developers of the project, called Oregon Village, want the township to  condemn a 0.3-acre piece of farmland so it can be used for traffic improvements along Oregon Road.

A favorable decision, farmland preservation advocates say, could have far-reaching implications for the future of hundreds of thousands of acres of protected farmland in a county where growing population is speeding up urban development.

“If it’s the size of a postage stamp or 100 acres, it doesn’t matter because the easements are either enforceable or they are not,” said Jim Tupitza, a West Chester attorney representing Esther and Marty Wenrich, who own a preserved farm on Oregon Road near the proposed development. “If they are not enforceable, then we have a big problem across the whole state.”

The developers of the proposed project are the Hurst family, owners of the popular Oregon Dairy supermarket and restaurant.

“If the Hursts get away with this on a preserved farm, then my farm isn’t worth a hill of beans to pass on to the next generation,” said Marty Wenrich  of the nearby preserved farm.

But Victor Hurst, co-owner of Oregon Dairy and a partner in the proposed development, disagrees.

“If we could have, we would have avoided preserved farmland. It’s not going to be in the middle of a farm or disrupting farm practices. We believe it is the best solution even though it affects a little sliver of preserved land,” Hurst said.

Manheim Township Commissioners are expected to announce a decision at their Jan. 23 public meeting.

The proposed development is in an area currently mostly farmed but within the township’s designated area for smart growth. It would consist of a mixed residential, retail and office center on two tracts, totaling 75 acres.

If the Oregon Village development is allowed to use the farmland for a road expansion, it could set a precedent for what is an acceptable use for protected farmland, preservation advocates say.

The Lancaster Farmland Trust, which holds the preservation easement to the Jay Landis farm on Oregon Road, where about 0.3 acre of roadside land is needed, has twice turned down requests by the Hurst family to allow the land to be used for road work. The Hursts bought the Landis farm last year.

An easement means the owner agrees not to make certain changes to the property or to make changes that would devalue its conservation value. The trust makes sure the owner doesn't violate the deal.

The Hursts offered to replace the lost land with five times as much land to be added elsewhere on the tract.

But the trust’s policy is clear: a preservation easement cannot be altered to benefit a private entity, in this case a for-profit development.

“We don’t amend easements for reasons like that,” said Karen Martynick, executive director of Lancaster Farmland Trust. “Clearly, if you look at the request, it would lead to the benefit of the Hurst family.”

In the past, the trust has altered easements on preserved properties, allowing “friendly condemnation” by PennDOT for road widening or bridge replacements in the interest of public safety.

Besides the Landis farm owned by the Hursts, a small piece of a second farm, also preserved by Lancaster Farmland Trust, may need to be condemned by the township for an intersection improvement. That is the Amos King farm at the Kissel Hill Road-Oregon Road intersection.

However, Hurst said on Wednesday that it is not certain yet if that land would be needed to make the necessary road improvements.

If the Hursts' request for using the farmland is granted, the  township would then be asked to use eminent domain to obtain the needed Landis farm property from the trust. The trust can challenge such a decision in the courts.

The developers first approached the trust in April 2014 seeking permission to use the roadside land for road improvements, in exchange for more land to be added to the farm.

After the board voted down the request, the Hursts again approached the trust in October 2015. This time, a request was made for the land in the interest of public safety, said Martynick. Again the board refused.

Preserved farm owner Wenrich, who has retained Tupitza to fight the Oregon Village development, says he is willing for a lengthy challenge in court if it’s a solid case.

Hurst said the family believes its development is in the best interests of the long-range and inevitable growth of the community and is not changing its plans.

“Nobody on this entire project wanted to touch preserved farmland,” he said. “The township needs room for growth. We can’t control that narrative as the Hursts. We can’t help that the population is growing. We believe that this is actually a good place for growth to happen because it’s at an exit on the only north-south highway in Lancaster County. We have water and sewer.

“Yes, it will create traffic. But the intersections improvements will make all safer and quicker. It will make the village of Oregon a quiet little village again.”

Al Kling, a Manheim Township commissioner, said he felt condemning the small part of preserved farmland “is considered something of a safety issue. It sounds to me like somebody is making a bigger thing out of it than needs to be done.”

When a farm is preserved in Lancaster County, that does not mean the land is off-limits forever.

Both the Lancaster County Agricultural Preserve Board that preserves farmland with taxpayer dollars and the private Lancaster Farmland Trust have participated in “friendly condemnation” to allow small edges of preserved land to be used for public health and safety projects such as road widenings and bridge replacements.

But the two preservation groups have been known to dig in and fiercely protect the sanctity of preserved farmland when other uses threaten.

And in the two most recent high-visibility challenges to preserved farmland here,  state agencies and the courts have sided with them.

In 2003, the Ephrata School District and the owner of a preserved farm agreed to allow an access road to be built through a preserved farm to a new elementary school. The farmer would be compensated by  more land than he would give up.

But Lancaster County, joined by such other friends of the court as Lancaster Farmland Trust and the Chesapeake Bay Foundation, fought against the intrusion of farmland, even though it only amounted to less 2 acres.

The case climbed all the way to the Pennsylvania Supreme Court, which ruled in favor of preservation rules in a 2007 decision.

Local preservation groups hailed the decision as historic and Lancaster County Commissioners said any other decision would have struck at the core of its farmland preservation efforts to secure land easements that were meant to last forever.

Another attempt to undo a preserved farm surfaced in 2001 when the Mount Joy Borough Authority sought to use eminent domain to purchase 5 acres of a preserved farm in East Donegal Township.

The farm’s landowners were not opposed but the state Agricultural Lands Condemnation Approval Board halted condemnation efforts.

More recently, Lancaster Farmland Trust has opposed granting easements for the proposed Atlantic Sunrise natural gas pipeline on 31 preserved farms in the county, saying it would violate conservation deeds that forbid uses that would decrease the value of farmland.

The project is still awaiting approval, but in a preliminary environmental impact study, the Federal Energy Regulatory Commission said underground pipelines would not violate preservation easements.

Lancaster Farmland  Trust continues to submit documents to FERC arguing that  it does.

Lancaster County, alone, has twice as many dairy cows as Maryland and 25 percent more than found grazing in all of Virginia.

After nearly two years of reviews and uproar, the controversial Atlantic Sunrise pipeline could get federal approval in a matter of weeks.

What is 'village growth,' and how does Oregon Village fit into Lancaster County's long-term development plan?