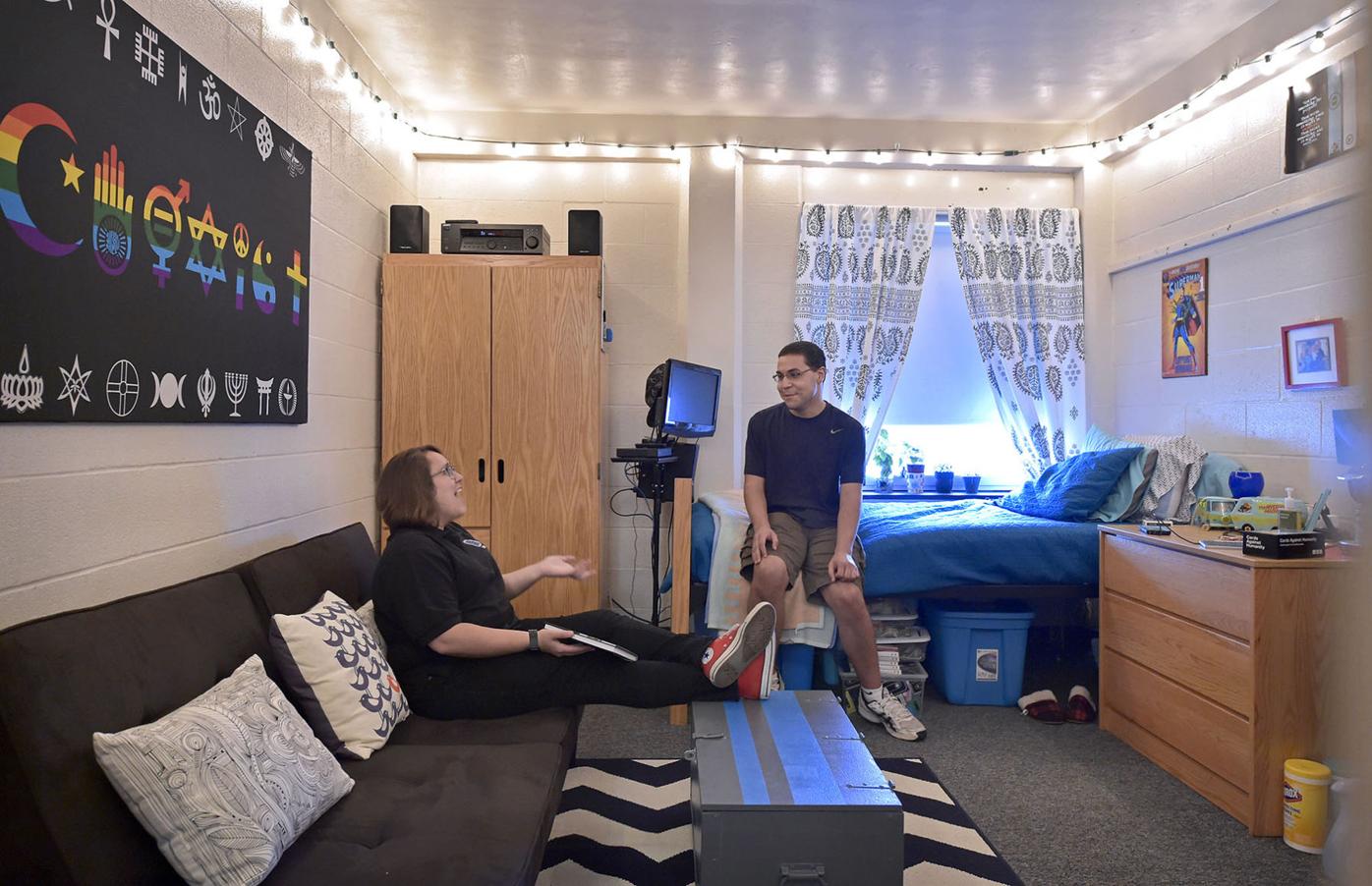 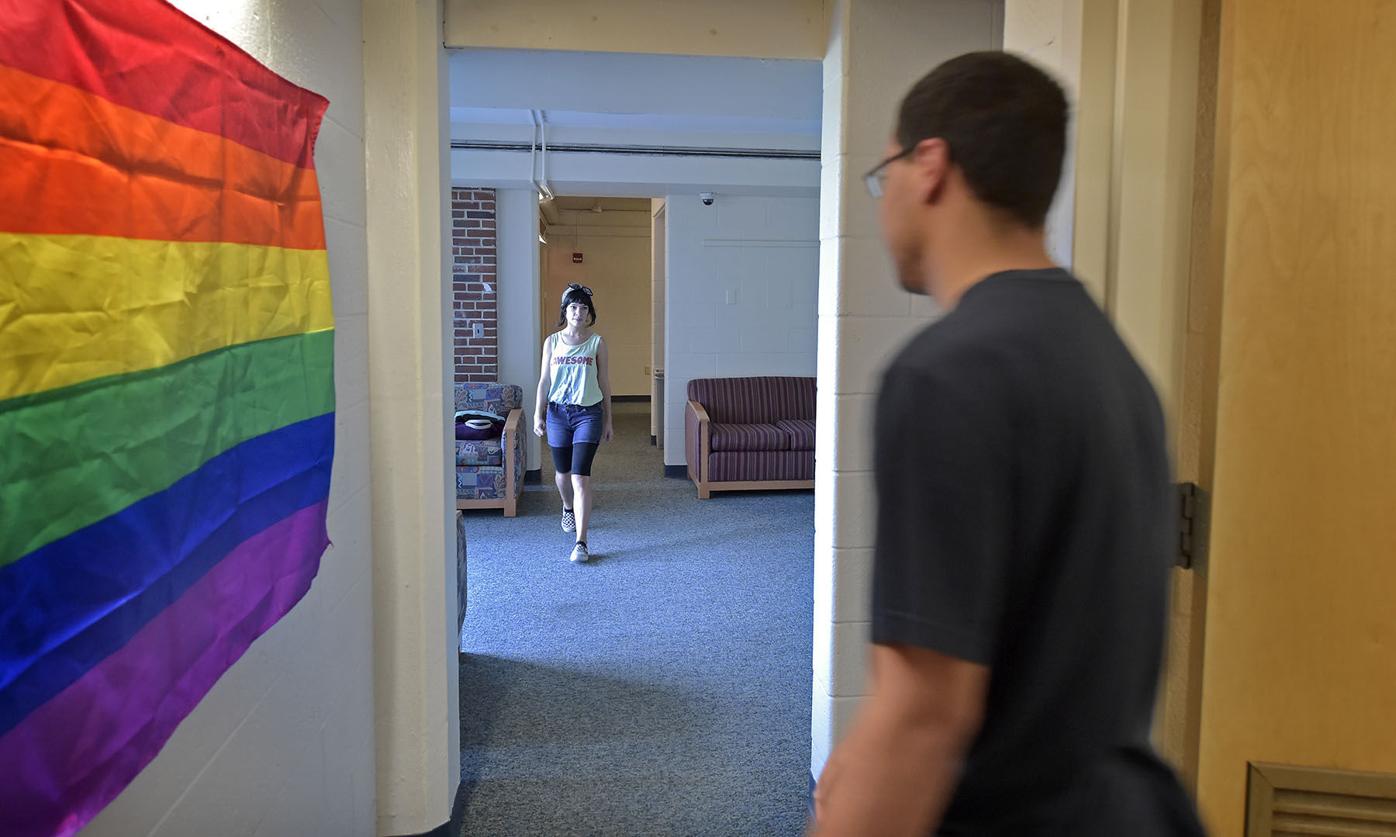 Elizabethtown College is making "gender-neutral" or "gender-inclusive" housing available this year. Mo Kalmbacher, left, and Josh Swint are residents there. 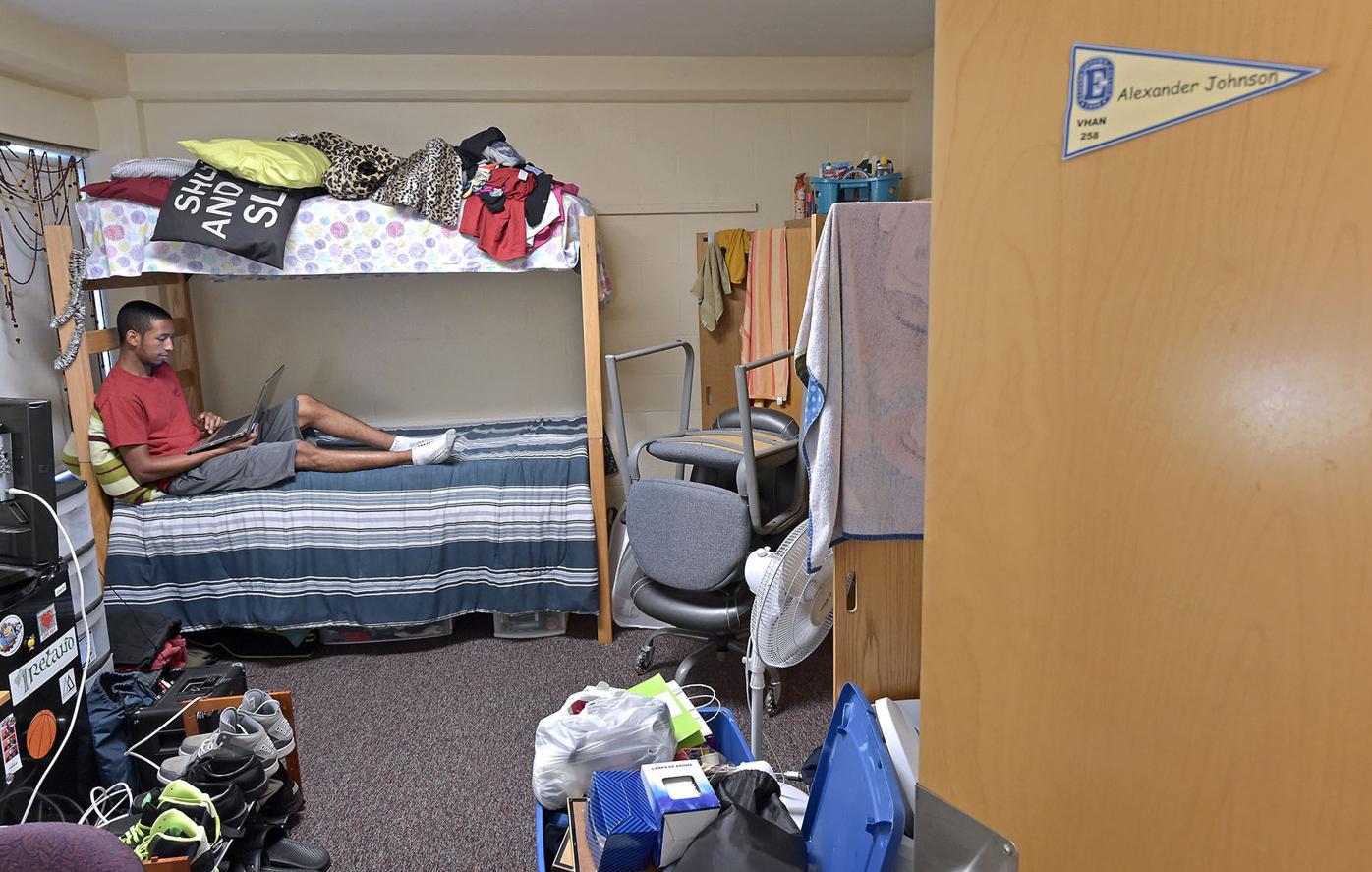 Alex Johnson sits on his bunk in gender-inclusive housing at Elizabethtown College.

Elizabethtown College is making "gender-neutral" or "gender-inclusive" housing available this year. Mo Kalmbacher, left, and Josh Swint are residents there.

Alex Johnson sits on his bunk in gender-inclusive housing at Elizabethtown College.

Elizabethtown College sophomore Mo Kalmbacher is excited about being a resident assistant this year.

Specifically, the 19-year-old environmental science major is happy about the type of housing: It's E-town's first gender-inclusive option, also known as gender-neutral.

As of the fall term (classes start Monday), students living on the first and second floors of Founders Residence Hall will be able to select roommates of any gender, said Allison Bridgeman, associate dean of students and director of residence life.

While anyone can make that choice, the option is seen as addressing the needs of lesbian, gay, bisexual and transgender students, who may not be comfortable in traditional same-sex housing.

"I'm especially excited for an opportunity where transgender students can house somewhere, and not be afraid," Kalmbacher said.

They’ll have a support system, and won’t have to worry about hiding their orientation from a potentially unsympathetic roommate, or dealing with gender-specific restrooms.

Kalmbacher identifies as "non-binary," as opposed to strictly female or male.

The two floors of Founders have a total of 32 beds available, and 23 students have signed up Bridgeman said.

The hall's first floor is home to Stonewall Hall, a "Living-Learning Community," or LLC, devoted to LGBTQ issues.

E-town has a number of LLCs, which are designed to "create a bridge between classrooms and community," allowing students and faculty to interact in a residential setting as well as through formal classes.

Some are themed, while others are course-based.

Joshua Swint, 20, is a junior psychology and sociology major with a minor in women's and gender studies.

He was a resident assistant in Stonewall Hall last year and is returning in the role in the gender-neutral section.

"A lot of people on campus collectively thought this would better serve students," he said of the new option.

It's a way to break down "some of the gender-binary stuff that we're accustomed to," he said.

Nationwide, more than 200 colleges and universities offer gender-inclusive housing, said Genny Beemyn, director of the Stonewall Center at the University of Massachusetts, Amherst, and coordinator of coordinator of Campus Pride's Trans Policy Clearinghouse.

“It’s certainly something that more and more colleges have done,” Beemyn said.

Franklin & Marshall College allows mixed-gender groups in suites, but not in doubles, dean of the college Margaret Hazlett said.

Penn State University offers gender-inclusive housing, as do several of the 14 State System of Higher Education Schools, including at least two that are introduce it this fall.

Students aren't asked to give a reason when they opt into the housing, Bridgeman said — E-town didn't want to make the process burdensome or intrusive.

"It's an inclusive process," she said.

At most campuses, Beemyn said, residents are just "two people who are of different genders who want to live together."

Does that include boyfriend-girlfriend couples? Strictly speaking, it can, but "most people recognize it's not a good idea" to subject what for many is their first significant romantic relationship to the stress of sharing college living quarters, Beemyn said.

In the spring, Kalmbacher and Swint said, there was an incident at E-town in which a conversation about gender-neutral bathrooms on the anonymous social media app Yik Yak turned negative. Some students felt threatened and campus security and the administration got involved, Swint said.

During that situation, Stonewall was a refuge for LGBT students, Kalmbacher said. Students hung out in the lobby even if they lived elsewhere.

"It was nice that we could have somewhere where we could all be together," Kalmbacher said.

Besides the restrooms on the two floors at Founders, there is a designated gender-inclusive restroom in one academic building and college is working on having more, Bridgeman said. The campus also has a number of single restooms.

Bridgeman said the college plans to be flexible with the housing in its first year. There could be students who opt in as the year progresses, she said.

"We're excited to be able to offer this option to our students," she said.

Residents of 'The Nest' to focus on healthy living

Besides gender-inclusive/gender-neutral housing, Elizabethtown College is launching another housing option this fall.

It's "The Nest," a Living Learning Community dedicated to healthy living.

It will be situated at Founders Hall, said Allison Bridgeman, associate dean of students and director of residence life.

Living Learning Communities, or LLCs, are a way to create smaller communities for students within the campus. Students interact with faculty on projects and informal settings on topics that interest them, enriching the college experience.

The Nest will offer health education and outdoor activities such as hiking and camping. Students will pledge to keep the floor drug-free and alcohol-free, Bridgeman said.

While E-town expects students to respect drug and alcohol laws, it's a fact that "students do choose to experiment," she said.

Students who don't indulge sometimes feel left out. The hope is that the Nest will "allow students to connect with others who feel similarly," and build community, Bridgeman said.

LLCs are intended primarily for freshmen, and to some extent for sophomores. About 40 percent of freshmen are in one, Bridgeman said.

Juniors and seniors can join Student Directed Learning Communities. They are residential programs centered around "a common theme, issue or interest," and based in a number of houses the college owns along the campus perimeter. SDLCs have a service, advocacy or volunteerism component, reflecting E-town's "Educate for Service" motto.

The application process is selective, and participation is limited to about 50 students, Bridgeman said.