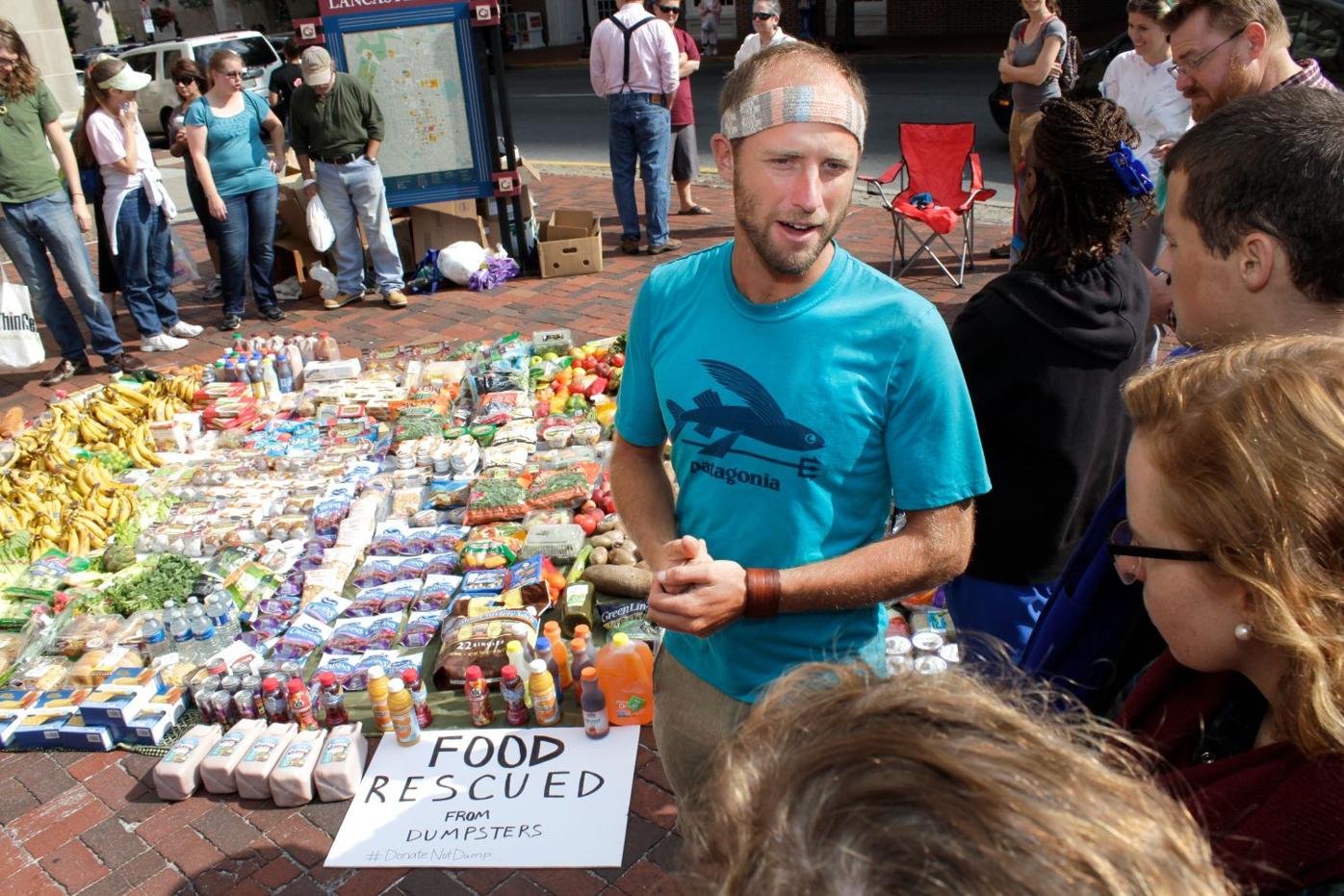 Rob Greenfield explains his mission to a group of curious onlookers during a demonstration on Saturday in Penn Square. 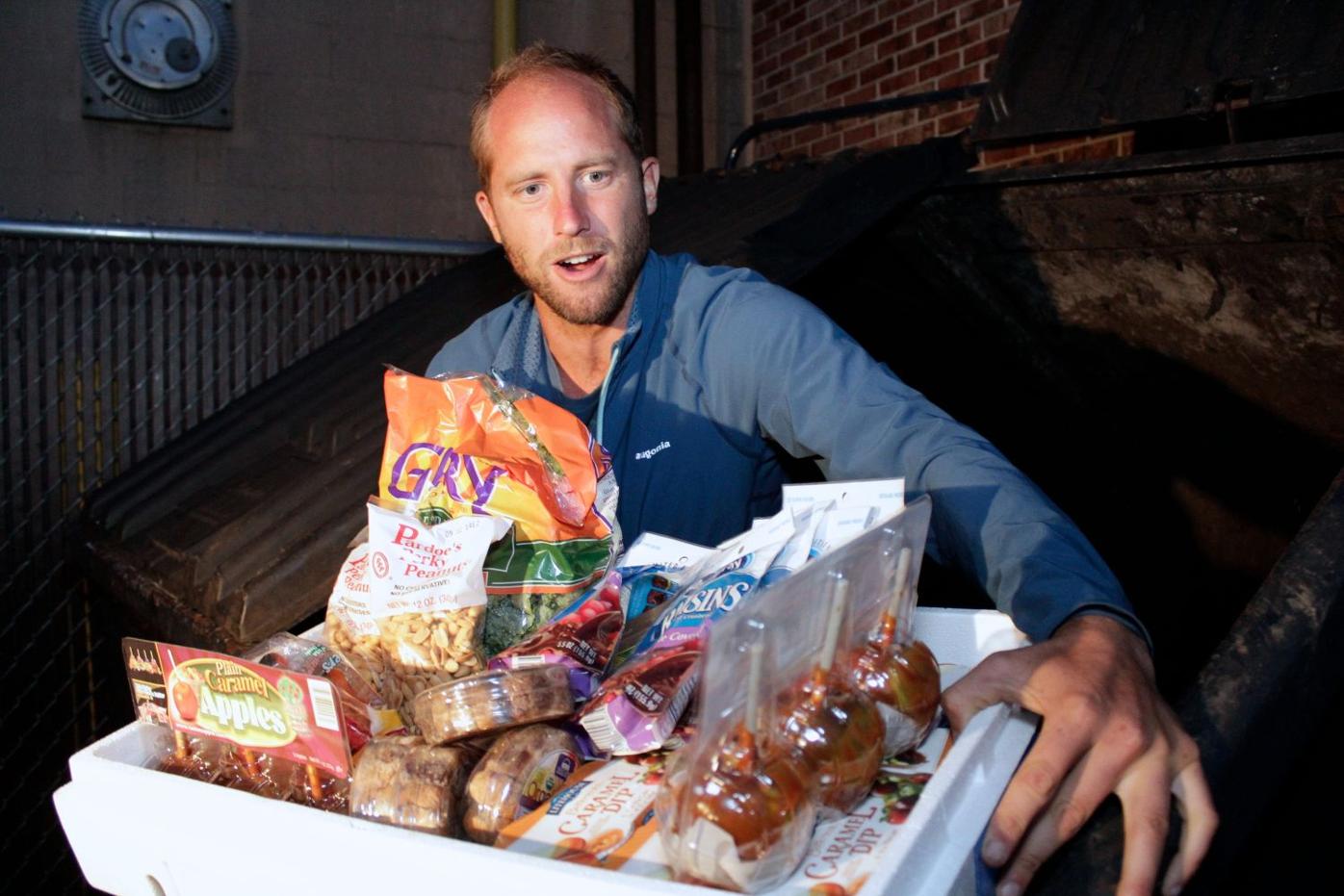 Rob Greenfield, standing in a dumpster,  shows a tray of food he found he collected outside an East Lampeter grocery store. Greenfield says he eats out of dumpsters exclusively in order to raise awareness about food waste. 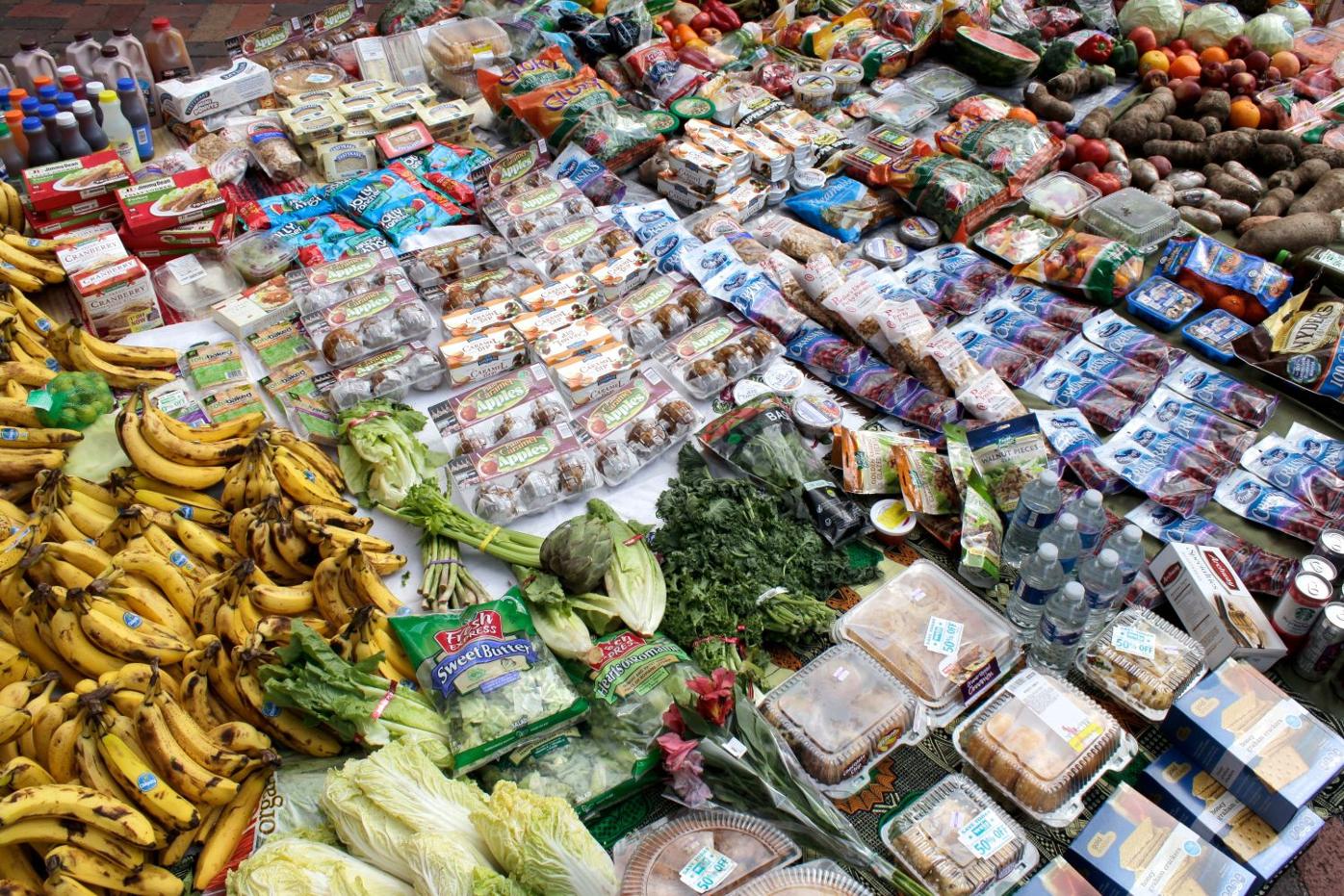 Displayed on the bricks of Penn Square, "rescued" food from Friday night's dumpster dive gave the public on Saturday a concrete image of the amount of food wasted daily. 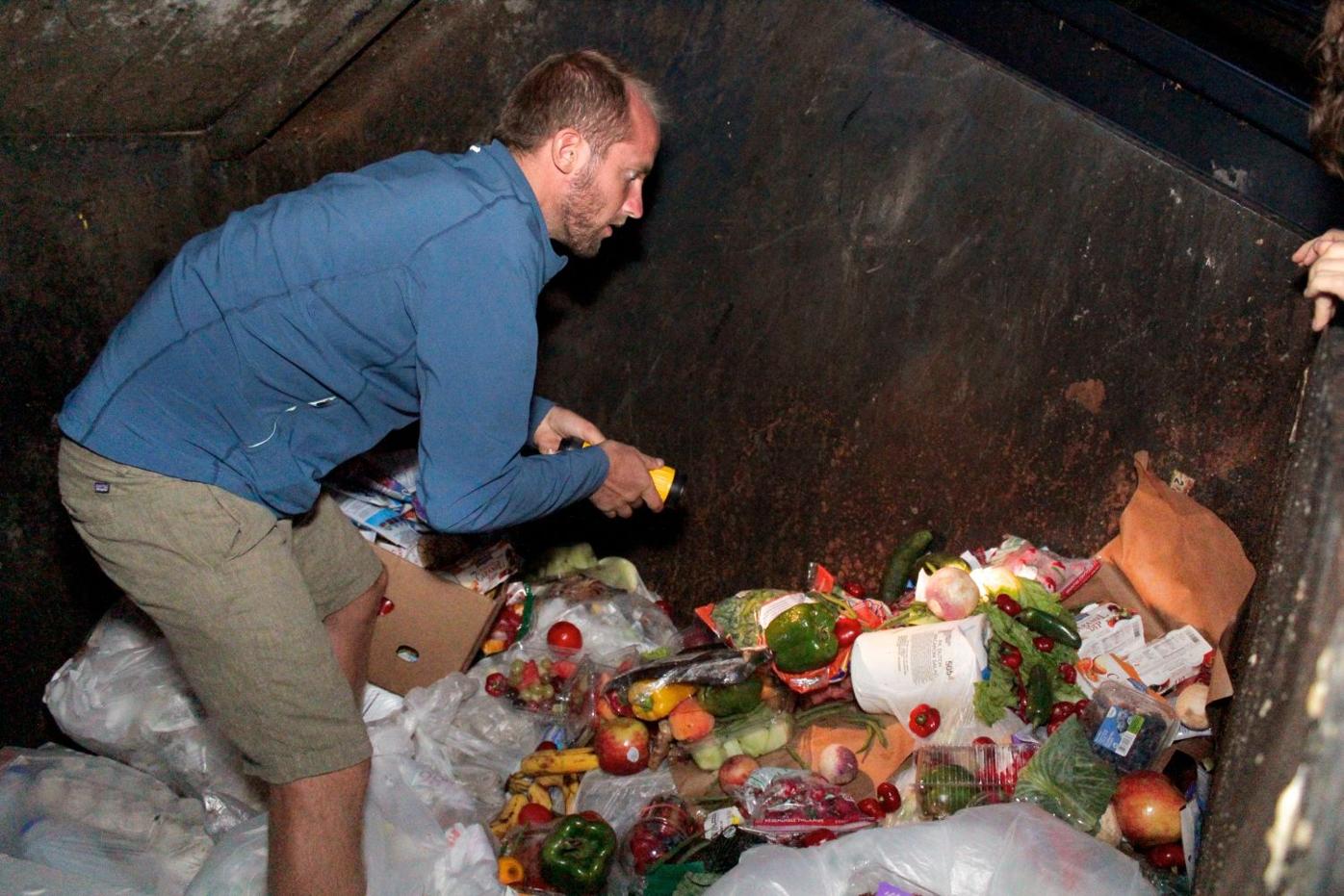 Greenfield, knee-deep in garbage, shines a flashlight on some produce and before selecting which items he will take.

Rob Greenfield explains his mission to a group of curious onlookers during a demonstration on Saturday in Penn Square.

Rob Greenfield, standing in a dumpster,  shows a tray of food he found he collected outside an East Lampeter grocery store. Greenfield says he eats out of dumpsters exclusively in order to raise awareness about food waste.

Displayed on the bricks of Penn Square, "rescued" food from Friday night's dumpster dive gave the public on Saturday a concrete image of the amount of food wasted daily.

Greenfield, knee-deep in garbage, shines a flashlight on some produce and before selecting which items he will take.

Rob Greenfield paused in his digging, picked up a banana, peeled and ate it.

The banana followed the shelled peanuts, the organic figs and the chocolate covered craisins.

Greenfield, 28, was soon full. But his trip to the East Lampeter Township grocery store Friday night wasn’t about feeding himself.

It was about the food going to waste in the dumpster where he was standing barefoot.

“This is appalling,” he said, after uncovering a cache of still-cold crabs and a $25 bag of shrimp.

Greenfield, a Wisconsin native now living in San Diego, said he has been in 500-600 dumpsters in the past five months. The whole lobster, probably alive when it was placed there, was a first for him.

Otherwise, the eight-box haul from the dumpster was all too typical.

Lancaster was one of Greenfield’s last stops on a nearly four-month, cross country bicycle journey in which is trying to bring attention to the food Americans throw away.

One in six Americans is “food insecure.” They do not have economic access to sufficient safe, nutritious food, the National Resources Defense Council reports.

That level of hunger is staggering to Greenfield, given that 40 percent of the food produced annually in the United States — $165 billion worth of food — is wasted.

He calls for food to be donated to food banks and community meal programs.

“If all the stores donated all this food there wouldn’t be hungry people,” said Catherine Rivera, a stay-at-home mom from Warwick Township.

Standing in Lancaster’s Penn Square Saturday morning, she looked over the 12-by-12 foot display of “rescued food.”

There were piles of fresh apples, pineapples, chocolate, pies, infant formula, candy, a stack of bread loaves, jugs of chocolate milk and juice, and bags of peppers and potatoes.

Many of the items had not reached their “sell by” dates. The craisins, for example had a “best used by” date of the next day. A box of individual Tastycakes pies were good through the weekend. Some items were good until next month.

Many items were individually packaged. Rivera said the bags of salad were from an unopened case. The heap of blemished bananas were in boxes that had not even made it into the dumpster. They were stacked beside it.

Rivera worked with Max Hollman, a Lancaster web designer, and Nydia Manos, a Lancaster computer instructor, to gather items from six or seven suburban dumpsters over more than four hours.

They stopped when it got late and the car was filled twice, not because they were out of food.

“This was astounding. This was just one day,” Hollman said, marveling at the haul.

It was their first time dumpster diving.

Manos said she opened the first dumpster to see pristine ginger root sitting on top of a bag. She had cooked with a recipe requiring the spice a few hours earlier.

“It just never sunk in, the insane volume, until I did it,” she said of encountering the food waste in the dumpster.

The exercise Friday night and the Saturday morning display in the square were about catching attention. It succeeded. A crowd milled around in the square, many shaking their heads.

The food was later offered free to whoever wanted it. It disappeared quickly as bystanders took their pick.

Greenfield hopes to catch the attention of grocery chain executives. He has contacted some and plans to reach out to others after his trek concludes in New York City in a week.

After gathering food with Greenfield Friday night, Katrina Seifarth she would be willing to help establish an organization to collect donated food from stores.

“There has got to be a way to get all this food to people who need it,” said Seifarth, an Ephrata mother and high adventure camp tour guide.

Rivera said she contacted three food banks before the Friday night collection. She was told government regulations prohibited them from taking food that had been in the trash.

According to the National Resources Defense Council, the “use by” and “best by” dates are placed on packaging by manufacturers to indicate peak food quality. They are not expiration dates and do not indicate food safety.

“The policies in the grocery stores need to change,” said Gwen McComsey, a Lancaster-based birthing doula who hosted Greenfield’s visit.

Greenfield said store managers have been largely supportive when he encountered them. A few were angry to find him in their dumpster, but calmed when he explained his purpose.

They didn’t like having the food go to waste either, he said.

Despite the fact that dumpster diving is trespassing, Greenfield said he has not been arrested or otherwise gotten into trouble.

Because the act of removing items from the trash on private property is illegal, Lancaster Newspapers is not identifying the names and locations of the stores where it occurred.

On Friday night, only Rivera’s group encountered store employees. The employees ignored them, as though they weren’t there, Rivera said.

Greenfield didn’t start from California with the intention of dumpster diving across the country.

But he allowed himself to pull from dumpsters when local food and money was scarce.

He could rationalize dumpster diving because the energy and water needed to produce the food had already been expended. And, those resources were going into the landfill without his intercession.

“After a few weeks doing it, I just couldn’t rationalize buying food anymore,” he said.

He entered his first dumpster of his travels in Madison, Wis. in early June. Initially, he was just going to eat from dumpsters for a week in Wisconsin. Then, he kept it up. And, the focus of his message changed.

Greenfield said he is not encouraging people to dumpster dive. He’d rather the wasn’t in the trash. But, if it is, removing it does cut down on food going to the landfill, he said.