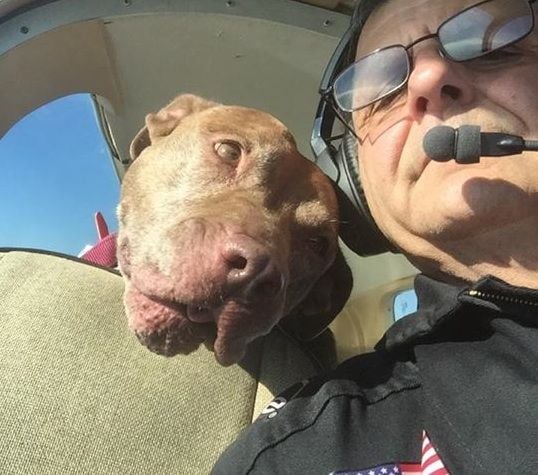 PAART pilot Robert Calabrisi snaps a selfie with one of his passengers while in the air en route to Lancaster. 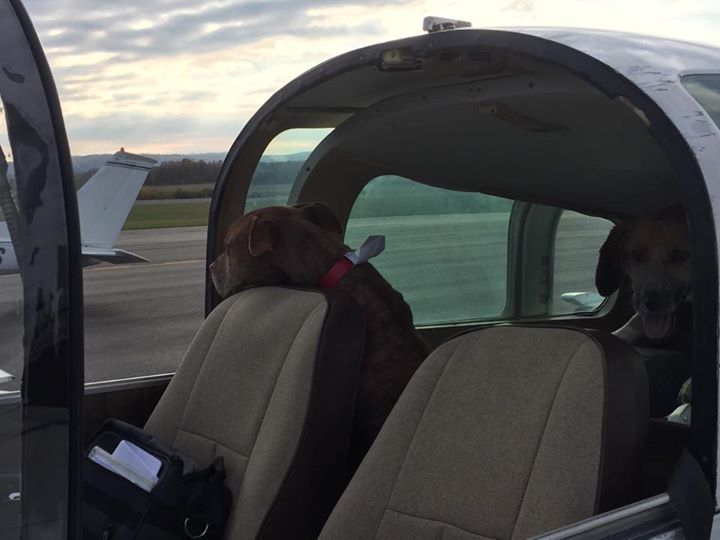 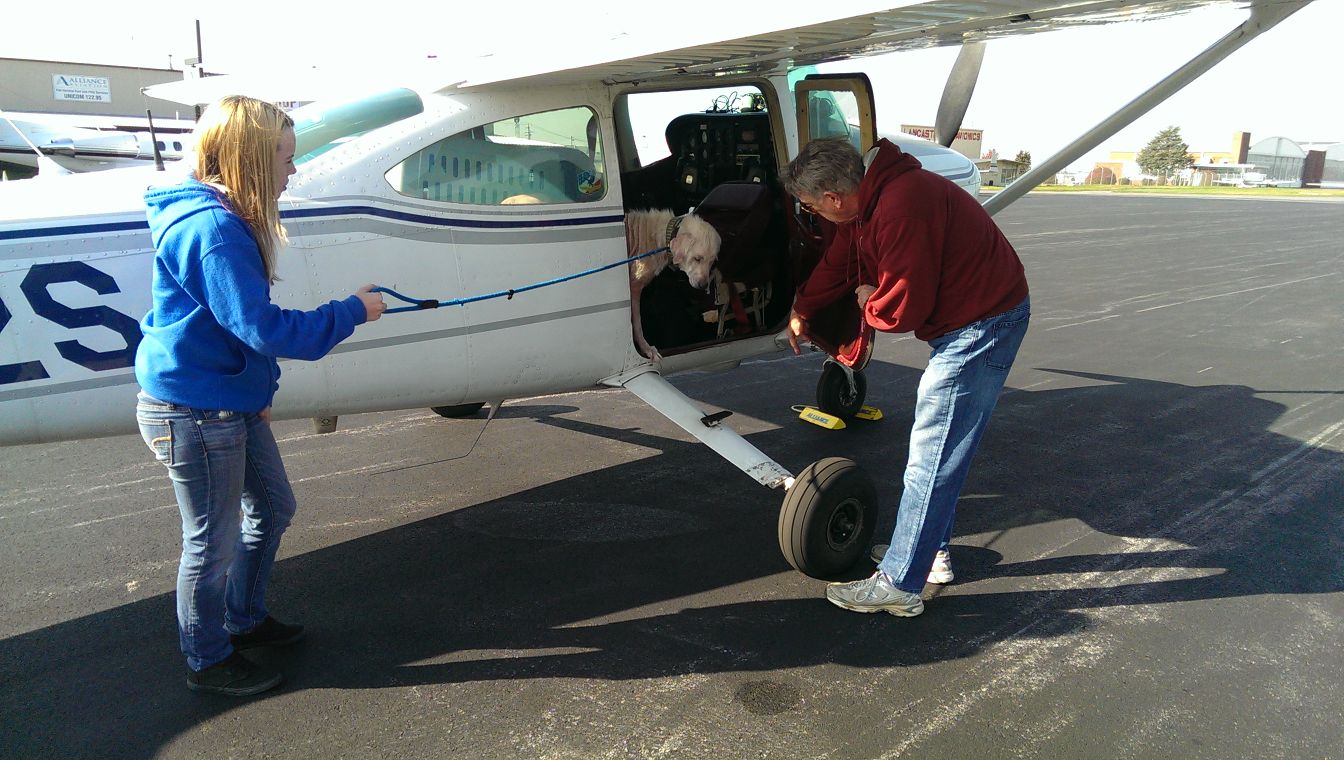 Sally, one of the dogs rescued from West Virginia, debarks Saturday morning from a plane at Lancaster Airport. 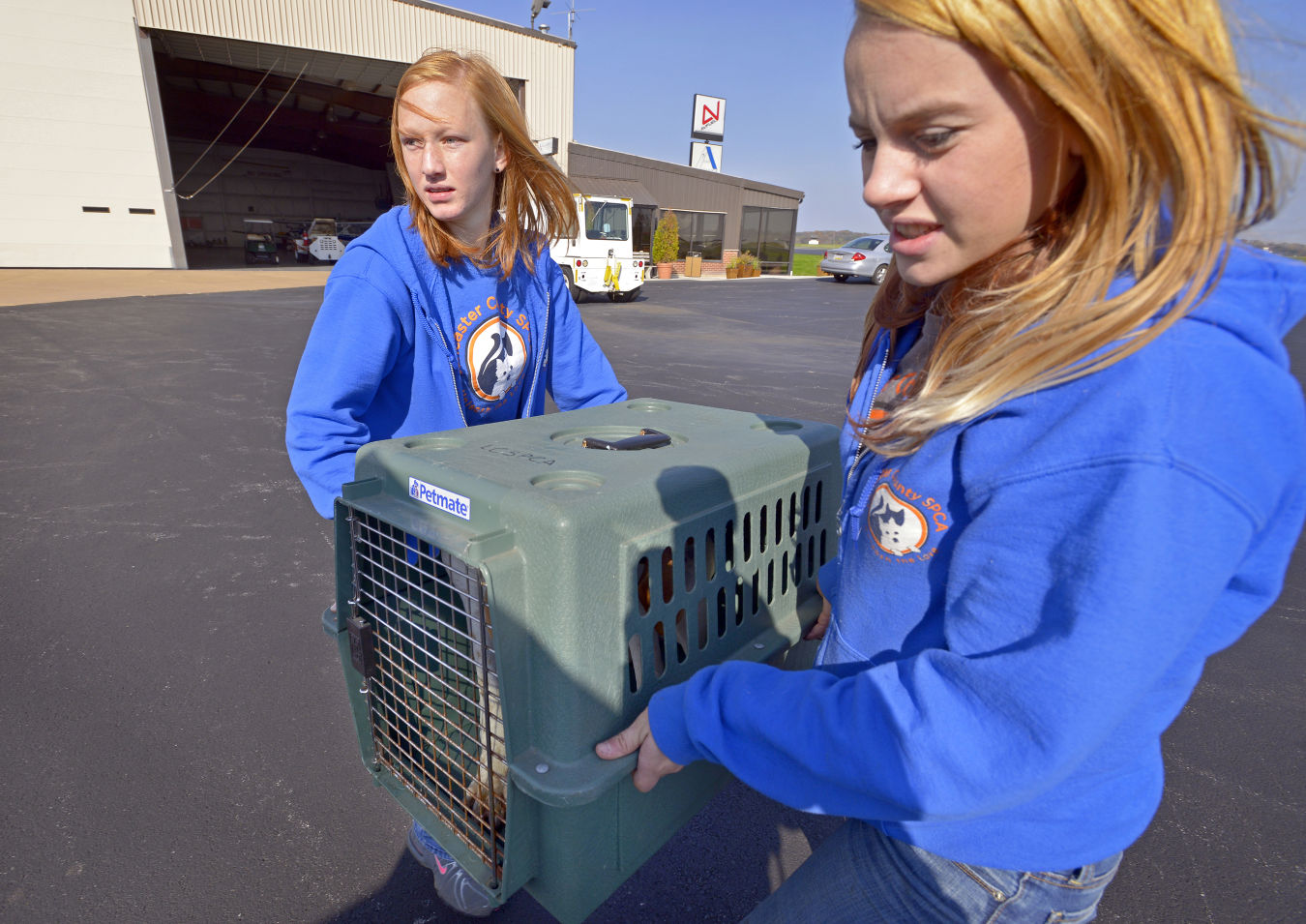 Amber Snyder, left, and Jennifer Nields with the Lancaster County SPCA transfer a dog that just arrived by plane to their van. 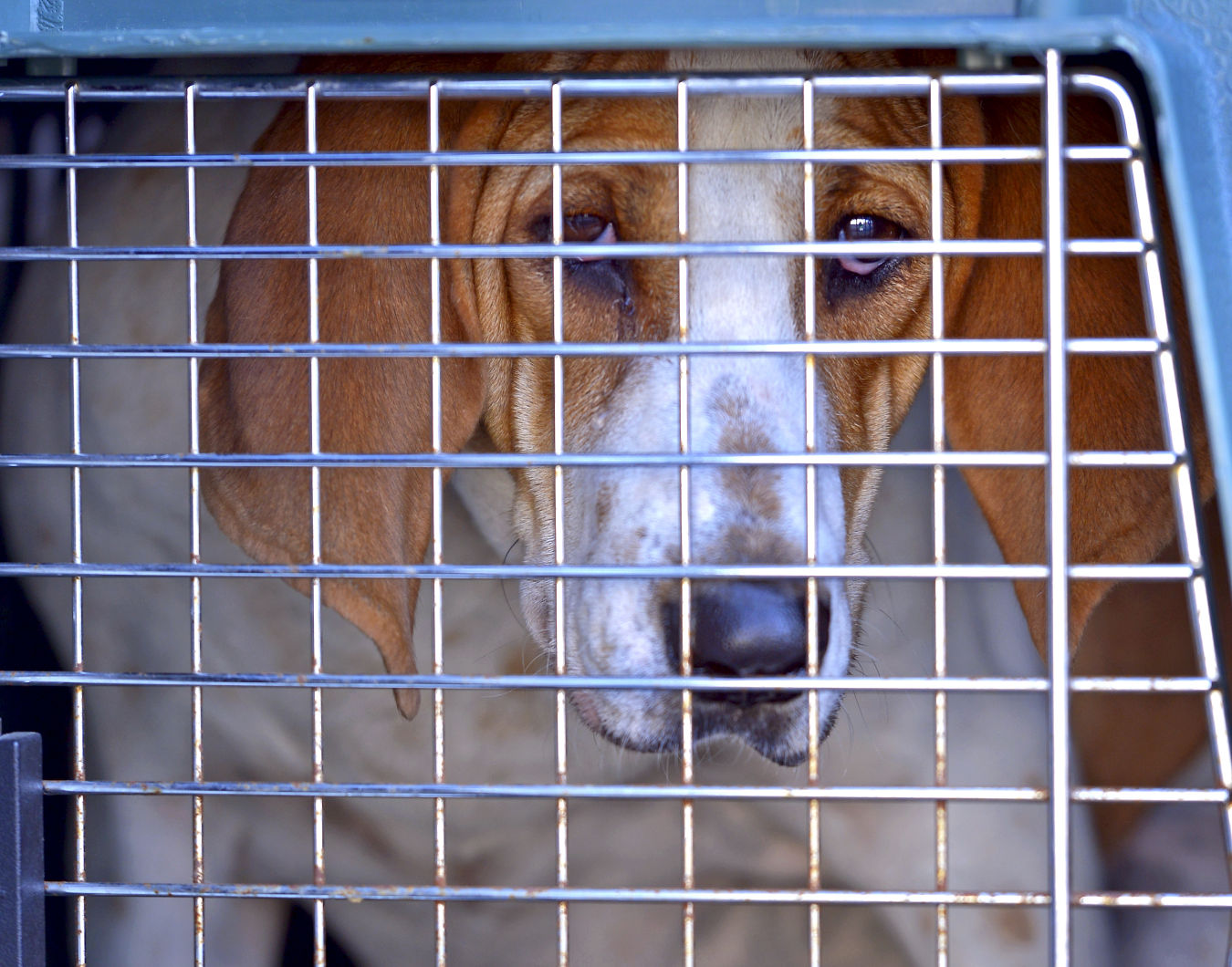 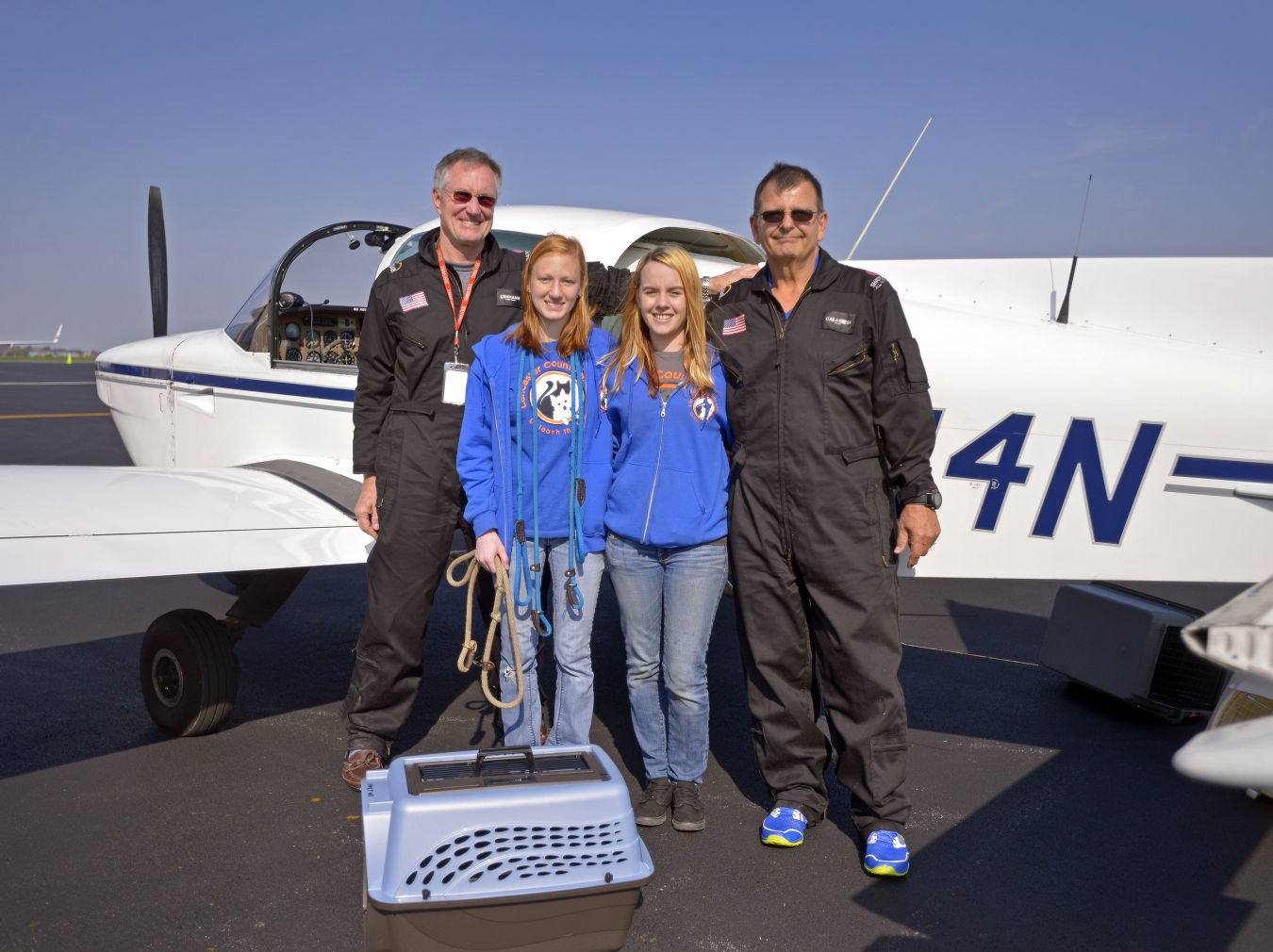 PAART pilot Robert Calabrisi snaps a selfie with one of his passengers while in the air en route to Lancaster.

Sally, one of the dogs rescued from West Virginia, debarks Saturday morning from a plane at Lancaster Airport.

Amber Snyder, left, and Jennifer Nields with the Lancaster County SPCA transfer a dog that just arrived by plane to their van.

And not just any canines — these pups were scheduled to be euthanized Friday at a shelter in West Virginia.

His network of shelters and pet adoption services led him to Lancaster.

“We’ve been full for the last couple weeks, but we’ll take them anyway,” says Susan Martin, director of the Lancaster County SPCA. “We haven’t been so full yet that we can’t make do. ... If it’s a matter of good dogs being euthanized, we’ll make arrangements.”

Plesset and his team flew in 15 dogs on Saturday; he said last week that size mattered more than number.

“We’re looking to transport about 1,000 pounds,” he explained Thursday. “We’ll keep loading until the planes can’t take any more, then we’ll go.”

PAART, based at Allegheny County Airport in West Mifflin, sparked in 2004 when Plesset and pal Brad Childs got their pilot’s licenses.

“We needed a mission,” he says. “I mean, how many times are you just going to fly around the city?”

In 2006, Childs did a friend a favor by picking up a 90-pound bulldog named Monte. Monte broke free of his harness mid-flight and jumped on Childs’ lap — and gave Childs an idea.

Soon, they and other pilots were transporting dogs from overcrowded shelters, and food and supplies to shelters that were running low. In 2013, the team gained nonprofit status and began raising funds to support their costs, such as fuel.

The pilots don’t charge shelters for the service.

He estimates they’ve shifted more than 600 dogs to new locations, as well as cats, ducks and the occasional pig or python.

“We’ve gone as far as Florida. We’ll never do that again — that was far,” he says.

Most of their flights range from New York to Virginia and as far west as Ohio.

“Over the last two years, we’ve pretty much gone out every weekend, barring bad weather,” Plesset says. “A lot of work goes into the coordination.”

In flight, the dogs are sometimes in crates, sometimes loose in the plane.

“We pray they don’t destroy the plane — although we did lose a seat once to a Great Dane. He decided to eat the co-pilot’s seat,” Plesset says.

“We’ve never had any incidents that were dangerous. Sometimes they’re a little too affectionate and try to get in your lap while you’re flying. But that’s as dangerous as it gets.”

This is PAART’s first time landing dogs in Lancaster.

Martin says she’s thrilled to bring the mixed-breed dogs, many of which are puppies, to a new home.

“That particular rescue in West Virginia — it’s kind of horrifying,” she says. “It’s a municipal shelter, basically just a concrete slab. There are no lights, no electricity.”

It also has a very high euthanasia rate, she says — a problem common in the South, she adds, where spaying and neutering are rare, and packs of wild dogs are as common as feral cats are here.

“What we face here is nothing compared to what they face down there,” Martin says. “It’s an epidemic in the South.”

The Lancaster SPCA previously took in 28 dogs in three shipments from the West Virginia shelter, she says; all were adopted out.

This is the first time dogs have come in by plane, however.

It works out, Martin says, because the local SPCA can usually place dogs in new homes fairly quickly.

“Our turnover is phenomenal,” she says. “We live in such a great county. There are so many dog lovers, it’s few and far between that we have to euthanize dogs — and it’s almost always because of temperament.

“None of our dogs here are jeopardized because of these dogs from down South.”

A few times, Plesset says, pilots opted to keep a dog they picked up.

“The shelters know that’s a risk. We’re all obviously dog lovers,” he says. “Generally, we try not to do that. If we open that dam....

“It does get emotional,” he adds. “Sometimes when we pick them up, they’re hours from euthanization. Then when you drop them off, you know they’re going to be adopted or at least go to a shelter that’s better suited to handle them.

“When we board them, they’re excited. Getting them settled is hard,” Plesset says. “Once we get moving, they go from excited to asleep. ... We haven’t had a dog yet stay awake for the in-flight movie.”

Concerned pilots consulted a veterinarian, he says, worried that the dogs might be in pain. The vet said they’re OK, Plesset says — it’s just an effect of the altitude, which has a greater impact on dogs than people.