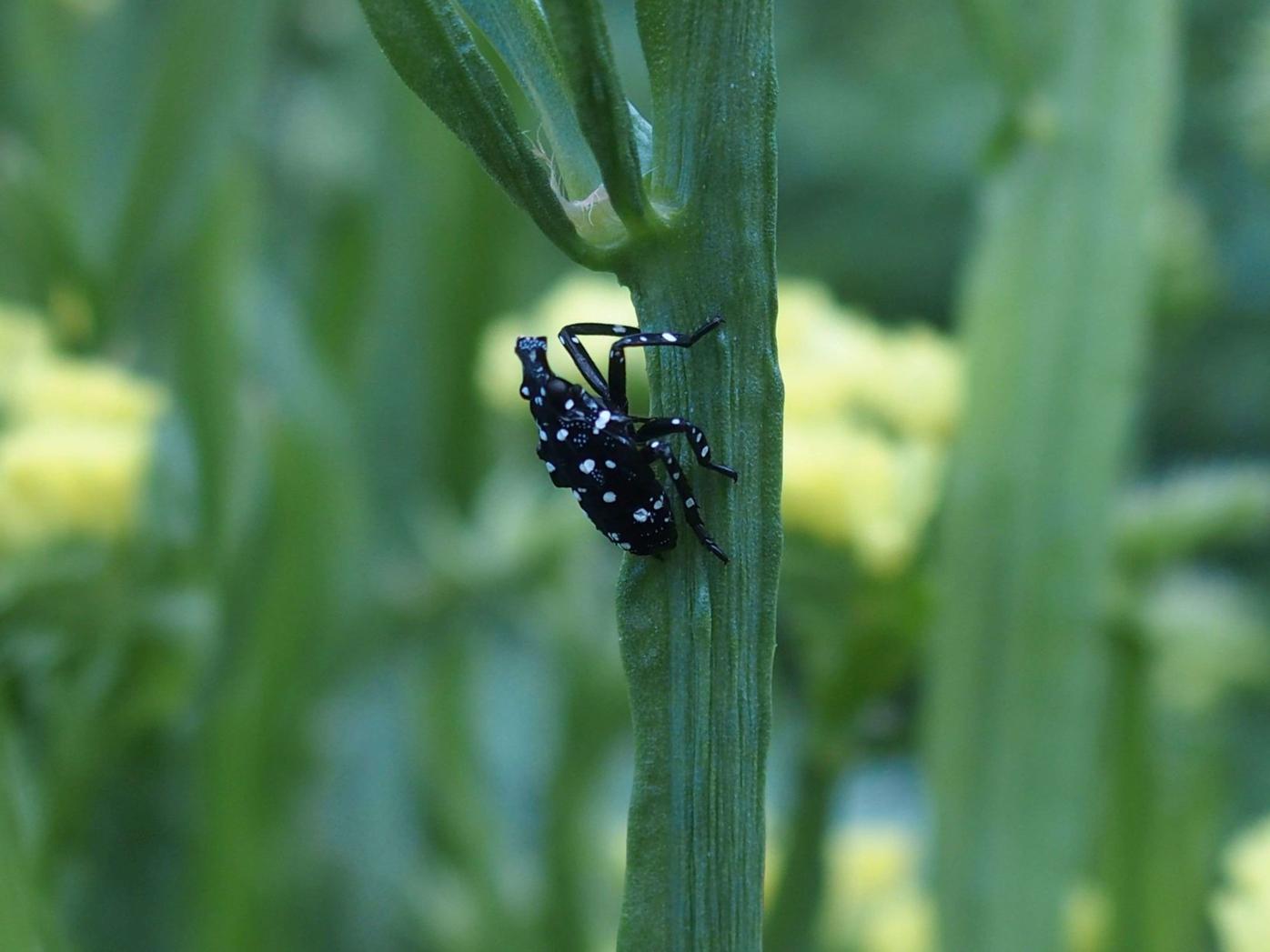 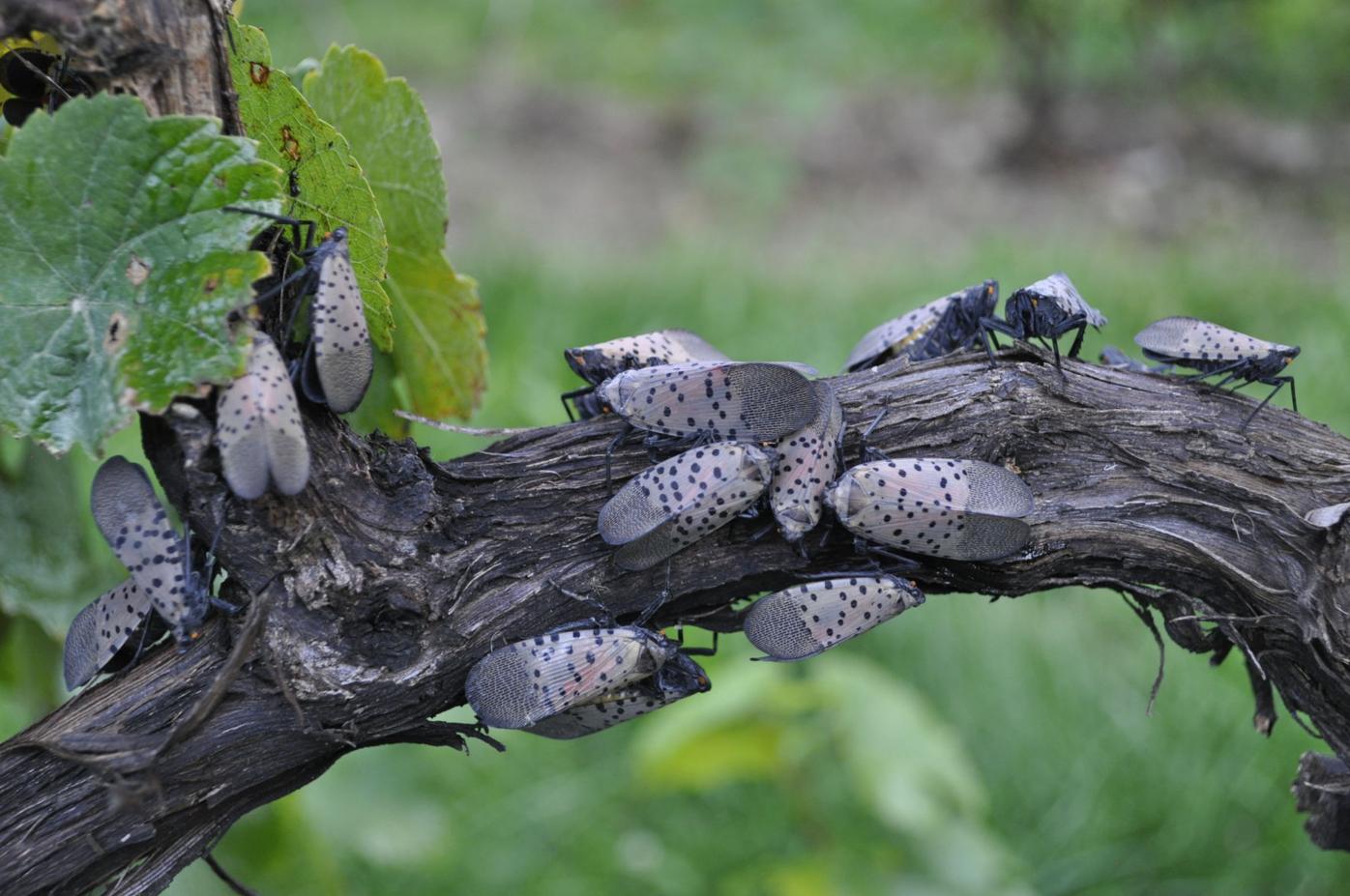 Spotted lanternflies feed on a grapevine.

Editor's note: This story was originally published in April. We brought it back because many spotted lanternfly eggs start to hatch in May.

As an ecologist, David Bowne has been aware of the destructive spotted lanternfly since it first arrived in Pennsylvania six years ago, but back then, Elizabethtown College was free from the invasive insect.

That changed last fall, when Bowne, an associate professor of ecology, and his students first noticed adult lanternflies and egg masses on campus, he said.

“It’s definitely getting worse,” Bowne said, describing the bugs’ trackable westward spread across Lancaster County and the rest of the state.

And as Pennsylvanians remain shut indoors to combat the COVID-19 pandemic, Bowne and other lanternfly experts warn that the insects’ behaviors remain unchanged.

That's a problem because coronavirus-related stay-at-home orders and social-distancing guidelines have complicated efforts to combat the insects’ spread.

Making matters worse, the virus hit after an especially warm and snowless winter, which likely allowed more of the flies’ egg masses to survive, Bowne said.

Those egg masses, laid in the fall, should begin hatching in the next few weeks, according to Heather Leach, Penn State Extension’s spotted lanternfly extension associate.

‘Slows down our work’

At Penn State, work against the lanternfly is ongoing despite the virus, she said. University experts continue to evaluate a fungus that could be used as a natural pesticide in lanternfly-infested areas.

“It kind of eats them from the inside out,” Leach said.

But before that fungus can be widely applied, researchers must make sure that it won’t negatively impact other wildlife species -- other bugs, plants and even birds, Leach said.

That work often sends researchers about 2½ hours from their Centre County campus to Berks County, where the insect, native to Asia, was first discovered in 2014.

Typically, those trips would involve carpooling and hotel stays, which both are no longer an option due to COVID-19, she said.

Backyard bonanza! Discover the wonders of nature with your kids this weekend

Day trips made in cars with single riders have become the new normal, and when working in the field, researchers remain 6 feet apart to obey social distancing, Leach said.

“Everybody is dealing with this kind of stuff,” she said. “We still plan on continuing that research.”

Tracking the insects in places like Altoona, Blair County, normally would require requesting access to private property, but Leach said interactions between researchers and the public have been put on hold due to concerns about the contagious, potentially deadly respiratory virus.

“It definitely slows down our work,” she said, hopeful the virus-related shutdown will be over by the time hatched lanternflies reach adulthood in July.

‘Not able to get out’

According to Bowne, adult lanternflies have strong, straw-like mouth parts, which they jam into plants, sucking out sugary liquids inside. The insects then secrete a sticky liquid, which coats those same plants and attracts destructive molds. Those molds can be devastating to orchards, vineyards and hardwood producers, he said.

The insect has no native predators in Pennsylvania, so experts have made public education a large part of their anti-lanternfly efforts. At home-and-garden shows and public festivals, they show photos of the black-and-red spotted lanternflies at different stages in their life cycles, encouraging people to squish and report the bugs and to scrape away egg masses.

During the pandemic, those events have been canceled, said Lois Miklas, a Lancaster County master gardener.

“It’s not good that we are not able to get out,” she said.

But information can still be shared digitally, including by Lancaster County Conservation District officials who have taken to social media to post anti-lanternfly messages.

“While following the stay-at-home order, residents could be looking for, scraping and smooshing egg masses on their property,” said Sallie Gregory, district education coordinator.

Some of the district’s lanternfly-related work had to be put on hold due to the virus, and Bowne said the same is true at his college, where students have been sent home and are unable to study the on-campus issue.

While outdoor recreation is permitted during the pandemic, Bowne warned that hikers, anglers and parkgoers should regularly check their vehicles and equipment for lanternflies to avoid transporting them from infested to non-infested areas.

“The accidental human transport of spotted lanternfly is the primary way it’s spreading across the state,” he said.

Lancastrians are starting to get their stimulus checks. What are you spending yours on? [survey]

The IRS has started to issue stimulus checks for qualifying Americans, and Lancastrians are starting to see payments.

How Lancaster County parks, rangers are responding to COVID-19

An annual accounting of air quality across the United States showed promising results in Lancaster County, which saw a decrease in both smog a…

The first local tick bite of 2020 was reported in January, months earlier than normal — a signal to Rita Rhoads that the disease-carrying arac…

It may be only a couple of weeks before clouds of mayflies blacken the skies above the Susquehanna River in northwestern Lancaster County, whe…

Soon, millions of mayflies are expected to make their annual flight over the Susquehanna River in Lancaster County, swarming so densely they’v…

Calls to rescue wildlife from spotted lanternfly bands are up; some animals don't make it [photos]

This spring, sticky bands around trees are catching much more than spotted lanternflies.

Marking the first Pennsylvania case of 2020, state officials announced Thursday that they believe they’ve identified someone suffering with We…

April is already shaping up to be an unforgettable month for Lancaster County. From barren streets to visiting grandparents through windows, L…