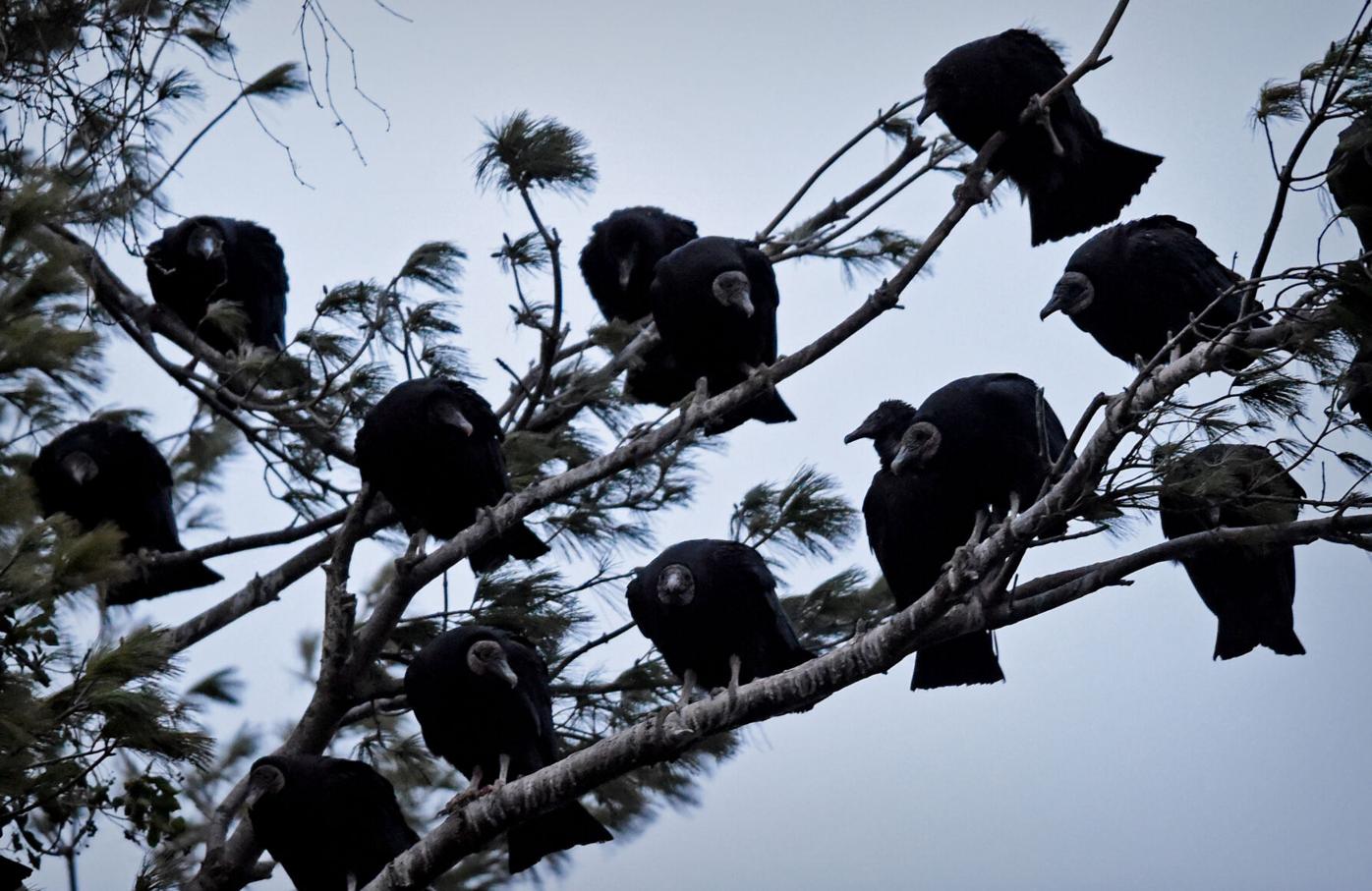 Black vultures gather in a tree in the 100 block of West Fairview Avenue in Marietta shortly after sunset Tuesday, Dec. 1, 2020. 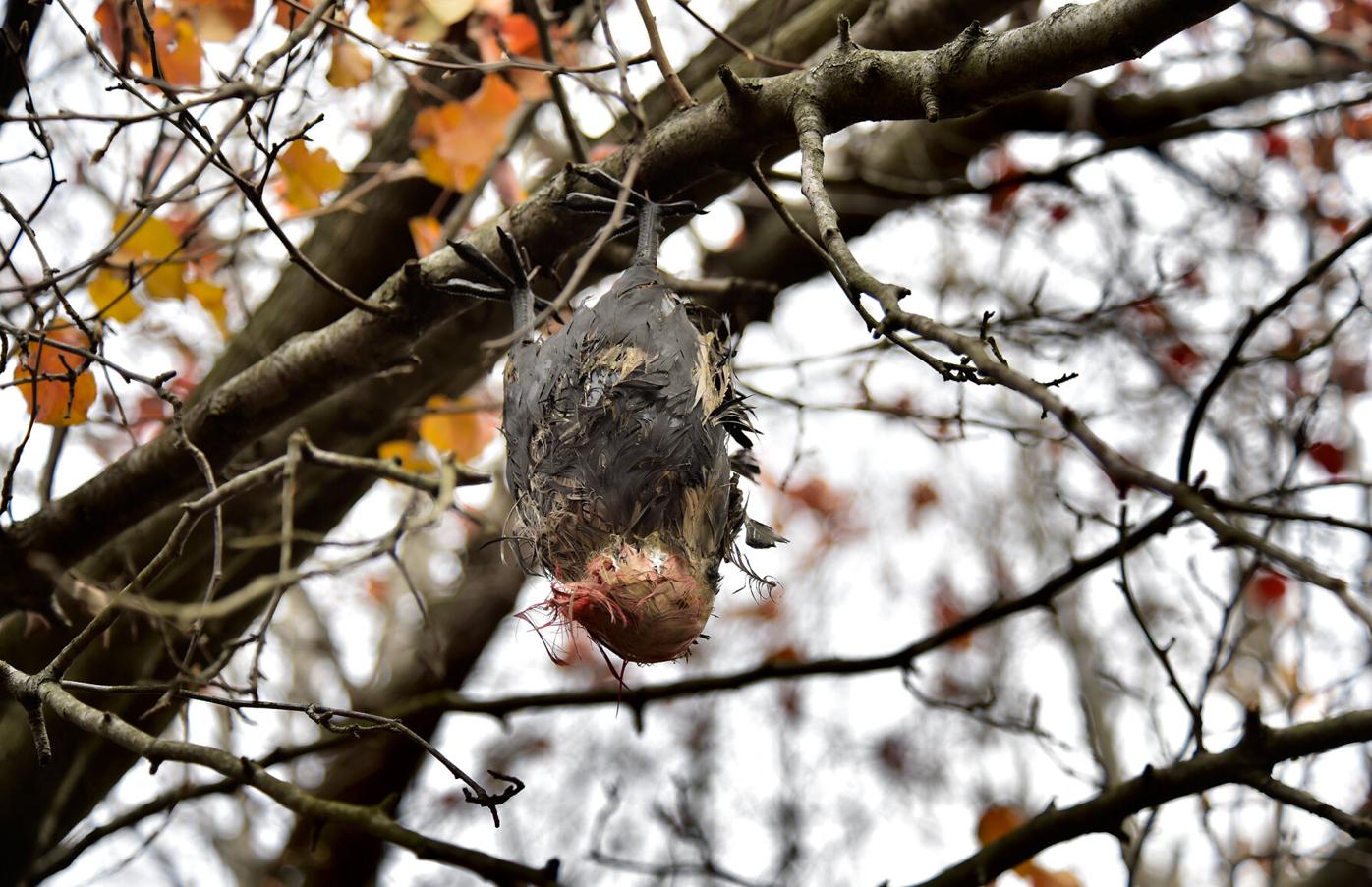 A fake vulture is pictured hanging on a tree between 264- 270 West Front Street in Marietta Borough, where vultures there are destroying homeowners’ property on Tuesday, December 1, 2020. 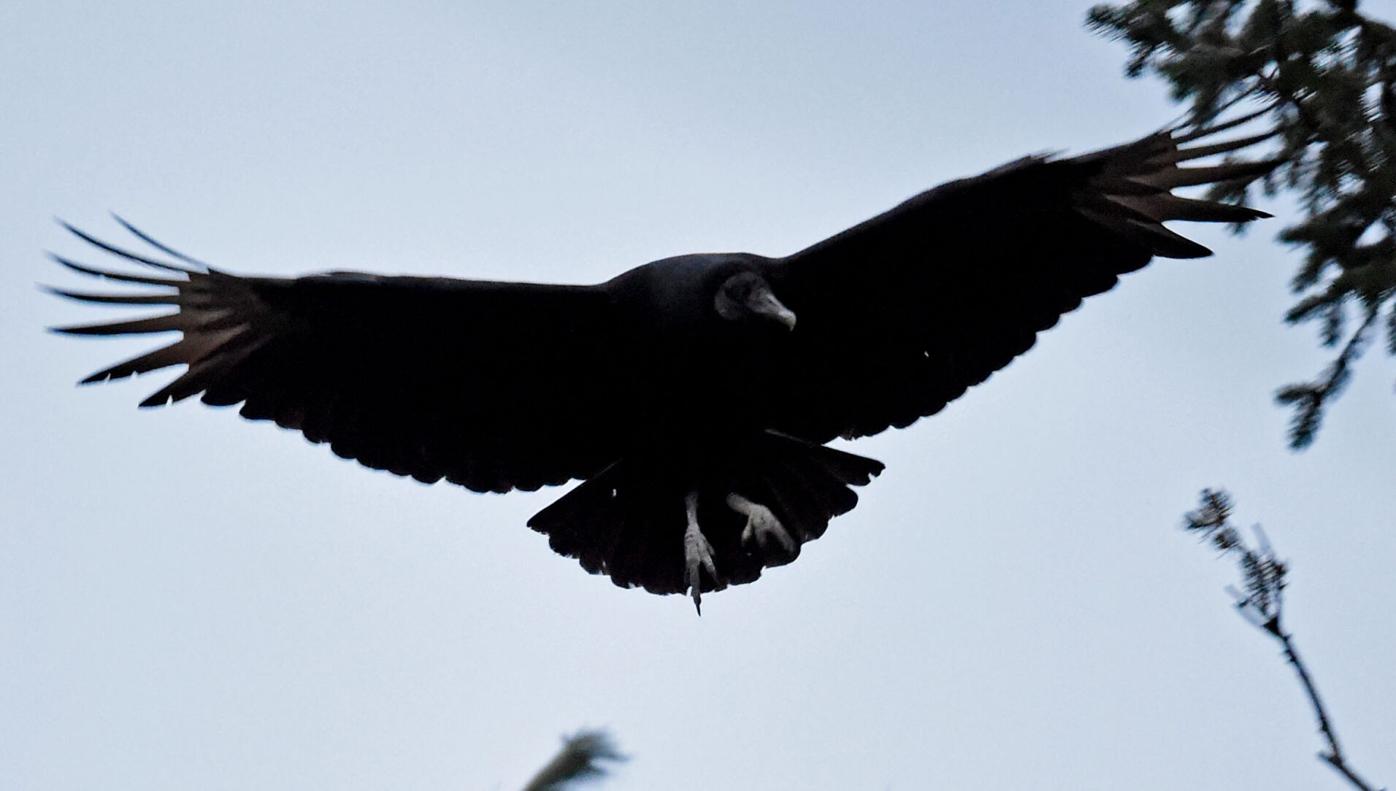 A black vulture flies over the 100 block of West Fairview Avenue in Marietta shortly after sunset Tuesday, Dec. 1, 2020. 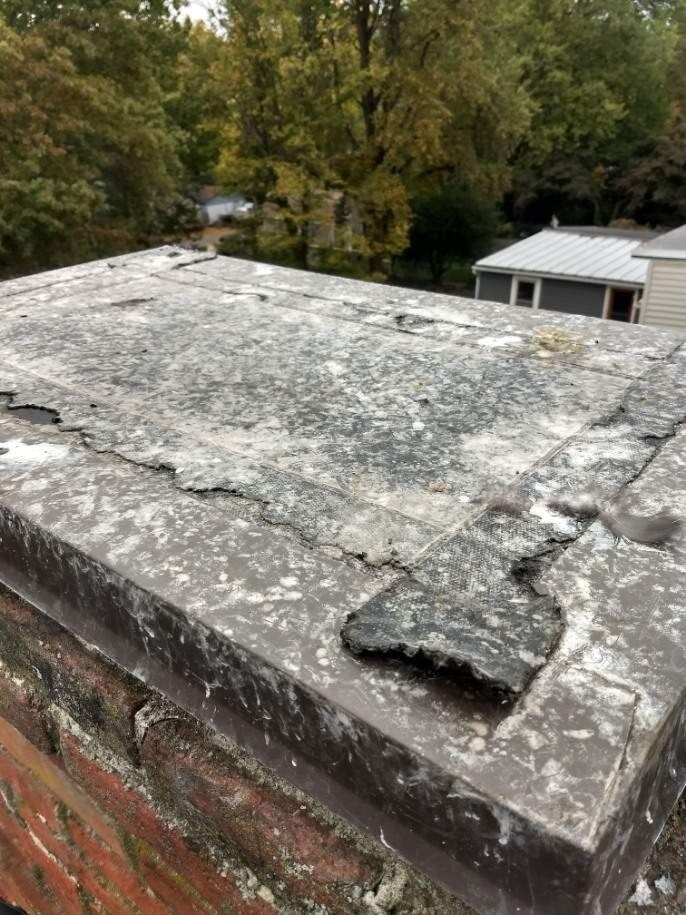 This photo submitted by a West Market Street resident shows a chimney cap that was damaged by black vultures, which have taken up residence in trees and atop roofs in Marietta Borough. 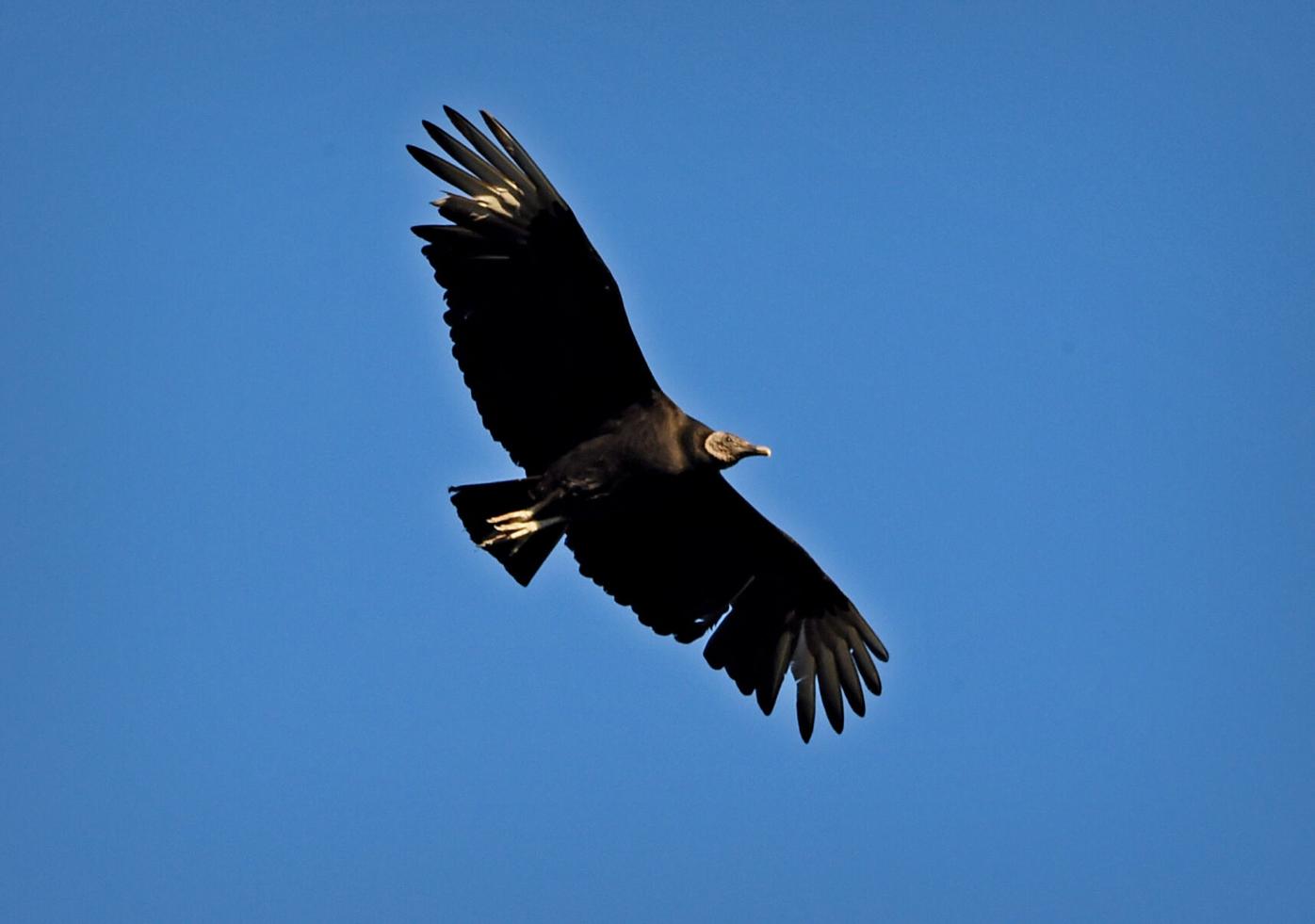 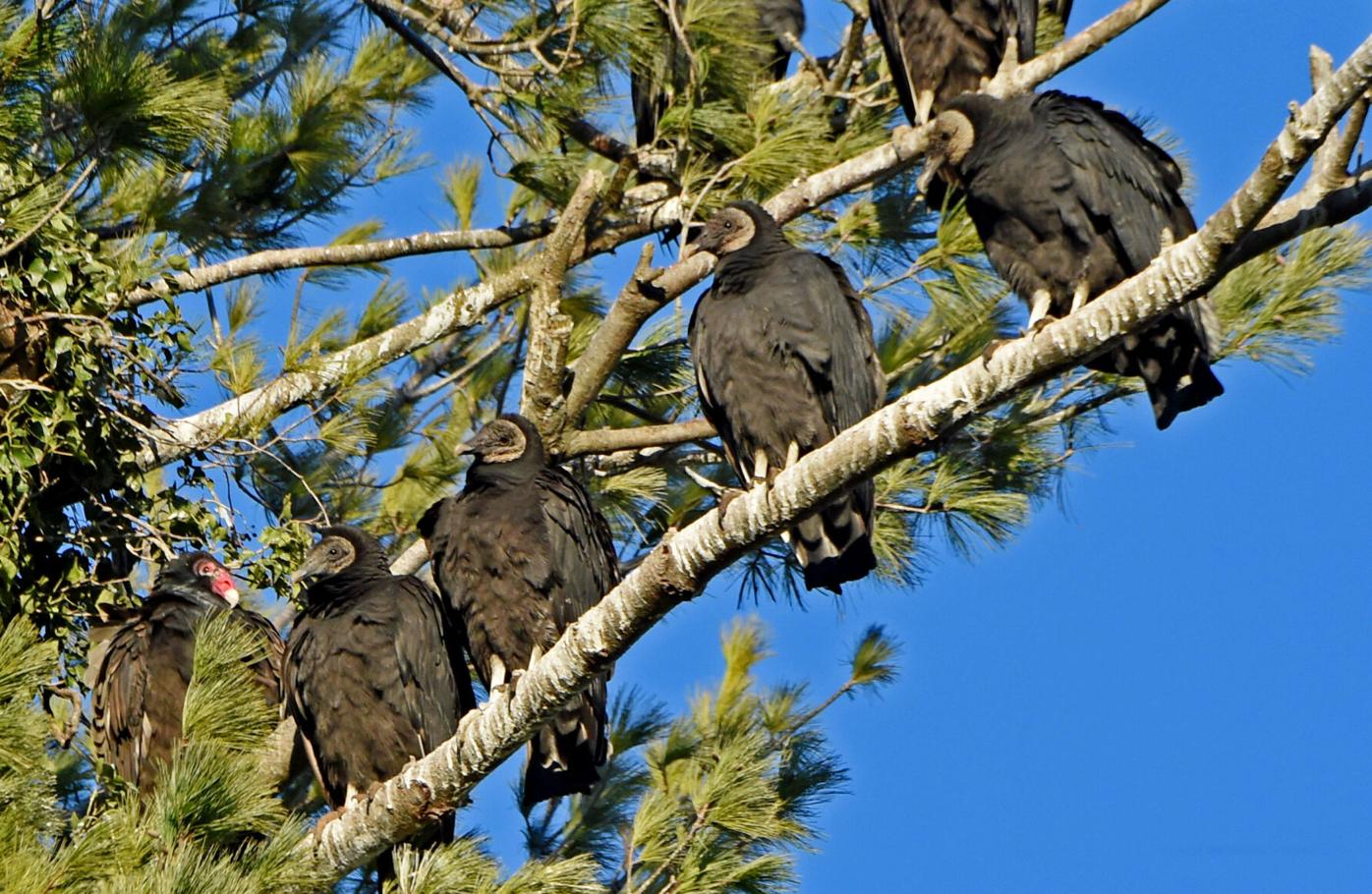 Black vultures and a turkey vulture, left, gather on a tree along West Fairview Avenue in Marietta Borough Wednesday, Dec. 2, 2020. 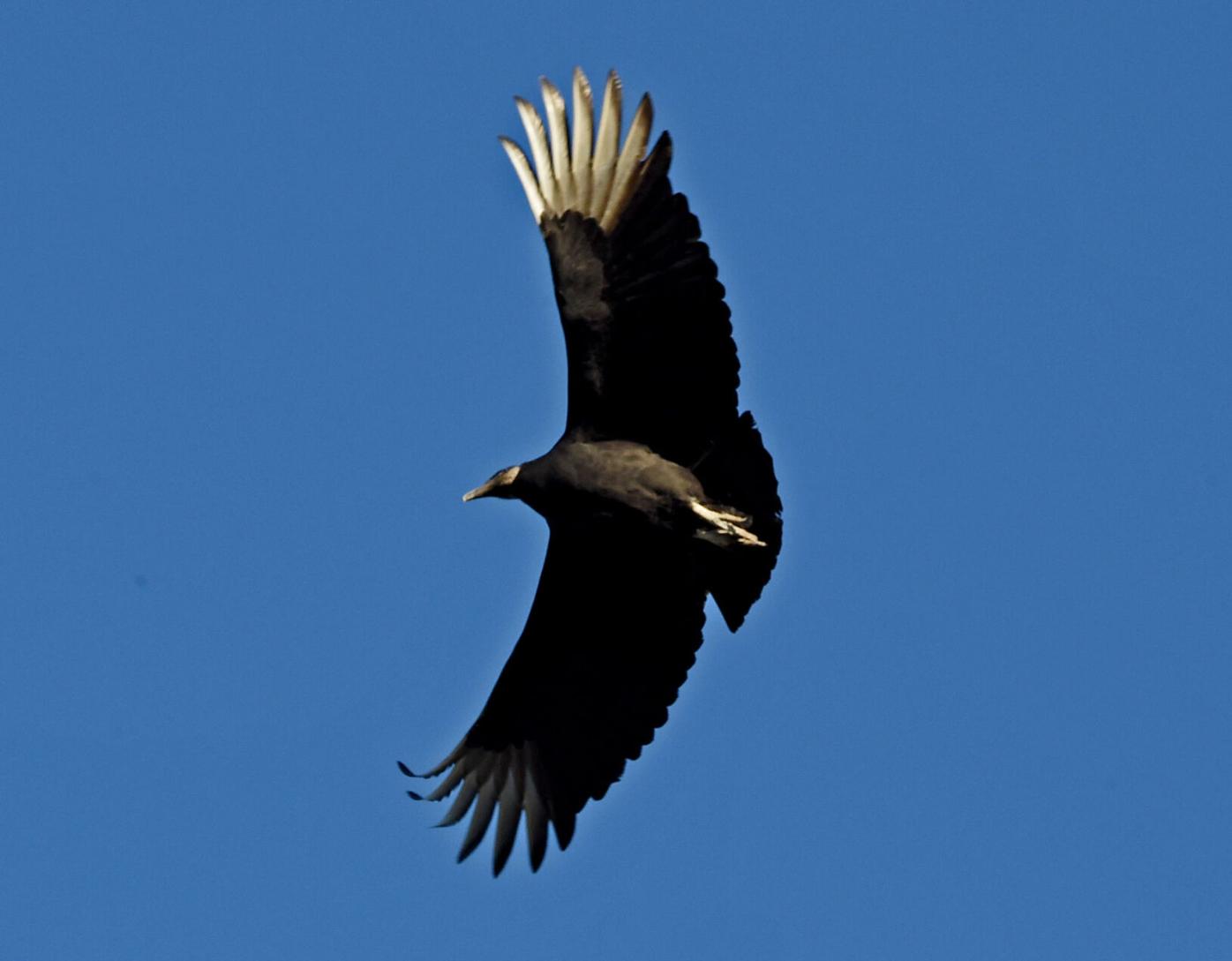 Black vultures gather in a tree in the 100 block of West Fairview Avenue in Marietta shortly after sunset Tuesday, Dec. 1, 2020.

Black vultures and a turkey vulture, left, gather on a tree along West Fairview Avenue in Marietta Borough Wednesday, Dec. 2, 2020.

Enterline knows those sounds are expressions of the neighborhood’s frustration -- homeowners doing whatever they can to scare away hundreds of black vultures that crowd local rooftops and trees.

The large birds are more than unsightly. They cause thousands of dollars in property damage, ripping off shingles and tearing at rubber roofing materials with their beaks.

It’s damage that homeowners claim they are unable to guard against due to the vultures’ federally protected status. The birds, native to the eastern U.S., cannot be exterminated without federal permission.

That’s a problem, Enterline said, noting his rooftop has been repeatedly ruined by the birds. To date, Enterline said he’s spent several thousand dollars on repairs.

“This is the worst year,” Enterline said. “There are many more of them.”

Enterline described the scene on West Market Street’s 200 block, where he said hundreds of the large birds can be seen sunning themselves on rooftops and roosting in trees.

Those trees, he said, become so saturated with bird droppings that they are nearly painted white.

That’s common behavior for black vultures, which like to roost in large numbers, according to Bob Schutsky of the Lancaster County Bird Club.

Black vultures get their name from their dark-colored heads that set them apart from red-headed turkey vultures, which are a similar but separate species, Schutsky said.

Though the two species can be seen together, Schutsky said black vultures are more aggressive and destructive, which explains the damage in Marietta.

The birds are notorious for the type of destruction described by Enterline and his neighbors, Schutsky said. He came to know black vultures years ago while leading bird-watching tours in Florida’s Everglades. In nearby parking lots, visitors were asked to cover their vehicles with tarps. If left uncovered, the vultures often would tear apart windshield wipers and rip rubber weatherstripping from around windows, he said.

“They have a fetish with rubber,” Schutsky said, “but it’s not well understood.”

Aaron Haines, a conservation biologist at Millersville University, said there’s likely a clear explanation for why the birds are a common sight atop Marietta homes.

In the fall and winter, he said, the birds “form large roosts at locations that make them safe from predators, provide warmth and give them relatively close access to food.”

That explanation is backed by observations from Enterline, who said the birds can be spotted in the borough all year, but they move further inland and amass in greater numbers on local rooftops beginning in early fall, remaining in those areas until spring.

Experts said black vultures are becoming more common in the northeast, especially in places along the lower Susquehanna River like Marietta.

The birds, which can boast wingspans greater than 5 feet, are a conservation success story, according to Sean Murphy, a Pennsylvania Game Commission bird expert. Bans on the use of DDT and other harmful pesticides and chemicals benefited wild birds of all kinds, especially big ones like vultures and eagles.

On top of that, the vultures are protected by a federal law, passed in 1918 to guard native bird populations, which were dwindling due to the commercial trading of feathers, including within the fashion industry.

Because of that protection, state game officials typically have to pass vulture-related complaints to federal wildlife experts, Murphy said.

That means Marietta residents like Amy Welsh have had to learn to live with the birds, she said, sharing receipts for costly roof repairs. Homeowners’ insurance won’t cover damage caused by wildlife, she said.

She also shared photos of black vultures gathering by the dozens. In some images, the birds are perched on patio furniture, which they also have pecked to shreds, according to Welsh.

“They seem to be really drawn to anything that is plastic or rubber,” she said, showing images of turned-over trash cans spilling garbage across lawns. “They have been really destructive.”

Welsh said she and some of her neighbors have come together to keep a running tally of the damages and their costs. Maybe, she said, that information will help them leverage some relief.

Welsh said she’s presented her concerns to state and federal lawmakers, as well as local officials. So far, she said, none of that has helped.

Time for a new approach

Solutions exist and have been deployed in communities that have faced similar vulture-related troubles, according to Harris Glass, Pennsylvania director with the U.S. Department of Agriculture’s Wildlife Services department.

Researchers are currently working to thin a large, destructive population of black vultures in neighboring Dauphin County, Glass said. There, they are also tagging the birds, hoping to learn more about their exact population size and migration patterns, he said. That’s in addition to keeping records of problem sites and damages.

Vultures have a history of nuisance behavior in Lancaster County. Complaints about vulture-related destruction have been voiced at public meetings for at least a decade in places like Manheim and Columbia boroughs and West Cocalico Township. In the Manheim case, complaints were made as recently as February.

The solution, typically, is persistent harassment -- scaring the birds away with loud noises or fireworks, Glass said. He said that method is more than 90% effective.

In other cases, homeowners can seek permission to place taxidermied vultures at problem sites.

“They are scared of their own dead,” Glass said.

This tactic is already being used with some success in Marietta, where fake dead vultures were placed along some public portions of West Front Street, borough secretary Sharon Bradnick said.

But Welsh said those effigies can cost homeowners hundreds of dollars. Bradnick said borough officials historically have held the position that public funding and resources cannot be used to benefit private property.

According to Borough Councilman Bill Dalzell, it might be time to revisit that position, especially because he fears that vulture-related destruction could become a boroughwide issue. He too has a tree that has been “whitewashed” with vulture droppings, though his rooftop has been spared.

Requiring homeowners to deal with the vultures at a neighborhood level might simply scare the birds to another part of Marietta, where they’ll repeat their bad behavior, he said.

Instead, Dalzell said he hopes to find a wholesale approach, which likely would require cooperation with private homeowners.

“I think any program going forward would have to incorporate both,” he said, adding he plans to bring up the issue at upcoming committee meetings.

In the most severe cases, federal permits also allow birds to be killed, Glass said, explaining the “lethal removal” of one or two birds will often scare away any others.

On Tuesday, Bradnick said borough officials have not pursued that lethal option. Dalzell said it might be worth pursuing.

“I would certainly look into it and consider it,” he said. “I think the borough has a responsibility.”

An animal welfare group has filed a complaint with the U.S. Department Agriculture over the death of a research monkey at Franklin & Marsh…

Traffic on a narrow lane stretching through farmland has divided neighbors in rural Mount Joy Township, where, as a result, officials have bee…

On Thursday, Michael Kuriga described a typical hunting trip — walking alongside a trusted dog through fields, brush and brambles while trying…