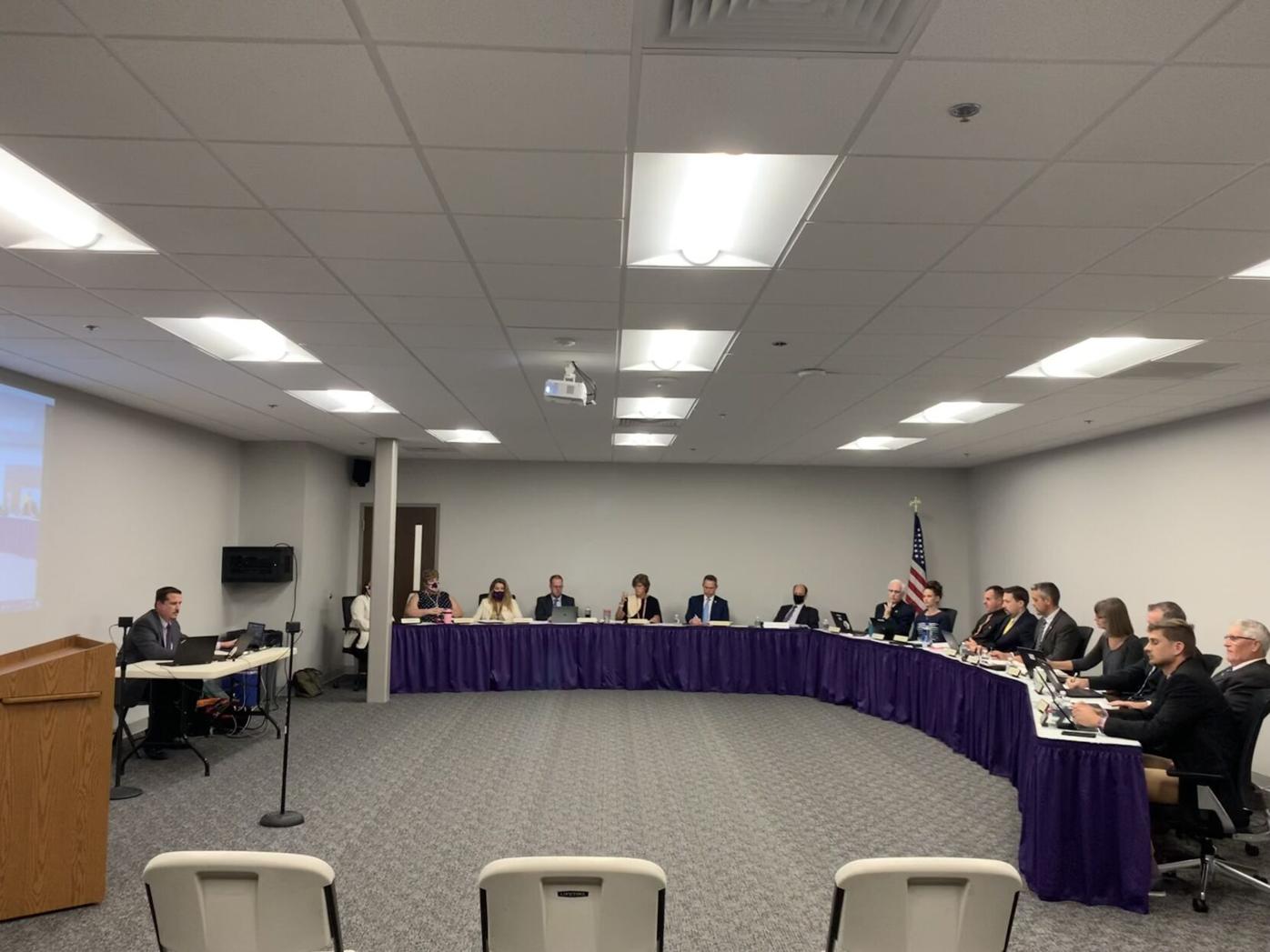 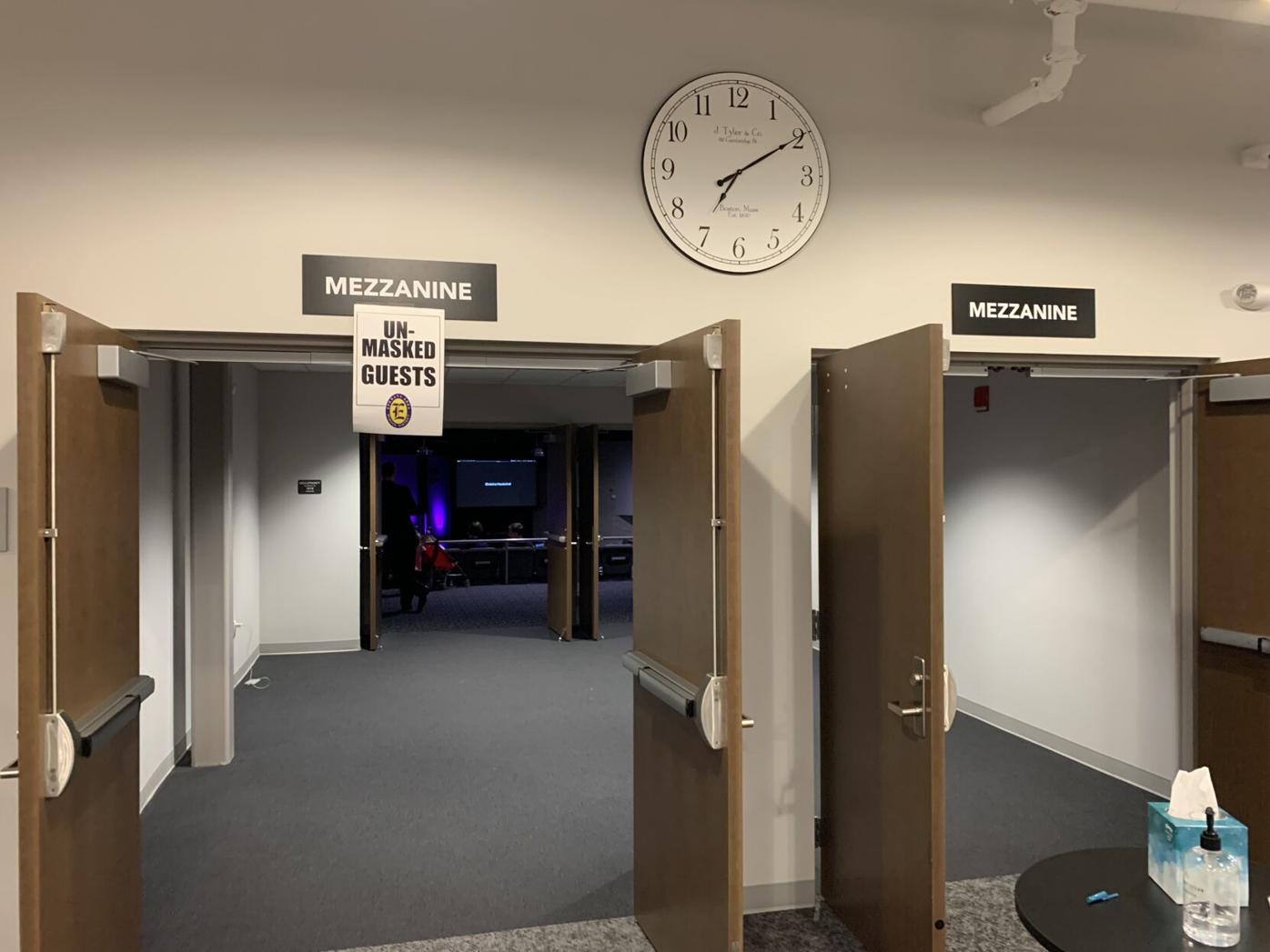 A sign is seen designating the Ephrata Community Church auditorium for unmasked guests.

The Ephrata Area school board late Monday night rejected a proposal that would have permitted exemptions from the Pennsylvania Department of Health’s school mask order with a parent’s note rather than medical documentation.

The board voted 7-2, with David Wissler and Philip Eby in the minority voting yes. If passed, the measure would have made Ephrata Area the only Lancaster County school district other than Eastern Lancaster County to give parents, not doctors, the sole decision-making ability regarding whether their children should have to wear a mask in school.

As of Sept. 7, students, faculty, staff and visitors are required to wear a mask when inside school buildings to help stem rising COVID-19 cases statewide, per Acting Secretary of Health Alison Beam’s order.

While the order doesn’t outline a specific process for exemptions, follow-up directives from the state Department of Education stated schools should only allow exemptions of the order after exhausting alternative face coverings, such as a face shield, and exempt only students who provide documentation of a medical or mental health condition or disability that precludes them from wearing a mask.

Well over 100 residents attended Monday’s meeting, which lasted about four and a half hours and featured more than 70 public comments in-person and online via Zoom. The meeting was held at Ephrata Community Church to accommodate the large crowd and their mask preferences, according to the district.

The meeting was conducted in a rather peculiar way. The board met in a conference room in the church while a livestream played for residents in the main auditorium, which was designated for unmasked guests. A separate room was set up for masked guests, but nobody showed up. There were, however, a number of pro-mask residents attending online.

What’s more, at least two board members have ties to Ephrata Community Church, further calling into question how and why the meeting was arranged this way. The church’s website lists board Vice President Chris Weber as a pastor of student ministry as well as an elder. School board member David Wissler’s LinkedIn page states he served on the church’s administrative staff from 2012 to 2015 and served on the board from 2014 to 2017.

During the public comment period, the board accepted comments over Zoom and then brought about eight in-person speakers at a time into the conference room to address the board. They were limited to three minutes each, though board President Richard Gehman had to repeatedly remind some residents their time was up.

The vast majority of those who addressed the board were in favor of the failed proposal. Several of them wore shirts supporting the far-right grassroots group Unmask Ephrata. Fittingly in a church, many spoke in religious terms.

Angie Lehman said board members are in a fight against good and evil, and they should not live in fear, because fear is not from God.

“Pick up your sword, pick up your shield. Recognize that you’re on the battlefield, and fight for our children,” she said.

Others expressed concern over what might happen if the government decides to issue another mandate – say, for the COVID-19 vaccine.

“To some degree, I see the local school board losing their power if, now, they don’t stand up and say, ‘Hey, we don’t think this is right,’” he said.

Some were a bit more unfiltered with their opinions on masks and vaccines.

“Children are being ripped out of classes because they refuse to put repurposed panties on their face,” Jamie Montgomery said.

Amanda Witmer told board members that children are being “asked to wear diapers on their faces to cover your butts.”

Another parent suggested, without evidence, that vaccinated teachers are somehow infecting students and making them get nosebleeds.

Among the pro-mask speakers was Kelly Clark. She said some parents actually don’t always have their best interests in mind. If they did, “Child Protective Services wouldn’t exist wouldn’t exist, would they?” she asked. She said parents routinely rely on doctors and other professionals to make important decisions for their children.

During the board discussion, school board President Gehman gave a passionate speech about following convictions – in this case, respecting authority.

He was in clear distress when making his remarks. He said his heart goes out to every kid who may be struggling with mental health issues due to the mask mandate, but there are times in life when things are taken out of our control – and this is one of them, he said.

Wissler, often the most outspoken board member against the mask mandate, was less demonstrative Monday night than he was at prior meetings, when he was applauding only for anti-mask residents.

Wissler did, however, push back on Gehman’s convictions speech. He said he prays for discernment to know what is right and wrong. And, he said, “Part of discerning is looking at the fruit of the spirit. The fruit of this mask order is confusion and chaos.”

A Lancaster County school district is sounding the alarm on employee shortages fueled by the COVID-19 pandemic that, if not remedied soon, may force the entire district to periodically shut down in-person learning.

The Ephrata Area school board declined to sign the school district onto a high-profile lawsuit attempting to overturn the Pennsylvania Department of Health’s school mask order.

According to Penn Manor Superintendent Mike Leichliter, 128 students out of 5,468 – 2% of the district’s student population – did not comply with the mask requirement and, therefore, were not allowed to participate in regular classes on Wednesday.

Middle and high school students in the Eastern Lancaster County School District will learn virtually until Monday as the district deals with a surge in COVID-19 cases at the Garden Spot High School Secondary Campus.