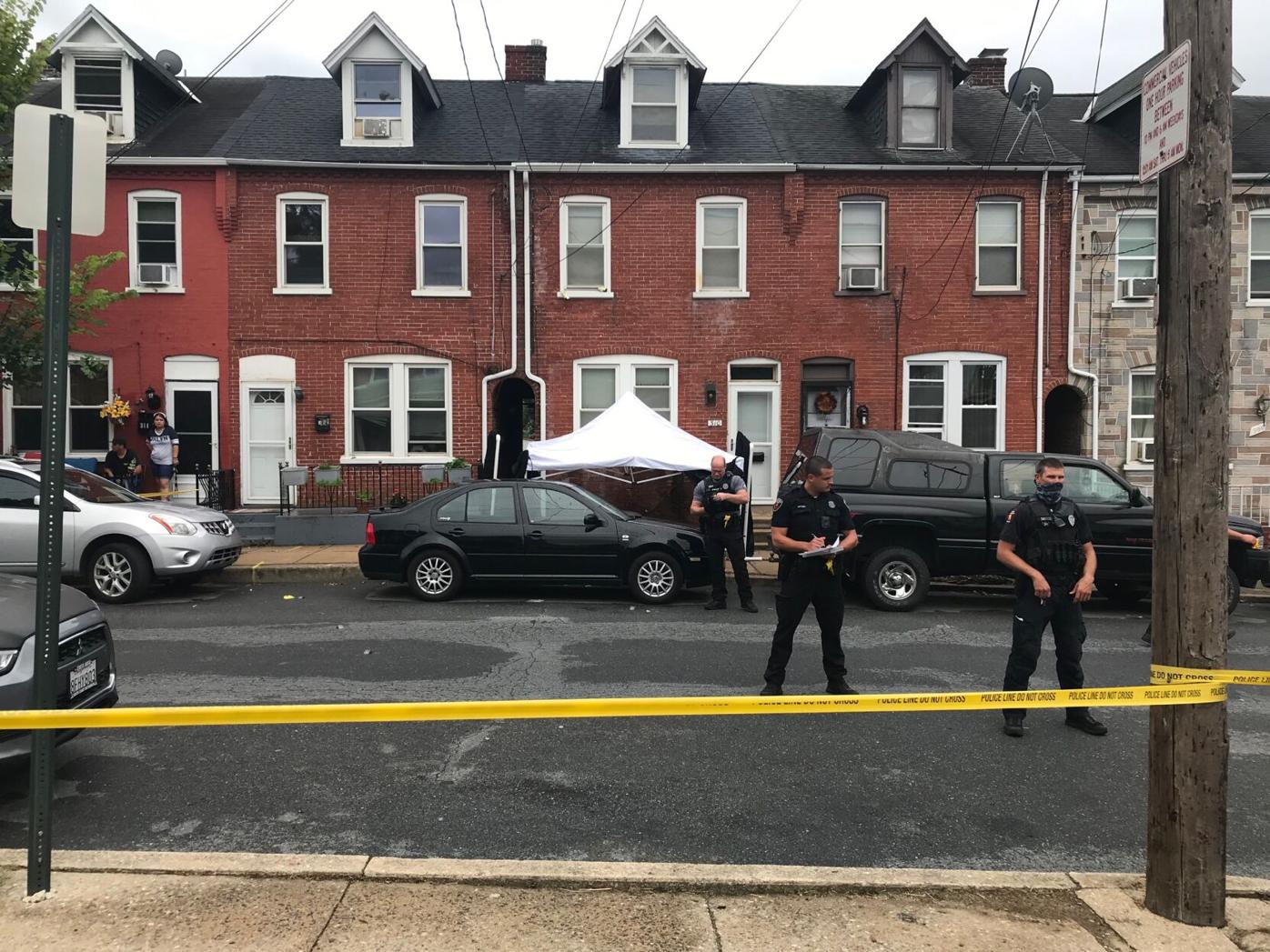 Police stand guard over the scene where a Lancaster city officer shot and killed a knife-wielding man in the 300 block of Laurel Street on Sunday, Sept. 13, 2020. The body of Ricardo Munoz is under the white tent. 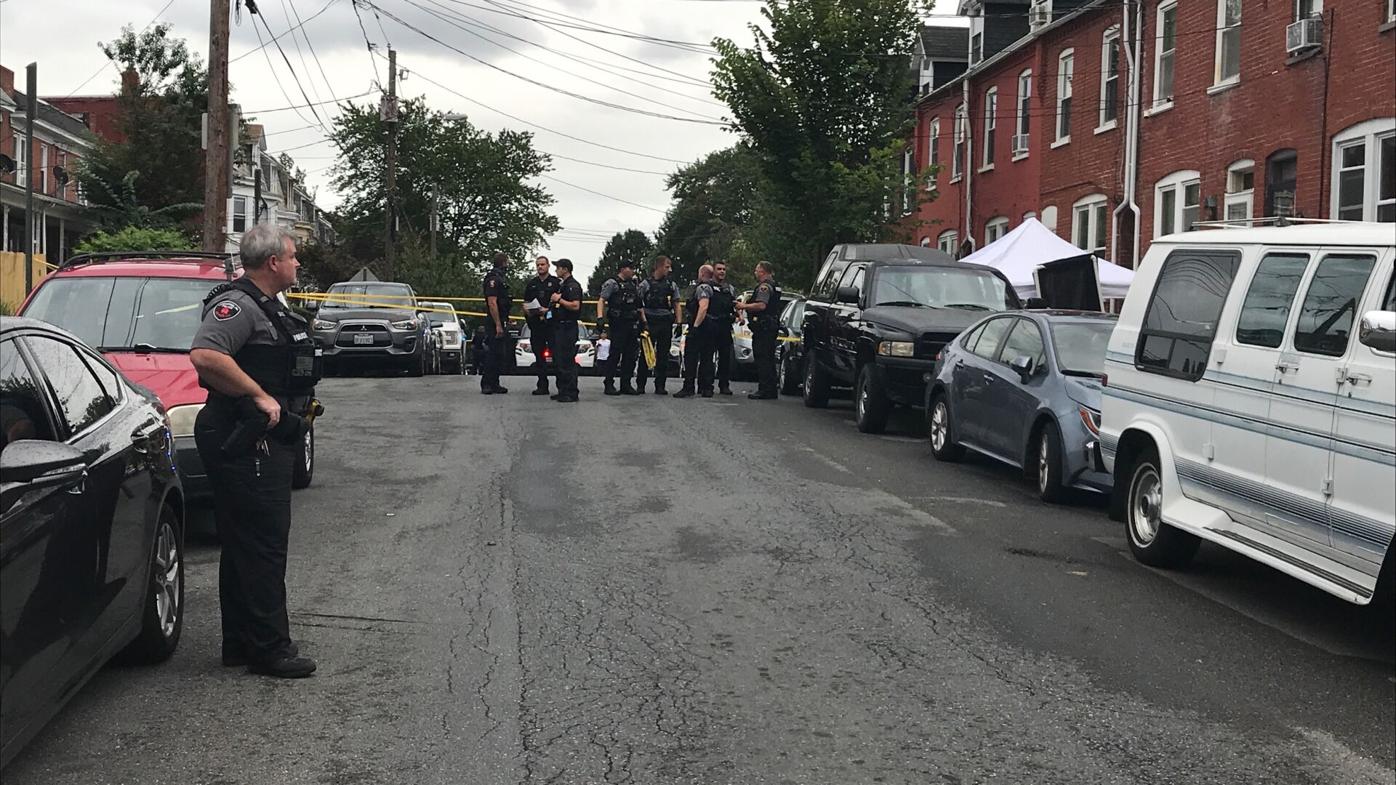 Police assemble where a Lancaster city officer shot and killed a knife-wielding man in the 300 block of Laurel Street on Sunday, Sept. 13, 2020. The body of Ricardo Munoz is under the white tent at right.

Police stand guard over the scene where a Lancaster city officer shot and killed a knife-wielding man in the 300 block of Laurel Street on Sunday, Sept. 13, 2020. The body of Ricardo Munoz is under the white tent.

Police assemble where a Lancaster city officer shot and killed a knife-wielding man in the 300 block of Laurel Street on Sunday, Sept. 13, 2020. The body of Ricardo Munoz is under the white tent at right.

Editor's note: An earlier version of this story said Jeromey Barnes had been fatally shot. He was not. And it said city detectives were investigating the shooting; county detectives are. The story has been corrected.

The Lancaster city police officer who shot and killed a man Sunday afternoon "is doing as well as can be expected" and is being provided counseling and other help, the police chief said Tuesday.

"The gravity of an officer-involved shooting weighs heavily on an officer and his entire shift and the entire police department. You were just responsible for taking another life," Chief Jarrad Berkihiser said, calling it a life-changing event.

It also affects the officer's family and extended family, he said, adding that counseling is being offered to the officer.

Authorities aren't releasing the officer's name, nor his rank or years with department. This is a standard practice, as the circumstances of the shooting remain under review by the Lancaster County District Attorney's office.

It’s not known how long the investigation will take.

“We are conducting a thorough investigation of the officer’s use of force and all surrounding circumstances,” said Brett Hambright, the office’s spokesman. “We would not want to guess or even estimate a timeline, but can say the investigation will be comprehensive.”

After she reviews the investigative materials, he said, Adams will make determination and publicly announce her the findings.

Within two to three days, an officer involved in a shooting undergoes "critical incident stress management," Berkihiser said. The officer must also see a psychologist before being able to return to work.

"Most officers go their entire career without shooting somebody and that's the way we want it, Berkihiser said. "We would much rather save a life than take a life."

The last time police shot someone in Lancaster County was Feb. 19, 2019, when a Pennsylvania State Police trooper shot Jeromey Barnes, 37, while trying to apprehend him. The shooting was ruled justified in May 2020.

Avenia was holding a woman at gunpoint inside a city home in the 500 block of Pershing Avenue, according to the Lancaster County DA’s office. The shooting was ruled justified on Nov. 30, 2018.

Based on statistics he's familiar with, Berkihiser said if officers involved in a shooting does not get proper psychological help, they are likely to leave the job within five years and are at a higher risk for suicide.

"Since I've been an officer with the department we've experienced three suicides" tied to traumatic incidents, Berkihiser said. "If we don't get on the right path, (post-traumatic stress disorder) can spin out of control."

"They can't take law enforcement action unless a life is in immediate danger," he said.

Presuming administrative procedures were followed, an officer on paid administrative leave might do such things as take reports by phone or other paperwork — that is if the officer is well enough to return to work, Berkihiser said.

"That's happened in the past (but) not necessarily with officer involved shootings," he said. "It could be an officer who experienced something tragic and needs help. Everybody is different just like every situation is different."

Patrick Shaver is a former Atlanta police officer and current reserve deputy with a sheriff's department in Virginia and a documentary filmmaker.

In 2017, he released "Officer Involved," a film based on some 100 interviews with police officer around the country who had shot someone.

"While we teach officers how to shoot, when to shoot and why to shoot, we're not very good at teaching officers what happens after the shootings. And that is a psychological process," he said.

He found officers' responses varied, as do departments’ policies for handling these incidents.

"One (reaction) that comes to mind is regret and questioning as to whether they made the most appropriate action," Shaver said, even in justified shootings.

However, he said, with proper help, he's found most officers are able to return to work.

More in The coverage so far: Police shot, killed man in Lancaster city; the impacts, ruling and consequences (16 of 34)

A Stevens man spat in an officer's face and pushed him when police responded to his home on Sept. 9 after the man’s roommate had called police…

Update: Read about the updates for bail modification for Lancaster protesters.

Why was Muñoz's body left on the sidewalk for 4 hours and where was the ambulance?

Ricardo Muñoz's body was left on the ground for four hours after he was shot by a Lancaster police officer Sunday afternoon.

When a 27-year-old man was fatally shot by a Lancaster police officer last Sunday afternoon, it immediately set into motion a two-track review…

The mother of Ricardo Muñoz, the mentally ill Lancaster man who was shot and killed by a city police officer in September, on Monday filed a w…