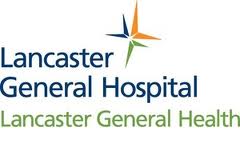 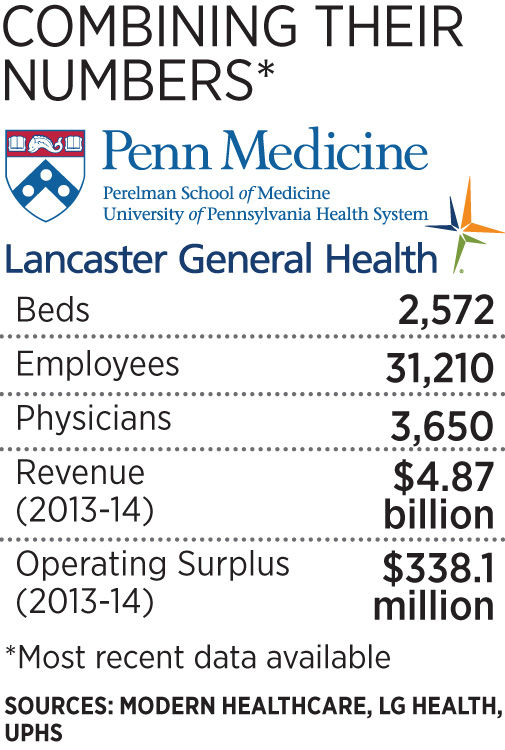 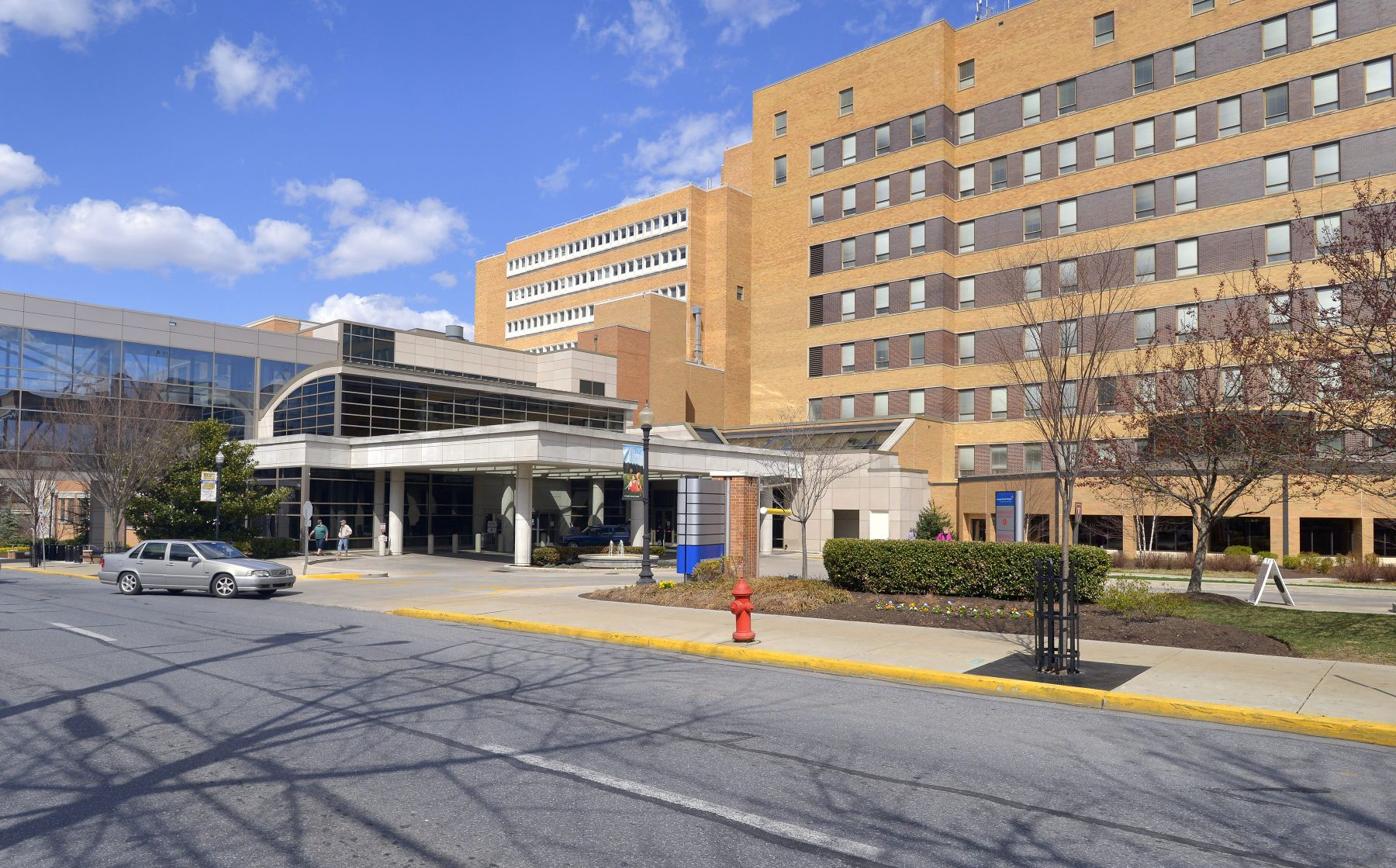 The two health system CEOs stood at the podiums, asserting that the merger of their massive institutions would result in better outcomes and lower costs.

The new, combined system would have greater geographic reach and financial brawn. The increased “scale” would benefit both the health system itself — and also its patients and the community at large.

These assurances came last week from Tom Beeman and Ralph Muller, the respective chief executive officers of Lancaster General Health and the University of Pennsylvania Health System, as they announced an agreement to join the two systems.

But the exact same rationale — the same terminology — was used last September in Illinois, when the CEOs of Advocate Health Care, the state's largest system, and NorthShore University HealthSystem, the dominant health network in Chicago's northern suburbs, announced plans to merge.

In the health care world, the big are getting bigger; consolidations and mergers like the proposed marriage between LGH and Penn Medicine — and what's happening in Chicago — are hardly unique.

But there is one unique aspect to the Chicago deal: The Federal Trade Commission is taking a closer look at the proposed merger — which experts say is an indication that the agency is taking new interest in the creation of what might called regional supersystems.

Could the LGH-Penn Medicine deal be singled out by the agency? Lancaster General and Penn Medicine officials say they doubt it, asserting that health care in this part of Pennsylvania remains remarkably “diffuse.” The FTC won’t comment on pending mergers or divulge whether it plans to investigate one.

But earlier this year, Edith Ramirez, FTC Chairwoman, said the agency has  begun to “hear growing concern that provider consolidation in non-overlapping product or geographic markets may also lead to higher prices.”

Dr. Leemore Dafny, the Herman Smith Research Professor in Hospital and Health Services at Northwestern University’s Kellogg School of Management, said a growing body of evidence shows that intrastate “cross-market” deals lead to price spikes. But that doesn’t mean the FTC will take a keen interest in the local deal, as every merger is different in terms of how it affects the competitive landscape.

The proposed LGH-Penn Medicine deal would unite two of the biggest health care systems in the state.

The resulting system would still be dwarfed by Pennsylvania’s biggest regional supersystem, though.

If the FTC — and the federal Department of Justice, and the Pennsylvania Attorney General’s office, which also have to sign off on mergers — gives the go-ahead, the Penn-LGH system would boast more than 2,500 beds, 31,000 employees, and annual revenue of nearly $6 billion.

That figure would still be far below the $11.4 billion generated by UPMC, the University of Pittsburgh Medical Center, which itself has gobbled up several regional heath care systems and hospitals, expanding its geographic reach.

Other huge deals are in the works in Pennsylvania. Pinnacle Health and Penn State Hershey Medical Center are set to merge, pending regulatory approval. That deal would create a system with some $2 billion in combined annual revenue. Penn State Hershey also announced in January it would acquire Reading-based St. Joseph Regional Health Network.

None of the deals have attracted regulatory scrutiny. And the vast majority of these transactions are allowed to proceed after the FTC and Department of Justice have done a preliminary review, said FTC spokeswoman Elizabeth Lordan.

Experts say FTC scrutiny has tended to focus on “horizontal mergers,” combinations in the same market where rivals are competing for patients. But “there have been an increasing number of cross-market mergers in recent years,” said Dafny, creating systems that span multiple markets. The FTC and Department of Justice are increasingly interested in these mergers, she said, because “what the evidence shows fairly convincingly is that on average, these acquisitions, when they’re not too far away and in-state, tend to lead to price increases.”

Several factors could drive the price hikes, she said. For example, a customer who lives in Lancaster but works in Philadelphia might want coverage at hospitals both here and there. Were those hospitals or health care systems to merge, they could have an advantage in negotiations with insurance companies.

Another factor might be the “common insurer” effect: “If you’re negotiating with the same insurer in different markets, when you’re under the same ownership it gives you extra leeway in where you take your margin” she said.

In other words, prices could rise in one market in order to keep them low in another. “Whether that kind of effect is something the antitrust laws can get at, I don’t know.”

Mitchell Raup, an attorney with Polsinelli, a national firm with expertise in health care issues, told ModernHealthcare.com earlier this month that “this is a new area and it’s not clear where the FTC will go with this.. The FTC may take a harder look at it than you’d expect.”

Asked at last week’s press conference announcing the merger whether he expected the FTC to scrutinize the deal, Penn Medicine CEO Robert Muller said no. “Of the 15 biggest health systems in the country, this is the least concentrated market,” he said. “In just the area right around Philadelphia, there are 70 hospitals.”

While the FTC does not challenge many, the agency has litigated and won three hospital mergers in recent years, and experts say that’s sent a message that the agency  is taking more interest in such deals.

In the Chicago-area case, the agency requested more time and information to review the proposal. This so-called “second request” allows the commission an additional 30 days “to complete its review and take action if necessary,” said spokeswoman Lordan.

Officials at the Chicago-area hospitals say they’re undaunted. Lordan noted that after the 30-day period is up, the FTC could close the investigation, enter into a settlement with the companies, or take legal action in federal district court in order to block the deal from going forward.

More in Lancaster General Health Merger With the University of Pennsylvania Health System: Everything You Need to Know (1 of 30)

“When one health care provider can dominate the market, those who shoulder the cost of care — patients, employers, insurers — are the biggest losers,” Becerra said. “Today’s settlement will be a game-changer for restoring competition in our healthcare markets.