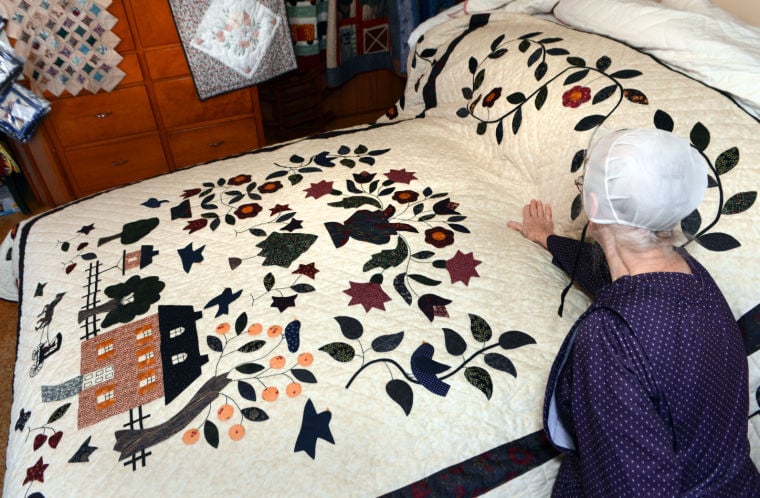 Emma Witmer shows one of her designs in her shop that she calls "Emma's Homestead". 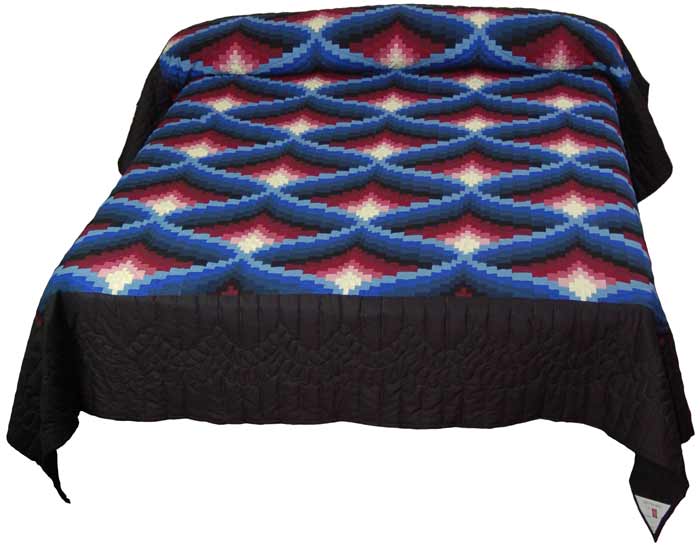 Emma Witmer shows one of her designs in her shop that she calls "Emma's Homestead".

Quilters, drop your needles.  Or at least pause and double-check what pattern you are quilting.

From now on, Light in the Valley, a quilt pattern that creates an optical illusion that lends it a three-dimensional effect, can no longer be quilted.

That particular pattern has been copyrighted, and Almost Amish, the company that bought the copyright, has sent letters from its attorney to representatives of Lancaster County quilt shops and nearly every volunteer fire company here that hosts a mud sale, telling them to cease and desist selling that quilt.

Not exactly what quilters and quilt sellers like to hear.

"I was shocked. I had no idea it was copyrighted," said Emma Witmer, of Witmer Quilts in Leola. "I don't think it's something a Christian would do."

Witmer said she sells about 500 quilts a year and has her own original designs. She said she would never dream of restricting others from copying them.

If they want to make it, let them make it," Witmer said. "They will have to work a while to make it like mine. I got an "A" in art but not in arithmetic and spelling."

A Strasburg company called Almost Amish, owned by Ken and Sally Treadwell, sells products, 98 percent of which are advertised as created by Amish, on the Internet.

"A number of  years ago, an Amish woman created a pattern for the quilt," Ken Treadwell said. "A friend of hers got her to register it, but being Amish, she truly didn't enforce the copyright."

But Almost Amish bought the copyright, and the owners intend to vigorously enforce the design rights.

"We have stopped numerous people from selling and making this quilt," Treadwell said. "We have an attorney that has informed the Mennonite Central Committee that they can't sell it anymore."

Local fire company officials were the latest to get the notice.

"I think it's a bunch of bunk," said West Earl Fire Company mud sale chairman Wesley Martin. "For us, as a fire company depending on donations and things from our personnel who want to help, it's not the most pleasant way to help."

Martin estimates the March 22 mud sale will auction off 75 quilts.

"This copyright thing just seems like they're infringing on us a little bit," he said. "Even though it's not going to affect us that much."

There are at least 18 mud sales in the county each year, from which many local fire companies make money to cover annual expenses.

Will Hutchinson, assistant chief of the Strasburg Fire Company, said the organization received the same letter telling supporters not to sell the Light in the Valley quilt or face the threat of legal action.

"We just didn't know," said Hutchinson of the copyright. "The Almost Amish company, in a way, is protecting people's creative rights."

Hutchinson, whose fire company holds the year's first mud sale Feb. 22, said sale organizers met with representatives from the company to make sure they didn't violate the copyright.

A copyright for the quilt design was registered with the U.S. Copyright office by a Mary C. Beiler on Feb. 10, 1999.  Almost Amish bought the copyright from Beiler several years ago, they said.

"Only a couple people are upset that they have not been able to sell this pattern," Treadwell said. "People seem to understand the point that this is a truly unique design that this woman came up with."

Treadwell said he "seriously doubts" if copyrighting quilt patterns is going to be a problem.

"Unless they come up with a really unique pattern that is not based on any other pattern," he said.

A Light in the Valley quilt is hanging in the King's Cottage bed and breakfast in Lancaster.

Ann Willets, one of the owners, called it "amazing and shocking" that the wall hanging the B&B purchased last year, which it planned to sell, can't be sold because of the copyright.

"I can see from a proprietary standpoint, that if you created this design, then you wouldn't want other people making money off it," Willets said.  "But I'm really surprised, and I may not be able to sell it now. This must be something new in the 21st century, "

Sylvia Petersheim, of Petersheim Quilts, Fabrics and Crafts in Bird-in-Hand, has heard people talking about the Light in the Valley controversy.

"It's just selfish — plain downright selfish," said Petersheim of the copyright.  "I've been here for 30 years. I have had people copy off of my quilts right and left, and I never put a complaint in about that. That's very, very selfish, especially if the quilts are going to mud sales and fundraisers."

Petersheim said the handmade nature of the product should prevent it from being copyrighted.

"We don't have the quilt, but if I found someone to piece it for me, I would make it," she said. "But I don't have to. I can make something else just as beautiful."

"Art is art," Witmer said. "Every piece is different, so how can you copyright that?"

"There's enough room for all of us to do our thing," Witmer said.

Susan Baldrige is an investigative reporter for Lancaster Newspapers. She can be reached at sbaldrige@lnpnews.com or (717) 481-6135. You can also follow @sbaldrige on Twitter.