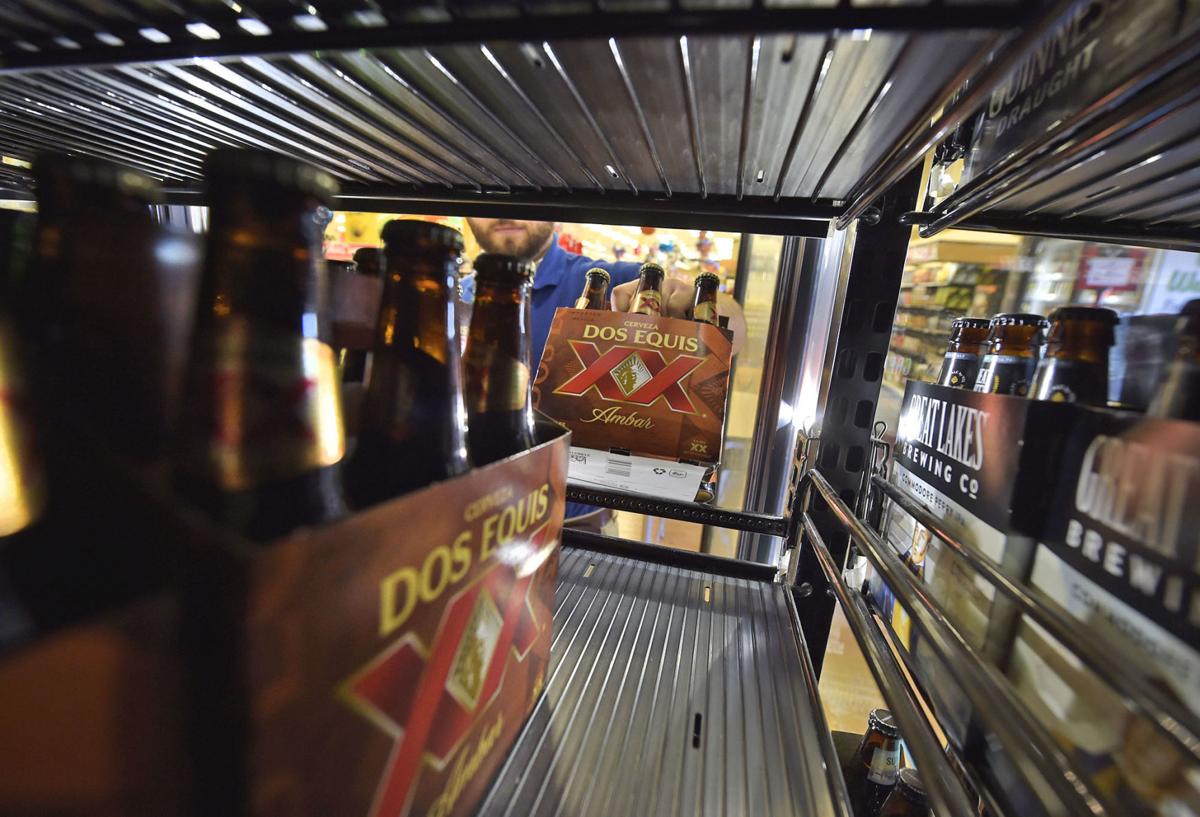 In this file photo, a customer takes a six-pack of beer from the refrigerator at the Weis Market in Lititz, which has been selling beer since 2014. 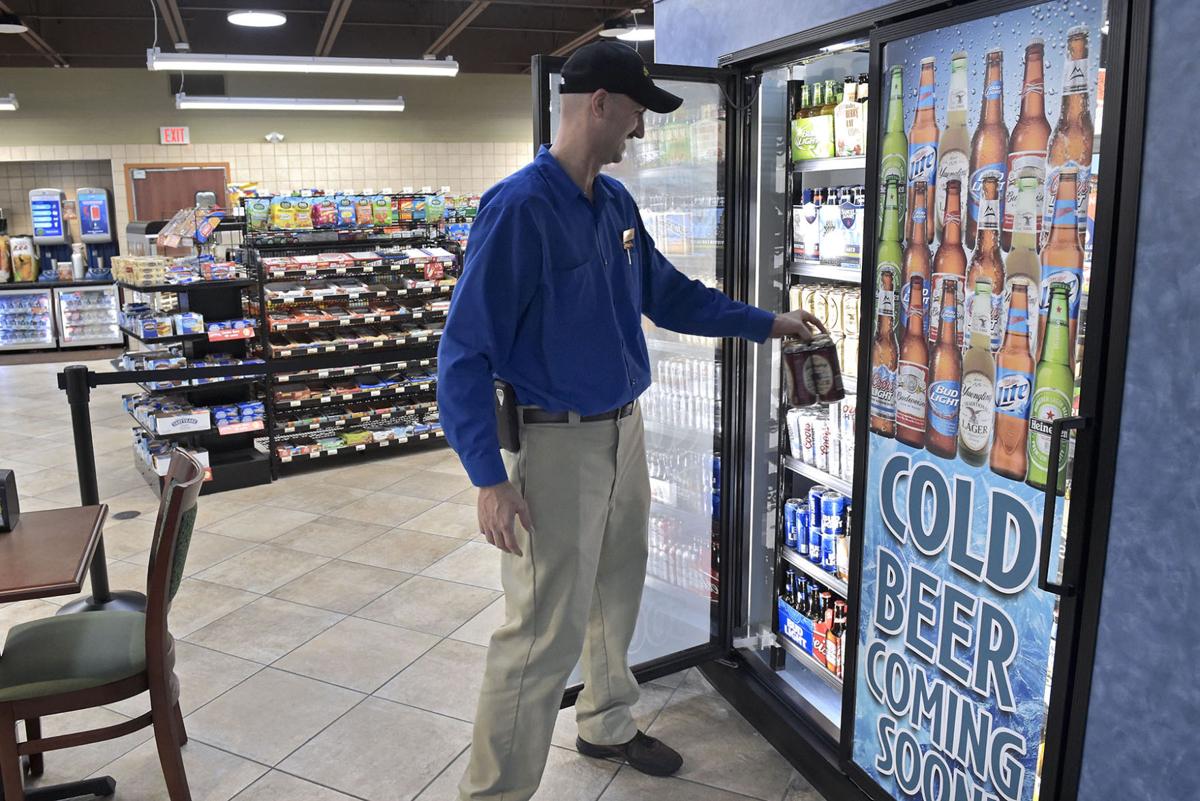 The Rutter's in Leola was the first convenience store in Lancaster County to sell beer. It debuted the sales in October 2016. 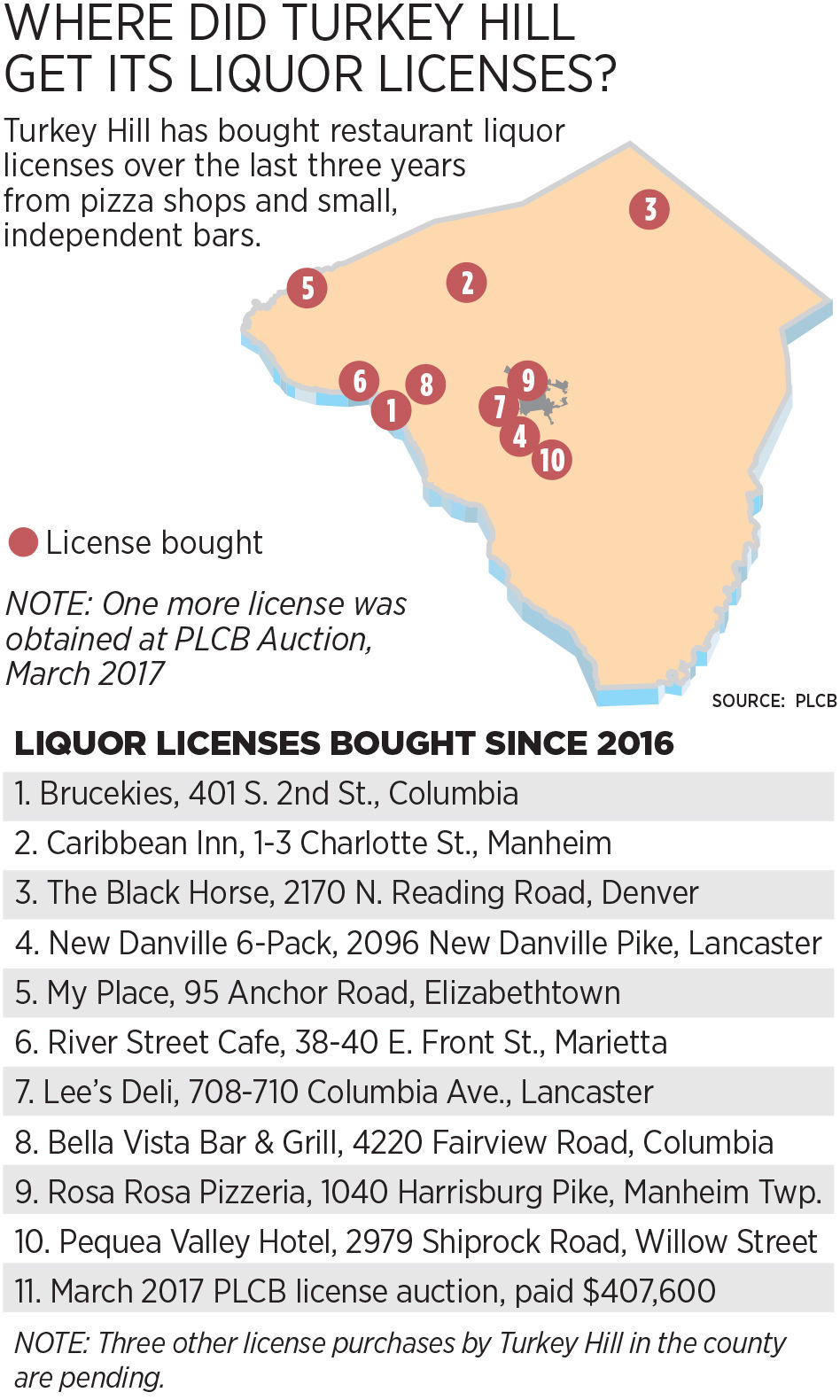 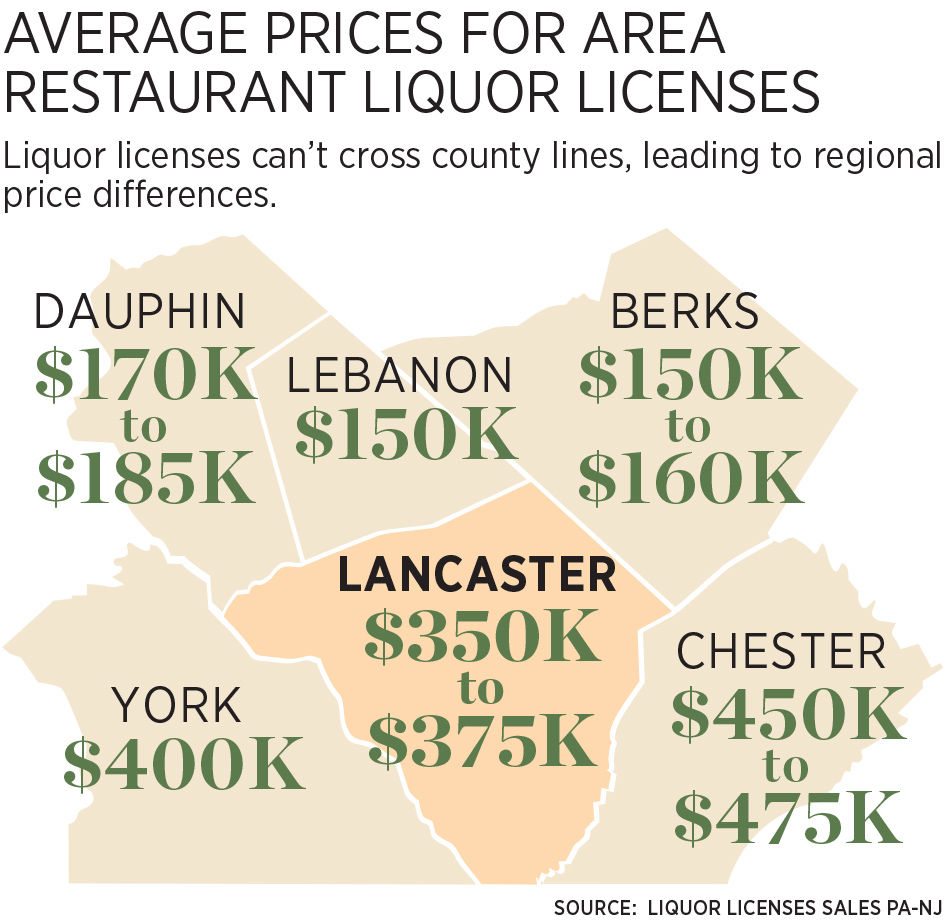 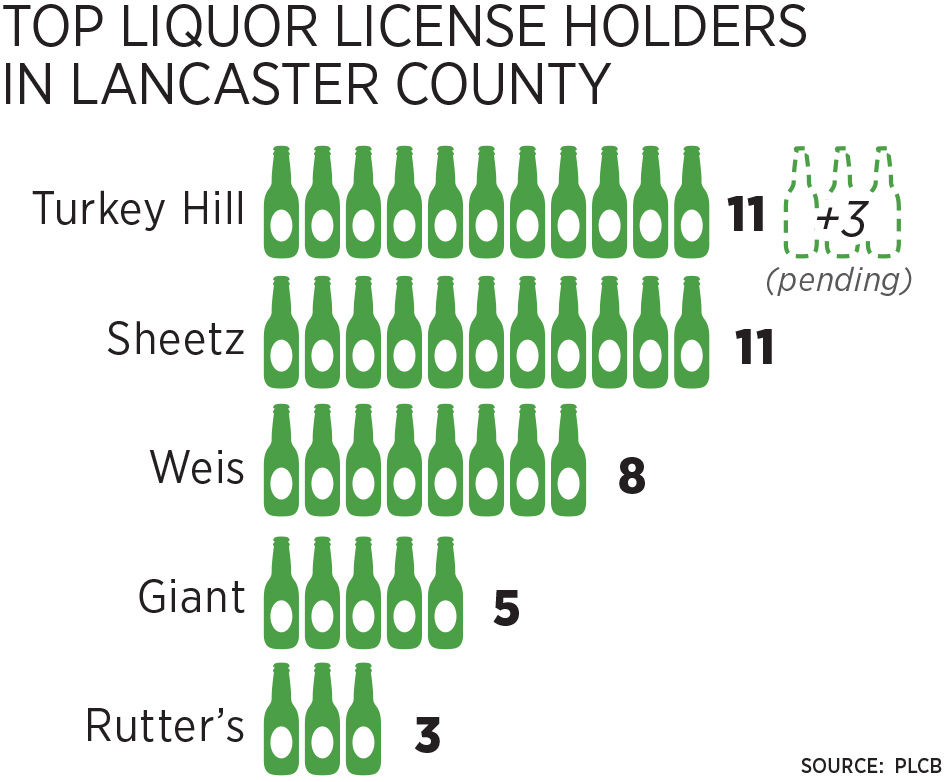 In this file photo, a customer takes a six-pack of beer from the refrigerator at the Weis Market in Lititz, which has been selling beer since 2014.

The Rutter's in Leola was the first convenience store in Lancaster County to sell beer. It debuted the sales in October 2016.

In 2011, after more than 30 years in business, Joe Gargano decided to start selling beer from his small pizza shop at the center of East Petersburg.

Gargano said he paid the going rate for such licenses at the time, which was around $125,000 — an amount that had changed little in decades.

How do liquor licenses work?

Adding beer brought some new faces who would often buy pizza, subs or stromboli and then grab a six-pack on their way out, Gargano said.

But after about five years, Gargano said, his beer sales began to attract a very different kind of customer — buyers who wanted his liquor license.

“I had brokers coming at me, I had people directly calling me,” added Gargano who said the calls, visits and mailings were coming weekly.

5 people to know in East Petersburg

Gargano eventually sold his liquor license in 2017 to the developer of The Crossings at Conestoga Creek opposite Long’s Park. The mixed-use project includes a shopping center anchored by Wegmans.

While Gargano did not disclose the price he got for the private sale, he said he received the going price at the time, which was around $350,000. The license is now used for Miller’s Ale House, which opened in October 2018.

“I made a nice profit because of happenstance. It’s really that simple,” Gargano said.

We secretly dined at Miller's Ale House: Here's a review for our IncognEATo series

But the dramatic run-up in prices for restaurant liquor licenses wasn’t just happenstance.

Rather, it was the result of a package of tweaks made three years ago this month to the Prohibition-era Pennsylvania Liquor Code.

The changes opened up beer and wine sales to a new class of corporate buyers — convenience and grocery store chains.

Since a fixed supply of liquor licenses is available for each county — and new buyers with deep pockets began pursuing them — basic economics explains why prices more than doubled.

No beer or liquor sales? Here's what Lancaster County municipalities are at least partially dry

That pushed prices to the point where many smaller operators, like Gargano, decided to cash out.

At the same time, another set of changes created a possible alternative for small operators who feel shut out by the suddenly high costs of opening a traditional bar.

“I think who’s lost out are the small, independent restaurateurs,” said Aaron Zeamer, an attorney with Russell, Krafft & Gruber who specializes in liquor license transactions. “A chef who has been toiling in the industry for a long time and wants to go out on his own, it’s really, really difficult for them to do that and have a successful model.”

The liquor law changes that went into effect in August 2016 followed years of efforts to privatize liquor sales in Pennsylvania. While the updates that were rolled into Act 39 stopped short of privatization, they represented the biggest update since the 1930s.

Among many other things, Act 39 expanded hours at state-run Fine Wine & Good Spirits stores and allowed them to start selling lottery tickets, while holders of restaurant liquor licenses could sell wine for takeout.

“It was just kind of ‘throw a bunch of stuff in the bill, and see who passes it,’ ” said Melissa Bova, vice president of government affairs for the Pennsylvania Restaurant Association. “We were all trying to figure out what was in it at the end of the day.”

In Lancaster County, Weis opened the first beer cafe at its Lititz store in 2013.

In a tweak that continues to have repercussions for restaurateurs in Lancaster County, the law clarified that convenience stores that sold gas could indeed sell beer if they did it from a separate area.

That change overturned a longtime prohibition on beer and gas being sold at the same place, although Sheetz had been selling beer by arguing that its stores were actually restaurants.

“I think the grocery stores did help spark (price increases) but when convenience stores got the right to own the liquor license — which most people realize is an R (restaurant) license — that basically did jerk the prices higher,” said Rich Hewitt, a broker who handles liquor license sales in New Jersey and Pennsylvania.

The first Lancaster County convenience store to sell booze was the Rutter’s in Leola. It began selling beer in October 2016 with a liquor license it acquired a year earlier for $230,000 from The Pub in New Holland.

While that seemed expensive at the time, prices would soon jump to around $400,000 as Sheetz and Turkey Hill starting buying them.

“I don’t know that anybody foresaw how much it would impact the prices of licenses,” Zeamer said.

With liquor-license offers that sometimes exceed what their businesses are worth, many independent operators cashed out.

“One of their biggest assets was the license, and when they got these big numbers, they sold,” Hewitt said.

Craig Harnish, who owned the Swan Hotel in Strasburg, closed the bar in March 2018 after selling his liquor license — for a price he didn’t disclose — to Weis for its Gap store.

“The bad part of it is, you lose the local bar,” he told LNP when the bar closed.

“I’m not going to lie. I wanted my retirement back. I put my retirement into this place,” Holt said when the bar closed. “It really hurt me to take away the hometown bar. I had so many regular customers.”

One regular at The Den was Michael Nichols, 49, of Elizabethtown, who likened its closing to the “death of a cherished family member.

“The Den was more than a neighborhood bar. It was the gathering place,” said Nichols, a human resources manager who moved to Elizabethtown two years ago from Dallas. In Dallas, such “mom and pop” bars didn’t exist, he said.

Nichols’ partner, David Neels, said his own loyalty to The Den is the reason he won’t buy beer or even stop for gas at the Sheetz in Marietta.

“I just drive by it now,” he said. “There’s a Rutter’s across the street. I usually stop in there.”

While restaurant liquor licenses typically change hands as bars open and close, Zeamer said the influx of corporate owners fundamentally changes the historic churn of licenses, where bars that are closing sell to others that are opening.

“Instead of selling a license, a larger corporate owner will just shift it to another location,” he said. “We’re not going to see those licenses come back to the market, so it (permanently) shrinks that pool of licenses that are available for your local or neighborhood restaurants.”

While Act 39 created a dynamic that has shrunk the number of available restaurant licenses in Lancaster County and driven up their price, it also created a possible workaround for small operators.

Act 39 allows Pennsylvania breweries or distilleries to sell any other Pennsylvania-made beer, wine or liquor alongside their own.

“(Operators) see that as a way to get into the industry and be able to sell alcohol without having to then pay the cost of a restaurant license,” Zeamer said.

Nicholl Thompson did just that in Kinzers with Piccola Italian Bistro.

The restaurant, which opened in January at 3572 Lincoln Highway East, features fresh-made pasta as well as sandwiches and pizza. It also sells Pennsylvania-made beer, wine and liquor because it operates as a retail location for Paradise-based distillery Hillside Spirits.

Thompson said the new arrangement is unique, although she admits it would have been easier with a traditional license. For example, customers still often ask for non-Pennsylvania beers such as Miller Lite, Coors Lite or Bud Light, she said.

Piccola Italian Bistro took a spot formerly occupied by Kinzers Station Tavern, which was owned by Thompson’s parents, Michael and Judie Narducci. The Narduccis sold their liquor license to Primanti Bros. in January 2017.

Another restaurant that sells Pennsylvania beer, wine and liquor without a restaurant liquor license is Shot and Bottle. It opened in May 2018 on the ground floor of the Griest Building in downtown Lancaster.

Andrew Martin, who owns Shot and Bottle with his wife, Kate, said he originally just wanted to have a bottle shop that would sell Pennsylvania-produced liquors, including those made by his Thistle Finch Distillery, which he opened in Lancaster in 2013.

“When the law changed saying we’re allowed to sell beer and wine as well, it made sense that we could open a space that was more restaurant oriented,” he said.

While Martin said he’d liked to be able to stay open past the mandated 11 p.m. closing time, the concept has been successful, even though he can’t count on income from selling major brands.

“All the mass-produced lower-priced products that help a traditional restaurant maintain their margins aren’t available to us,” he said.

Yet Martin, whose Thistle Finch Distillery was the first Lancaster distillery to open since Prohibition, said he doesn’t think a restaurant like his is actually a cheaper way to get into the business.

“At least at the moment, a lot of people see opening a brewery or a distillery as a back door into being able to open their own restaurant or bar,” he said. “But for a lot of us, we’ve invested more money in creating a distillery or a brewery than what a liquor license would have cost.”

Today will be a reasonable summer day.

Restaurant liquor licenses ought to go to actual restaurants, not convenience stores [editorial]

State Rep. Matt Dowling, R-Somerset County, has introduced a bill that could abolish something that nobody really does — drink beer in a conve…

Within the last month, two products have gone so viral that distributors couldn't keep up with the demand.

Work is underway on a new Sheetz in Willow Street slated to open in late November at the former Burkholder’s Quality Cars site near Kendig Square.

Weis Markets has begun renovations for a new beer and wine café at its grocery store in Lancaster Township.

Isaac’s Brewhouse opens Monday in Lancaster, marking the transition of the downtown restaurant from beer seller to beer maker.