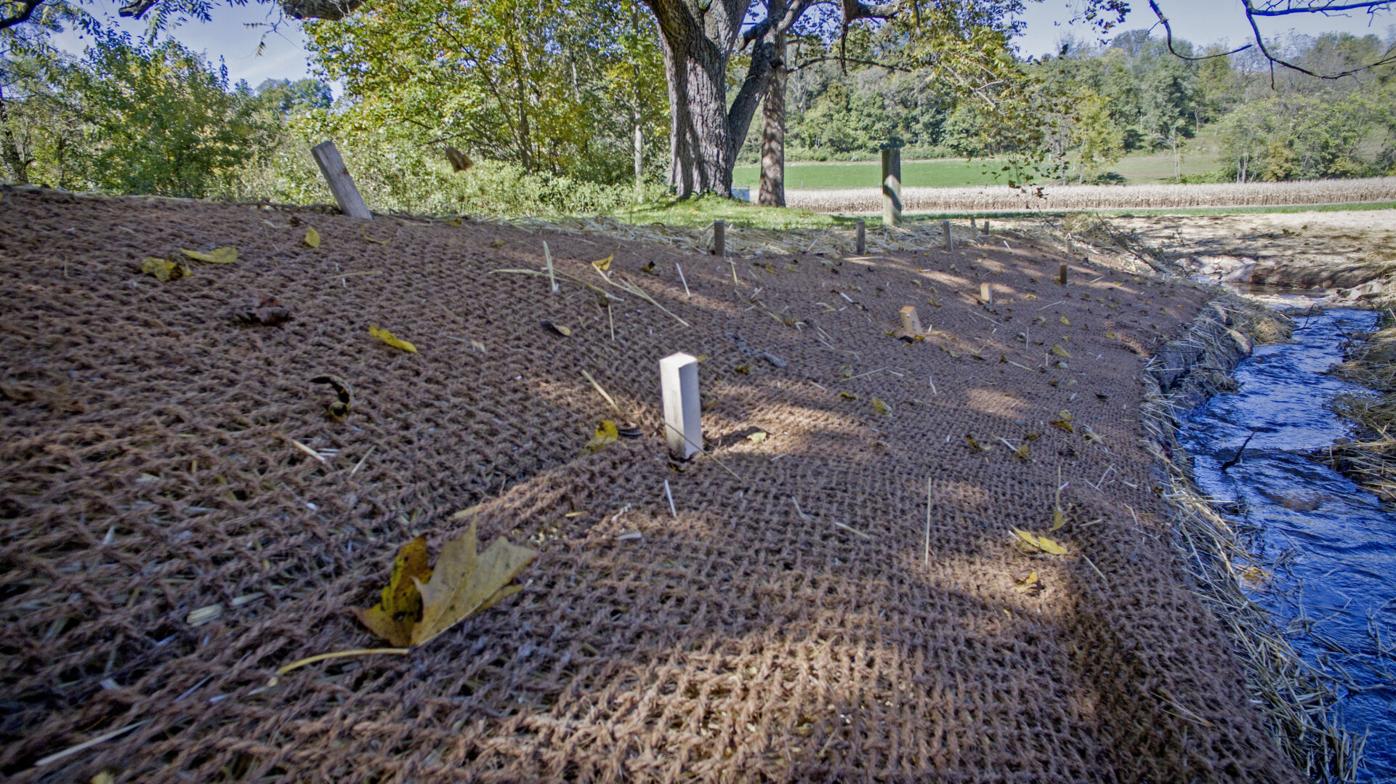 Climbers Run near Marticville Road in Martic Township is undergoing restoration by Donegal Trout Unlimited, which has spent more than $5 million since 1980 on similar Lancaster County projects to improve fish habitat and capture certain types of pollution. 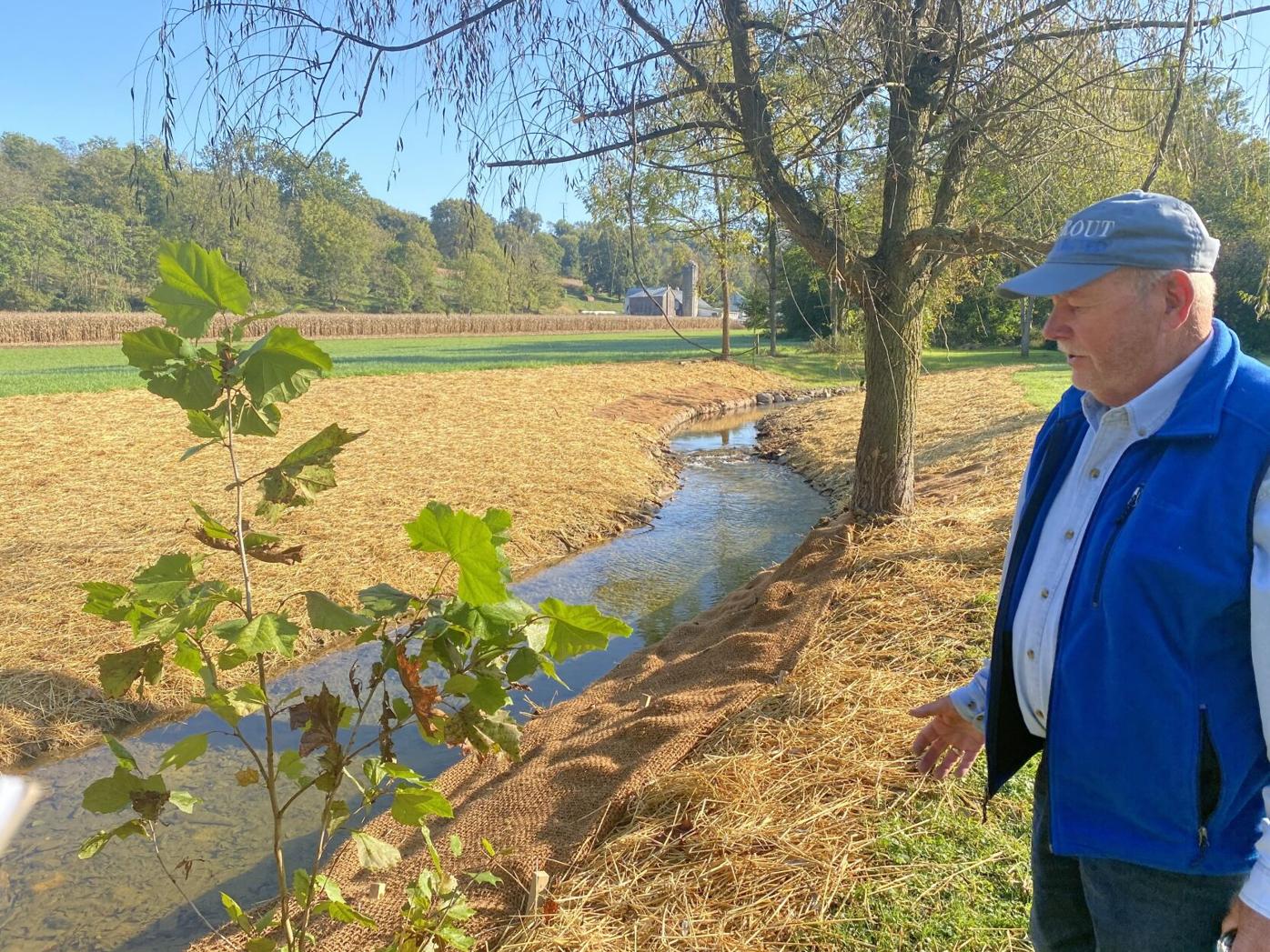 Bob Kutz, a member of Donegal Trout Unlimited, shows off an ongoing stream restoration project at Climbers Run in Martic Township on Tuesday, Oct. 6, 2020. The project is intended to improve trout habitat while reducing sediment and nutrient pollution. 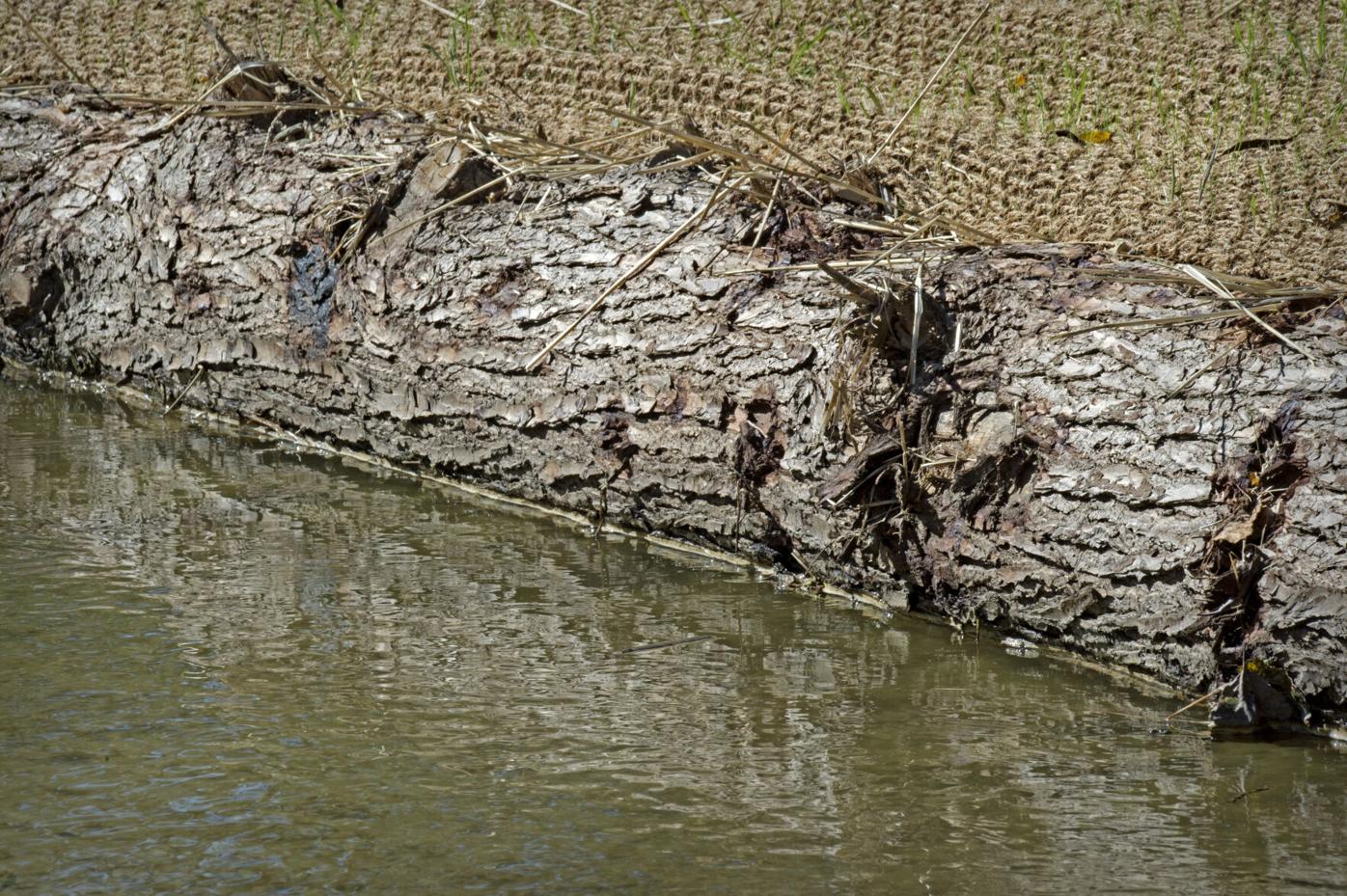 Logs anchored earth along a stretch of Climbers Run near Marticville Road in Martic Township help to stabilize streambanks while also creating fish habitat. They were installed as part of a stream restoration project conducted by members of Donegal Trout Unlimited, which has spent more than $5 million since 1980 on similar projects throughout Lancaster County. 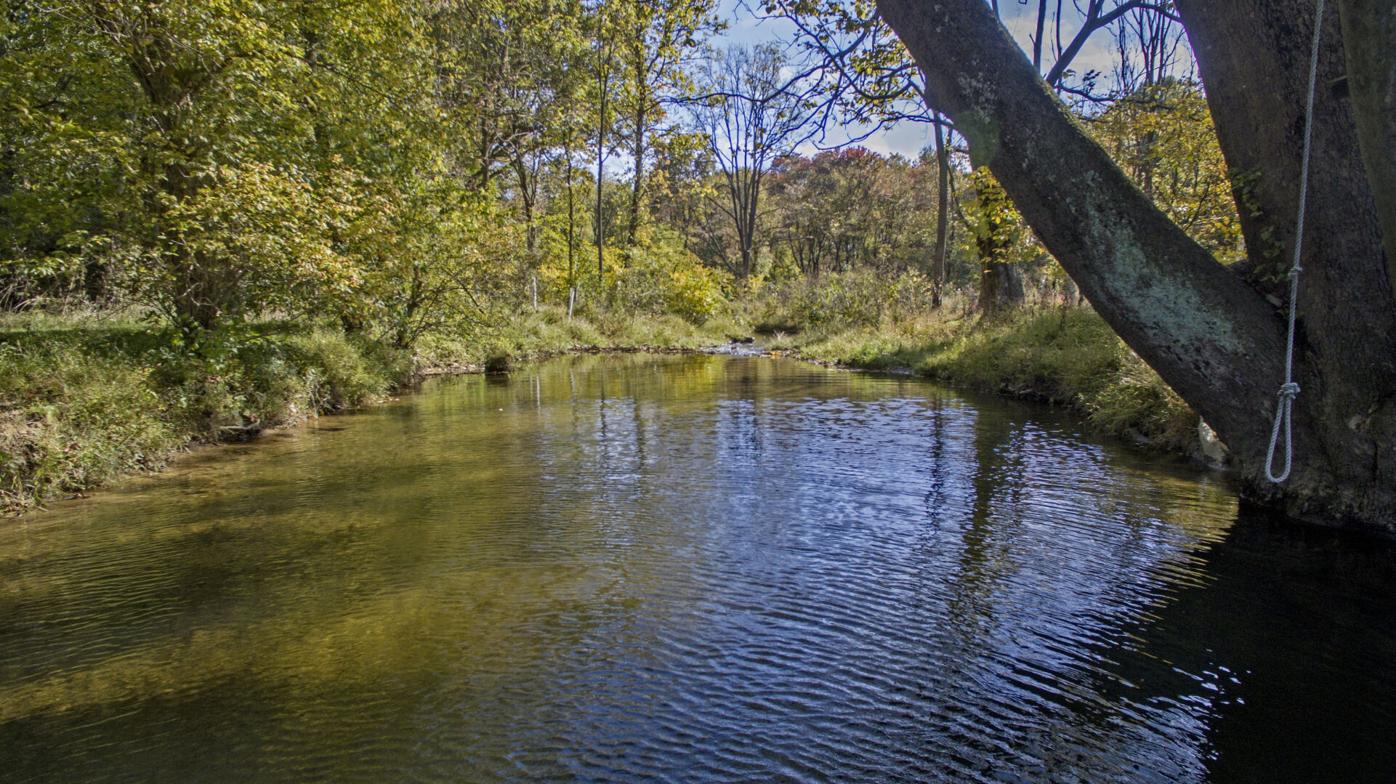 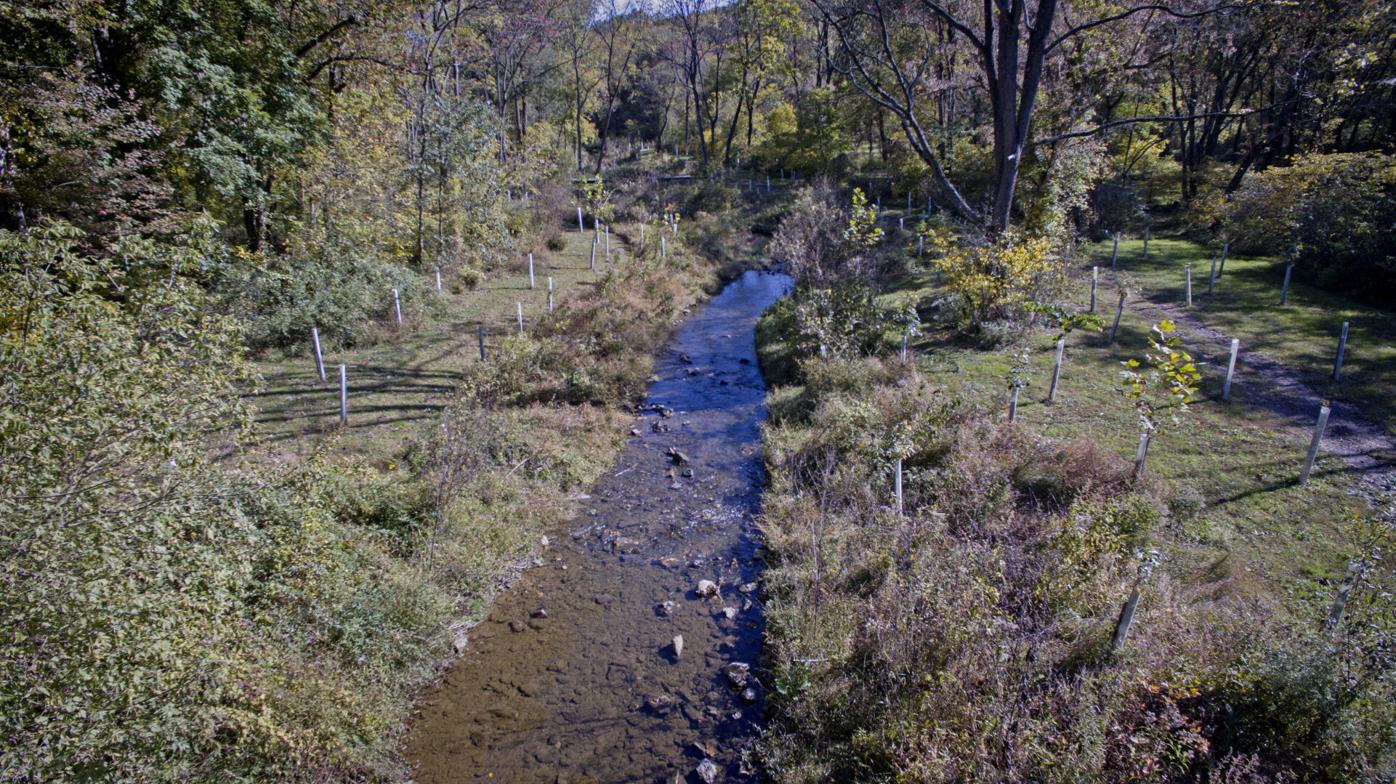 Native vegetation grows along Fishing Creek near Silver Spring Road in Drumore Township as part of a waterway restoration intended to improve fish habitat and reduce certain types of pollution. The project was spearheaded by Donegal Trout Unlimited, which has spent more than $5 million since 1980 on similar projects throughout Lancaster County. 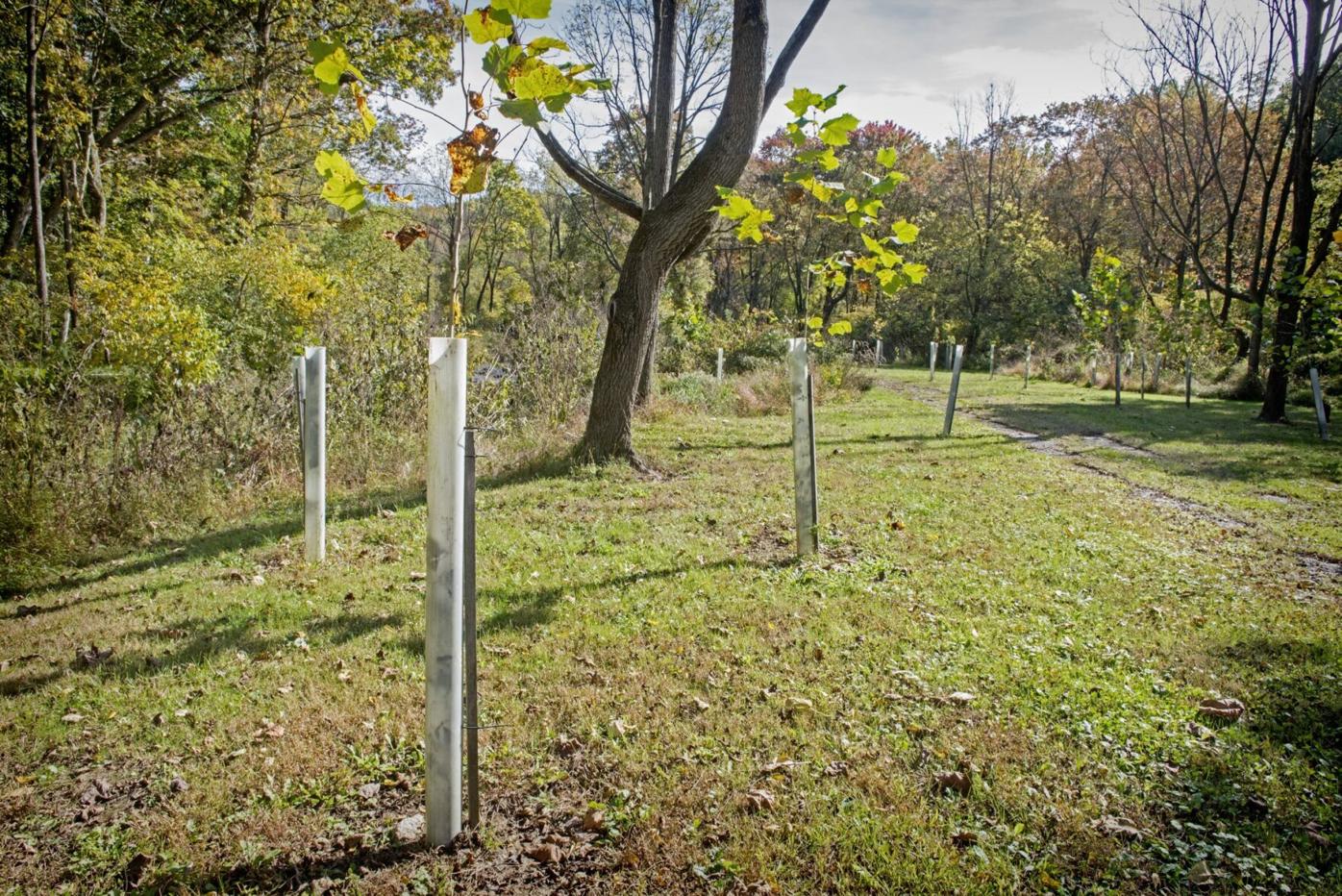 Protective plastic tubes have been placed around young trees along Fishing Creek near Silver Spring Road in Drumore Township as part of a waterway restoration intended to improve fish habitat and reduce certain types of pollution. The project was spearheaded by Donegal Trout Unlimited, which has spent more than $5 million since 1980 on similar projects throughout Lancaster County.

Climbers Run near Marticville Road in Martic Township is undergoing restoration by Donegal Trout Unlimited, which has spent more than $5 million since 1980 on similar Lancaster County projects to improve fish habitat and capture certain types of pollution.

Bob Kutz had to raise his voice, yelling over construction noise as he walked across grassland toward a stretch of Climbers Run and the two contractors working within its banks.

Hoisting a jackhammer overhead, the pair worked to steady the machine as it clanged repeatedly against a long rebar rod, driving it deep to anchor a log to the streambank.

The idea is that the log will divert water to create a shallow pool, improving trout habitat within the Martic Township waterway as part of the latest stream restoration project by Donegal Trout Unlimited, which includes Kutz among its members.

Since 1980, the local group of conservation-minded anglers has spent more than $5 million on 41 projects to improve 16.875 miles of Lancaster County streams, Kutz said.

But he made it clear that their work isn’t carried out simply with fishing in mind. It’s also intended to improve water quality by reducing pollution that county residents — especially farmers — have long been on the hook to clean.

“The purpose of Trout Unlimited is not a fishing club,” Kutz said of the group, founded in 1967. “The purpose is to protect and enhance cold water resources throughout the United States.”

Kutz spoke earlier this month as he and fellow group board member Greg Wilson led a tour of the Climbers Run project that targets about a quarter-mile of stream near Marticville Road.

There, the waterway passes between Amish farmland and the House at Climbers Run, a centuries-old homestead that is now rented to vacationers through Airbnb. Husband and wife Brandon and Amanda Clare have owned the house for about two years.

And last week, they remembered the stream’s severely eroded, vertical banks, which failed to contain water during heavy rainfall.

“We got some crazy flooding,” Brandon Clare said, recalling times when water washed rapidly through the stream, further widening the already eroded banks. “We could lose 2 or 3 feet overnight.”

According to Wilson, erosion on that scale is a telltale sign that a stream is in need of repair. Unfortunately, he said, it’s also a common sight throughout Lancaster County, where about half of its 1,499 total stream miles are considered impaired.

In many cases, it’s a problem that can be traced back to at least the 1700s, when the county’s first settlers began cultivating land, according to Lamonte Garber, a watershed restoration coordinator at the freshwater-centric Stroud Water Research Center in neighboring Chester County.

“They just started cutting down the trees so they could start farming this incredibly rich farmland,” Gaber said, noting the county had, prior to that, been largely forested.

The plants’ removal, he said, is a problem because the healthiest streams flow from heavily forested watersheds, where native trees and shrubs provide multiple benefits.

Without those safeguards, pollution — both sediment and nutrients — are carried downstream by local waterways to the Susquehanna River, which eventually empties into the Chesapeake Bay in Maryland. There, pollutants can create oxygen-poor dead zones, choking out wildlife.

That same history of pollution likely is responsible for the disappearance of wild trout from most local waterways, the Trout Unlimited members said.

Lancaster County, with all of its farmland, is Pennsylvania’s largest contributor of that type of pollution to the bay watershed, according to figures from Lancaster Clean Water Partners. And environmental regulators have ordered that annual pollution loads be reduced drastically by 2025.

That’s what Kutz and Wilson said they've been trying to do since they joined the local Trout Unlimited chapter in the late 1980s.

At first that work was largely informal, Wilson said, describing early projects, which relied on budgets of a few hundred dollars and little expertise.

“We were like weekend warriors,” he said. “Nobody cared what we were doing.”

Budgeting, permitting and meticulous environmental engineering became a new, costly reality, he said, estimating the group can now spend between $400,000 to $700,000 annually on about three projects, which are completed only after the sometimes-trying task of getting landowner approval.

It’s also the reason group members have turned a focus to aggressively pursuing grant dollars and donor funding, Kutz said. He revealed that 95% of their work — a lot of it along Plain sect farms — is funded through grants, which can be competitive to secure.

What has helped is their track record of success, which Kutz said has created numerous opportunities for local partnerships.

“We have a very good reputation of getting things in the ground quickly,” Kutz said. “We are quite proud of that reputation.”

Warwick Township Manager Dan Zimmerman backed that claim, giving credit to the anglers for their ongoing commitment to restore wild trout habitat to Lititz Run, an effort that began decades ago.

“A lot of people push paper, but these guys actually finish projects,” he said.

Much work to be done

Recounting their history, Kutz and Wilson stood on the edge of the Clares’ property watching as a contractor piloted a backhoe near Climbers Run, where the previously severe banks had been mellowed into earthen slopes designed to let the stream expand during heavy rainfall, not overflow.

The banks had already been stabilized against erosion with the rebar-anchored logs and an earthen mesh, and later, a buffer of native shrubs and trees will be planted along the stream’s borders, the pair said.

The project’s price tag is $91,780 — a cost the Clares admitted would be prohibitive if they were left to restore the stream on their own. Amanda Clare was especially excited about the forested buffer.

“They started talking about planting all kinds of trees and wildflowers,” she said, admiring the group’s work. “That’s, of course, a great gift and benefit to the property.”

In addition to stabilizing banks and filtering pollutants, mature plants also provide shade, cooling streams to restore fish-friendly cold-water, according to Garber at Stroud. Later, they’ll shed leaves and wood atop the streams, providing food and habitat for sensitive water-dwelling bugs, which must thrive for a cleanup project to be deemed a true success, he said.

Proud of their work, Kutz and Wilson also wanted to show off a finished project, taking a short drive over to Drumore Township and a stretch of Fishing Creek near Camp Andrews, where Kutz pointed toward the water and a swimming trout.

Walking along the stream, Wilson reached out to touch the planted wildflowers, drawing attention to flying bees, and Kutz called out the names of young, native trees planted in protective tubes.

“It’s hard to imagine what this looked like,” Kutz said, remembering the poor, eroded stream that preceded their work.

And still, there is much work to be done, Wilson said. In fact, an engineering study found more than 120 problem sites in just a single Lancaster County watershed — Conowingo Creek.

The older men were blunt in admitting that they won’t be around to see all of those sites restored — it’ll likely take at least 60 more years, they said.

They also admitted they wonder who among their group will further the work. Though Donegal Trout Unlimited boasts about 850 members, only a small percentage are active in conservation projects, they said, looking for young people to step up.

“We are a little worried about who’s going to carry the torch,” Wilson said.

Lancaster city plans for $10 million worth of drinking water upgrades

Leading the way down a grassy lane on an October morning, Tim Eck paused regularly to look skyward and examine the treetops bordering a narrow…

Ed Mitchell had just pulled out of a gravel lot a little before 10 a.m. Saturday in rural Penn Township when he abruptly brought his pickup to…

Carrying a long, narrow shovel, Steve Groff walked into a field on his Holtwood farm, pausing when he reached the right spot to thrust the too…

Worried about mounting conservation mandates and their prohibitive costs, local stakeholders continue to raise concerns about the development …

Part of a Manheim Borough park that’s been closed to the public due to unsafe conditions could soon be the site of a new walking trail.

Tiny pieces of plastic are polluting some of Lancaster County’s most well-known waterways, where local researchers fear they could pose threat…