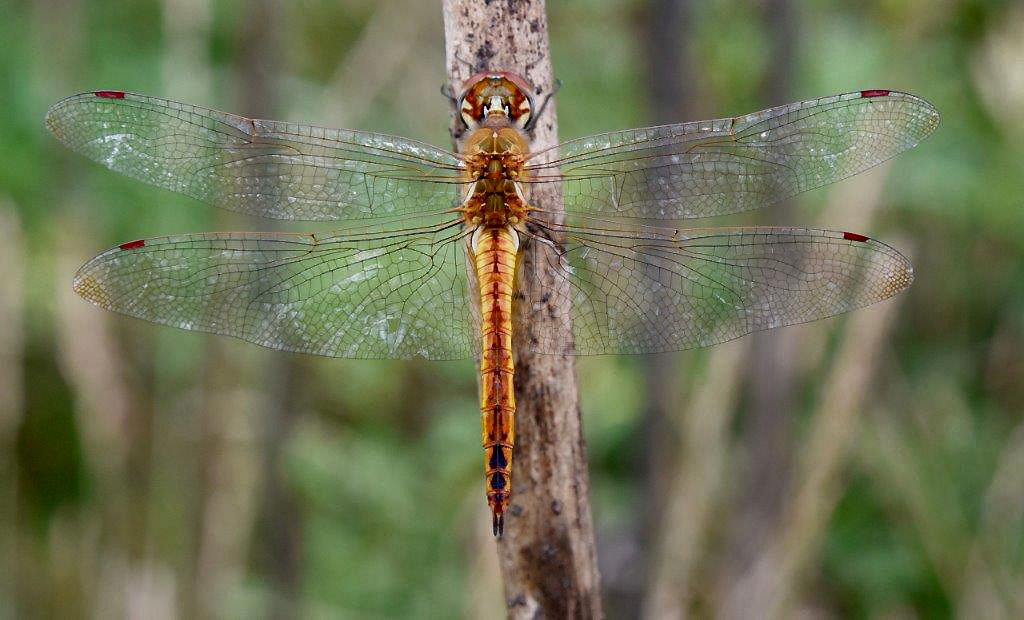 A wandering glider dragonfly takes a brief break between zipping after insect prey in a field in Lancaster Township in the Bridgeport area. 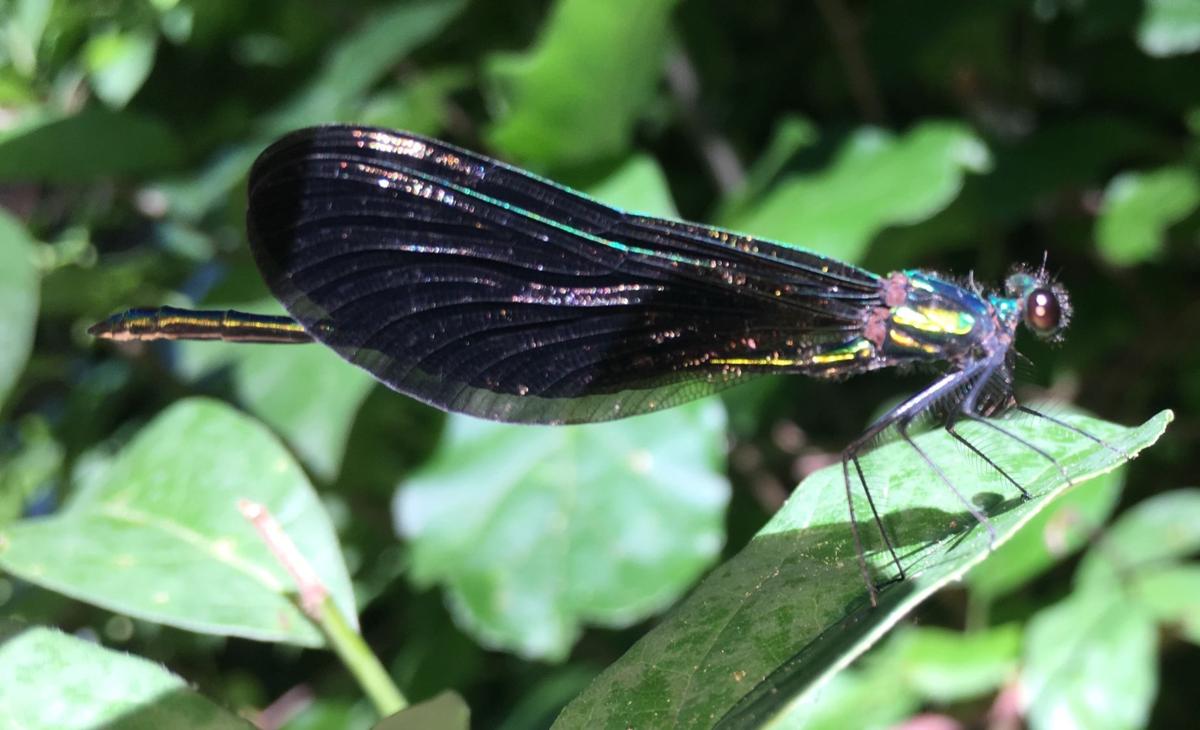 An ebony jewelwing damselfly resting in a suburban yard in Lancaster Township.

Normally seen on languid days on rivers and ponds, dragonflies and their lesser-known cousins are being spotted in great numbers all around the county, from backyards to parking lots.

Fred Habegger, president of the Lancaster Butterfly and Entomological Club, was grilling at his home in Akron recently when he looked up.

“They were all over my backyard hovering — I’ve not seen them in those kinds of numbers in my backyard. I was amazed,” Habegger recalled.

Some local residents are spotting dragonflies on roads, and the insects are seemingly attracted to their vehicles.

There’s a reason for that, said Mike Slater. Females think the shine on asphalt and metallic cars is standing water and are trying to lay eggs, explained Slater, who lives near Adamstown and is the immediate past president of the Pennsylvania Entomological Society.

“It’s not good for the paint,” he added.

“I’ve noticed damselflies on my porch for the first time ever this year in northwestern Lancaster city,” Melissa Brosey said on Facebook.

City resident Mary Haverstick added that she was “at Franklin & Marshall and saw a lot at the old football field — an odd location for them, I thought.”

“When using our pool they are constantly flying around trying to find bugs,” said Barb Heister, a West Lampeter Township resident.

Why so many dragonflies all of a sudden?

There’s standing water everywhere for dragonflies to lay eggs — not just the streams, ponds and rivers that are usually all that’s left in a hot summer.

It’s been well-established that the second-wettest summer so far on record here has spawned a plethora of mosquitoes and its attendant danger of West Nile Virus.

Fortunately, dragonflies and damselflies are the best antidote.

The fleet-winged bugs’ daily diet of the bloodsuckers has been estimated at 30 to in the hundreds.

No wonder their nickname is “mosquito hawk.” They fold their wings into baskets to nab several bugs at a time and munch down with serrated mandibles that they lower instantly out of their mouths.

Yet they are harmless to humans and, contrary to one enduring myth that has scared more than one generation of youngsters, can’t stitch your mouth shut.

A summer icon, dragonflies and damselflies are among the most prehistoric insects on Earth and have been in existence for 280-380 million years.

Yet they are considered the most beautiful in the insect world, with shiny metallic bodies of various hues and usually clear wings.

There are about 5,000 species of dragonflies and damselflies, found all over the Earth. Some species in the United States migrate.

Dragonflies are generally larger, while only damselflies can fold their wings over their bodies.

Those double sets of wings that can move in different directions at the same time make them acrobatic fliers.

They can also fly straight up and down and even mate while in flight.

So far, 2018 has been the second wettest year on record in Lancaster County, according to Millersville University, which began logging weather data in 1914.

In August alone, MU’s weather center recorded 5.87 inches of rain through Monday, or more than twice the normal amount, which is 2.6 inches.

Official precipitation was about average into early May before repeated rainy cycles settled in. The wet summer has pushed the yearly total to 38.47 inches — or 11.53 inches above normal — as of Monday.

And those are just the totals recorded at Millersville. Some areas of the county, especially the northwest, have had heavier rainfall.