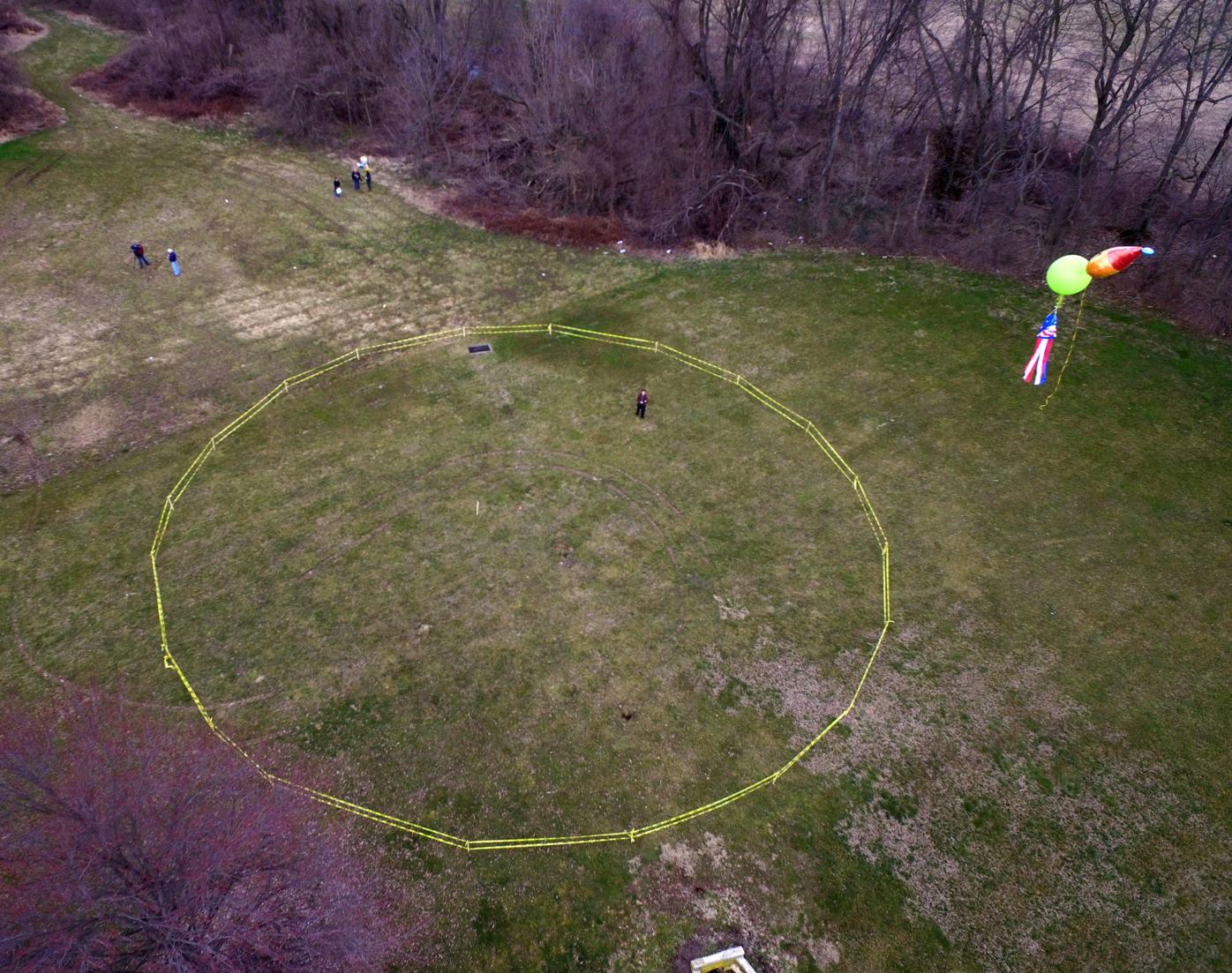 Opponents to the proposed water tower at Lancaster Community Park of Millersville Pike in Lancaster Township made a circle in the grass to show the size of the tower Monday, Mar. 18, 2019. 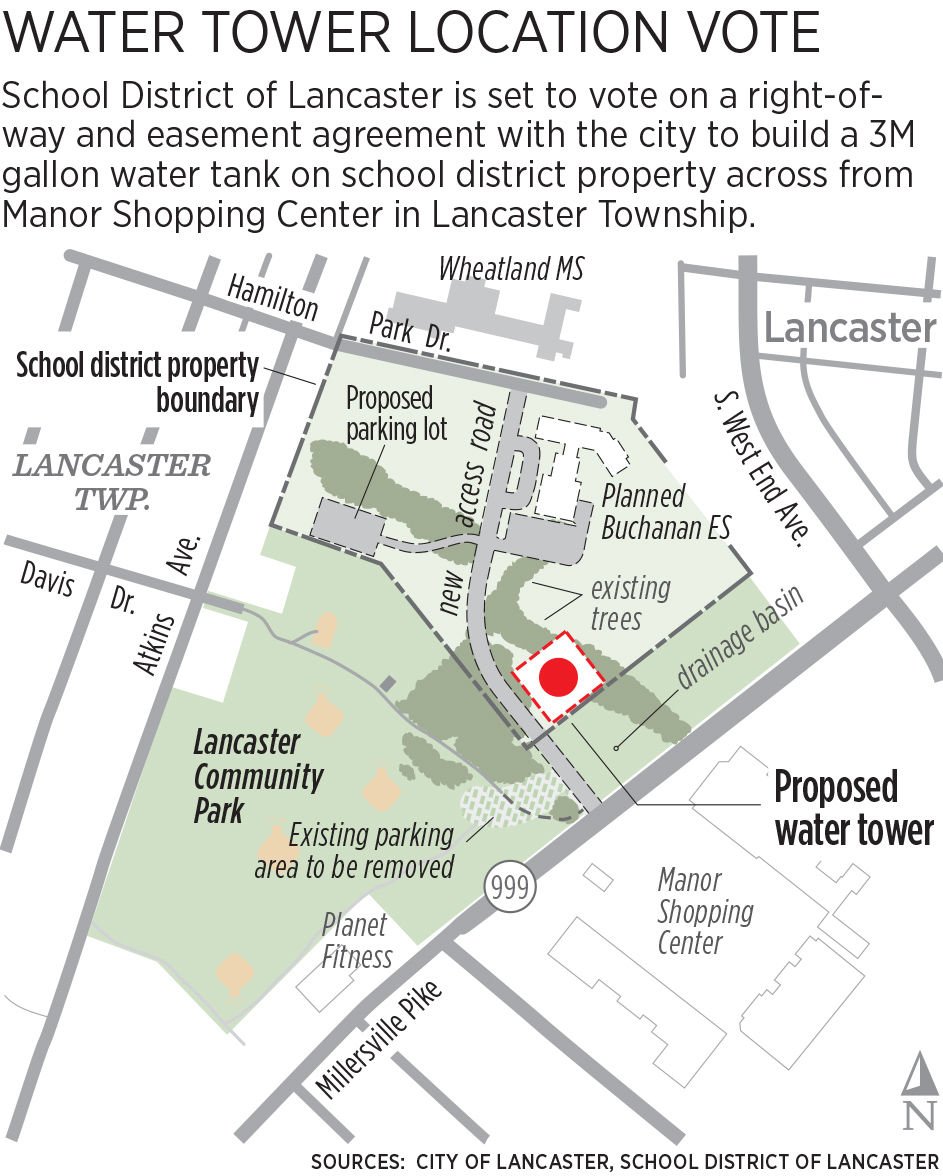 Opponents to the proposed water tower at Lancaster Community Park of Millersville Pike in Lancaster Township made a circle in the grass to show the size of the tower Monday, Mar. 18, 2019.

At long last, the city of Lancaster says it has a detailed cost analysis of its water tower site selection and is prepared to share it with Lancaster Township.

The township has been seeking it for more than two years. It’s been frustrating, Laudien said, and he remains wary.

The analysis covers five sites: The city’s chosen site, which is on school district property near Lancaster Community Park; and four alternatives.

King promised the analysis to the township 10 weeks ago, in an email dated April 26. At the time, she said it would take 6 to 8 weeks.

Things took longer than she realized they would, she said. The first draft had to be sent back to the engineer for additional work, and vacations and last week’s holiday delayed things further, she said.

Laudien said he doesn’t know why it took so long. Given what the township was requesting, a couple of weeks should have been plenty of time, he said.

In the interim, the township received two alerts last week from the state’s “One Call” system, notifying it that ARRO, a firm working for the city, will be digging for water lines and a water tank in the area of the school district site.

That makes the city’s purported need for extra time look like a “ruse,” Laudien said.

King declined to say if the One Call notifications mean the city has ruled out the alternative tower sites.

But the city is dealing in good faith with the township, she averred, going “above and beyond” at its own expense to allay its neighbor’s concerns.

The city says the tower is needed to improve water pressure in the west portion of its water system, and that the school district property is the best and most cost-effective location.

While that may be true, the city’s say-so isn’t enough, Laudien and township Supervisor Steve Elliott say. It has an obligation to substantiate its case with data, and so far it hasn’t done so, they said.

“If the city can show us why the tower is needed and why it has to go there, then we can accept our part,” Elliott said in an interview earlier this year.

The city previously promised the township a full cost comparison in April 2018.

That led to a meeting with Laudien and Elliott that summer. It was short, because it turned out the city hadn’t included costs for piping at the school district site — a $480,000 error, the city subsequently admitted.

Even so, the school district site remained the best choice, according to then-Public Works Director Charlotte Katzenmoyer.

“The next closest site is still roughly $1 million more,” she told LNP at the time.

The project has continued to move forward. In March, the school board reluctantly approved a 99-year easement for the tower, for which the city will pay $2 million over 20 years.

Mayor Danene Sorace had warned the city might resort to eminent domain otherwise, which the school board feared would rob the district of any influence over the tower’s appearance, placement and other factors.

In April, the budget line item for the tank was increased from $7 million to $9.5 million, a figure that includes about $800,000 for construction management and the same amount in case of unexpected contingencies. A related water line will cost an estimated $1.5 million.

The four alternatives to the city’s choice are known as the Armstrong, Charles Road, Kensington and Wabank Road sites.

Strong cases can be made for the first two in particular, Laudien said. Based on Charles Road site’s property assessment, the city could buy it for significantly less than the $2 million SDL lease, he said, while the cost to build there would be almost exactly the same.

The Armstrong site, meanwhile, is in line for development, but that can’t proceed without a water supply. Everyone involved would be highly motivated to work with the city, he said.

He said he’s baffled by what he sees as the city’s dogged insistence on the school district site, and by the approach it’s taking.

“I’m confused by the process,” he said. “None of it makes sense to me.”

City Council approves one alteration, denies another at historic houses

City Council attempted to leaven historic preservation standards with some flexibility on Tuesday.

Five years after it picked a site in Lancaster Township near Buchanan Elementary School for a controversial water tower, the city of Lancaster…