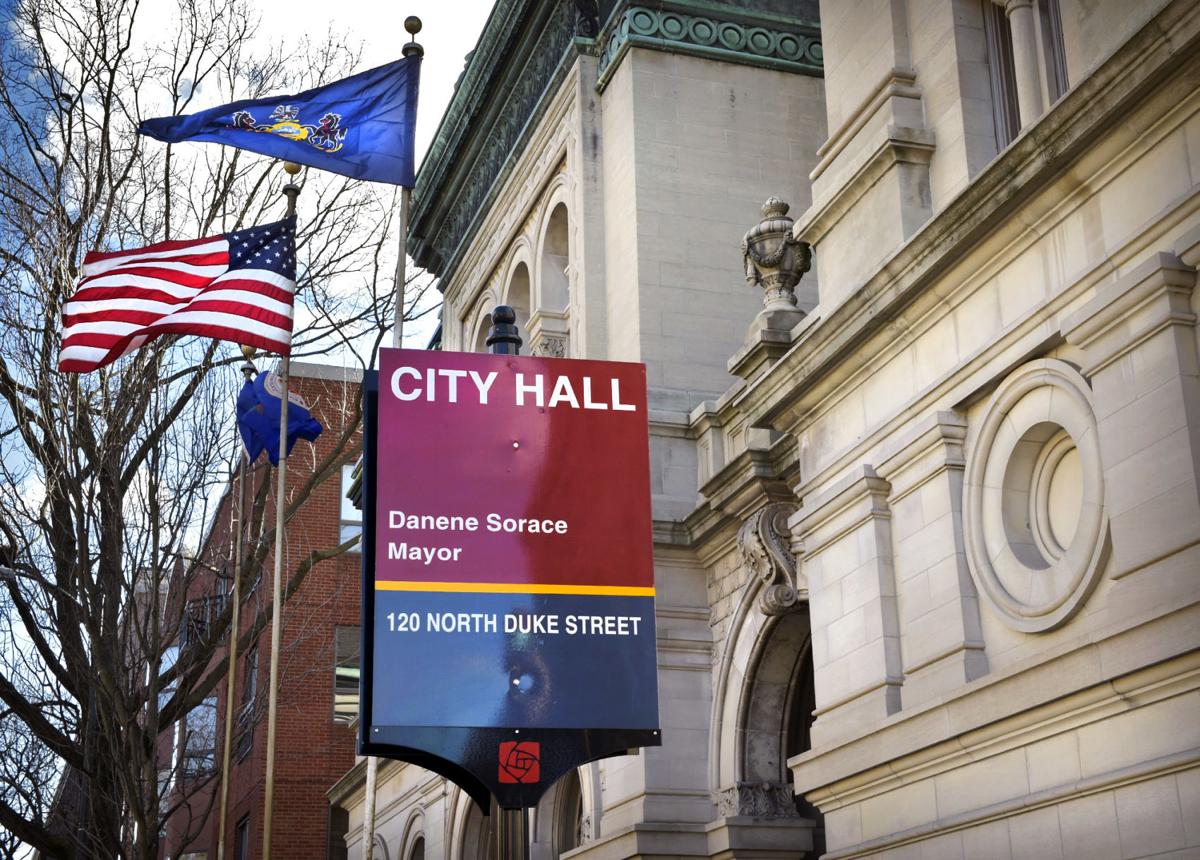 An email from Mayor Danene Sorace's former chief of staff, Matt Johnson (left) and a receipt for $429.39 of yoga gear (right).

The signature dish of Na'Brasa, a four-star Brazilian steakhouse in Horsham, is described on the menu as "15 cuts of meat and salmon, all of which are brought to the table and carved table side."

When a single employee retired in 2019, taxpayers put up nearly $600 for a retirement party at Decades, a downtown bar and arcade.

Over the past two years, city officials have spent thousands of dollars on expensive meals, catered lunches and other expenses, a review of 2018-2019 city credit card and reimbursement records show.

The expenses come as the city facing multimillion-dollar budget gaps and as Mayor Danene Sorace is calling on state officials to grant the city increased taxing authority. Her first city budget in 2018 increased taxes on residents by about $100, and in 2019, utility rates went up an average of about $205 per resident per year.

That’s less than it cost two city employees to dine on steak and lobster over the course of two meals when they visited McCormick & Schmick's in Minneapolis on a business trip. The meals totaled $215.74.

"Yeah, the steak and lobster jumped out to me as well," city business administrator Patrick Hopkins said when asked about these and other expenses.

Facing millions in revenue loss due to COVID-19, Lancaster city furloughs 12% of staff

Although most of the city's travel costs are under budget, employees routinely violated the allowable amount for travel meal reimbursements pursuant to the city's policy.

Records also showed other non-travel related spending, like retirement parties, yoga equipment for city staff and nearly $800 for food for a pre-city council reception for groups with items on the agenda.

In total, LNP | LancasterOnline identified $4064.77 worth of these types of expenses.

Her credit card was also used in fall 2018 to purchase $429.39 worth of yoga equipment so that a “good friend” of the mayor's former chief of staff, Matt Johnson, conduct 36 hours of yoga programming to receive a certification, Johnson said in an email at the time and Sorace reiterated in her response to questions about the expenditures.

Sorace said the equipment was not purchased with taxpayer dollars; rather, it was purchased with funds from an employee- and Capital Blue Cross-sustained account. But the purchase was made on her city-issued credit card, and when asked to provide documents showing how part of that month's bill was paid from a separate account, Sorace did not provide records.

Lancaster is not alone

In a seven-page statement, Sorace admitted that there were instances where policies weren't “strictly followed” but stressed that these expenses were not the source of the city's financial woes.

Sorace said Lancaster’s issues are driven by outdated revenue-raising tools, which are compounded by a having a large amount of tax-exempt properties. She and other municipal leaders have been pushing for legislative changes to the state’s Local Tax Enabling Act, Act 511, to address these problems.

"While every taxpayer dollar is important, these types of expenses are not what has caused the City's financial challenges and eliminating these expenses completely will have no material impact on the City's fiscal condition," she said.

"Contextually, the specific itemized expenses cited in LNP's questions amount to less than $5,000 over a two-year period," she said. "This is not a trivial amount, but when compared to the City's overall operating expenses of more than $200,000,000 during the period of LNP's review these expenses amount to about 25 one-thousandths of a percent (.0025%)."

Cities facing financial hardship often enter Act 47, or financially distressed status, which gives them more latitude in how they can collect revenue in partnership with the state Department of Community and Economic Development. Proponents of changing Act 511, including Sorace, are calling for more flexibility in revenue generation and taxing structure without having to enter Act 47.

Nanticoke, a Luzerne County city in the same class as Lancaster but with a much smaller population, entered Act 47 in 2009 and exited in 2016. Jennifer Polito, accounting and finance director, said spending like has been going on in Lancaster does not occur in Nanticoke.

“If you overspend or spend on alcohol, you don’t get reimbursed,” she said. “We go through the receipts to make sure meals aren’t over $100, there’s no alcohol or entertainment.”

Polito also said the city does not go to restaurants and bill taxpayers for work/lunch meetings, as was common in Lancaster's records, and that they opt for local or webinar training rather than overnight and out of state events.

Bill Lazor, a CPA at Kingston-based Kronick Kalada Berdy and Co. and Chairman of the Lackawanna County Tax Collection Committee, agreed with Sorace that act 551, and not the travel and other expenses, was the source of the problem.

“But the answer is not to continue to raise taxes on the citizenry,” he said. “It’s a combination of appropriate taxes and appropriate expenditure.”

And expenses like those outlined in LNP | LancasterOnlines questions to the city is “a very good starting point for questions to be raised with respect to elected officials or people who are approving these types of expenditures.”

Gordon Mann, director of the Philadelphia-based financial firm PFM, which is currently assisting Reading get out of Act 47 and has been contracted to do a financial assessment for Lancaster, said when a city enters financial hardship, travel, training and other discretionary spending is often first to get cut.

That’s not a recommendation his firm plans to make in its final report to Lancaster city later this summer, he said, not because it is not important to watch these expenditures, but because he is focused on whether they meet or exceed their allocations for those categories, and what areas could the city focus its effort to save the most money.

“You want to make sure you are responsible about resources, but you also want allocate you resources properly so you don’t have people wasting time there where you could be looking for saving elsewhere,” he said. “Don’t trip over a nickel looking for a quarter.”

Richard Gray, Sorace’s Democratic predecessor, declined to comment on the majority of expenses, but said his leadership team did not go to restaurants to meet. However, he did defend the retirement party expense, an event held for Randy Patterson, the city’s former director of community planning, which Gray attended.

"How many millions of dollars has the city gotten because of him," Gray asked. "It's in the tens of millions, so that doesn't seem extra to me."

Charlie Smithgall, a Lancaster city Republican mayor from 1998 to 2006, said when he was mayor, expenses like steak and lobster meals, sushi restaurant catering for city meetings, or nearly $600 retirement parties would not have occurred.

Schools are setting their reopening plans. Parents, what questions do you have? [survey]

- The Lancaster Office of Promotion spent $14.31 for a caramel apple from Bakehouse on King, which city business administrator Patrick Hopkins said was for a photo shoot for social media promotion of Lancaster city tourism during September 2019 restaurant week. No such photo appears on any social media. When LNP | LancasterOnline noted the discrepancy between his statement and the lack of photo, Hopkins did not respond.

- In July 2019, the city split the cost of a retirement party for Randy Patterson, former director of economic development and neighborhood revitalization, with taxpayers putting up $577.86 and the Economic Development Corporation and Lancaster City Alliance each putting up $500. City employees and local business professionals attended the party at Decades, a downtown restaurant and arcade. Attendees were given appetizers to share and $5 in tokens for games. Lancaster Mayor Danene Sorace said it was "an expense that Randy's legacy of work for the City will return to the City of Lancaster hundreds or thousands of times over."

- In at least two instances in 2018, city employees were reimbursed for mileage on their personal vehicles as well as gas for work trips, costing taxpayers an extra $156.31. Sorace said staff has now been reminded that mileage reimbursement includes the cost of gas, but did not say whether the employees were asked to pay back the overages.

How and why we reported this story

In December, LNP|LancasterOnline used the state’s Right to Know Law to request all expense reports for Lancaster city elected officials, certain department heads and any employee who submitted an expense report seeking $250 or more in reimbursement for 2018-2019. LNP also requested all city credit card statements for the same time period.

The newspaper submitted additional public requests for expense information in February. The city extended its deadline to respond to the requests until late March. As the COVID-19 pandemic began, the newspaper agreed to several additional extensions to accommodate unprecedented demands on city officials.

The records requests are part of LNP|LancasterOnline’s ongoing efforts to provide taxpayers with an understanding of how government money is spent. LNP and The Caucus, a watchdog publication of LNP Media Group, Inc., have examined spending practices of state agencies and elected office holders, both Democratic and Republican.

Lebanon County sued Gov. Tom Wolf on Wednesday over his decision to withhold nearly $13 million in federal coronavirus funding from the county…

A Virginia man is suing Lancaster city, its police chief and a city police officer in federal court, accusing the officer of stopping him for …