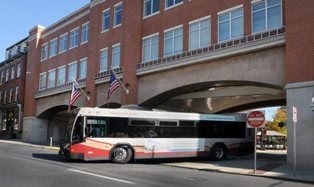 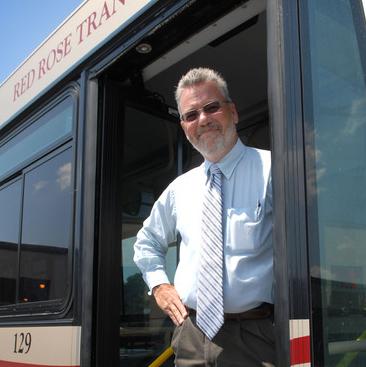 David Kilmer, executive director of the Red Rose Transit Authority, at the depot on Erick Road.

David Kilmer, executive director of the Red Rose Transit Authority, at the depot on Erick Road.

But the combined South Central Transit Authority will be indistinguishable from the present RRTA and BARTA.

The single authority will operate RRTA and BARTA buses in their respective counties. The names on the buses will not change, nor will their colors.

Despite the connection of the two systems, Kilmer has said he doesn’t foresee connecting the routes of the two bus systems unless there is a demonstrable need.

“It doesn’t effect the service on the street in either community, and that’s the important thing,” Kilmer said of the merger.

The changes — and the savings — will occur behind the scenes. The combined authority will combine administrative, financial, purchasing and other functions.

Kilmer is predicting “economies of scale” with having the third largest transit agency in the state by budget, and fourth largest by passengers and miles covered.

That would eliminate the need for the current contributions from the Lancaster and Berks county governments. He hopes to see that level of savings for at least the first five years.

Under a timetable presented to RRTA board members Wednesday, the merger would be completed by the end of this year. The first meeting of the new authority board is tentatively scheduled for Jan. 28.

On Wednesday, RRTA board members took the first formal action toward the merger. The board unanimously approved a resolution calling on the Lancaster County Commissioners to create a new authority.

A similar resolution is expected to go before the Berks Area Regional Transit Authority board on Sept. 29.

“It’s a momentous step, but it’s not a final step,” RRTA board Chairman Jeff Wibberly remarked.

“No, this is the first of many,” Kilmer responded.

Both transit boards at voted in late July to move ahead with the merger.

Both boards of county commissioners will need to hold public hearings after 30 days to form the new authority.

The merger also requires the approval of the state Transportation Department and the Federal Transit Administration.

The governor will also need to sign off on the new authority to allow it to receive federal funding.

Kilmer said the name South Central Transit Authority is being recommended by a merger study committee. Keystone Transit was also considered, but there are many other entities named Keystone.

He said it was important not to include the name of either county. The committee wanted to be careful not to indicate that one was taking over the other.

Talks about a merger of the two transit agencies began almost a year ago. In October, Kilmer was named to a dual role of acting executive director of BARTA and RRTA took over administrative functions of the Reading-based authority under contract with the BARTA board.

That followed the death of the Berks transit authority’s long-time executive director.

The merger talks also come as state transportation officials are considering the effects of consolidating smaller agencies into regional authorities.

Mark Glatz, of Easton Coach, commented Wednesday that his company “applauds and endorses the merger.”

Glatz said Easton has already merged the maintenance of the two van fleets at its East Petersburg facility.

• Rank of the combined authority by budget among the state’s 22 transit agencies: 3.

• Rank based on passengers: 4

• Anticipated date of the final action needed for the merger: Dec. 29.

• Anticipated first meeting of the new authority board: Jan. 28.