A written statement said Jan L. Bergen, who has been president and CEO of the local system since September 2015 — just a month after it joined Philadelphia-based Penn Medicine — announced plans today to retire in January 2021.

Bergen, who is the local system's first female president and CEO, said in a letter that she reached the decision to retire "after months of discussion and reflection with my family and our Board of Trustees, and one that carries with it many emotions. Pride. Nostalgia. Hope. But mostly, I feel a tremendous sense of gratitude. It has been an honor to dedicate the past 20-plus years of my life's work to a health system that has given so much to so many."

She wrote that she is excited to work with the search and transition process “before opening a new personal chapter of exploration, community involvement, postponed endeavors and more.” She looks forward, she said, “to catching up on some lost time with my husband Tom, and watching our grandchildren grow, just as I plan to watch LG Health continue to grow and shape the future of health care for our community and region."

"The Lancaster General Health Board of Trustees, Penn Medicine leadership and an advisory committee of local business and community representatives are leading a national search for a successor," according to the statement.

Lancaster City Mayor Danene Sorace wrote that the relationship with Bergen has been "a silver lining in the midst of COVID-19," as they traded late-night phone calls and texts "to meet the needs of our city with accurate information, increased access to testing, and initiating contact tracing."

Bergen's commitment to the city "is demonstrated through her leadership in addressing homelessness , school health, addiction, and by providing direct financial support to the city and School District of Lancaster," Sorace concluded.

“As a friend and colleague, I valued her investment in collaboration and addressing unmet needs,” Hilda Shirk, who retired in 2019 after seven years as leader of a different nonprofit headquartered downtown – Lancaster Health Center – said of Bergen in an email. “She was a great partner in delivering health care, assuring that it was accessible for all. Hopefully we'll continue to benefit from her leadership while in retirement.”

Bergen joined Lancaster General in 2000 as senior vice president of ambulatory care and the Women & Babies Hospital. She later became the system's first Chief Mission Officer and in 2010 served as CEO for eight months when then-CEO Thomas E. Beeman was recalled to active duty in the Navy.

“Thanks to her exceptional leadership, LG Health is recognized nationally for excellence in patient care and its relentless commitment to improving the health and well-being of all in our community,” said a statement from D. Michael Wege, chairman of the Lancaster General Health board. “For this and so much more, Jan has our profound gratitude.” 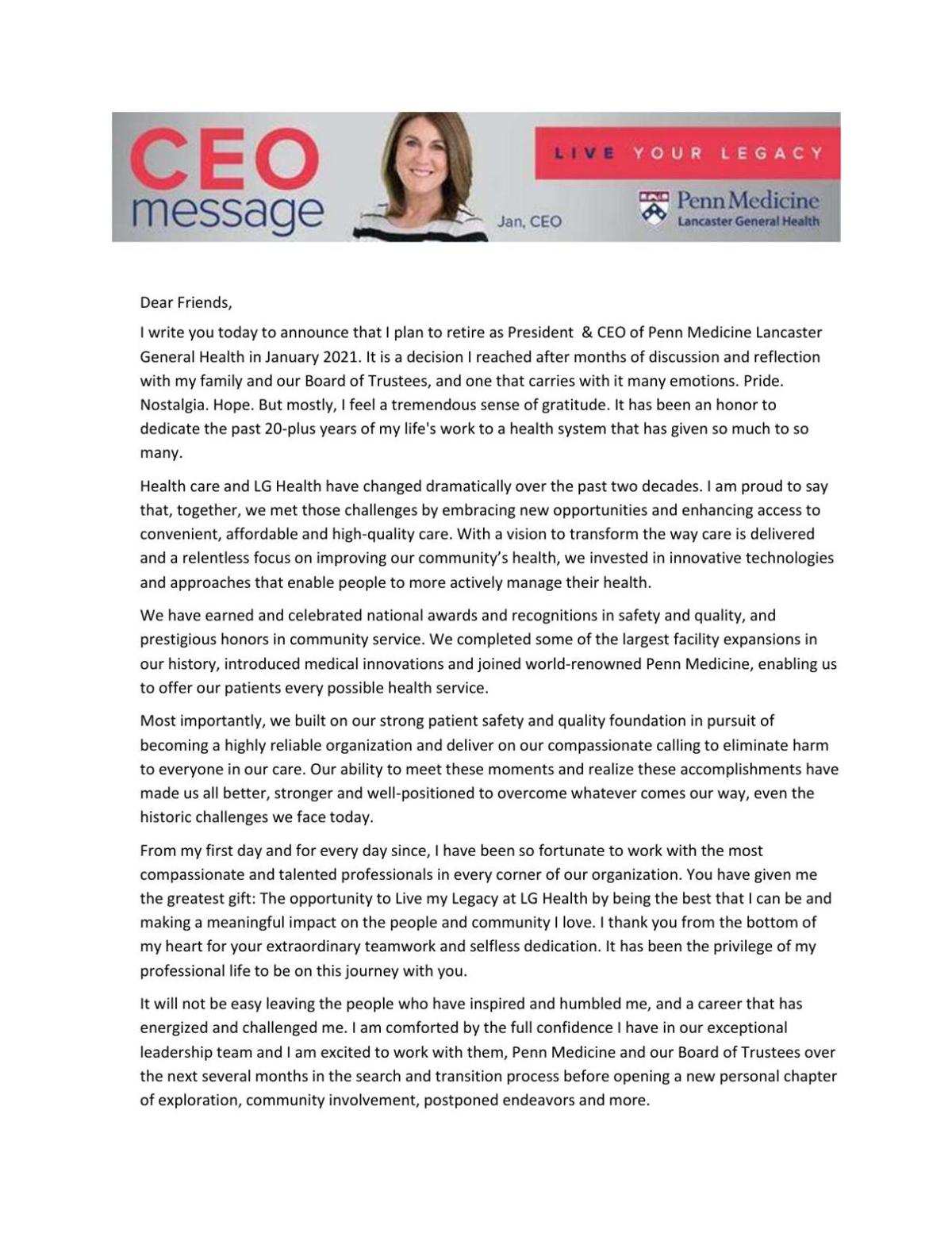 Faced with increasing demand that intensified with a neighbor’s recent closure, the largest …