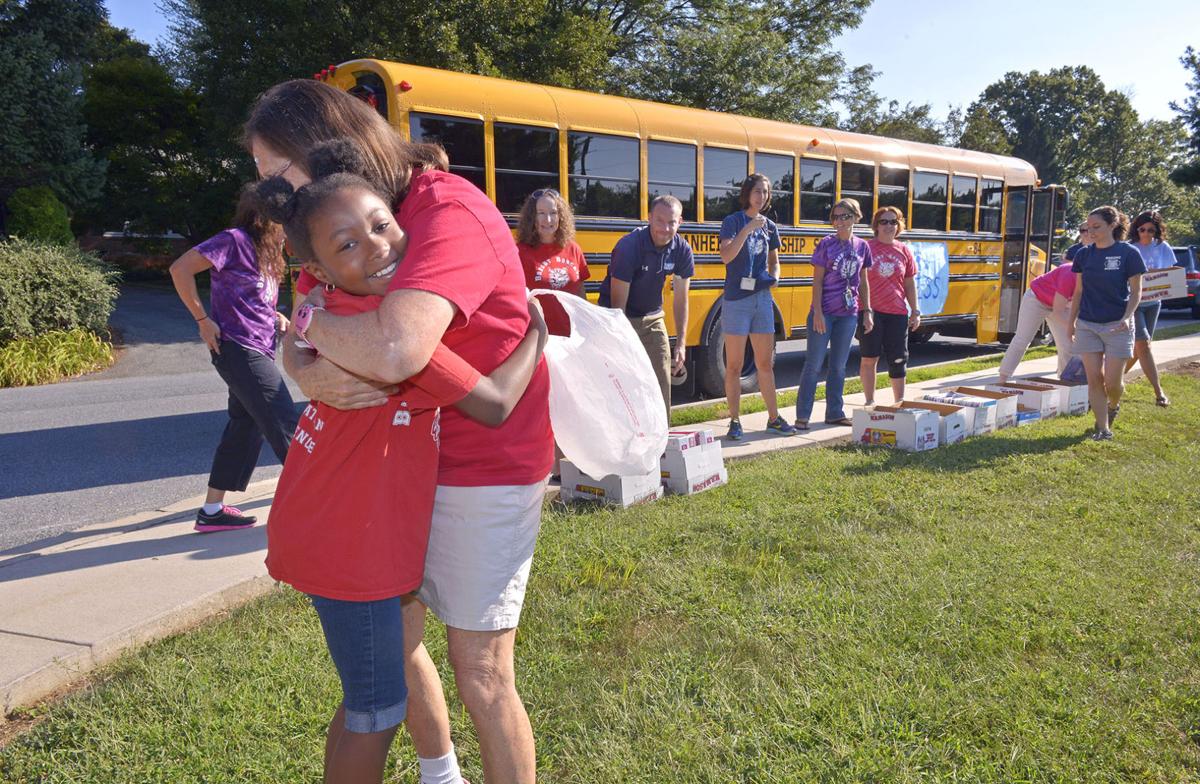 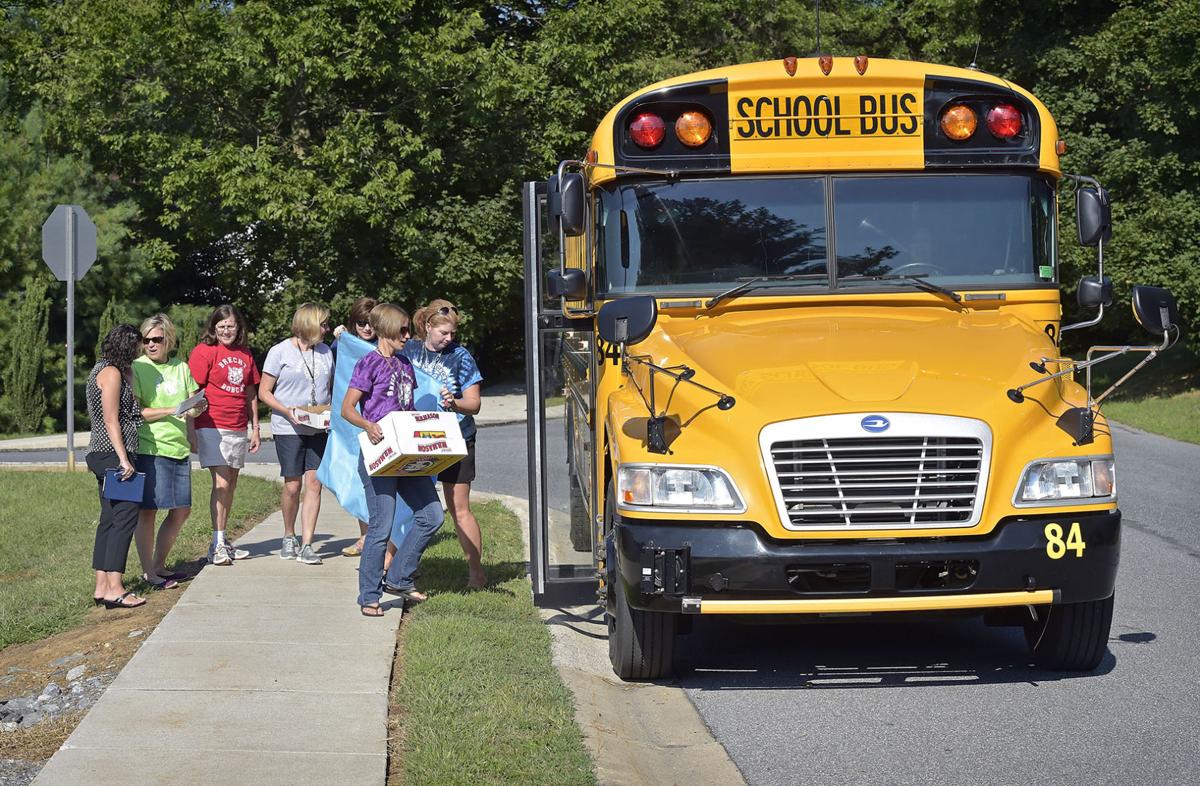 Teachers board their bus for the next stop on their tour. 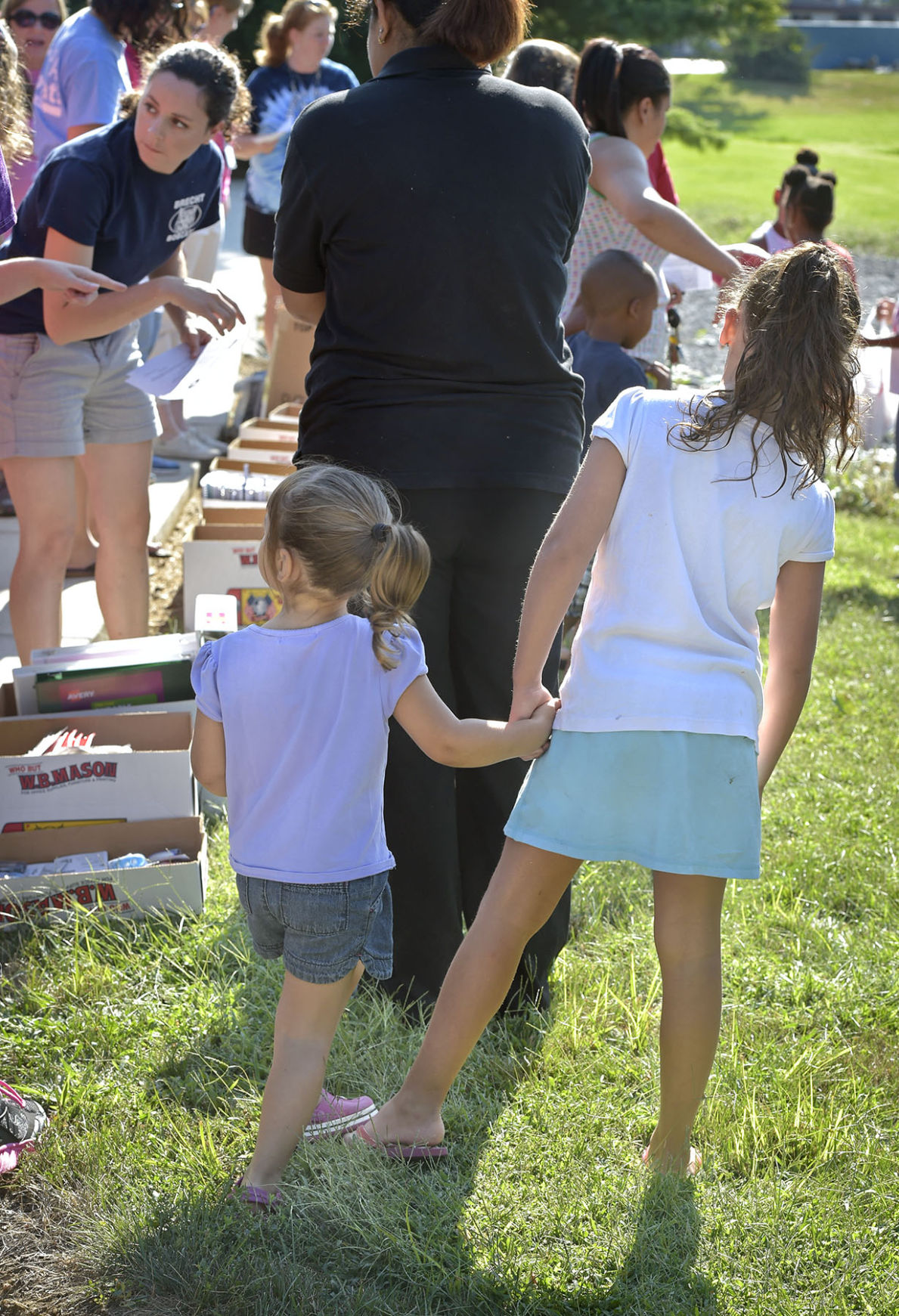 Children wait their turn to get school materials. 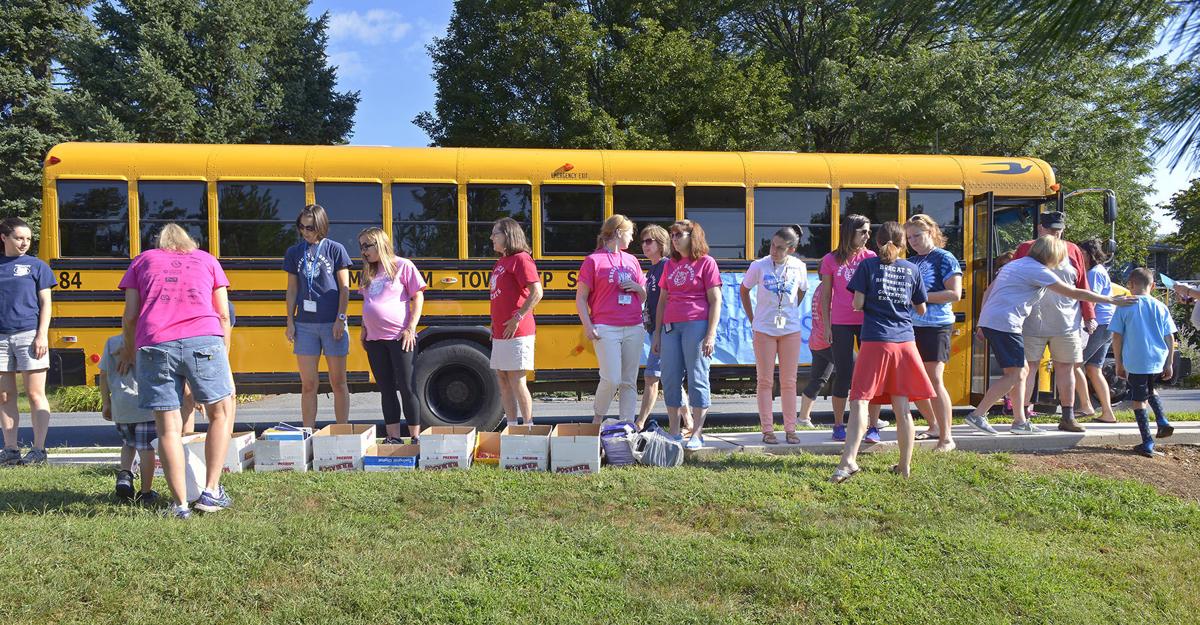 Brecht teachers line up by their bus to help distribute materials along Roosevelt Boulevard. 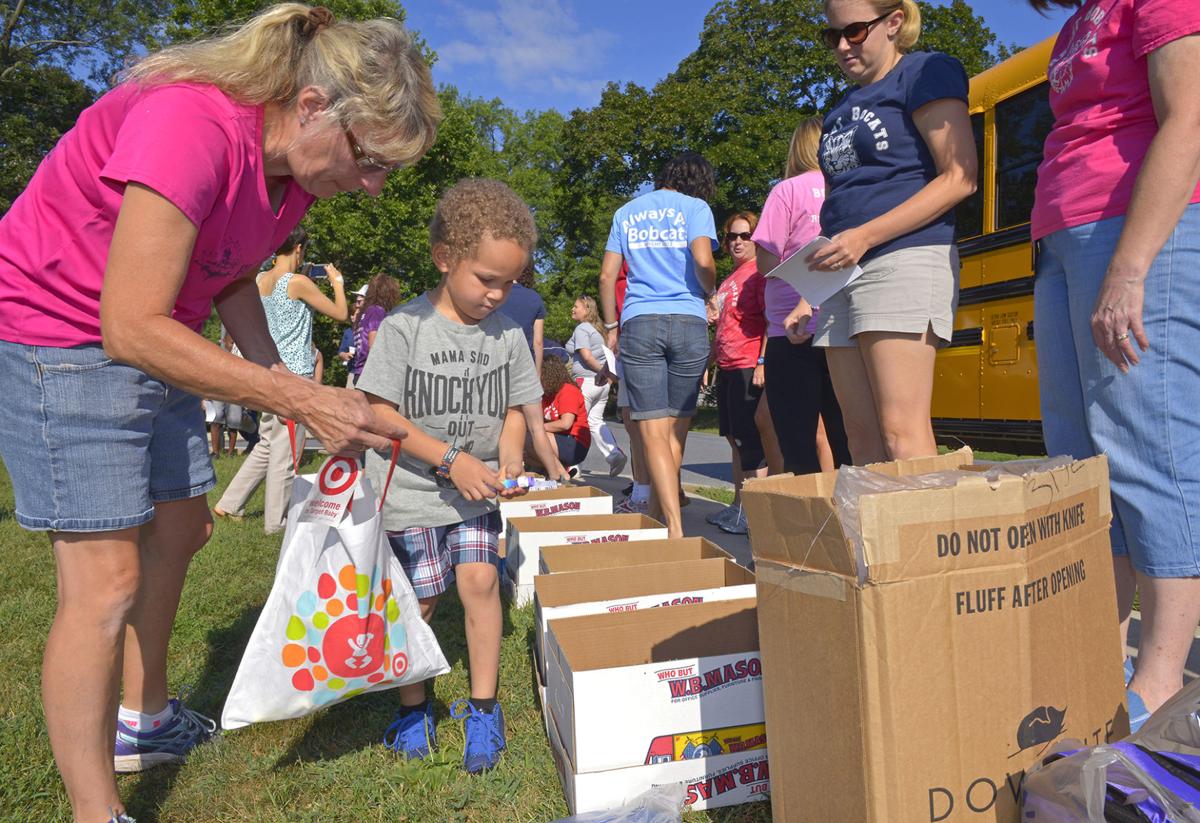 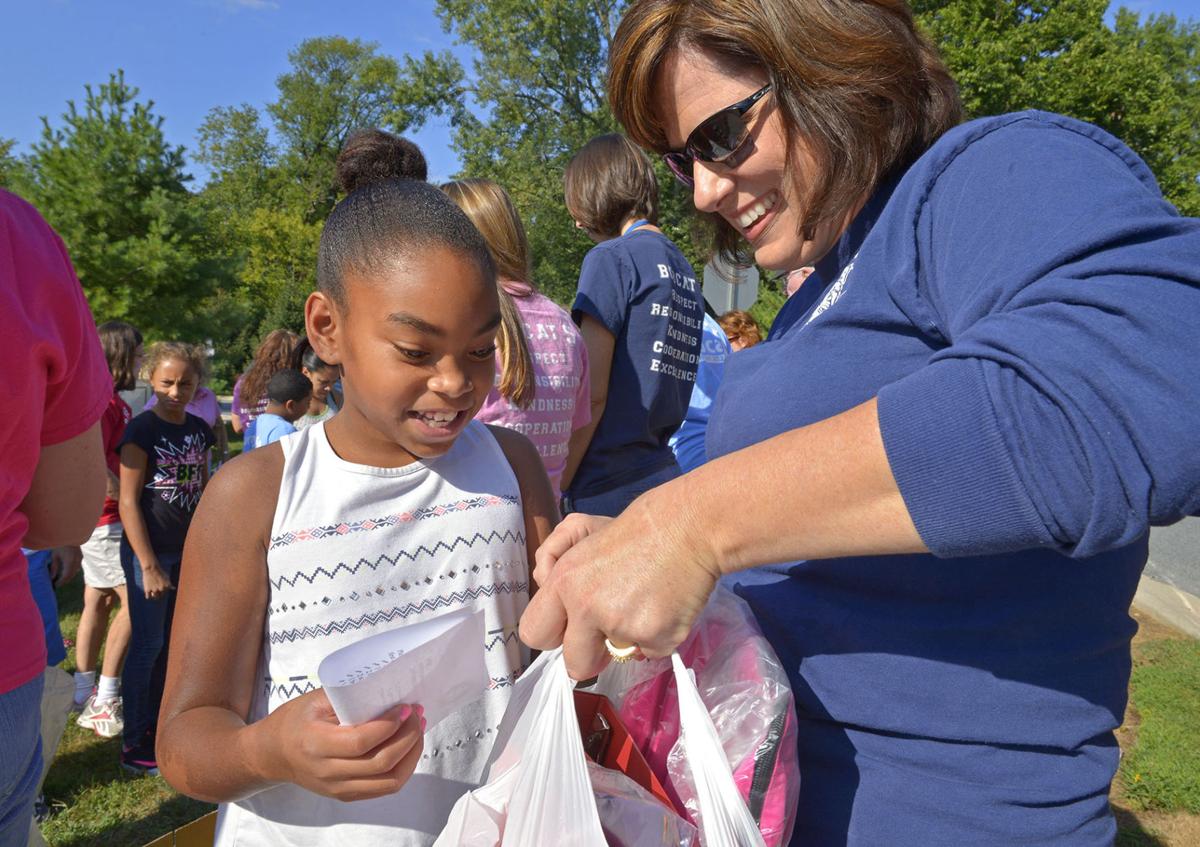 Heilly Alcantara is helped by her former 2nd grade teacher, Kira Yeager. Heilly will be in 4th grade. 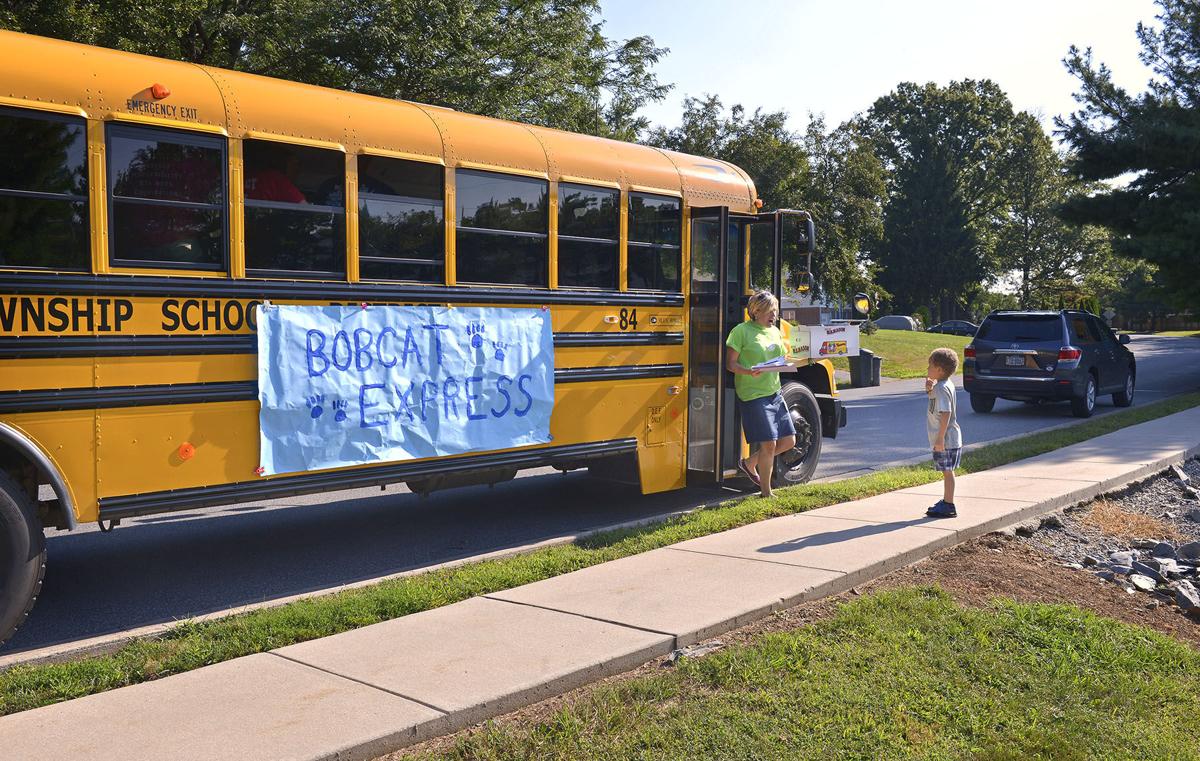 Brecht teachers arrive on a bus to pass out school supplies to school families in the area of Golden Triangle Apartments. Miykha Murray was one of the first students to greet them.

Teachers board their bus for the next stop on their tour.

Children wait their turn to get school materials.

Brecht teachers line up by their bus to help distribute materials along Roosevelt Boulevard.

Heilly Alcantara is helped by her former 2nd grade teacher, Kira Yeager. Heilly will be in 4th grade.

Brecht teachers arrive on a bus to pass out school supplies to school families in the area of Golden Triangle Apartments. Miykha Murray was one of the first students to greet them.

Sporting a red Brecht Bobcats T-shirt on Wednesday, Yenyia Terry, 9, greeted her principal with a hug. A school bus was parked a few yards away, but the fourth-grader wasn't the one who'd been on it.

Brecht Elementary School's staff rode the bus to Yenyia's apartment complex near Lititz Pike. It was the first of four stops as they traveled through Brecht neighborhoods to distribute school supplies and connect with families ahead of the first day of school, which is Monday.

When the teachers descended from the bus, they were met by children on foot and on bikes. The kids embraced former teachers, met their new ones and picked out notebooks as their parents ticked off supply lists.

Principal Sharon Schaefer chatted with Yenyia's mom, Ladon Johnson, while Yenyia selected a purple pencil sharpener, then swapped it for a pink one.

“We went school shopping and she wanted everything pink," said Johnson. "It's a nightmare,”

Schaefer laughed. “She loves it!” she replied before asking Johnson how work was going.

The conversation was simple, but important, according to the principal. Years of education research confirm that home-school connections have positive impacts on student learning, but most of the time, says Schaefer, schools expect parents to come to them.

She's one of two Lancaster County principals who are turning that expectation on its head.

Five years ago, when Sue Sneath took the helm at New Holland Elementary School, she noticed something odd: the school has Eastern Lancaster County School District's highest minority population — around 25 percent, according to the district — but that wasn't reflected in the families attending school events.

It's not because those parents don't care about their child's education. National surveys have shown that parents of elementary-aged white students are more likely to attend or volunteer at school events; however, research also indicates that minority parents are just as likely as other parents to be involved with their child's education in other ways, such as helping with homework, according to the Center for Public Education, a Virginia-based clearinghouse for school research.

But parent involvement at schools can benefit children, and Sneath wants all of New Holland's families to feel welcome and comfortable in the building. So in the summer of 2013, she made a plan: school staff would visit the homes of every incoming kindergartner before the year began.

Sneath told families not to clean or do anything special for the visit, but  some parents were apprehensive.

Three years later, the process is a little easier. The teacher (or administrator) arrives in summer clothes and sits on the floor with the soon-to-be kindergartner. She answers questions about school from kids and adults and reads a book, which the child keeps.

Alice Irwin, who taught kindergarten at New Holland for 10 years (but will move to first grade this year) saw the value of home visits right away.

"There was always that feeling of parents were anxious, kids were anxious (on the first day). This was a way to alleviate some of that,” she says.

Take one of Sneath's recent experiences, for example. This summer the principal visited the home of a family that spoke limited English. The child has never attended any kind of school before. Sneath promised him she'd be the first person he saw when he got off the bus.

The boy asked what she'd be wearing, and Sneath said the first thing that came to mind: a blue dress.

Sneath then answered his mom's questions about other families at the school. On her way out of the home, the boy cried out, “Don't forget your blue dress!” Sneath went home and ordered four blue dresses, since she didn't actually own any.

New Holland staff conducted 64 kindergarten visits this summer. Coordinating them is labor-intensive,  says Sneath, but it pays off. At New Holland's end-of-school fair in the first year of the visits, the PTO served 900 meals – almost double the amount of the previous year.

“It honestly consumes my entire summer, but the dividends from doing that are seven years of a strong, trusting relationship between school and home. I rarely get families that complain about a decision or a change I’ve made. I really believe I’m allowed to do that because families know that I care about the children.”

Schaefer launched Brecht's neighborhood outreach last year.  Before boarding the bus on Wednesday,  teachers said they were excited to do it again.

"This is a fun day for us, because it breaks down the barrier and lets parents know ‘We’re willing to come to you. We want to get this communication going,’ so it really translates into the year,” says second-grade teacher Mike Azzalina.

There's another purpose, too. While Manheim Township's overall rate of economically disadvantaged students is 25 percent, the figure at Brecht is 40 percent, according to state data. The supply giveaway helps  students start the year on equal footing.

Kira Yeager, another second-grade teacher, says the outreach day provides valuable insights for her. “I don’t think you truly get an idea of children until you see where they live and some of their situations. It helps you become a more understanding teacher when you understand what you see coming in the door.”

As for Johnson, Yenyia's mom, she was glad she didn't have to make an extra shopping trip. "It's just real neat that they're giving back to the kids, and also things that you forgot at the last minute — they have!"

Everything you need to know about back-to-school in Lancaster County for 2015-16.