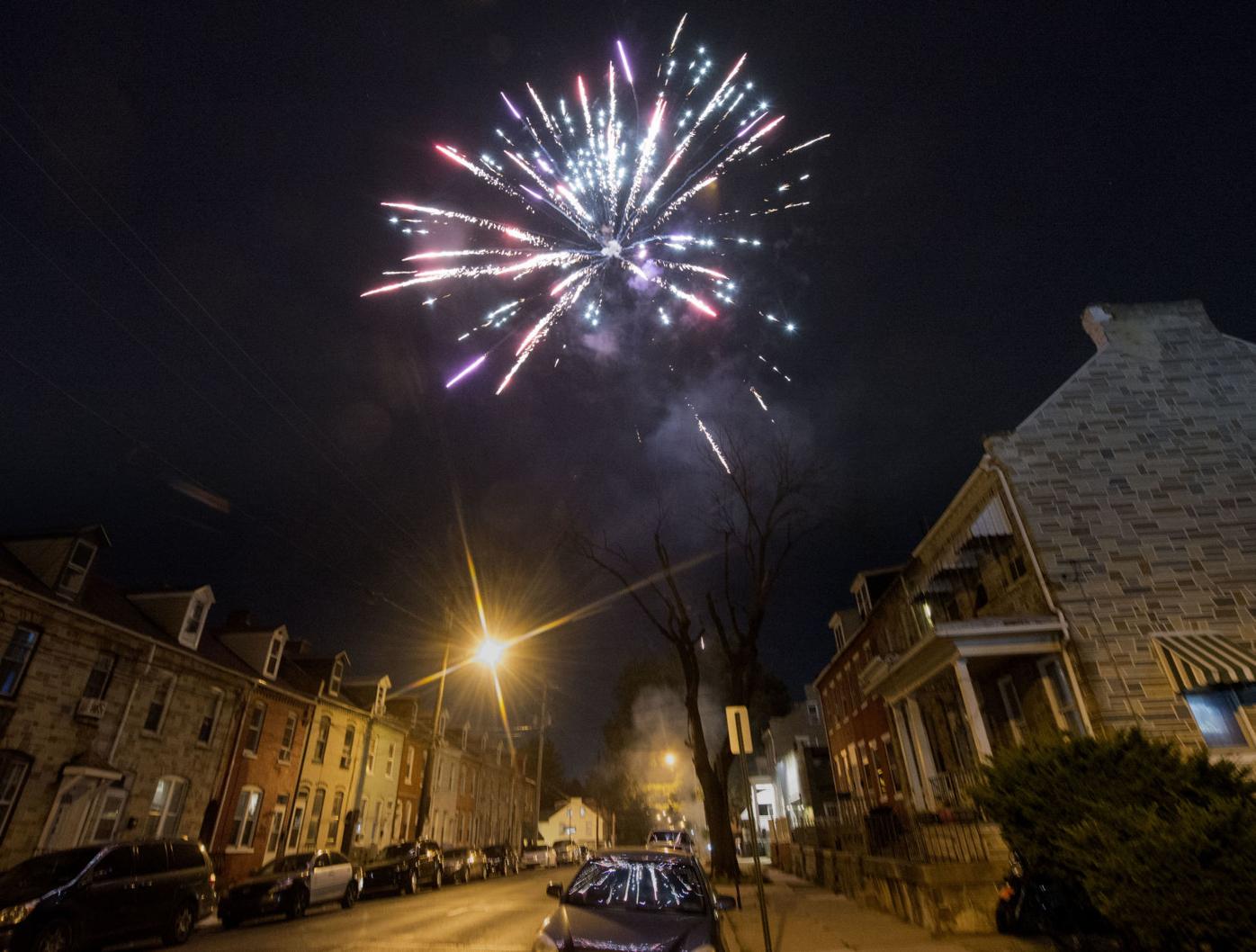 Fireworks are being launched from the sidewalk in the 400 block of South Prince Street Sunday, July 5, 2020. Pennsylvania law states that Class C fireworks like Roman candles, aerial cakes, artillery shells, firecrackers and bottle rockets cannot be discharged within 150 feet of an occupied structure, whether a person is actually present. 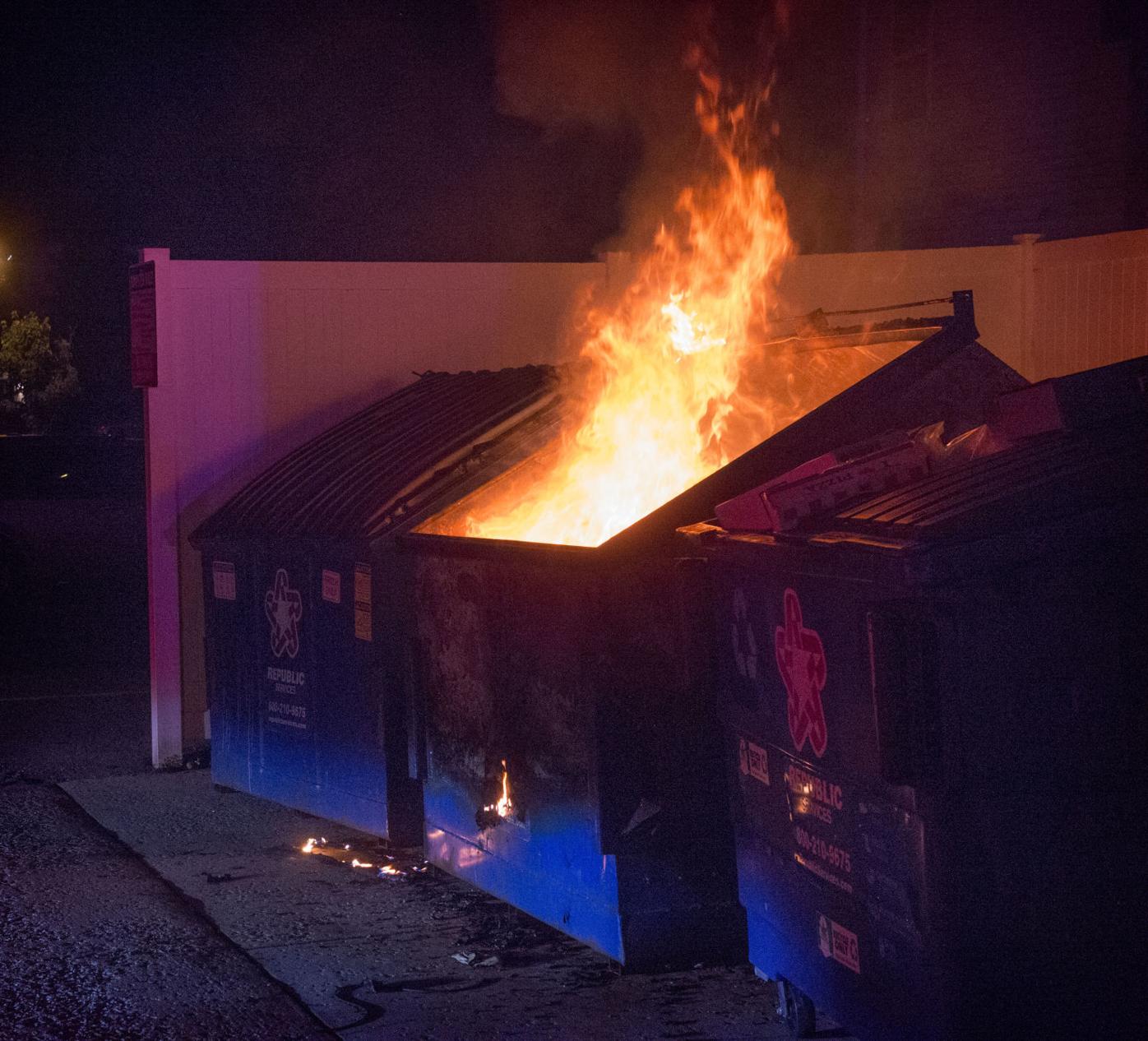 Firefighters responded to a call for a dumpster on fire at 120 Dickens Drive in Lancaster Township at about 11:00 p.m. Saturday, July 4, 2020. There were several other calls for trash and dumpster fires in other parts of the county Saturday evening. The rash of fires may be related to improper disposal of fireworks.

Fireworks are being launched from the sidewalk in the 400 block of South Prince Street Sunday, July 5, 2020. Pennsylvania law states that Class C fireworks like Roman candles, aerial cakes, artillery shells, firecrackers and bottle rockets cannot be discharged within 150 feet of an occupied structure, whether a person is actually present.

Firefighters responded to a call for a dumpster on fire at 120 Dickens Drive in Lancaster Township at about 11:00 p.m. Saturday, July 4, 2020. There were several other calls for trash and dumpster fires in other parts of the county Saturday evening. The rash of fires may be related to improper disposal of fireworks.

Ahead of the July 4th holiday, Lancaster officials announced a zero-tolerance policy for improper fireworks usage.

But after the smoke cleared from the festive three-day weekend, it turned out that only one fireworks citation was issued in Lancaster city, and it turned out to be a dud.

Scott Allen Murphy, who lives in the 100 block of Mary Street and was the city’s “neighbor of the month” in February 2019, received a summary citation for violating the city’s fireworks ordinance on July 3. He faced a $100 fine along with $93 in court costs.

But Murphy, 47, said after talking with the officer and District Judge Adam Witkonis about the spirit of the law and the difference between actual fireworks and novelties such as sparklers, the officer “graciously” agreed to withdraw the citation on Oct. 13.

Murphy said the officer “didn’t do anything wrong at all” and was following an ordinance that he thinks is over-restrictive.

Murphy said he knows the problems that can be caused by fireworks in the city. That’s why he said he specifically purchased items from the novelty section of Keystone Fireworks to entertain his young son. He purposefully avoided the more powerful consumer-grade fireworks that were on offer.

Still, Murphy said, even the novelty items he bought might run afoul of the law. Under his reading of the city’s ordinance, even sparklers are illegal.

That police were only able to issue one citation — only to withdraw it three months later — demonstrates the difficulty in enforcing fireworks laws.

The problem with enforcement is that police have to catch someone in the act. It’s like speeding, loud mufflers, motorcycles revving needlessly — you see and hear those transgressions, but even if you were to call police, the offender is long gone by the time officers arrive. Not to mention that fireworks are mostly set off in the dark of night.

Complaining about fireworks, The Watchdog knows, dates back well before the rockets glared red and bombs burst in the air above Fort McHenry. Ahead of this year’s Independence Day celebration, it seemed clear that there was little appetite among Pennsylvania officials to crack down on noisy incendiaries.

This summer, the author of the 2017 state law that opened up the market for consumer-grade fireworks, Lycoming County Sen. Gene Yaw, was quoted as saying, “We’re not going to repeal it. Get over it.”

Though a legislative aide told The Watchdog “we aren’t sure that statement is 100% accurate,” the underlying position was clear: The law was here to stay.

But after receiving a "copious amount of emails" after July 4, according to Yaw’s legislative director, Matt Osenbach, Yaw said he would introduce legislation to tweak the law to give municipalities some tools to combat lawbreakers. Also playing a role in shifting Yaw’s views was a fire attributed to improperly disposed of fireworks in York County. That fire killed an 8-year-old boy, injured three family members and destroyed a home.

“While I am well aware of the complaints and the illegal use of consumer products, particularly in more urban settings, I believe we can make modifications to help further improve the current statute,” Yaw wrote in a memorandum in July announcing his plan to introduce modification legislation.

The intent, Osenbach said, is to provide an incentive for police officers “to try to catch some people in the act.”

Osenbach said Yaw is looking to get input from law enforcement now that the legislation has been introduced. The senator is hopeful a legislative meeting might be scheduled in November.

A bill in the state House, co-signed by Lancaster Representatives Steven Mentzer and Mike Sturla, would set a maximum fine of $500 for a first offense and $1,000 for subsequent offense. It would restrict fireworks use to 10 a.m.-9 p.m. on Sunday-Thursday, except for July 4th, Memorial Day, and Labor Day, when they could be used until midnight, and until 1 a.m. on Jan. 1.

The Watchdog contacted Jess King, chief of staff for Mayor Danene Sorace, for reaction, but she declined comment.

“We will continue to work with lawmakers to find common-sense solutions that acknowledge the problems we’ve seen in the past years with illegal and unsafe usage, as well as enforcement. Also we have had conversations with local government associations regarding the law and their proposals,” Trego said.

“In the meantime, we encourage everyone to educate themselves on what the law requires, how to safely handle fireworks, and to be courteous to their neighbors when celebrating,” the statement said.

Osenbach also said education is important when it comes to fireworks.

Yaw’s intent with his 2017 legislation was to remedy an inequity, Osenbach said. Under the old law, Pennsylvania residents were generally unable to buy consumer fireworks — things such as Roman candles, bottle rockets and firecrackers. Those were sold at fireworks stores in Pennsylvania, but only to out-of-state residents.

Pennsylvania residents had largely been limited to so-called novelty fireworks — items such as sparklers and snakes. Display-grade fireworks — think the Barnstormers or your municipality’s July 4th fireworks display, have always been off-limits to consumers.

The Watchdog, who lives in the city and has heard fireworks that he knows are being improperly used (at all hours!), will be watching to see what progress the Legislature makes in changing the state’s fireworks laws.

As for Murphy, Lancaster city’s lone recipient of a fireworks citation over the July 4 weekend, he  said he celebrated the withdrawal of the citation with a grilled steak and a bottle of wine — and not by lighting off fireworks.

For people and pets sensitive to loud noises, the summer months -- especially the weeks arou…

How many Lancaster County students got approved for a school mask exception? [Lancaster Watchdog]

Despite the outrage many parents have displayed at school board meetings across Lancaster County since the Pennsylvania Department of Health announced its school mask order at the end of August, the number of approved mask exceptions is relatively low at most local school districts.

After a practically nonexistent flu season last year, health officials across Pennsylvania a…

Behind the counter in the Lancaster County Board of Elections office, tucked away in two of …

Is the Strasburg Rail Road whistle more disruptive than it used to be? [Lancaster Watchdog]

Danay Hershey is ready to buy her own house. But not near Paradise Township.