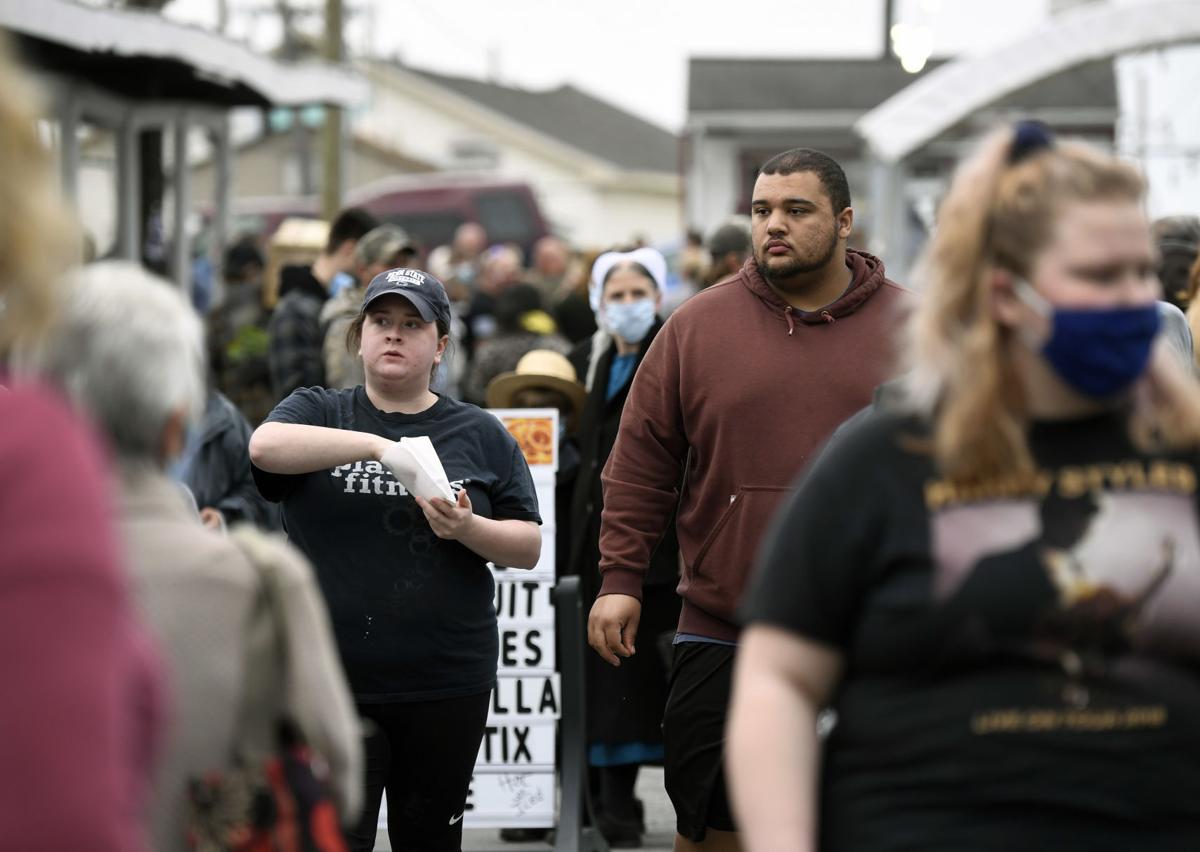 Shoppers at Root's Country Market and Auction in Manheim Tuesday May 5, 2020.

Conestoga Valley alum, Darryl Daniel, left, of Whole Sports Training Academy, works with athletes Brody Dennis, a junior-to-be at Downingtown East, Hilton Ridley, a graduate of Manheim Township and student-athlete at IUP and Xavier Roman also a graduate of MT and a student-athlete at Shippensburg, practice their moves on the lawn in front of McCaskey on Monday, May 4, 2020. 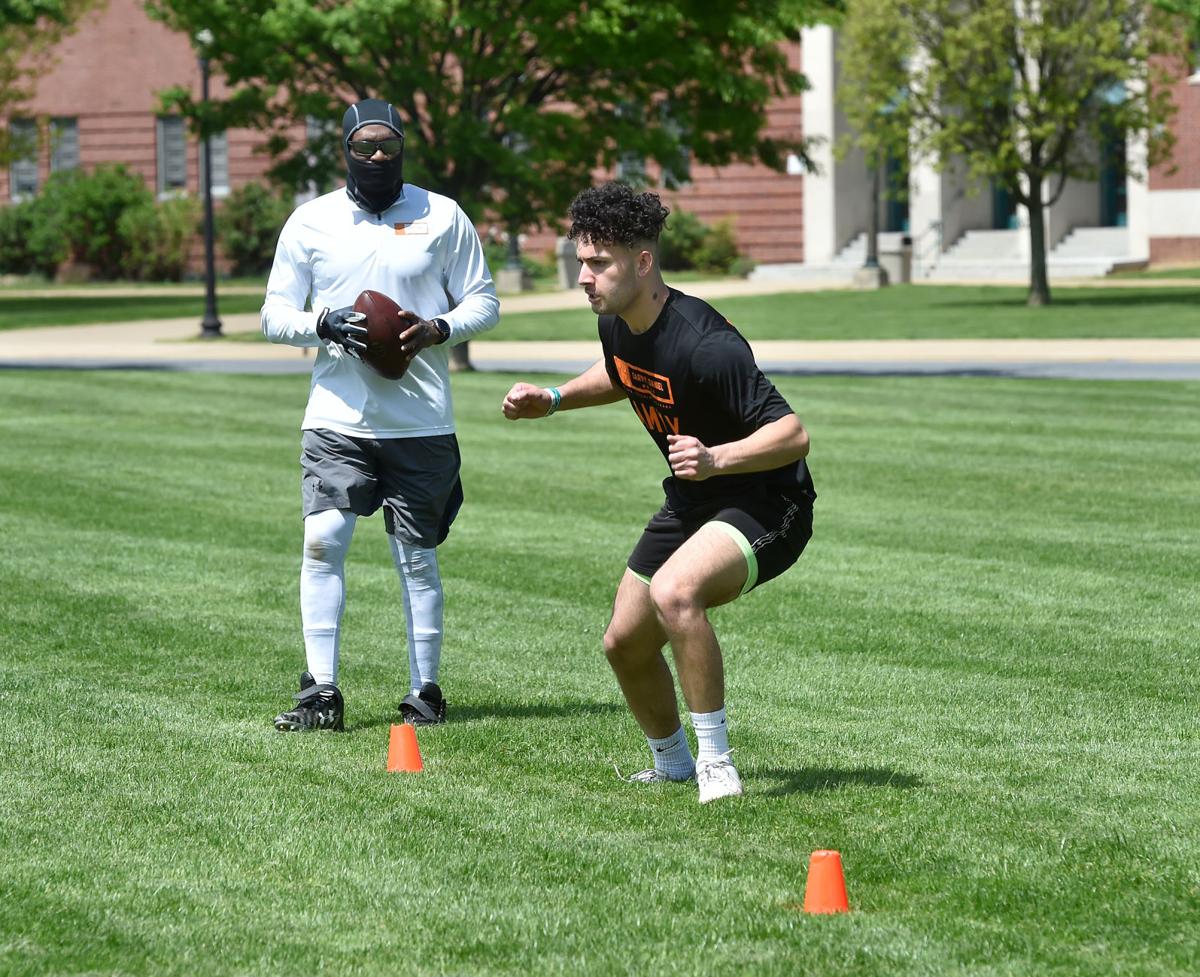 Conestoga Valley alum, Darryl Daniel, left, of Whole Sports Training Academy, works with athlete Xavier Roman a graduate of Manheim Township and a student-athlete at Shippensburg, as he practices his moves on the lawn in front of McCaskey on Monday, May 4, 2020.

The 75-year-old had a mask, too, but it was in her pocket. She couldn’t wear it while eating her ice cream.

“I just had to get the hell out of the house,” Leonard said, revealing that she was growing tired of Gov. Tom Wolf’s pandemic-related stay-at-home order, which mostly had her cooped up in her Luzerne County home. And she wasn’t alone.

Her restlessness came little more than a week before elected federal, state and county officials announced they would move to partially reopen Lancaster County this Friday -- a move that defies Wolf’s order that full COVID-19 restrictions should remain in effect until at least June 4.

On Monday, Wolf threatened to withhold funding from counties that open too early.

The push to reopen was announced in a Sunday letter signed by two county commissioners, as well as state and U.S. lawmakers, who plan to move the county from the most-restrictive “red phase” to less-restrictive “yellow.”

In their letter, they addressed Wolf claiming he had “lost the will of many people to continue on the extremely narrow path.”

'It’s kind of tamed down'

That’s true, according to Chris Ulrich, 22, who spoke about the weeks-long shutdown as he pushed around on a skateboard last week at Manheim Township’s Overlook Skate Park.

Ulrich of York traveled to Manheim Township because all of the parks closer to him were closed due to COVID-19.

He called the stay-at-home order a “nuisance” and admitted that he’s recently been hosting and attending house parties.

“I just think it’s kind of tamed down,” Ulrich said, adding that he thinks the seriousness of the virus has been blown out of proportion by media reports.

“I couldn’t get away from people,” Wallace said. “You couldn’t practice social distancing.”

A few days later, brother and sister RJ and Cassie Rawa of Elizabethtown hiked down from the overlook at Chickies Rock County Park in northwestern Lancaster County. It was a Monday morning and crowds were small.

Still, they had to pass one another on the trail. Few, if any of them, wore masks despite direction from state health officials that they should.

That’s true even while in the car waiting for food outside of restaurant drive-thru windows or at walkup counters at ice cream stands.

“Yes, since those people would be interacting with someone else, the person in the vehicle or at the window is required to wear a mask,” department spokesman Nate Wardle said.

At Chickies Rock, the Rawas -- both in their early 20s -- also admitted they have recently attended bonfires with friends who live in different households, though they try to maintain distance.

Moving Lancaster County into the “yellow phase” would allow some non-life-sustaining businesses to reopen and groups of up to 25 people to gather.

Darryl Daniel, an ex-NFL wide receiver has continued working with small groups of young athletes during the “red phase,” he said.

His head and face almost entirely hidden by a mask, Darryl Daniel appears in photographs shot early this month in a field outside of J.P. McCaskey High School, where he trained a group of three.

Through his W.H.O.L.E. Sports Training Academy, Daniel is used to training upward of 60 clients, as well as whole teams. Now he conducts mostly one-on-one sessions.

Daniel said he asks his trainees to wear gloves when handling shared equipment like dumbells, but he doesn’t make them wear masks.

“There is no way they can breathe like that,” Daniel said, explaining the training can be rigorous.

As time moves forward, Daniel suspects the number of group sessions he’s asked to host will only increase.

“Absolutely,” he said. “People are starting to get more comfortable as the government slowly starts to open up things.”

'It is fully our intent' to reopen schools in the fall, Pa. education secretary says

Hospitals, Democrats out of the loop on letter advising Gov. Wolf that Lancaster County would move to yellow

County officials did not advise local hospital officials before deciding Sunday to begin a cautious reopening this week.

Parking enforcement is resuming at some Lancaster County municipalities following a moratorium on street sweeping and metered parking tickets.

Highway traffic in Lancaster County and across the rest of the state has dropped significantly since March, when residents were ordered to sta…