A week-old fainting goat at Goat Flower Farm near Neffsville. 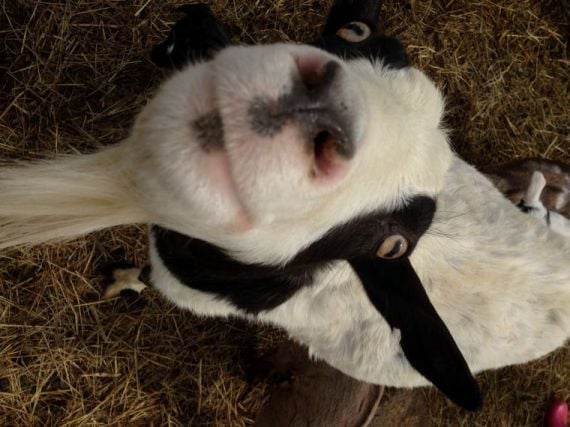 An adult female fainting goat is curious about the camera lens.

A week-old fainting goat at Goat Flower Farm near Neffsville.

An adult female fainting goat is curious about the camera lens.

Here’s a sure sign of spring: Lots of kids at Goat Flower Farm near Neffsville.

Thirty-six of them so far since Feb. 15. And four more does in their hay stalls, waiting to give birth and add to the merry jumping, frolicking and occasional fainting on the farm.

“It’s fun to watch,” says Carol Ellis, who along with her husband, Mark, and children have been raising and selling the tiny goats since 1996.

The goats generally top out at about knee-high. They may have long beards on their chins, or may not.

“They’re pretty and they’re friendly and they make just wonderful little lawn mowers,” says Ellis when asked about the attraction of the goats.

She sells them — often two at a time since they are herding animals — to people all along the East Coast.

The namesake “faint” unique to the goats is a genetic condition called myotonia that causes their skeletal muscles to instantly contract when they are startled, frightened or over-excited.

The “collapse” lasts about 10 seconds, then they hop back up as if nothing had happened. “It’s like a painless charley horse,” says Ellis.

This week is shaping up to be the warmest since mid-December and we’ll actually see more days in the 50s than the 30s, says Eric Horst, meteorologist at Millersville University’s Weather Information Center.

Both Tuesday and Wednesday will see temperatures well into the 50s and the mercury might even climb to 60 for the first time in 2014.

Wednesday will become rainy. A brief blast of air from Canada will chill the rain and may even result in the storm ending as wet snow showers Wednesday night.

Thursday will see a short-lived return to the freeze box. There will be gusty winds of up to 35 to 40 mph, making it feel like it’s in the single digits and teens.

But after that flashback to what this winter has largely been like, mild conditions will return for Friday and Saturday with highs in the low 50s on Friday and the upper 40s to low 50s on Saturday.

Another mix-type precipitation is possible from Monday into Tuesday.

Remember all that snow this winter that just recently seemed like it would never go away?

The snow cover is about gone, but it’s been around for 49 consecutive days, the second-longest carpet of snow here since 77 straight days in that snowy year 1996.

Vaccine storage demands could leave 3B people in virus cold

Ad Crable is a Lancaster Newspapers staff writer andÂ outdoors columnistÂ who covers the environment and nuclear energy. He can be reached atÂ acrable@lnpnews.comÂ or (717) 481-6029. You can also followÂ @AdCrableÂ on Twitter.