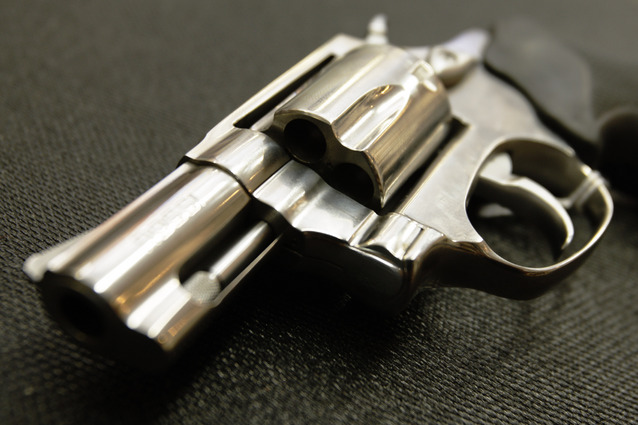 A handgun is shown in a file photo. (Lancaster Newspapers)

Visitors look at guns on display at the Great American Outdoor Show at the PA Farm Show Complex, Wednesday, Feb. 10, 2016. 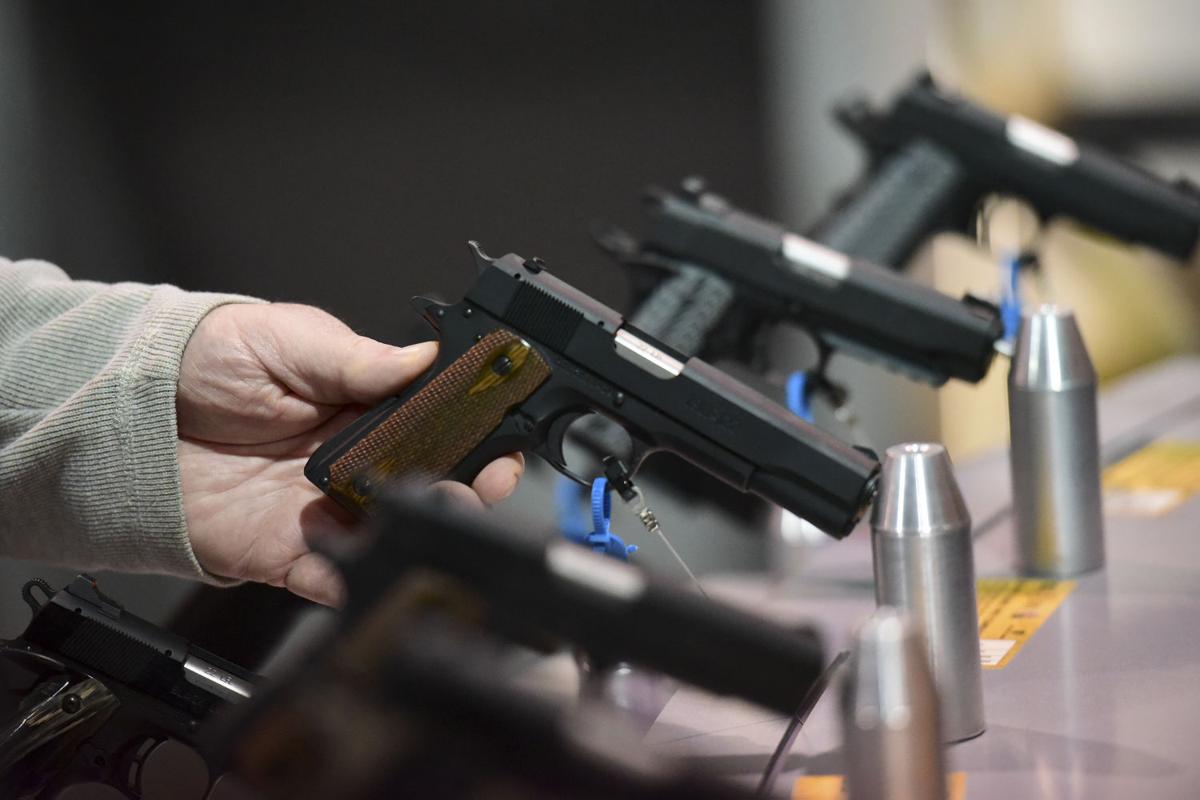 HARRISBURG — Every week, thousands of political activists, tourists and curious citizens walk through the Capitol building’s doors to get a glimpse of their government in action. And every one of them is run through a security checkpoint.

They empty their pockets, run their briefcases and bags through X-ray machines — and, if they’re carrying firearms, they’re required to store their guns with the Capitol Police.

“By law, firearms are prohibited from being carried in the state Capitol by anyone other than on-duty law enforcement officers, regardless of if an individual has a permit to carry a concealed firearm or not,” said Troy Thompson, a spokesman for the Department of General Services, the agency that has oversight of state buildings and the Capitol Police.

Pennsylvania’s elected legislators play by a different set of rules, though.

At least a dozen to two dozen members of the House of Representatives carry handguns in the halls of the Capitol building and even on the chamber floor, officials and former officials with knowledge of security told The Caucus newspaper, a publication of LNP Media Group.

Gun-rights advocates in the Legislature argue that allowing weapons in the Capitol, or any other public building for that matter, sends a warning signal to criminals.

“I believe the data that’s been compiled shows that law-abiding citizens carrying guns are the best deterrent to crime,” said Rep. Daryl Metcalfe, R-Butler County, who holds a permit to carry a concealed weapon but would not disclose whether he brings his gun to the House floor.

The practice worries some legislators, though, who say the hyperpartisan nature of politics in Pennsylvania and across the nation has created an atmosphere that is more volatile and susceptible to violence.

“Emotions can run high. We’ve got work to do. I don’t want to be concerned about someone carrying a gun,” said Rep. Madeleine Dean, D-Montgomery County.

The threat of gun violence is “a horror in places where government is trying to do its work.”

The practice also casts light on a creative interpretation of the law that prohibits guns inside public buildings that house courtrooms, such as the Capitol. Some lawmakers who are licensed to carry guns say that law, passed by the Legislature in 1995, doesn’t apply to the legislative branch of state government.

Emotions can run high. We’ve got work to do. I don’t want to be concerned about someone carrying a gun

"Emotions can run high. We’ve got work to do. I don’t want to be concerned about someone carrying a gun."

“They’re certainly allowed, and it’s legal,” said House Speaker Mike Turzai, a suburban Pittsburgh Republican. “It provides safety for them and for a lot of others.”

How safe the practice is for others and whether it’s legal is debatable.

Kim Stolfer, a weapons instructor and co-founder of the gun-rights group Firearms Owners Against Crime, said he doesn’t like the prohibition in Pennsylvania’s Capitol.

But he abides by it.

He said so-called “gun-free zones” are the least safest places to be.

Knowing people may be armed deters violent attacks, he says. In Pennsylvania, those seeking to purchase handguns are required to undergo a criminal background check. And they need a license to carry it concealed.

Carrying a firearm “is the right of every American citizen,” said Stolfer, a former Marine who helped write the Castle Doctrine law approved in 2013.

Rep. Bryan Cutler, a Peach Bottom Republican who serves as majority whip, said he is licensed to carry but doesn’t at the Capitol. He said it was his understanding it is legal for legislators to do so, and that it’s their constitutional right.

“I know that some do. I’ve heard individuals talk about it,” he said.

Sen. Ryan Aument said he has “no doubt that it happens,” but he’s never talked to his colleagues about it.

The Landisville Republican, who served as an army captain in Iraq, said he doesn’t have a license to carry and he hasn’t felt the need to handle guns since he left the military.

He’s never felt unsafe at the Capitol, but he said he’d understand if some lawmakers carry while they’re out in downtown Harrisburg. Bringing those weapons onto the House or Senate floors, though, would be unnecessary, he said.

“Maybe it does happen. I don’t know,” Aument said. “Certainly there’d be no need for it.”

Who carries, who doesn’t

More than two dozen other states allow guns in capitol buildings, according to the National Conference of State Legislatures. Of those states, nine permit “open carry,” 13 allow firearms owners with permits to carry and four allow legislators or legislative staff to carry in the capitol.

The legislative policy-tracking agency did not classify Pennsylvania, whose crimes code conflicts with the Legislature’s passive approach on carrying guns in the Capitol.

Exactly how many House or Senate members carry firearms on a given day isn’t known. There’s no record of who’s carrying on the floor. Members typically won’t talk about it publicly.

Pennsylvania bill, if approved, will let voters decide whether or not to cut size of 203-member House of Representatives

“No one wants to be the test case,” Metcalfe said.

Metcalfe, asked whether he carries on the floor, said “I never reveal to anyone whether I’m carrying.” It is a safety issue, he said.

Metcalfe said he agrees with the Department of General Services that members of the public cannot carry a weapon in the Capitol. But he said he does not believe that applies to the Legislature, a separate branch of government. “I think separation of powers changes the issue for the Legislature,” he said.

One state senator who spoke on the condition he not be identified for this report because of the sensitive nature of the topic said a number of his colleagues in the Senate, and their staffers, carry guns in the Capitol.

What the law says

The 1995 law prohibiting guns in public buildings with courtrooms also applies to the Capitol because the structure is home to a courtroom occasionally used by the Pennsylvania appellate courts, Department of General Services spokesman Thompson said.

Thompson said the prohibition on weapons in the Capitol is contained in Section 913 of the Pennsylvania Crimes Code, which deals with the “possession of firearm or other dangerous weapon in court facility.”

Breaking the law can be a summary offense or a misdemeanor.

Spokespeople for the Senate and House Republicans implied the General Assembly is exempt from the no-gun law but stopped short of saying so.

“Senate security is responsible for ensuring safety and order in the Senate chamber,” said Kate Eckhart Flessner, the communications director for the Senate president pro tempore.

Firearms are not permitted in the public gallery, and visitors must first pass through a metal detector, she said.

In the House, GOP spokesman Stephen Miskin said “apparently we don’t have a rule about guns on the floor. There is obviously the DGS rule because there’s a court upstairs. Obviously some (lawmakers) might argue separation of powers.”

Rep. Dan Frankel, D-Pittsburgh, who supports universal background checks, limits on magazine capacity and requirements to report lost or stolen guns, said he believes lawmakers should be treated no differently than citizens when it comes to carrying guns in the Capitol.

If carrying guns is a matter of safety in the Capitol, who protects the lawmakers and staffers who aren’t armed?

The Capitol Police, an accredited law enforcement agency, has jurisdiction throughout the Capitol, but not in House and Senate offices or the floor of each chamber, officials said.

The House and Senate have their own security details, but those officers don’t have arrest powers, and they are not armed.

And though there are security measures designed to protect legislators and their staffers, many people doing business in the Capitol — lobbyists, reporters and vendors — hold badges that allow them to bypass scanners.

House Chief Clerk David Reddecliff said enforcing the law preventing guns in the Capitol is difficult “when so many people could carry a weapon in” and not be scanned because they have security badges.

As for legislators who are packing?

“I don’t care whether members are carrying guns,” Reddecliff said.

Investigative reporter Michael Wereschagin contributed to this report from Pittsburgh.