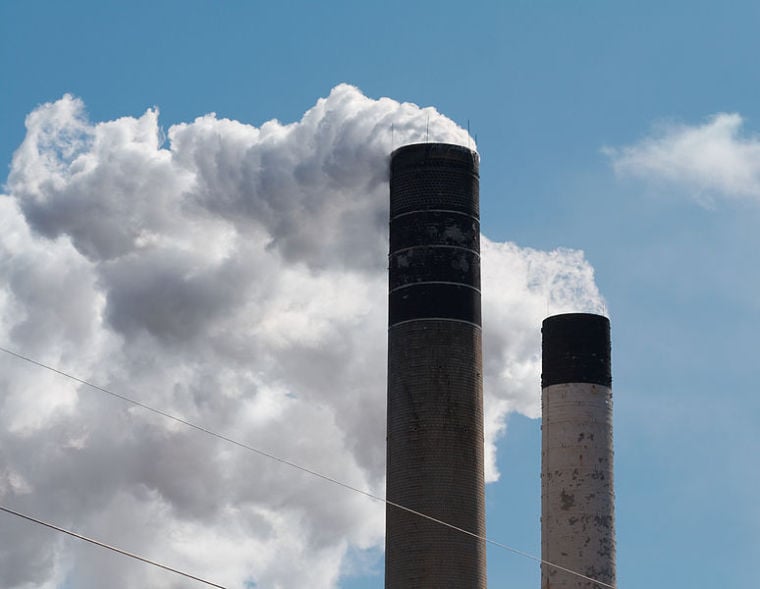 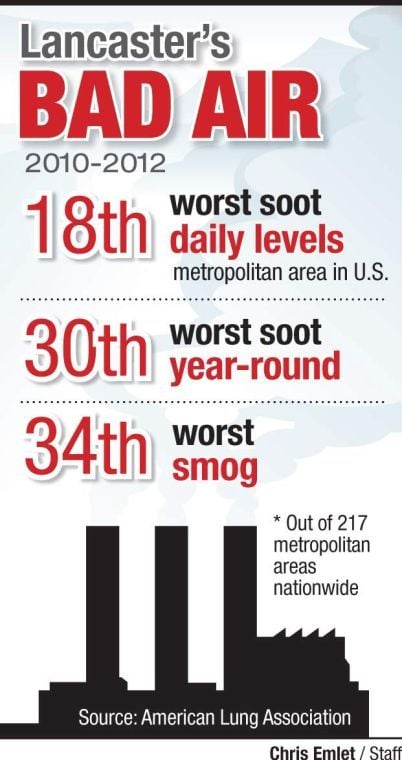 The air Lancaster County residents breathe continues to be among the worst in the nation, according to the American Lung Association.

In the ALA’s annual “State of the Air” report, which examined federal pollution records from 2010-2012, Lancaster County ranked as the 18th-worst metropolitan area out of 217 in the United States for average daily levels of particle pollution, which is composed of soot, dust particles and aerosols.

The Harrisburg-York-Lebanon metro area was tied with Lancaster.

The 18th-worst ranking was a dramatic downslide as the county ranked 37th worst in last year’s report. However, the ALA noted that the worse ranking in daily soot was due, in part, because some smaller metropolitan areas were merged with larger, more polluted, ones by the federal Office of Management and Budget.

Lancaster County dropped in another of the three major categories of air pollution as well.

The county tallied the 30th-worst air pollution for year-round soot levels, according to the ALA. Last year, its ranking was 44th worst.

For ozone, which becomes smog when it reacts with sunshine on warm days, Lancaster County was the 34th-worst metropolitan area. Last year, it was 33rd worst.

The county had an average of 11 unhealthy days per year, the most since the 2010 report.

For Lancaster County, smog monitors are maintained at Lincoln Middle School in Lancaster city, and a downwind monitor in Leacock Township.

“Ozone and particle pollution, combined and separately, present real threats to Americans’ health,” noted Kevin M. Stewart, a Lancaster County resident who is director of environmental health for the ALA of the Mid-Atlantic.

Stewart said smog is a powerful respiratory irritant that sears lung tissue, and at relatively low levels, can affect even healthy people’s ability to breathe. Fine particle pollution, or soot, can cause serious health problems as it becomes embedded in the lungs.

Particle pollution is responsible for tens of thousands of premature deaths in the U.S. each year, according to Stewart.

Those at greatest risk from smog and soot pollution are infants, children, older adults and anyone with lung diseases such as asthma, diabetes and heart disease.

Lancaster County received a “F” grade from the ALA for all three sources of pollution.

But bad as it was, Lancaster did not record the worst readings even in Pennsylvania in any of the three categories.

“Even though Lancaster experienced an increase in ozone smog and particle pollution, the air quality is still better compared to a decade ago,” noted Deb Brown, president of the ALA of the Mid-Atlantic.

“More obviously needs to be done in the Lancaster area. We must set stronger health standards for pollutants and clean up sources of pollution in southcentral Pennsylvania to protect the health of our citizens.”

In contrast to Lancaster’s results, the ALA stated that the Clean Air Act has shown a trend of cleaner air across metropolitan areas nationwide.

The ALA urged such steps as cleaner gasoline and cleaner vehicle emissions standards by Congress and the EPA to drastically cut smog and soot levels nationwide.