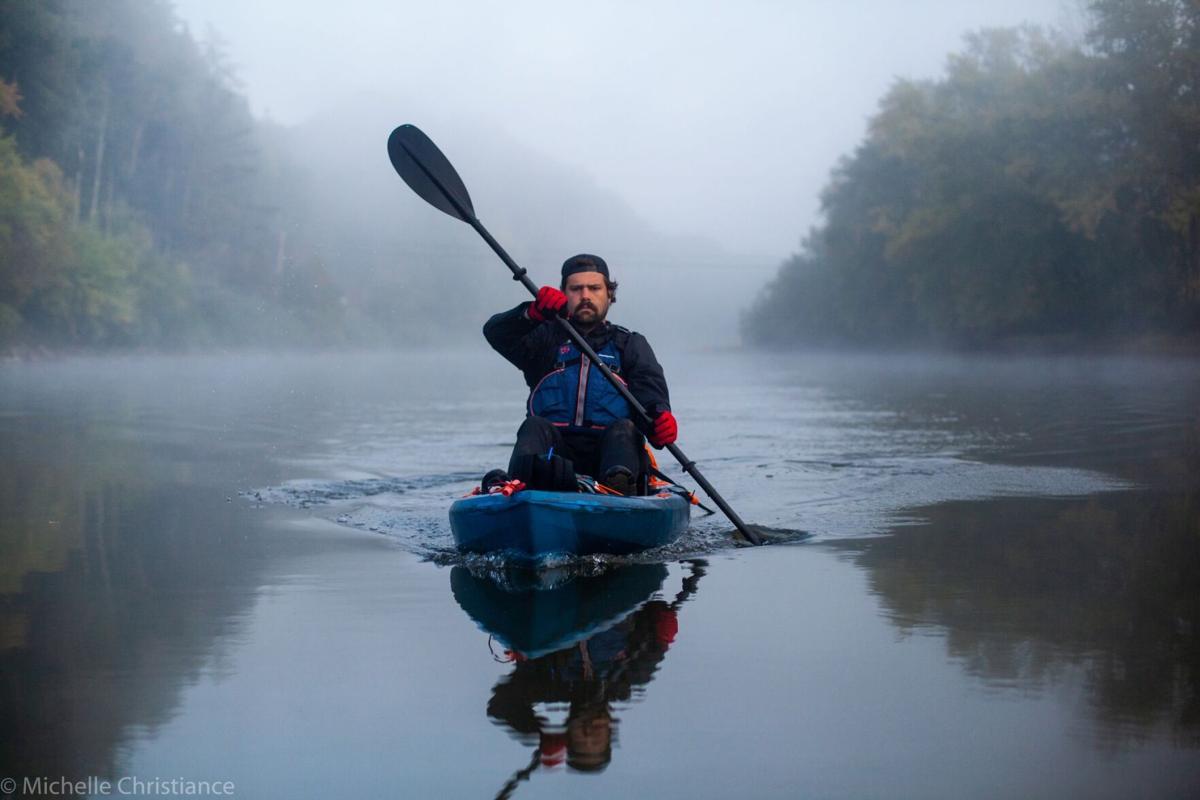 Joel Witwer paddles along the Susquehanna River during his 18-day, 444 mile adventure during September and October 2020. 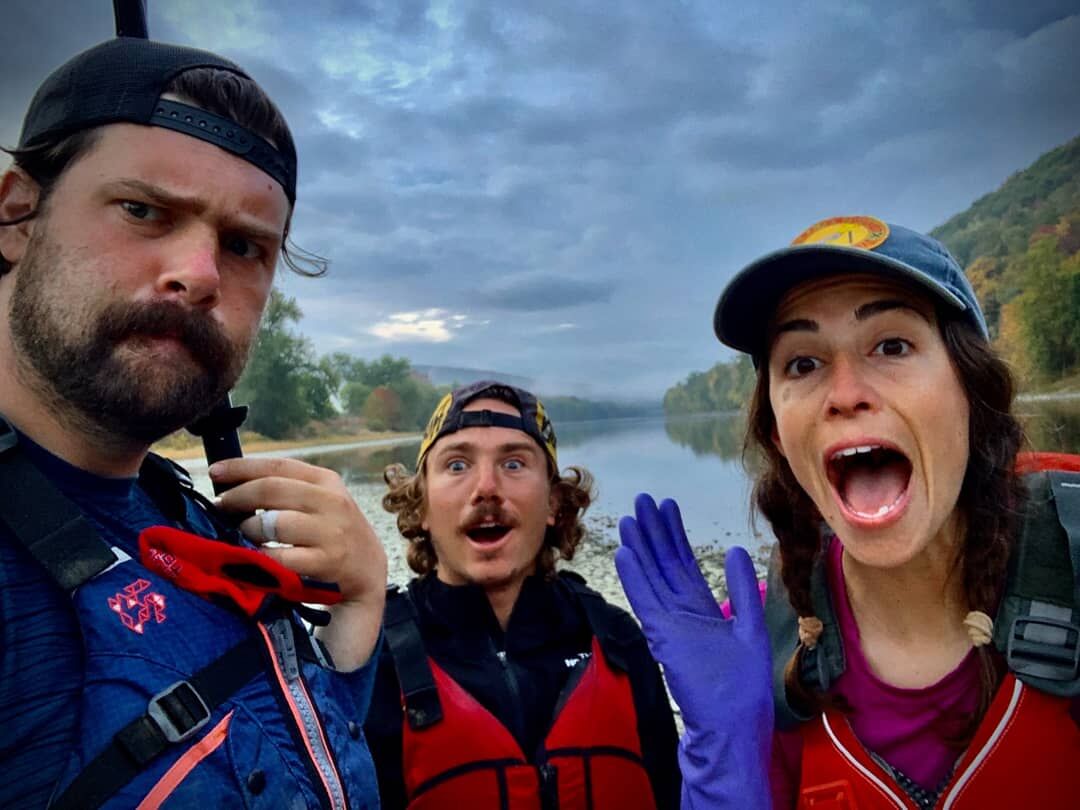 From left, Joel Witwer, Zach Miller and Michelle Christiance, along their 444-mile kayak journey of the Susquehanna River during September and October 2020. 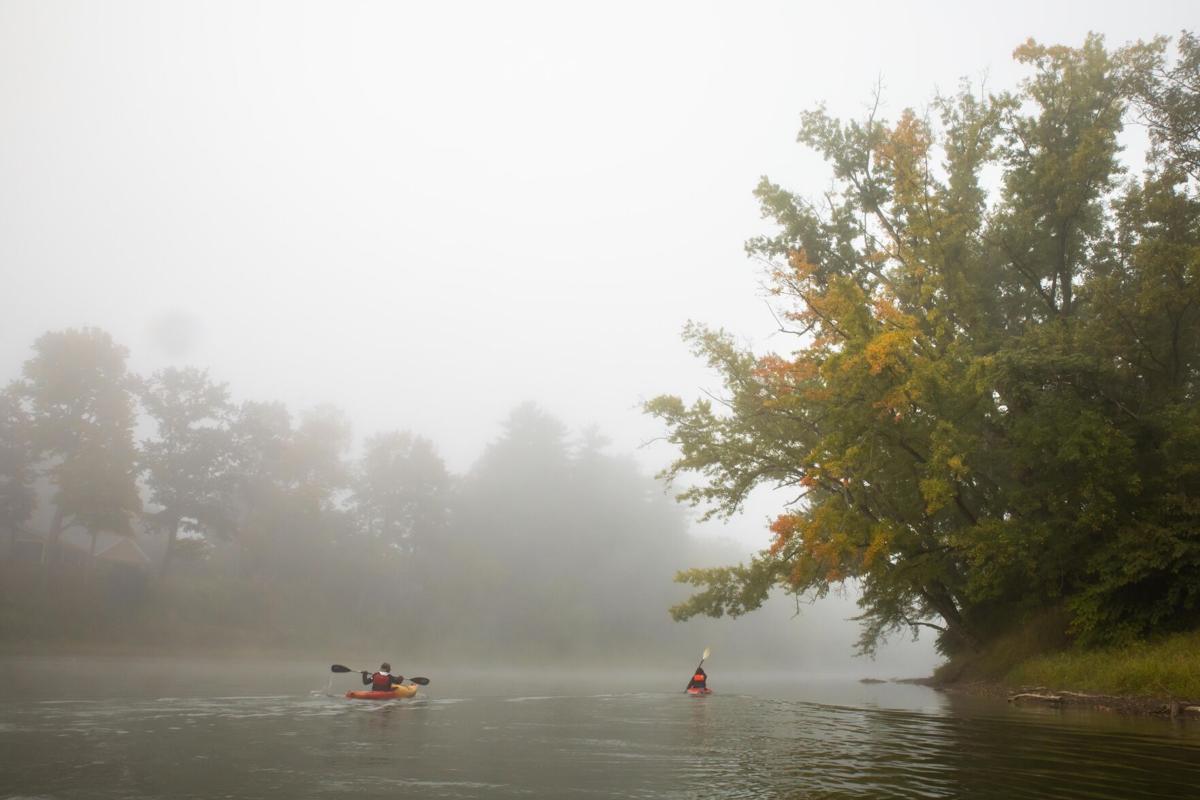 Fog hangs over the Susquehanna River during the 444-mile kayak adventure in September and October taken by Joel Witwer, Zach Miller and Michelle Christiance. 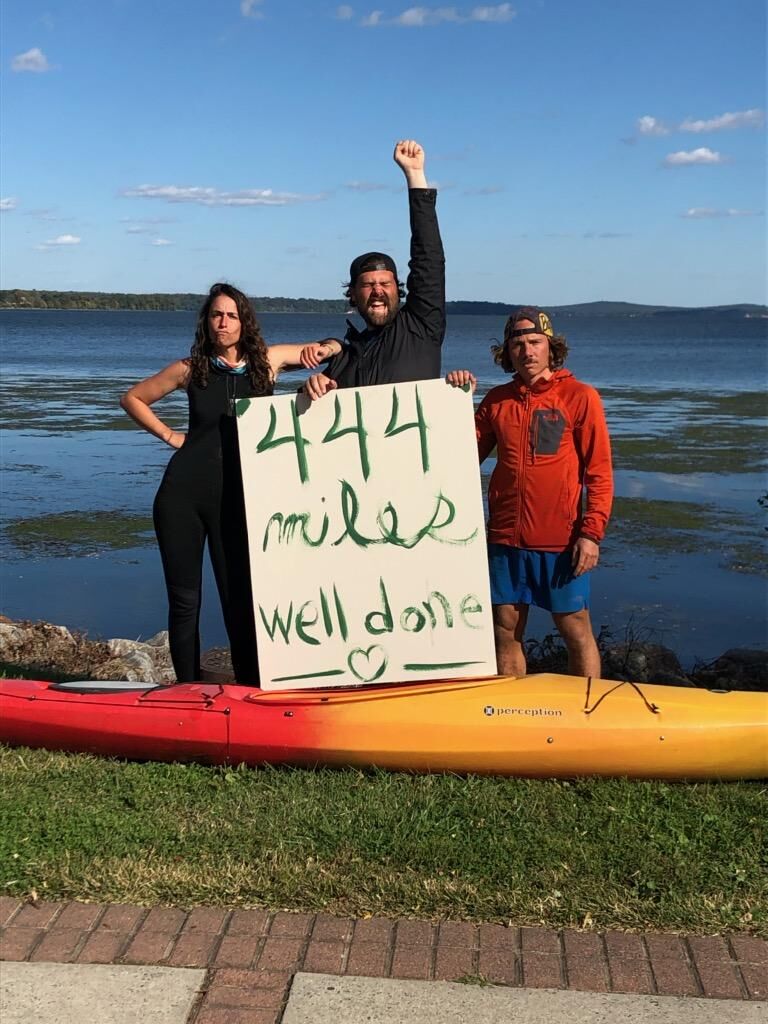 From left, Michelle Christiance, Joel Witwer and Zach Miller celebrate the end of their 444-mile kayak journey of the Susquehanna River, on Oct. 8, 2020, in Havre De Grace, Maryland. 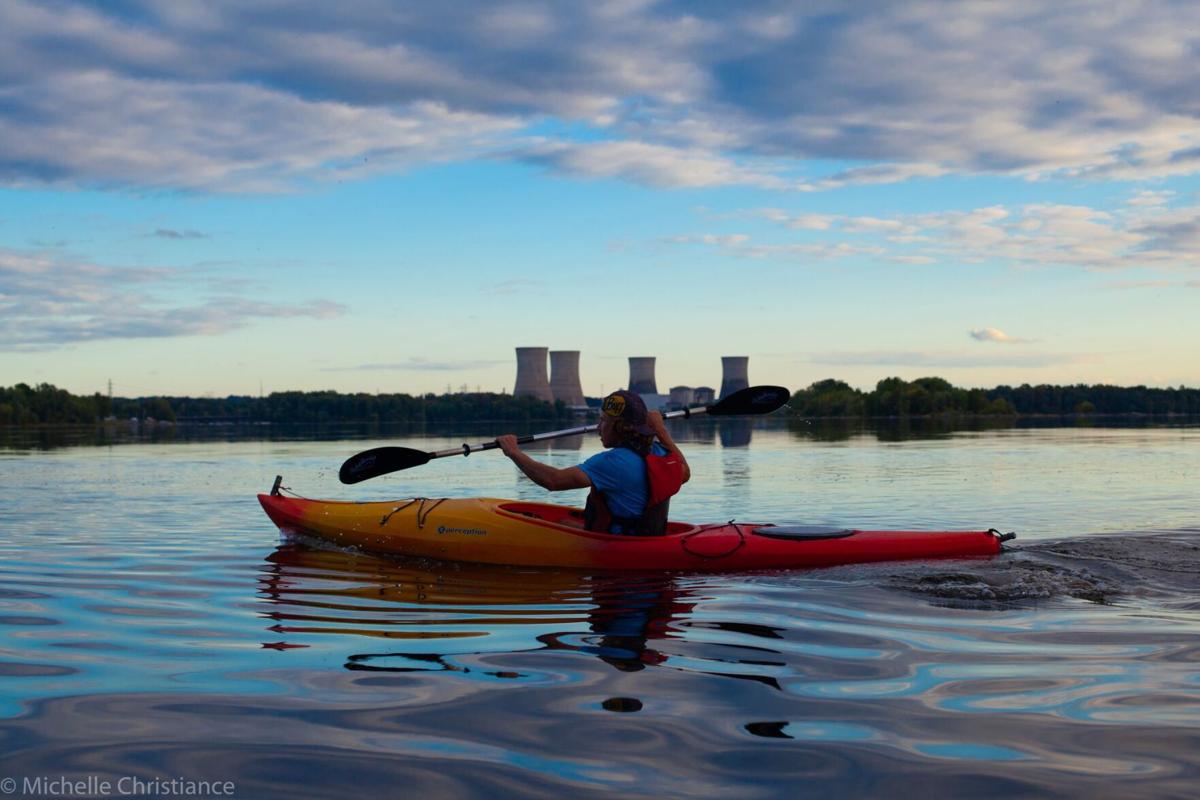 Zach Miller paddles on the Susquehanna River with Three Mile Island as a backdrop. 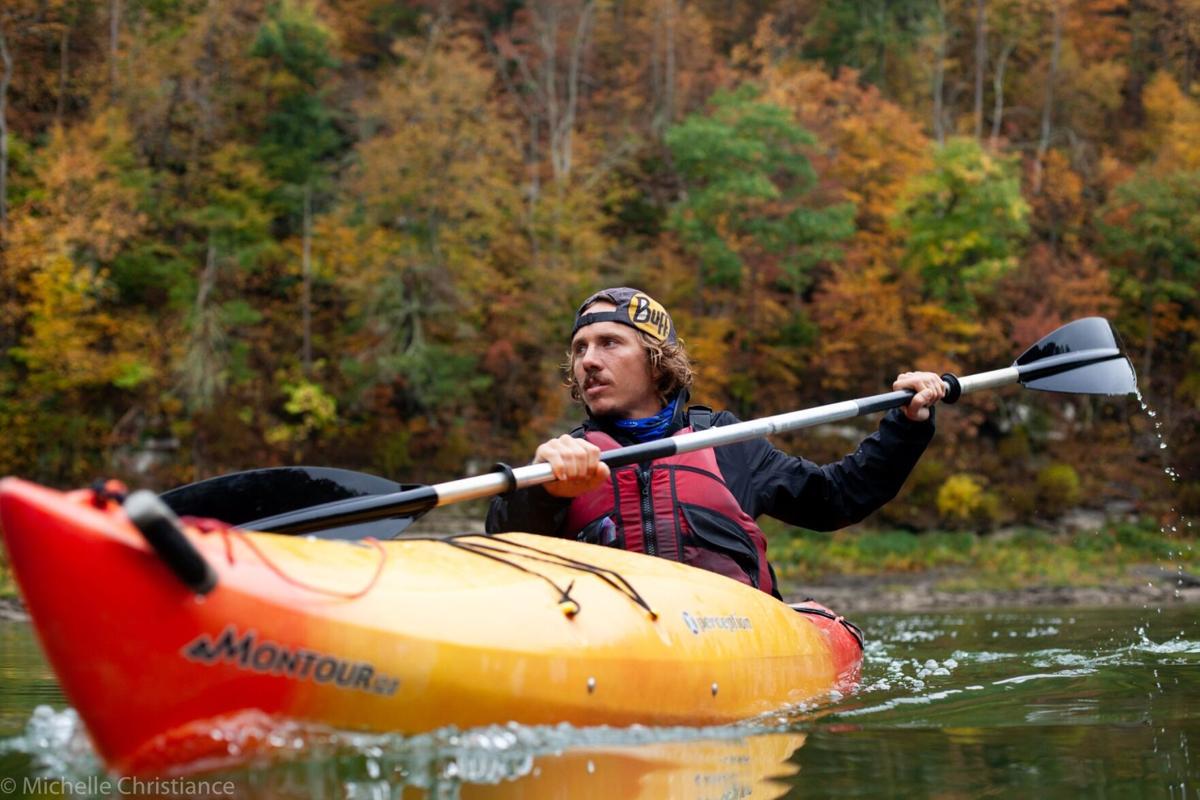 Zach Miller paddles along a 444-mile kayak journey of the Susquehanna River during September and October 2020.

Joel Witwer paddles along the Susquehanna River during his 18-day, 444 mile adventure during September and October 2020.

Fog hangs over the Susquehanna River during the 444-mile kayak adventure in September and October taken by Joel Witwer, Zach Miller and Michelle Christiance.

Zach Miller paddles on the Susquehanna River with Three Mile Island as a backdrop.

Zach Miller paddles along a 444-mile kayak journey of the Susquehanna River during September and October 2020.

You could say Joel Witwer’s recent adventure was inspired by the COVID-19 pandemic, or maybe the right word is “necessitated.”

Witwer, who grew up in the Hershey area, recently kayaked the entire length of the Susquehanna River with two college friends, one of them Zach Miller, the professional ultrarunner from West Hempfield Township.

Over 18 days in September and October, the trio paddled 444 miles from the headwaters in Cooperstown, New York, to Havre De Grace, Maryland, where the East Coast’s longest river flows into the Chesapeake Bay.

Witwer, 31, was on a monthlong break from his job in Ethiopia, where he does communications for CURE International. The Christian nonprofit operates hospitals around the world, providing free care to children with disabilities.

Witwer tries to pair trips home with an adventure — hiking or exploring somewhere. But the COVID-19 pandemic limited his options.

So, he said, an idea that had kicked around in his head since college began to take hold. He used to drive alongside the Susquehanna between home and Rochester Institute of Technology, where he went to school. Wouldn’t it be cool, he always wondered, to paddle it.

“There’s been this curiosity with the river. I thought it would be fun, but there were always distractions. I thought, with being stuck in the states, this might be the time to do this,” he said in a phone interview from Ethiopia. “It slowly got feet, and then it happened.”

And his friend Miller, whose running prowess has taken him throughout the world, is always up for an adventure.

He’d also been nursing an ankle injury, so he wasn’t running much — and the pandemic has curtailed a lot of racing anyway.

Witwer researched others’ trips and plotted the journey. He asked the family of Michelle Christiance, another college classmate, if he could camp at their home near the start of the trip. When Christiance, a photographer now living in Colorado heard about the idea, she said she’d like to join.

“I will never be able to look at the Susquehanna again the same way. It kind of beat me up and spit me out, but I love it."

None of the three had significant kayaking experience.

For one thing, Witwer was using a sit-atop kayak and it was slower and heavier than the sit-in models used by Christiance and Miller.

“By the time we got to the end, I was just happy to be done. I was exhausted. We were exhausted from day one,” he said. In a blog post on the trip, Witwer recalled waking up in the morning, his hands open from holding the paddle for hours and the excruciating pain of trying to make a fist.

“I was the weak link in the group,” he said, noting Miller’s physical fitness and that Christiance, while not an experienced kayaker, enjoys water activities.

“It was just an effort in finding my place and letting go of those big, macho stereotypes that I put out into the world,” Witwer said.

The trio paddled ten to 12 hours most days, often covering 25 to 30 miles.

Miller found the change in perspective from his usual activity interesting.

Among the highlights for Miller was paddling through the area he grew up near, he said.

Christiance said she was sad the trip ended as soon as it did.

“I remember thinking, ‘We only have eight days left?’ I’ve always loved the water so it felt like second nature once I learned how to paddle,” she said.

“We saw so much wildlife and learned about each other,” she said. A golden eagle chasing a duck. Probably 100 bald eagles. A river otter. Beavers. Turtles.

One highlight for Christiance: Because the river was so low, they spent many nights camping on grassy islands that normally would have been underwater.

Thankfully, the weather largely cooperated. They stayed with family and friends for seven nights, which enabled them to avoid camping on two of the trip’s three rainy nights (they rented a cabin for the third.)

They were able to carry their kayaks around most of the dams they encountered, except for the final three: Safe Harbor, Holtwood and Conowingo. For those, they called ahead and arranged rides with the dams’ operators.

Witwer echoed Christiance’s sentiment about learning more about something in one’s own backyard.

“For me, it became kind of an exploration of home,” he said, noting his family has lived in the area for generations — the first Witwer settled in Lancaster County in the 1700s.

“I will never be able to look at the Susquehanna again the same way. It kind of beat me up and spit me out, but I love it,” he said.