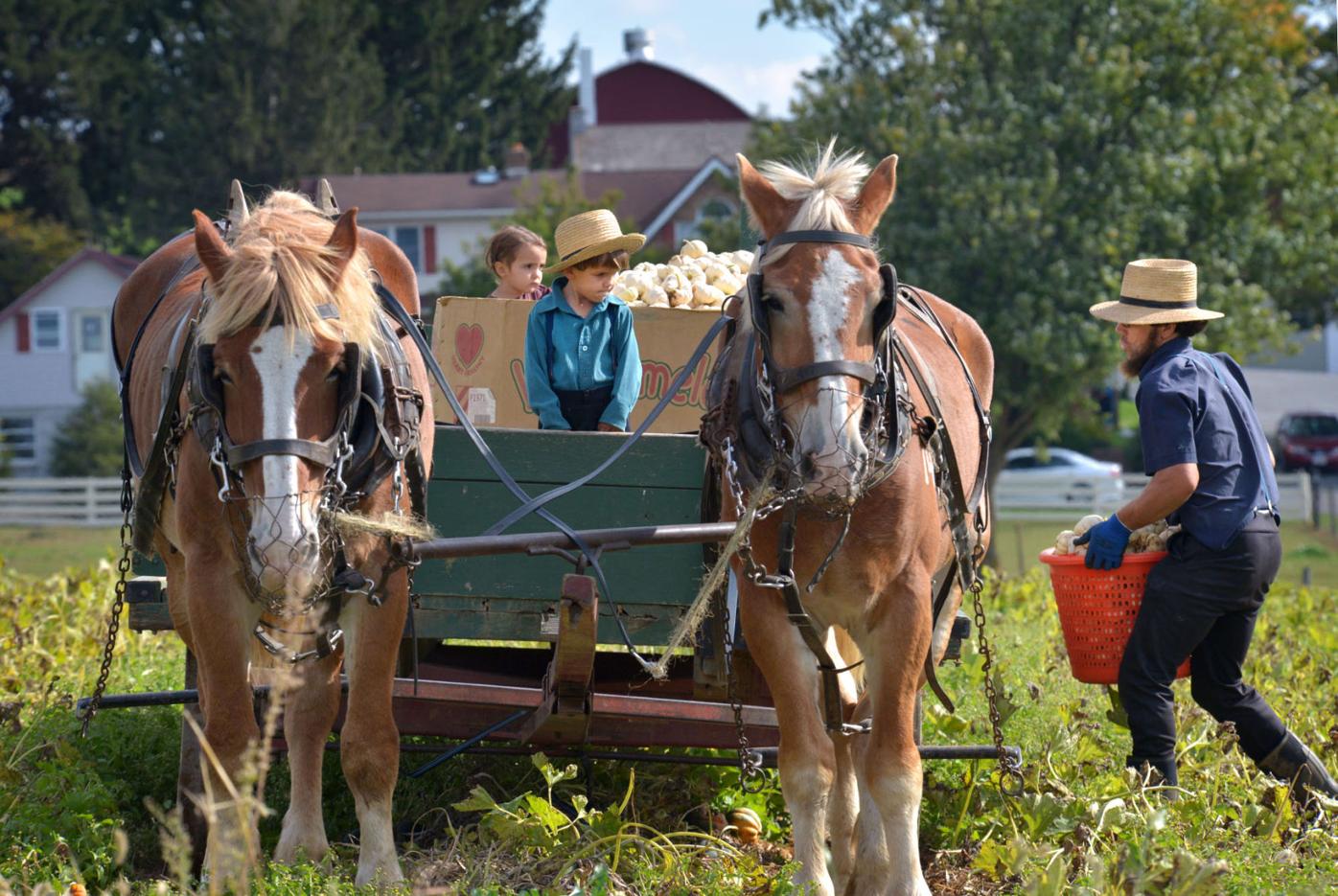 Amish children sit in a horse-drawn wagon near East Eby Road as their father loads small pumpkins in this 2015 photo.

Horse-drawn buggies in Lancaster County make up a funeral procession in October 2018. 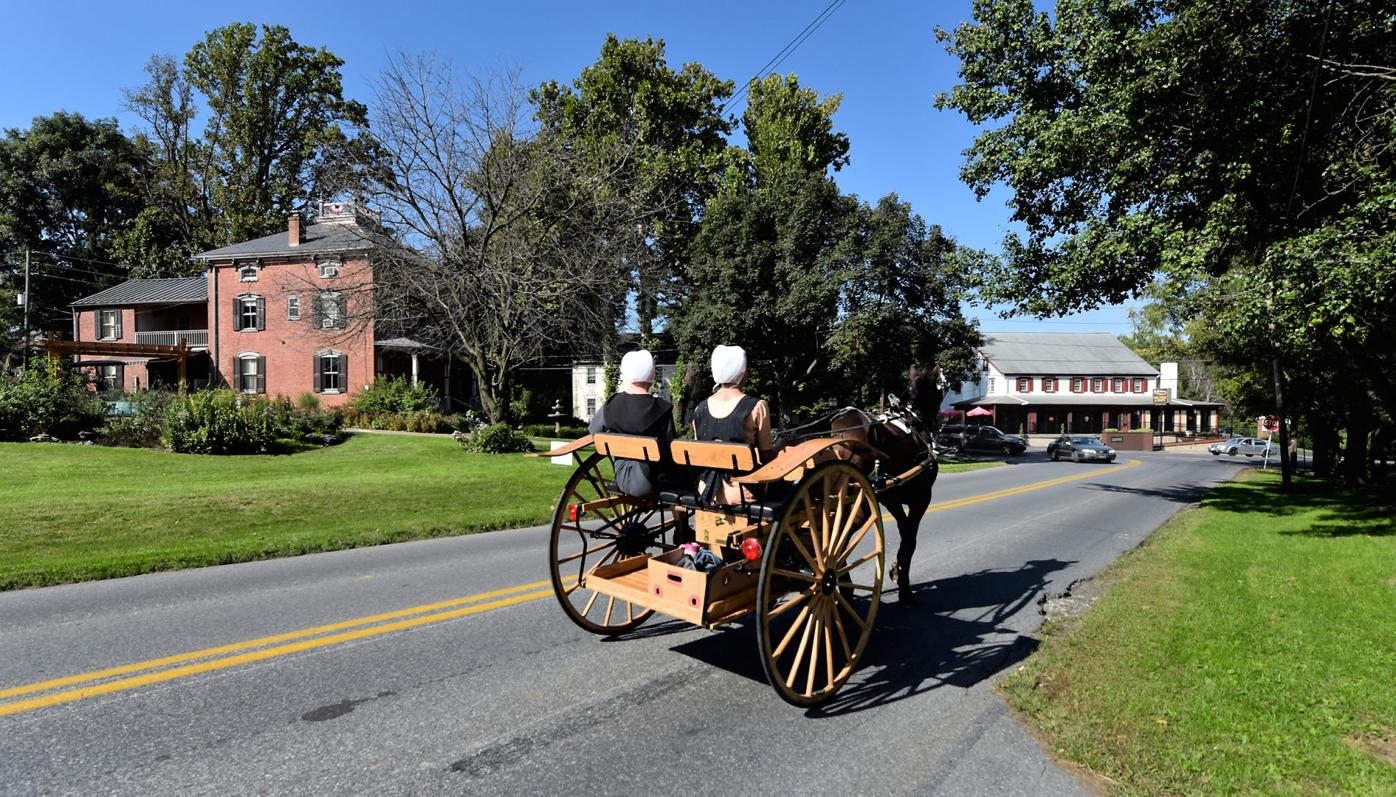 Lancaster County’s fast-growing Amish population recently exceeded the 33,000 mark as the farming-oriented Plain sect continues to flourish despite the encroachment of urban sprawl.

The Amish, who typically have large families and drive horse-drawn vehicles and farm equipment, are growing so strongly that they accounted for an estimated 41% of the county’s overall population growth last year.

The U.S. Census Bureau says the county added 2,503 people in 2018. Scholars who track the local Plain community say about 1,020 of them were Amish.

Lancaster County’s ability to accommodate the burgeoning Amish population has become an issue in Manheim Township, where the commissioners will soon decide whether to allow the development of a 75-acre housing and commercial project, called Oregon Village, in the midst of a thriving, centuries-old Amish community.

Lancaster County’s Amish population reached 33,143 in 2018, up 3.2%, from the previous year, according to Elizabethtown College researchers. Last year’s growth was typical of what’s happened in recent years.

Although some Amish families do leave Lancaster County, their population here doubles about every 20 years. In 1970, the Lancaster County portion of the local Amish settlement numbered about 7,000. That climbed to about 12,400 by 1990 and 16,900 by 2000. It has just about doubled since then.

At a hearing before the Manheim Township commissioners this week, Donald Kraybill, an authority on Amish culture and senior fellow emeritus at the Young Center, testified that there is a large Amish community in the vicinity of the village of Oregon, and some oppose the project, although they choose not to speak up out of a faith-based reluctance to participate in government.

Kraybill estimated that 1,200 Amish adults and children live within a 2-mile radius of Oregon. They consist of 246 households and belong to eight church districts in an area that stretches from Lancaster Airport, east of Route 501, to Leola, north of Route 23. Another four households are Old Order Mennonites who use horse and buggy.

Kraybill based his estimates on a church district directory and a map, prepared by the Geographic Information System division of the Lancaster County Information Technology Department. The map shows 44 parcels farmed by, but not all owned by, Amish and Older Order Mennonite farmers within a couple miles of Oregon.

Kraybill said members of the Amish community told him they are worried that the development, if built, would increase car and truck traffic on narrow back roads and add to the risks of operating slower-moving, horse-drawn vehicles.

Kraybill said heavy traffic is disruptive to Amish life. The Amish are highly social and rely on buggies and carriages to attend worship services, weddings, funerals and other activities in their tight-knit communities. Many children walk along back roads to attend the 11 one-room schools near Oregon.

Kraybill said that road safety issues could, over time, cause some Amish families to leave Manheim Township for more rural areas in or outside Lancaster County.

Take a drive through the rolling hills of southeastern York County these days, and you might…

Where would the Amish go if they leave Manheim Township? Steven Nolt, a history professor and senior scholar at the Young Center, said it’s hard to say for sure, but likely locations would be more rural, northern Lancaster County townships, such as Elizabeth, Penn and Rapho. Southern Lancaster County is another possibility.

For more on the Oregon Village development:

This summer, the Young Center for Anabaptist and Pietist Studies at Elizabethtown College will host a three-day conference on health and well-…

Here's a look at the most-read stories on LancasterOnline.com between April 22 and April 28.

Levi Stoltzfus Jr., a member of the Amish church who drives a horse-drawn buggy, recently failed to persuade his township to bend its rules an…

Rebecca Fisher sits in a cornfield, dressed in a simple yellow dress with a black apron over top.

“Whoa ... whoa,” the buggy driver said, stopping his horse on a country road where it meets Route 30, the main east-west highway in eastern La…

Sarah McClure's yearlong investigation on the widespread sexual abuse in Amish communities began with a phone call with a formerly Amish woman.