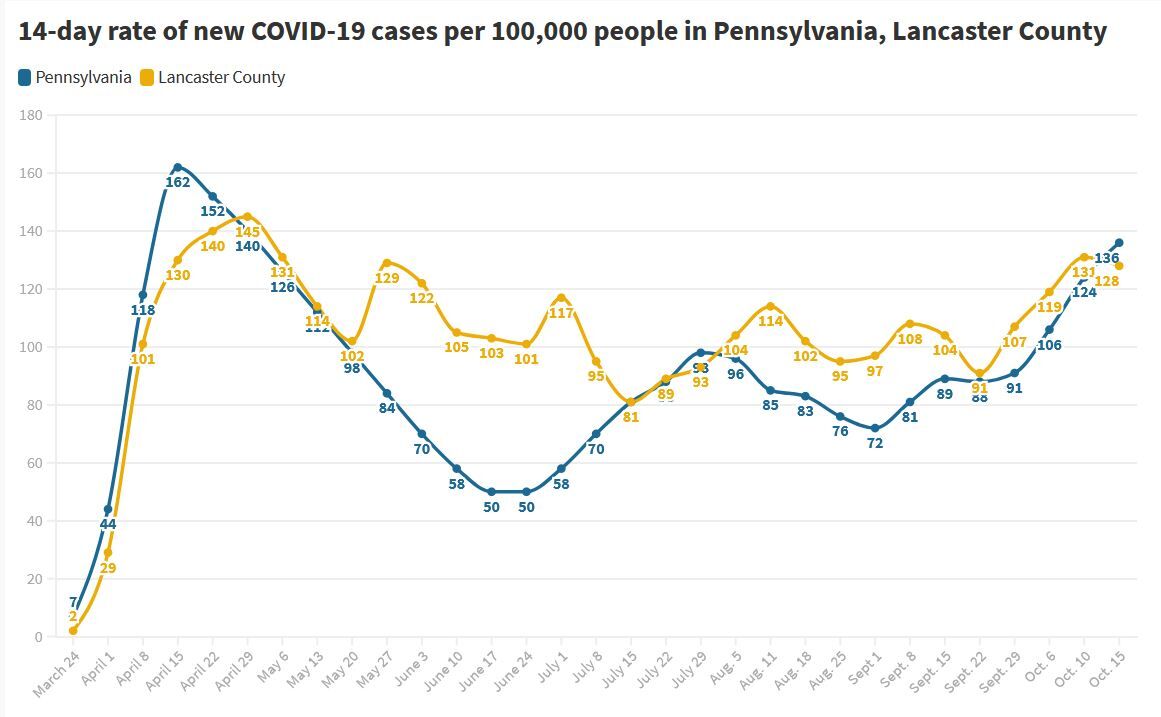 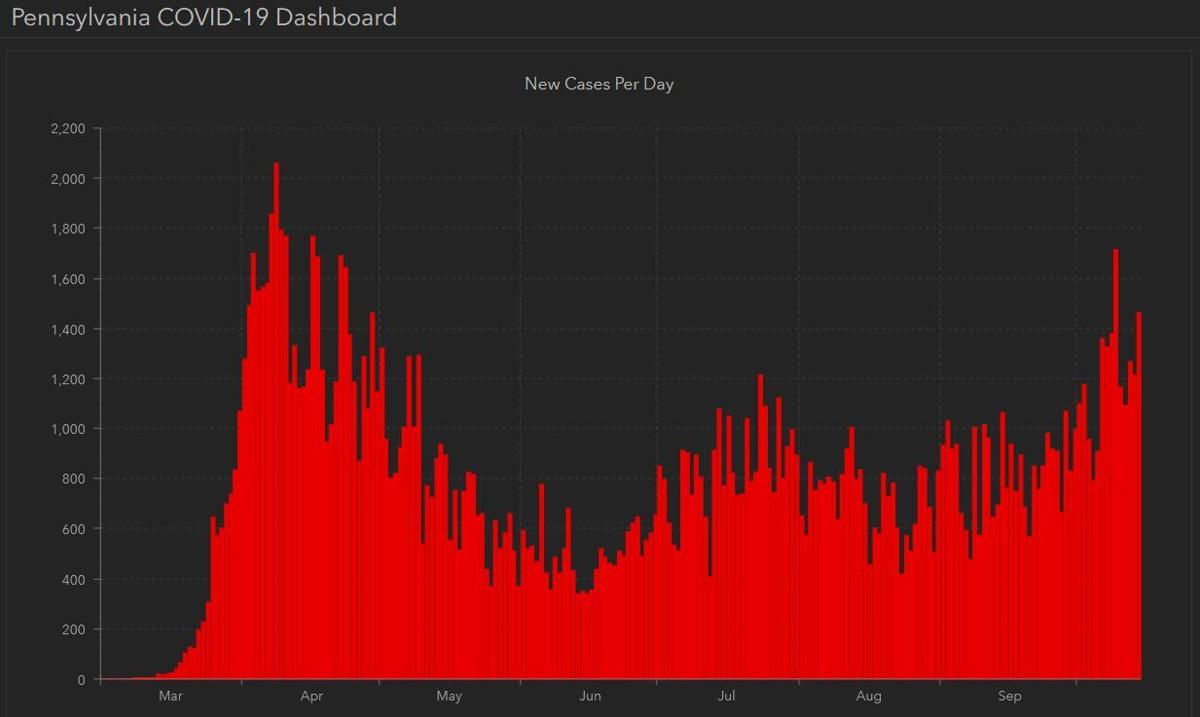 This chart from the state Department of Health's website shows the daily number of new coronavirus cases in Pennsylvania since March. 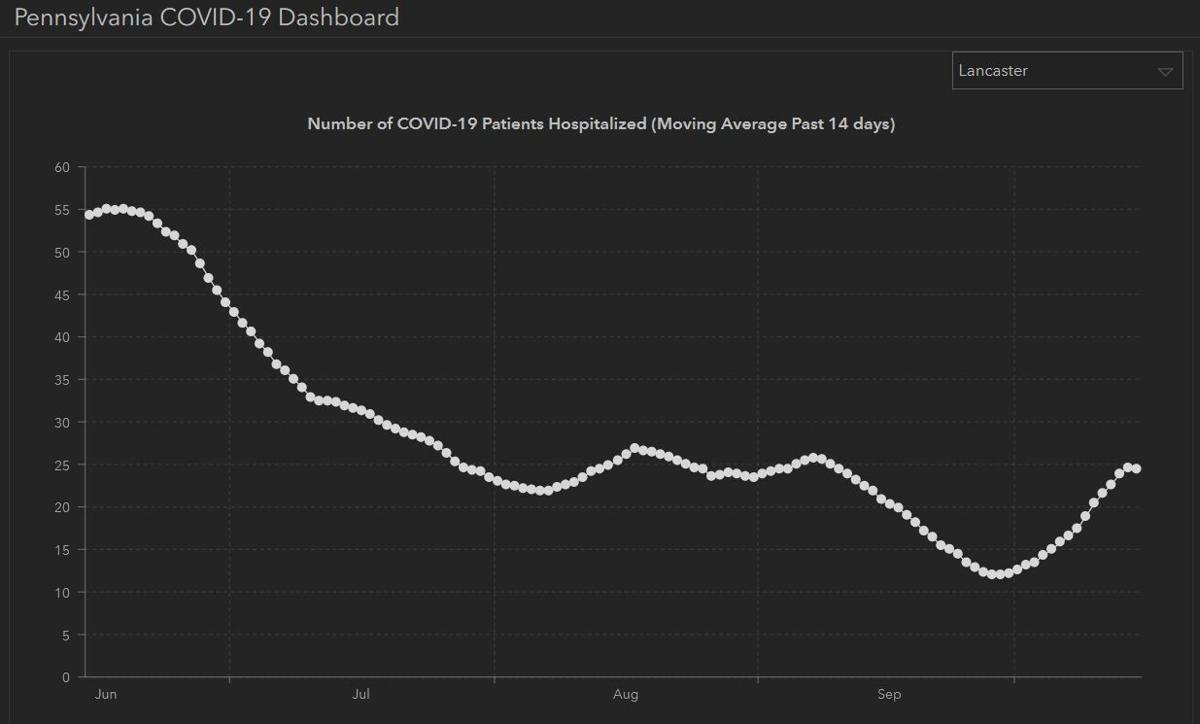 This chart from the state Department of Health's website shows the trend of COVID-19 hospitalizations in Lancaster County, Pennsylvania. 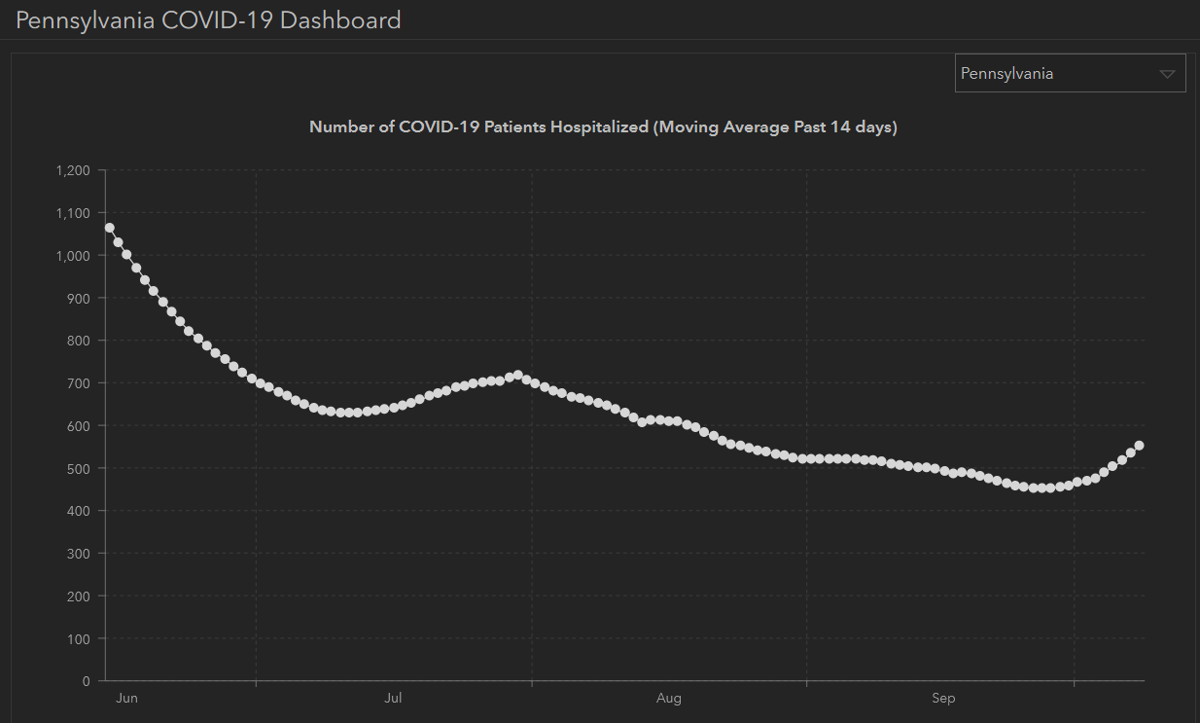 This chart from the state Department of Health's website shows the COVID-19 hospitalization trends in Pennsylvania since March.

Pennsylvania’s fall coronavirus surge continued this week, while Lancaster County showed some signs that its rise in new cases and hospitalizations might be easing a bit, at least temporarily.

The county’s per-capita rate of new COVID-19 cases was eclipsed by the statewide rate for the first time since late July, and the number of patients hospitalized here declined two days in a row.

Statewide, the Department of Health reported another 1,598 new COVID-19 cases on Thursday, its second-highest daily number since April. The state’s 14-day per-capita rate of new cases rose to 136 per 100,000 population, its highest level since May 1.

Average daily hospitalizations climbed to 680 statewide, up 50% from the low point of 452 a little over two weeks ago. The 14-day count of COVID-19 deaths hit 272 Thursday, its highest since Aug 19.

In Lancaster County, meanwhile, the new case rate has eased a bit since the county set a new one-day record of 104 new cases on Saturday.

Thursday also marked the first time in 16 days that the county did not see an increase in its 14-day daily average number of patients. In a little over two weeks, that number had doubled from 12 on Sept. 29 to 24.6 on Wednesday. It was 24.5 on Thursday.

Lancaster County’s coroner, Dr. Stephen Diamantoni, has reported 10 COVID-19 deaths here so far in October —a pace that threatens to eclipse September’s total of 13, which was down from 29 in August.

The last COVID-19 death reported here was on Tuesday.

Lancaster Dispensing Company will be closed until further notice after an employee tested positive for COVID-19 Friday.

Hospitalizations of COVID-19 patients continue to climb in Pennsylvania as the state’s fall coronavirus surge shows little sign of slowing down.