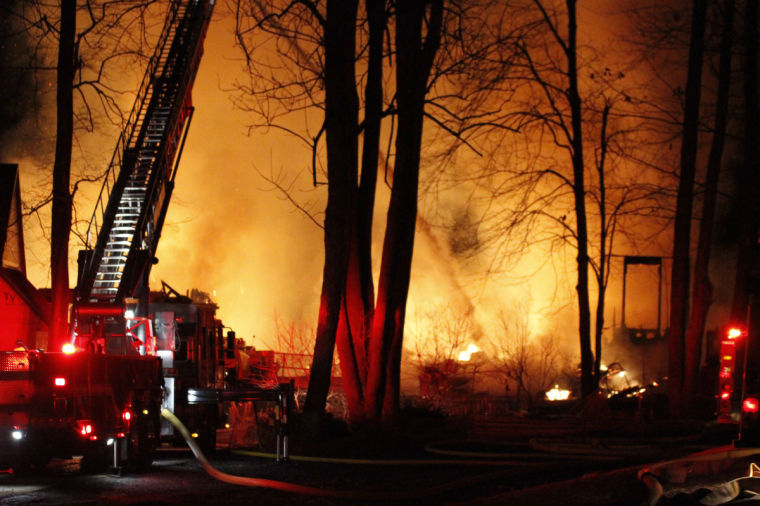 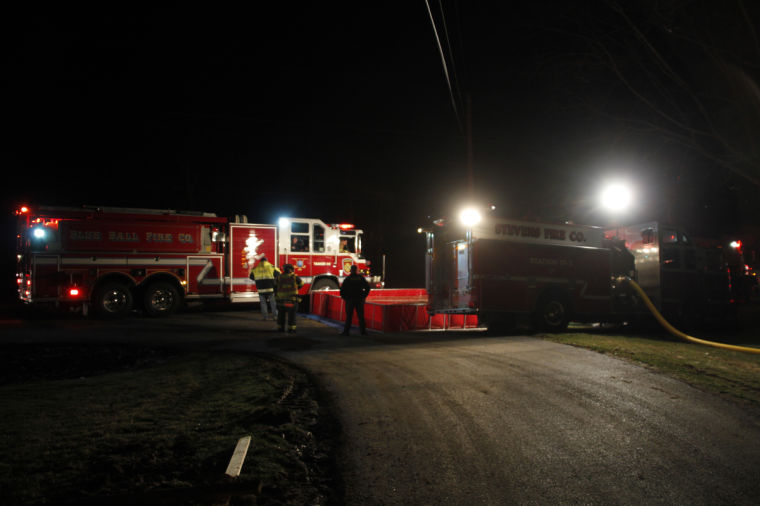 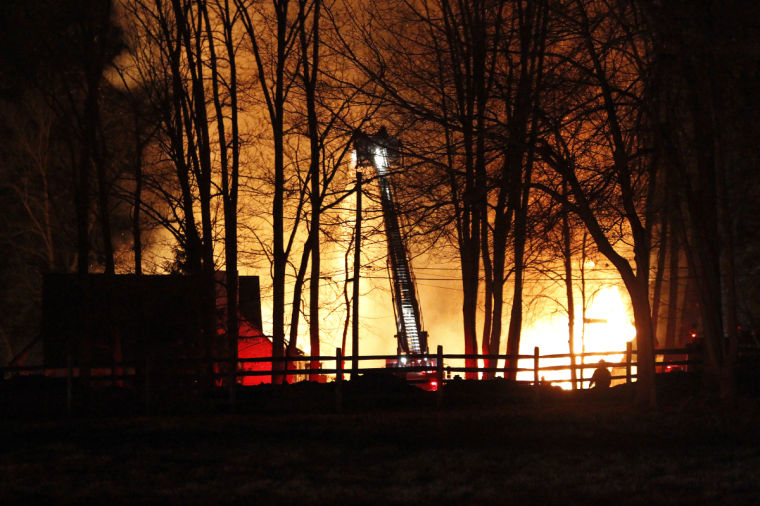 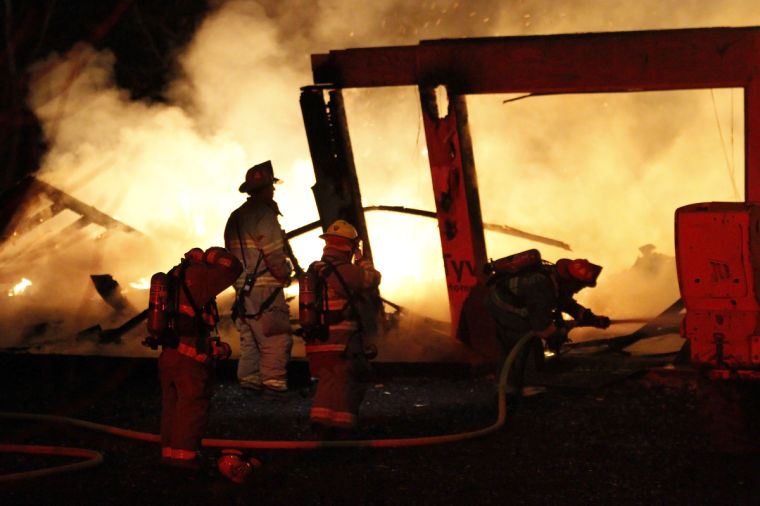 Firefighters work to extinguish a 2-alarm fire that destroyed a house under construction in East Cocalico Township early Thursday morning. 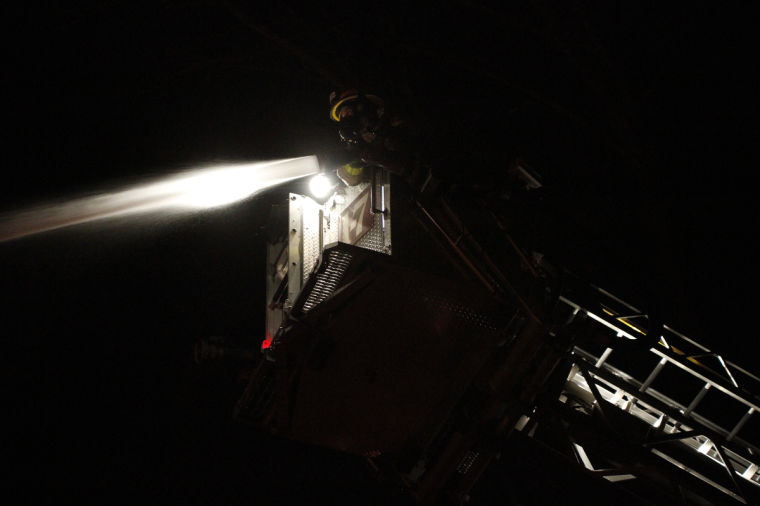 A firefighter battles a 2-alarm blaze that destroyed a house under construction in East Cocalico Township early Thursday morning. 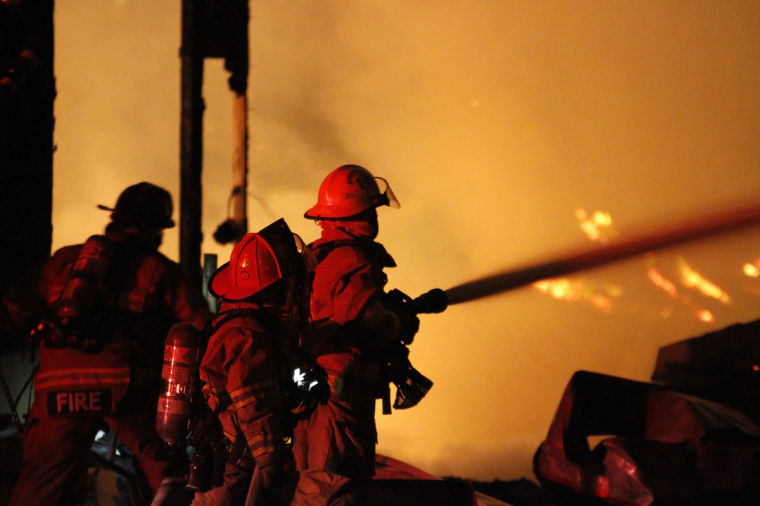 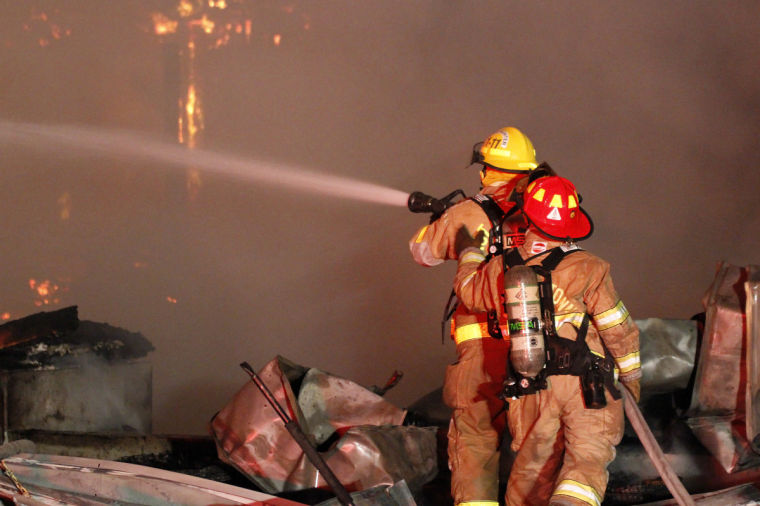 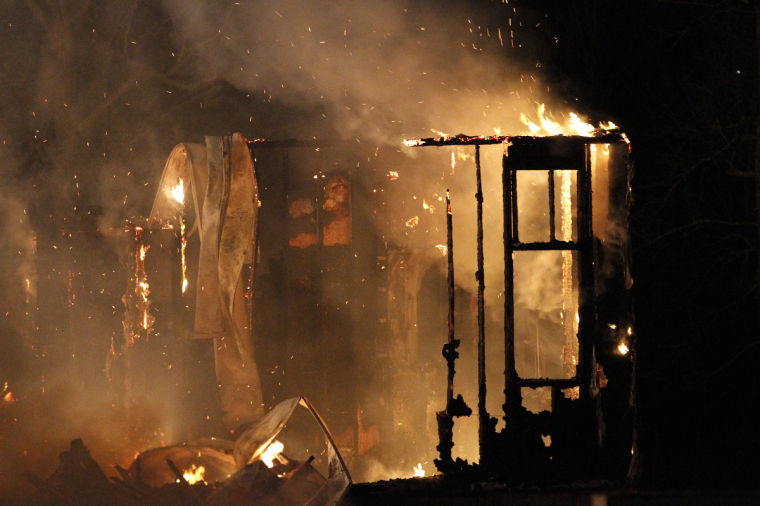 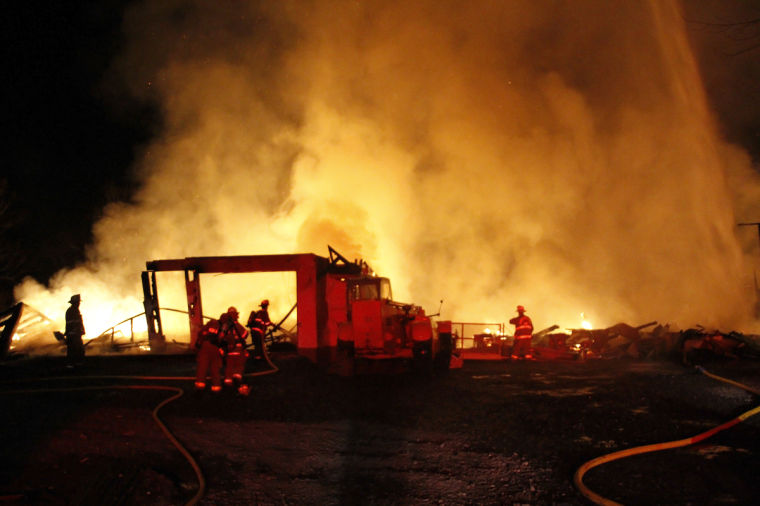 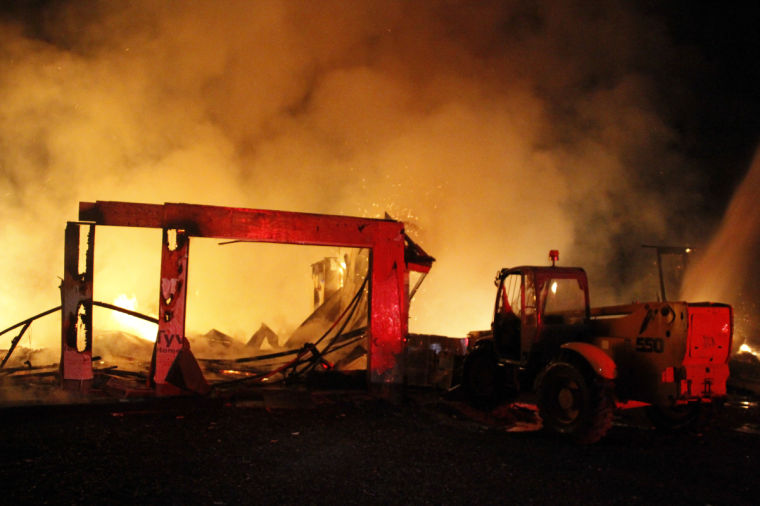 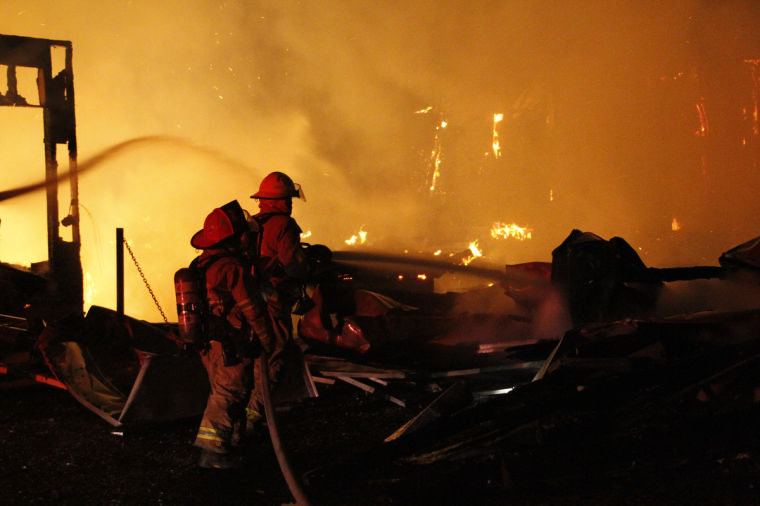 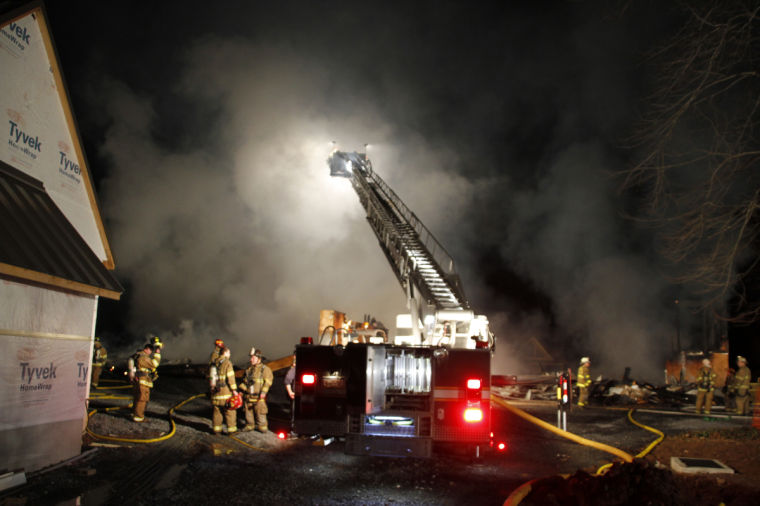 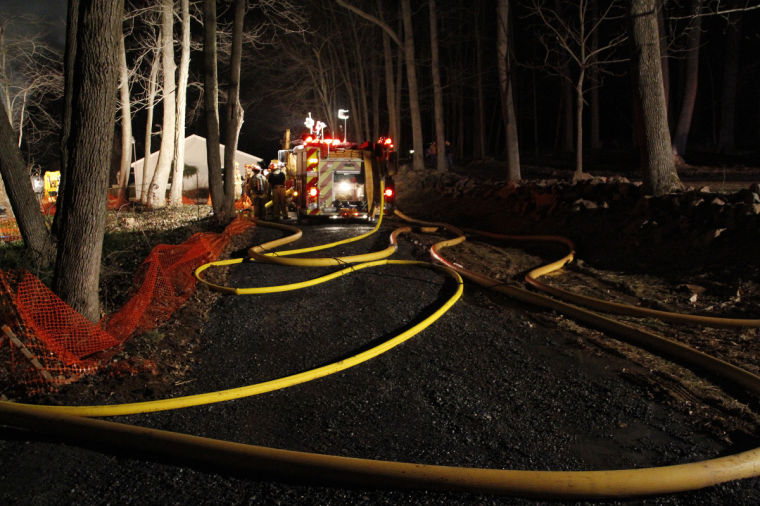 Hoses snake along a road near the 2-alarm blaze that destroyed a home in East Cocalico Township early Thursday morning.

Firefighters work to extinguish a 2-alarm fire that destroyed a house under construction in East Cocalico Township early Thursday morning.

A firefighter battles a 2-alarm blaze that destroyed a house under construction in East Cocalico Township early Thursday morning.

Hoses snake along a road near the 2-alarm blaze that destroyed a home in East Cocalico Township early Thursday morning.

The owner/founder of Four Seasons Produce, David Hollinger, and his wife, Debbie, had planned to move into the largely-finished, 6,600-square-foot home in September.

They called and alerted their parents, who have been living in a cottage on the same property while their new home was being built.

“I looked out our window and saw the biggest bonfire you can imagine,” David Hollinger, 62, said.

“We were sound asleep and just didn’t hear it,” Mrs. Hollinger said. “It was incredible, shocking. I knew no one was in there, so that doesn’t let the stress level go too high.”

The home was back a long lane and burned for some time before anyone noticed, Smokestown Fire Chief Brian Auker said.

Flames filled the structure by the time firefighters arrived so they mounted a defensive, “surround-and-ground” exterior attack.

Early in the effort, the home partially broke apart and collapsed, he said.

The chief at 3:41 a.m. called for a second alarm for more tankers and manpower.

About 75 firefighters fought the blaze, Auker said. None were injured.

At least one apparatus got stuck in the saturated ground, he said. A trench dug next to the lane also limited firefighters’ options.

The wet ground helped prevent the fire from spreading to any brush, Auker said. Flames spreading to trees also was not a concern because no trees were directly next to the house.

Firefighters protected a brand new detached garage near the home from damage, Auker said. Some construction vehicles near the home suffered minor damage from the extreme heat.

Firefighters brought the fire under control shortly before 5 a.m., Auker said. White Oak Road was reopened to traffic at around 7:30 a.m.

The cause of the fire has not been determined, said Trooper Dustin Shireman, a state police fire marshal.

“The house burnt into the basement,” Shireman said. “The cause may never be known, but we will try. There is nothing suspicious at this point.

He did not know where the fire started.

Mrs. Hollinger said she couldn’t imagine what may have caused a fire.

Her husband said he wonders if a space heater used by workers in the home may have sparked the blaze.

Damage to the home was estimated at $1 million, Auker and Shireman said.

Most of the home had been finished and drywall was being added, Mr. Hollinger said. Heating and air-conditioning equipment were in the home, but not appliances.

The home’s builder does have insurance on the home, Shireman said.

The house would have been an eye-opener. The first and second floors had 6,600 square feet.

The basement would have served as an apartment for short-term stays.

“It was going to be for us to enjoy and our family,” Mr. Hollinger said. The couple has two children and nine grandchildren.

“We always have done a lot of entertaining, so the home was large to accommodate that,” his wife said.

“I would not call it a dream house,” Mrs. Hollinger said. “We are not attached to possessions, so we hold it lightly.”

The couple also houses missionaries from time to time, and occasionally others who need a temporary place to stay, they said.

The former house at the site was in desperate need of repair, requiring large expenses such as a new roof and heating/air-condition system.

The couple decided instead to demolish it and build a new home that would better suit their needs, they said.

The Hollingers moved into a one-bedroom cottage last summer.

They expected to move into their new home in September, but now that will have to wait at least a year. A disappointment, but not a hardship.

“We’ll rebuild at the same site, the same plan,” Mr. Hollinger vowed. “The house is a blessing to us and our family, and also many other people. It is an extension of us.”

Mr. Hollinger said he felt bad for the general contractor, Haller Builders, of Ephrata, and various subcontractors who had planned their work schedules this spring and summer.

A call to Haller Builders was not immediately returned for comment.

Mrs. Hollinger on Thursday kept the loss of property in perspective.

“Some people would be devastated,” she said. “It’s wood and wood can be  replaced. People can never be. Anyone who has lost a loved one (in a fire), I can’t imagine.”

David Hollinger said it was the fourth time he has had to deal with a major fire in his lifetime.

Ryan Robinson is a police reporter andÂ VoicesÂ columnist for Lancaster Newspapers. He can be reached atÂ rrobinson@lnpnews.comÂ or (717) 481-6032. You can also follow@RyanRobinsonLNPÂ on Twitter.