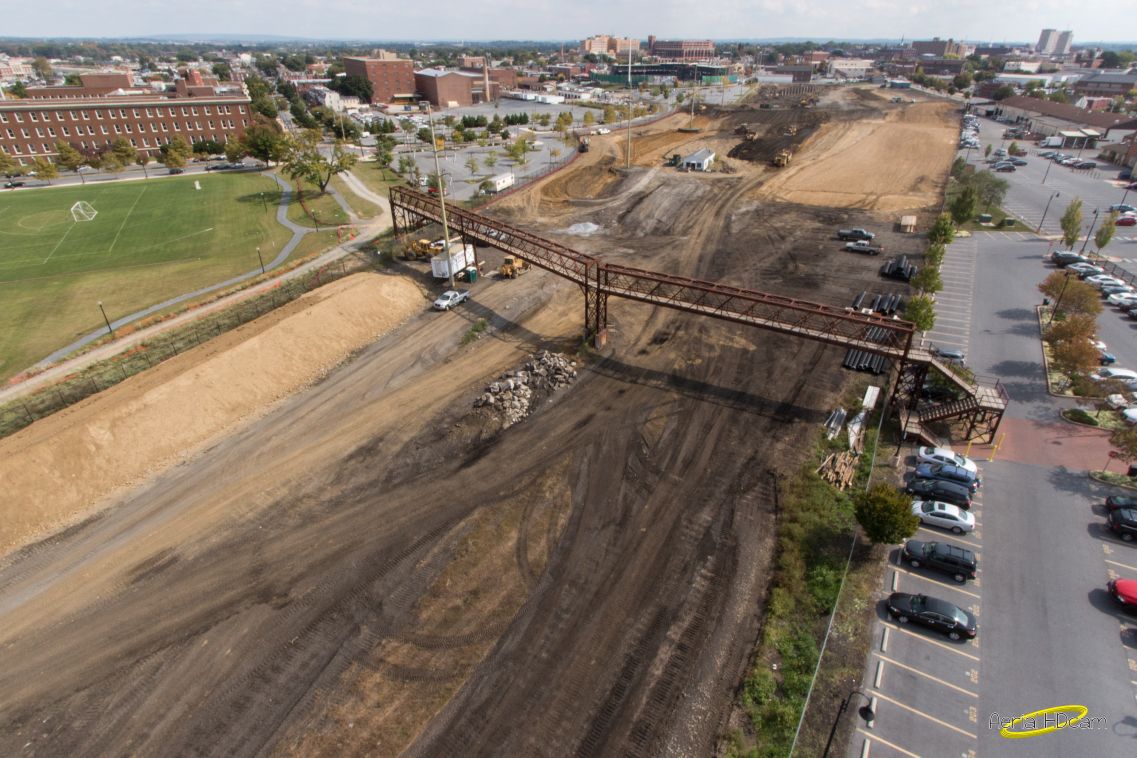 An aerial photo showing the pedestrian bridge and grading at the former rail yard in Lancaster. 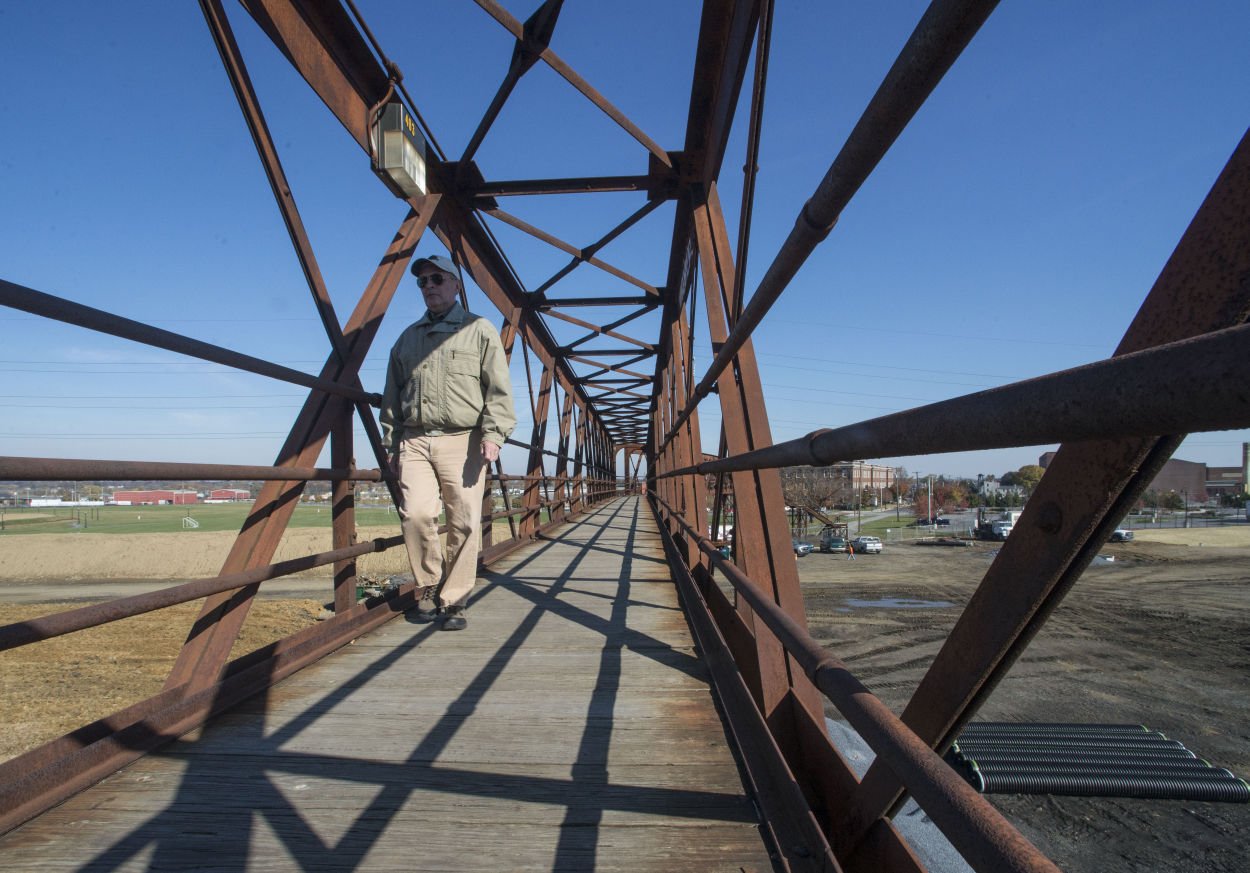 Jim Mackey, of Lancaster, uses the footbridge that connects Liberty Place to the Franklin & Marshall College campus Monday morning. The bridge crosses the former railyard and may be moved to a new home in 2015. 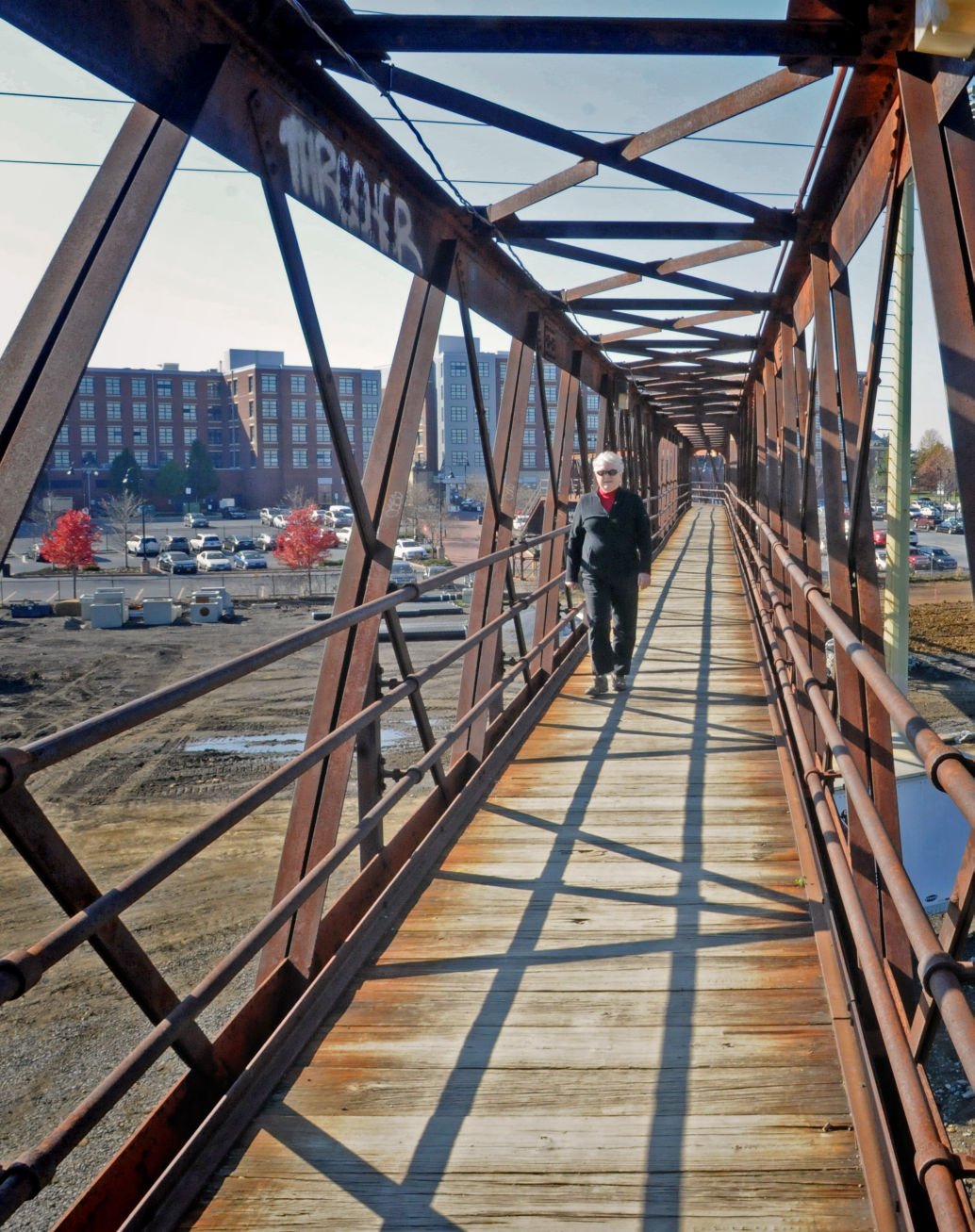 Joanne Stephan, of Lancaster, crosses the footbridge that crosses the former rail yard behind the Franklin & Marshall College campus, north of Harrisburg Avenue. 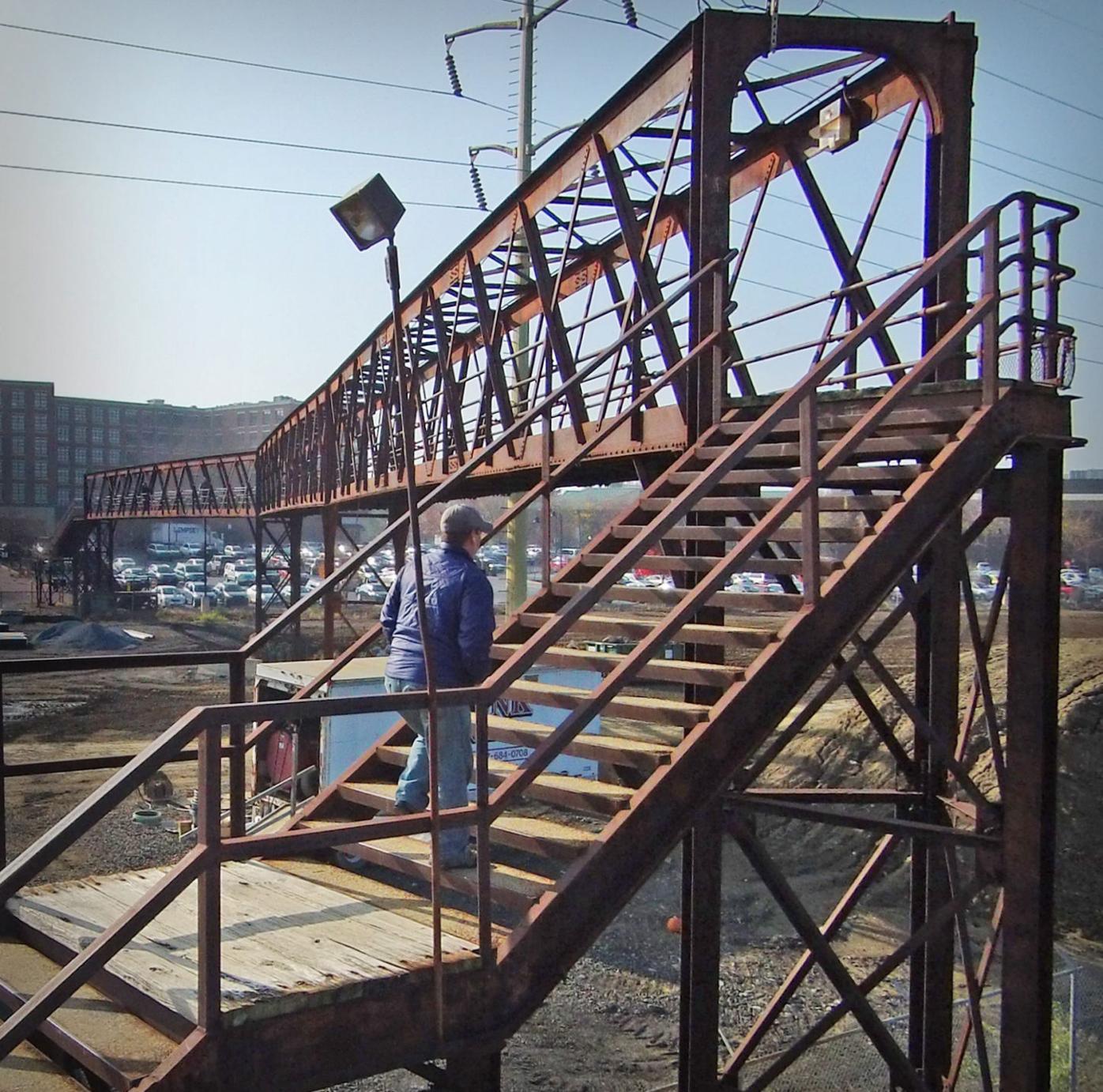 An aerial photo showing the pedestrian bridge and grading at the former rail yard in Lancaster.

Jim Mackey, of Lancaster, uses the footbridge that connects Liberty Place to the Franklin & Marshall College campus Monday morning. The bridge crosses the former railyard and may be moved to a new home in 2015.

Joanne Stephan, of Lancaster, crosses the footbridge that crosses the former rail yard behind the Franklin & Marshall College campus, north of Harrisburg Avenue.

Generations of Armstrong flooring plant workers, lunch pails in hand, scrambled up the steps of the metal bridge and walked to their shifts over the trains below.

Today, Franklin & Marshall students use the rusting span, nearly as long as a football field, to get to athletic and recreation fields on the huge expanse of green grass.

Now that the Norfolk Southern rail yard has been relocated as part of the $75 million Northwest Gateway reclamation project, there soon will be no need to walk over anything.

So, the “rail yard bridge,” a landmark off of Harrisburg Avenue for many Lancastrians for 92 years, is coming down.

But it will go back up.

If weather cooperates, all three sections of the 280-foot-long bridge will be removed by the Lancaster County Solid Waste Management Authority in the spring.

But that removal will just be the beginning of the bridge’s journey. The waste authority has hired a consultant to help restore the bridge.

It will then be put back into use, possibly on the final northern section of the Northwest Lancaster County River Trail in Conoy Township or to carry trail users across Little Conestoga Creek on the authority’s own Farmingdale Trail in East Hempfield Township.

“While we’re still in the investigation phase, LCSWMA intends to preserve and honor the history of the bridge by returning it to the community it served for decades,” said Katie Sandoe, authority spokeswoman.

“We want people to enjoy this iconic structure for many more years to come.”

The authority volunteered to accept the bridge, Sandoe said, to extend its partnership with F&M and Lancaster General Health as part of the relocation of the rail yard.

“The college has a great deal of emphasis on sustainability and if the current pedestrian bridge can be put to a further extended use in a way to help the residents of Lancaster County, it’s great,” said Kevin Burke, F&M spokesman.

Lancaster General Health’s John Lines said, “We’re pleased that they are interested in finding a home for the bridge so it can be used for the public good.”

Some have a soft spot in their hearts for the bridge.

“That bridge, like the (Armstrong) plant, was a part of the lives of thousands of men and women who worked there,” Patrick Weidinger of Lancaster wrote in a letter to the editor after a LNP story in 2006 about the orphaned bridge.

In another letter, Janelle Paules of East Petersburg said it was her favorite bridge in Lancaster.

“All I see is a beautiful and historic piece of mastery. The striking, rusted-steel structure — in  intricate cross pattern surrounding the stressed, yellow-wood planks showing many years of use — sits in a beautiful landscape of an open blue sky. Showing through are the industrial days of Lancaster County on either side.”

The bridge was built in 1922 by the former Pennsylvania Railroad and Reading & Columbia Railroad. Apparently its main use was to give Armstrong workers safe passage while getting from parking lots to the plant.

For many years, Armstrong maintained the bridge. In the early 1980s, Armstrong, F&M, Lancaster city, the School District of Lancaster and others sued Conrail over maintenance of the span. A Pennsylvania Public Utility Commission administrative law judge ruled that Conrail was responsible for its maintenance.

But in the 1990s, when Norfolk Southern bought much of Conrail’s assets, it denied ownership, leading to years of finger pointing over who should maintain it.

The bridge is no longer needed as the decade-long Northwest Gateway “brownfield” project nears completion of its fourth of five phases. The project involves 77 acres formerly owned by Norfolk Southern and Armstrong.

The railroad tracks and infrastructure have been removed  and the area smoothed flat on a 28-acre portion. A search for any environmental pollution is nearing completion with nothing amiss, Lines said.

Also, Liberty Street will be extended to College Avenue.

The property, which stretches from Clipper Magazine Stadium almost to Dillerville Road, is currently owned by the Economic Development Company of Lancaster County.

But the land will be used by F&M and Lancaster General Health.

Its first use may be the erection of F&M’s new Shadek Stadium sports complex. No construction date has been set.

Lancaster General’s Lines said its use of some of the property is more long-term and that there are no current plans.

“It could be a mix of offices, education and medical use,” he observed.