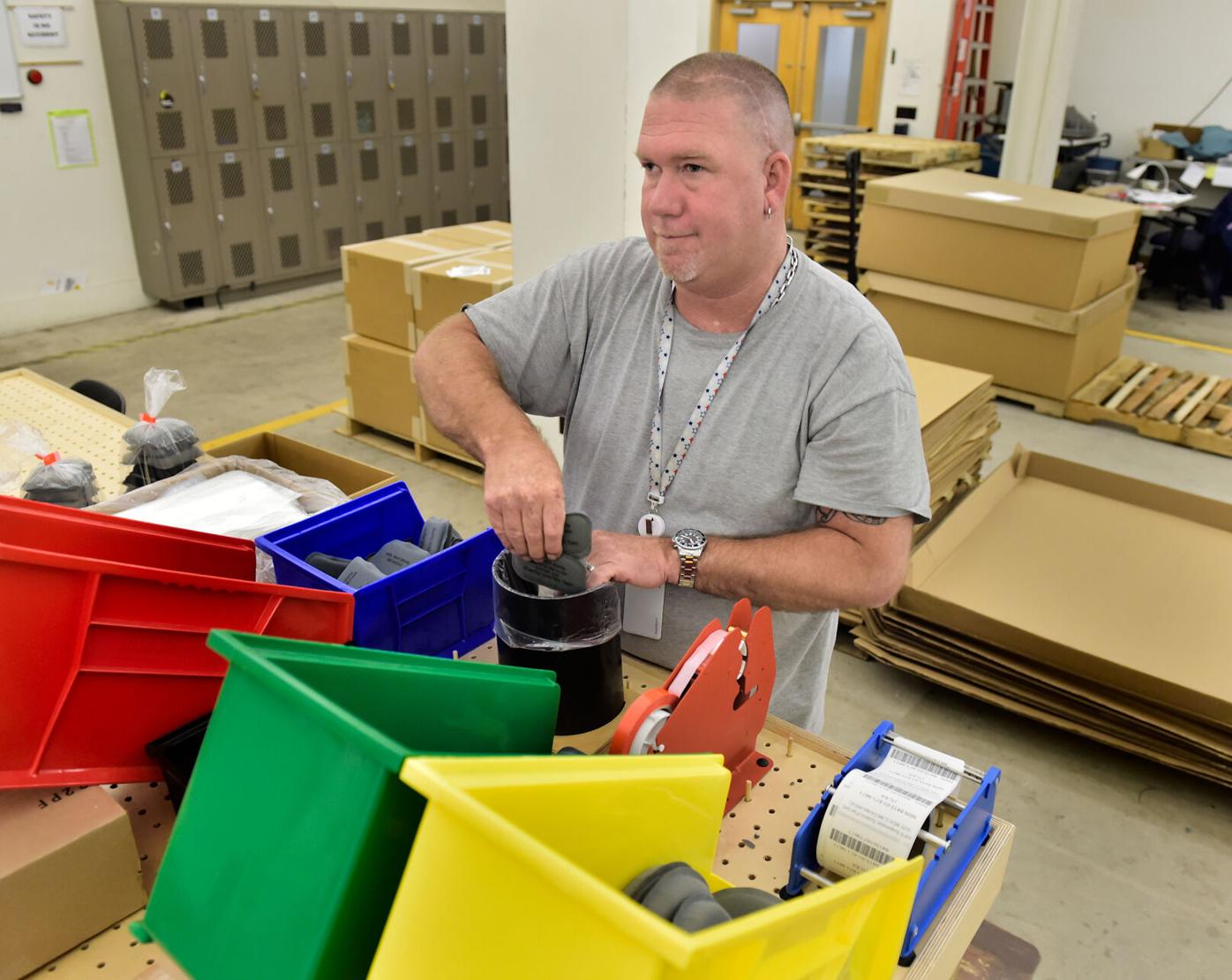 Jesse Miller places helmet pads to be packaged at VisionCorps. Miller, legally blind since 2018, currently employed at VisionCorps where he works with chemical containers or cutting helmet pads for the military, learned how to do these tasks without sight as part of his training through VisionCorps on Friday, June 4, 2021. 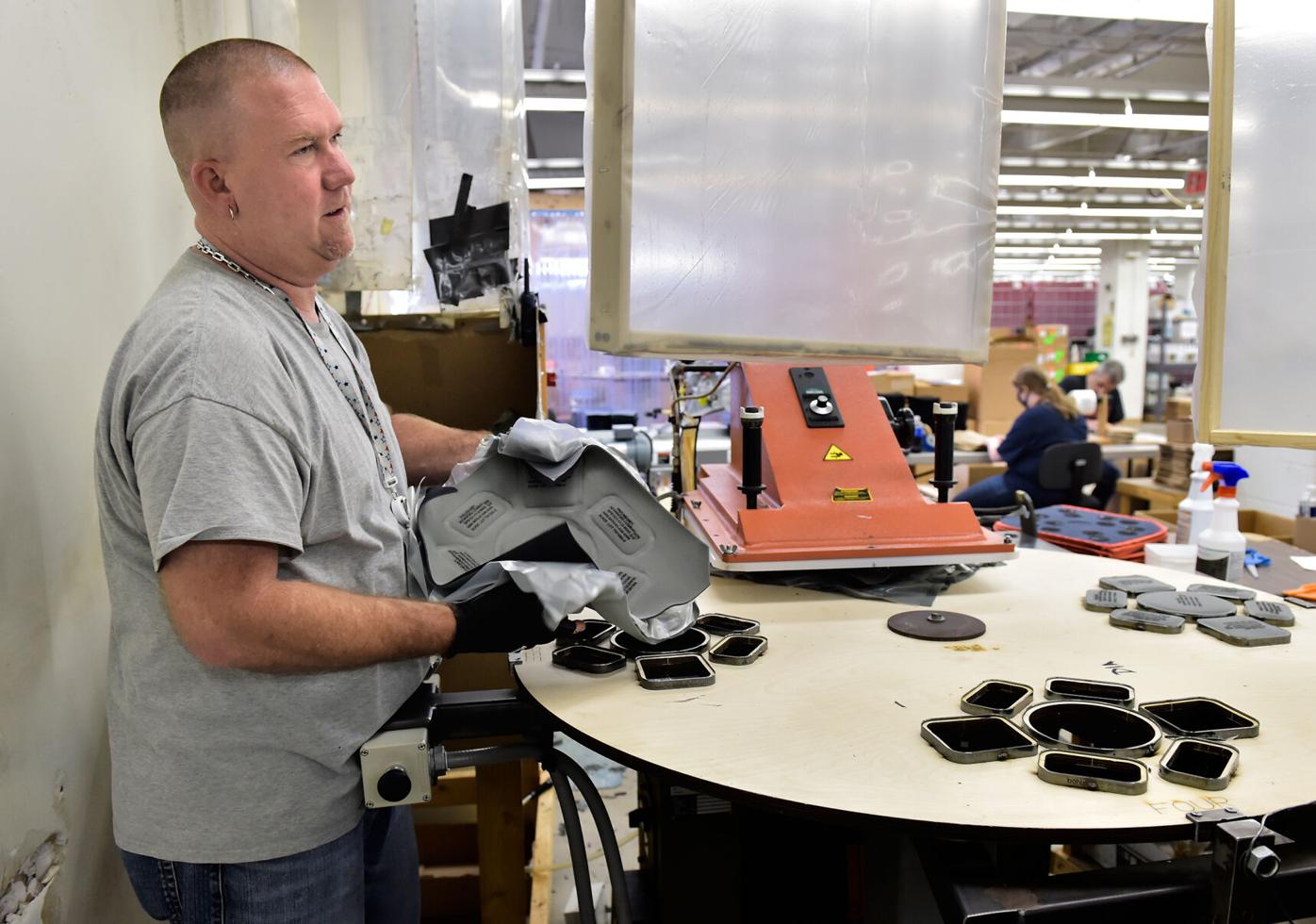 Jesse Miller, legally blind since 2018, currently employed at VisionCorps where he works with chemical containers or cutting helmet pads for the military. He learned how to do these tasks without sight as part of his training through VisionCorps on Friday, June 4, 2021. Miller lost the use of one eye at the age of 12 due to a Benign meningioma and lost the use of his other eye after a stroke in his eye.

Jesse Miller woke up unable to see anything.

“My mind was racing,” the Millersville resident said, adding that he was thinking, “I hope this isn't for the rest of my life. I need help.”

Out of habit he reached out for his cellphone. He remembered where it was on the nightstand, but once it was in his hand, he realized he couldn’t see the screen to make any calls.

He got up and traced his steps through the hotel, making his way down to the reception desk, the layout familiar enough after 15 years of work trips that required overnight stays in similar buildings. At the desk he got help calling his fiancé.

“I was so scared,” he remembered.

Miller’s not scared any more, however. Less than three years after abruptly and unexpectedly losing his sight permanently, the 44-year-old has reestablished a full life. On July 9 he will once again give back to a Lancaster-based nonprofit that has been key in that life journey, VisionCorps. To raise money for the organization he will rappel down the 10-story Holiday Inn Lancaster, marking the second time he’s rappelled to aid others who face the challenges he’s experienced.

In some ways, the July 9 event brings Miller full circle, back to the days before he woke up scared in that hotel room.

Waking up to a new life

Miller often traveled up and down the eastern seaboard as a millwright, welding and fitting pipes, sometimes from great heights, for a construction company.

On Oct. 17, 2018, he and his coworkers were just starting work at a soybean refinery in Danville. Mid-morning, when his right eye began to feel strained, he and his coworkers assumed it was welder’s flash – a burning sensation from welding long hours at a time. After an early lunch, a coworker drove him back to the Comfort Suites hotel, where he went to sleep. When he awoke, he had lost the sight of his right eye— his left eye had been blind since he was 12 due to a case of benign meningioma.

With the help of an alarmed receptionist, Miller contacted his fiancé, Stacy Deutsch, who was at home in Millersville with their four daughters.

At that point, he was in a waiting game. No one was available to transport him until the next morning, when another employee could pick him up.

“I could barely sleep,” he said. “I was frustrated, you know, I figured it was the best thing to try to do …   just relax and everything will be better when I woke up.”

But that was not to be.

A series of doctor visits, revealed Miller had suffered a stroke in his right eye— it wasn’t welder’s flash. By the time he sought treatment, there was nothing that could be done to restore his vision. Miller was blind.

He began collecting disability benefits and working through everyday struggles of learning how to walk, work and interact without sight.

Three months into this new life Miller was growing increasingly frustrated. One day all he wanted to do was take out the trash by himself.

“I thought it was just that easy and simple just to take the trash out to the grass and come right back in,” he said. But it wasn’t. Miller crossed the street and walked into his neighbor’s yard.

“I got lost,” he said. “I was screaming and yelling.” His neighbor came out to help him home.

In that moment, Miller knew he needed help to regain independence. His aunt, Kathy Shaub, had connected him with VisionCorps in January 2019 but he had skipped appointments.

“He’s always of the mind that he doesn't want to take any handouts from anyone,” she said. “He doesn't want anyone to feel sorry for him.”

VisionCorps offered the help he needed. Right away, Miller worked on mobility with a VisionCorps trainer to understand how sound and touch are used to navigate. He learned how to walk down the street, cross the street and use landmarks for location.

“He was in mourning,” said Sue Miller, a social services case manager at VisionCorps. “He wasn’t feeling like he was an important part of society anymore.”

In spite of the challenges that come with sudden vision loss, Jennifer Eaton, a VisionCorps certified orientation and mobility specialist, said Miller is motivated and a quick learner. It’s common to reach a point of frustration in relearning mobility, but Miller takes it in stride.

Today, as Miller steps out for a walk, he accepts help from his family but they normally linger behind “just to make sure I don’t go out on the road or something.”

Improvements due to VisionCorps’ help gave Miller a renewed sense of independence and confidence. A few weeks ago, for the first time, he travelled alone by plane to Florida.

“He's not afraid to try new experiences,” said Shaub. “He learned some things the hard way, but he’s not afraid to go do that and his attitude has got really good. I'm just so proud of him that he's come this far.”

Much of this he credits to his time with Eaton and Miller through VisionCorps. The nonprofit administers training and assistance for no cost. VisionCorps doesn’t even ask for insurance, Miller said. That’s a big reason why the VisionCorps Eye Drop fundraiser, this year set for July 9 at Holiday Inn Lancaster, is so important to him.

“They made me feel independent, made me feel like a person again,” Miller said, adding that all training was done when and where he wanted. “They never asked for a dime.”

Less than a year after his stroke, VisionCorps employed Miller in its manufacturing department. VisionCorps specializes in manufacturing, food processing and administrative services for the public and private sector. Out of 150 employees, 75% are visually impaired or blind.

Miller discovered this part of the organization when he visited the Lancaster office for training one day. As he passed through noises of sewing machines and other machinery, his interest was piqued. What could that possibly have to do with assisting the visually impaired? Soon enough, his trainer helped him fill out an application.

Lately, Miller clocks into a workday with the task of cutting cushion pads for military helmets purchased by the Defense Logistics Agency. Other days he has worked on the chemical preparation line, inspecting sanitation bottles for dents or holes before others fill, label and package them.

When Miller’s not working, he’s been learning Braille and getting outdoors as much as possible. A year ago, he kayaked for the first time with Eaton’s help.

He’s also committed to giving back to the organization that has given him so much.

In addition to his fundraising contributions, Miller goes out of his way to help fellow VisionCorps clients.

“He’s a big brother to everybody,” Eaton said, adding that most recently Miller took the time to demonstrate to a new client how he uses his iPhone. iPhones are an important tool in helping the visually impaired navigate. In fact, iPhone was the first smartphone to include a full set of accessibility features for the visually impaired, including a screen reader and Siri. Miller received his iPhone from the Millersville Lion’s Club in 2019.

At home, Miller has the unwavering support of his daughters. While his eldest daughter, Aimsley Showstaff, 21, lives by State College, his younger daughters, Jade, Bethanie and Kristin Deutsch, – 15, 17 and 19 respectively – live at home with him and his fiancé.

Sometimes, they cover their eyes with bandanas to better understand the experience of being blind. Deutsch came up with the idea so they could do tasks like getting to the front door or grabbing a spoon from the kitchen without their vision.

“It opened their eyes to how it would be to become blind and see how his other senses and help from others come into play,” Deutsch said. “They help when he needs help and try to make things easier for him.”

Editor's note: These stories were originally published near the beginning of April. Informat…

Lancaster County’s nonprofit organizations are being impacted heavily by the coronavirus pandemic.

You can donate to the general campaign, find other fundraisers or even sign up to rappel at give.visioncorps.net/event/visioncorps-eye-drop-2021/e259831.

All donations will be matched by the VisionCorps and VisionCorps Foundation board members through June 23 at noon. The boards have pledged $13,000 to match donations.

To support Jesse Miller and others rappelling in the VisionCorps Eye Drop fundraiser, watch from the bottom of Holiday Inn at 26 East Chestnut St. on July 9 at 9 a.m. The intersection across from Holiday Inn’s Imperial restaurant and anywhere across the street from East Chestnut and North Queen streets are good locations to catch the rappelers as they descend the east side of the building. Two DJs will be at the event to provide music. Viewers are welcome to bring signs to cheer on the rappelers. Parking is available at the adjacent Duke Street parking garage or the Red Rose Transit Authority Queen Street Station across the street.

To get help from VisionCorps

VisionCorps is open Monday through Friday from 8 a.m. to 4 p.m. on 244 North Queen St. Contact VisionCorps by phone at (866) 876-6550 or info@visioncorps.net. VisionCorps offers services for infants, children and adults as well as prevention services like screenings and routine eye care. Learn more at the VisionCorps website: services.visioncorps.net/services/.

'Ready to rock and roll': VisionCorps fundraiser sends participants Over The Edge

As I stood next to Jesse Miller on Friday in the Holiday Inn in downtown Lancaster, my nerves started to get the best of me.