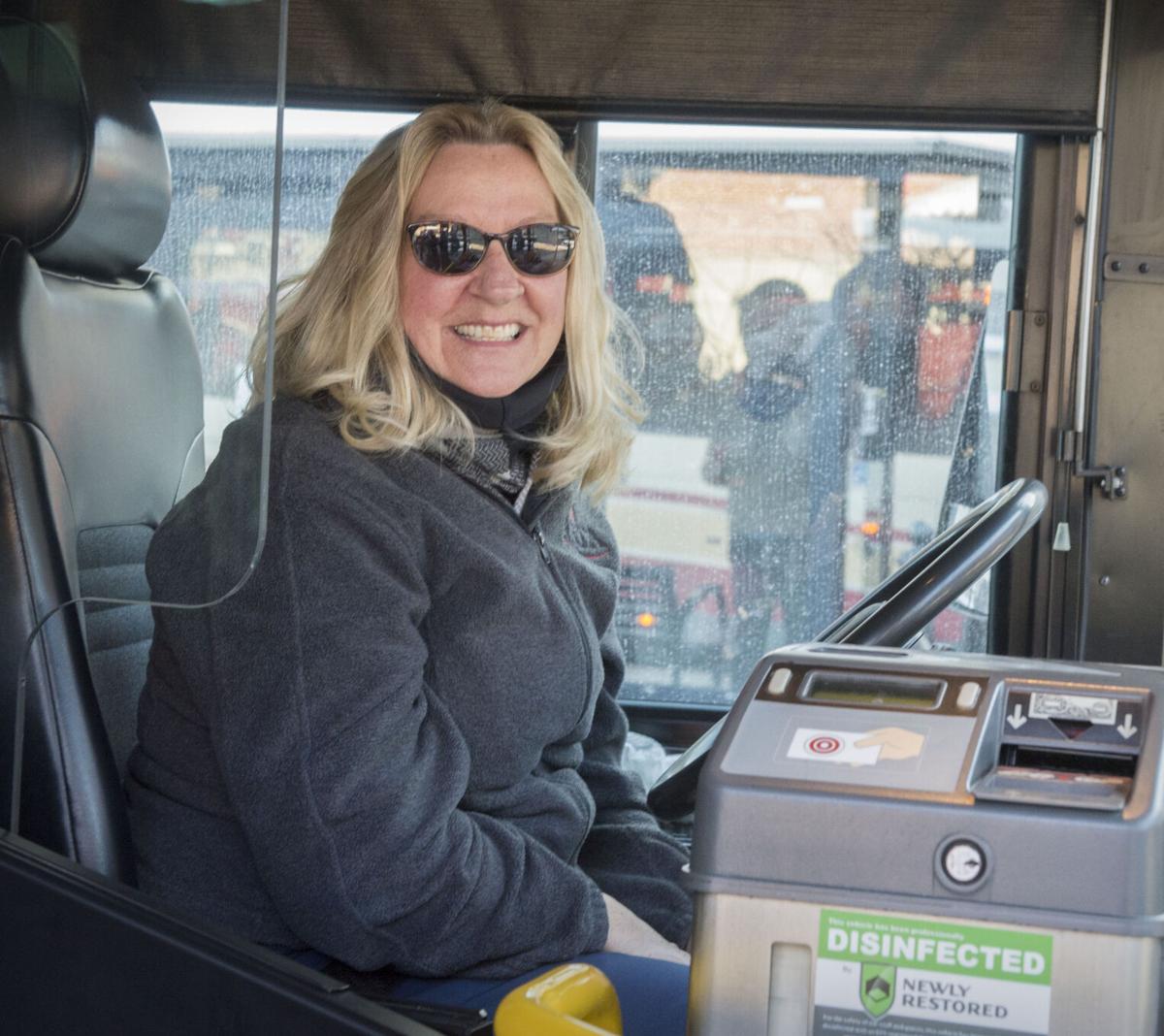 Red Rose Transit Authority driver Denise Smith removes her mask for a photo Dec. 18, 2020. Smith, who was the authority's first female driver, was retiring after 41 years behind the wheel. 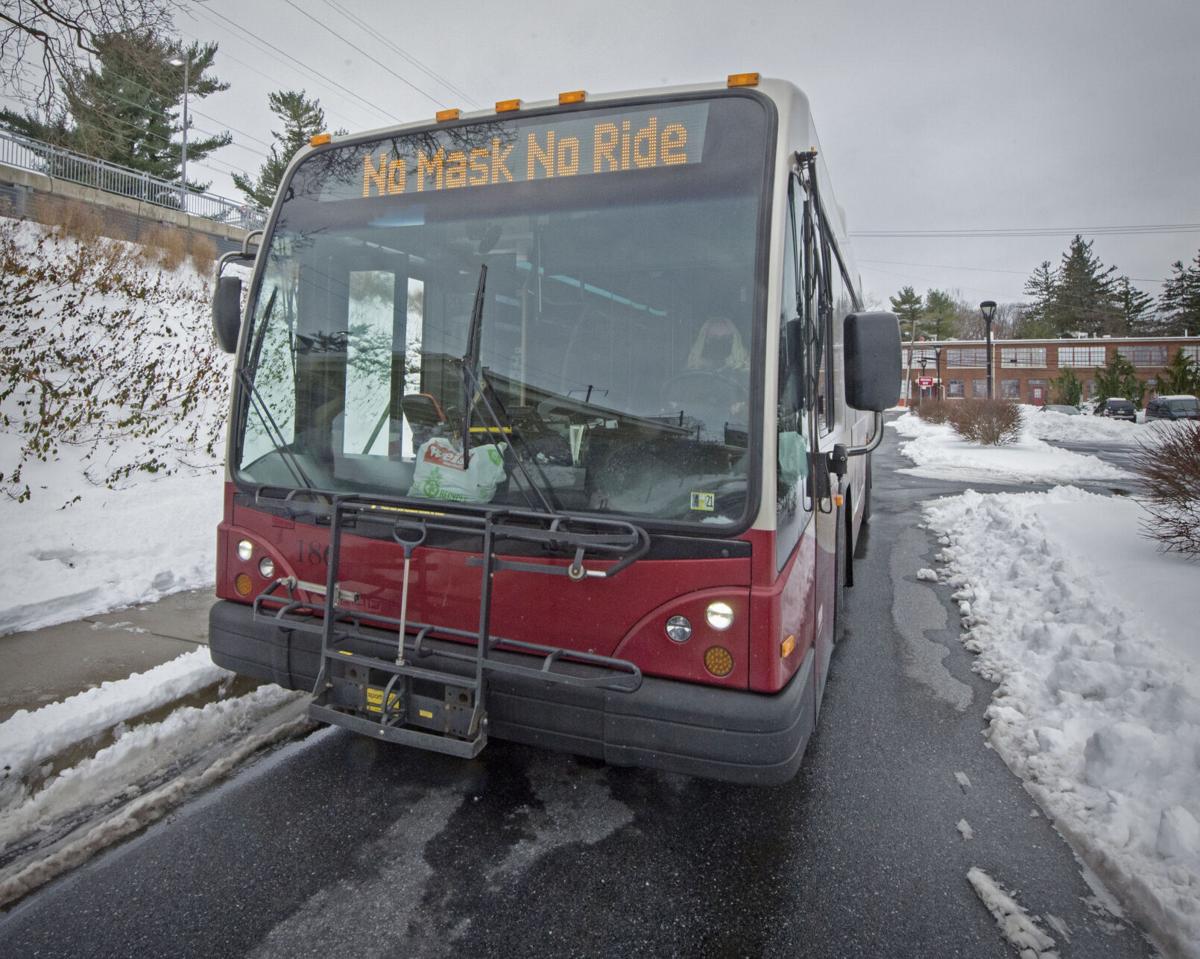 Red Rose Transit Authority driver Denise Smith waits for riders at the Amtrak station in Elizabethtown on Dec. 18, 2020. Smith, who was the authority's first female driver, was retiring after 41 years. 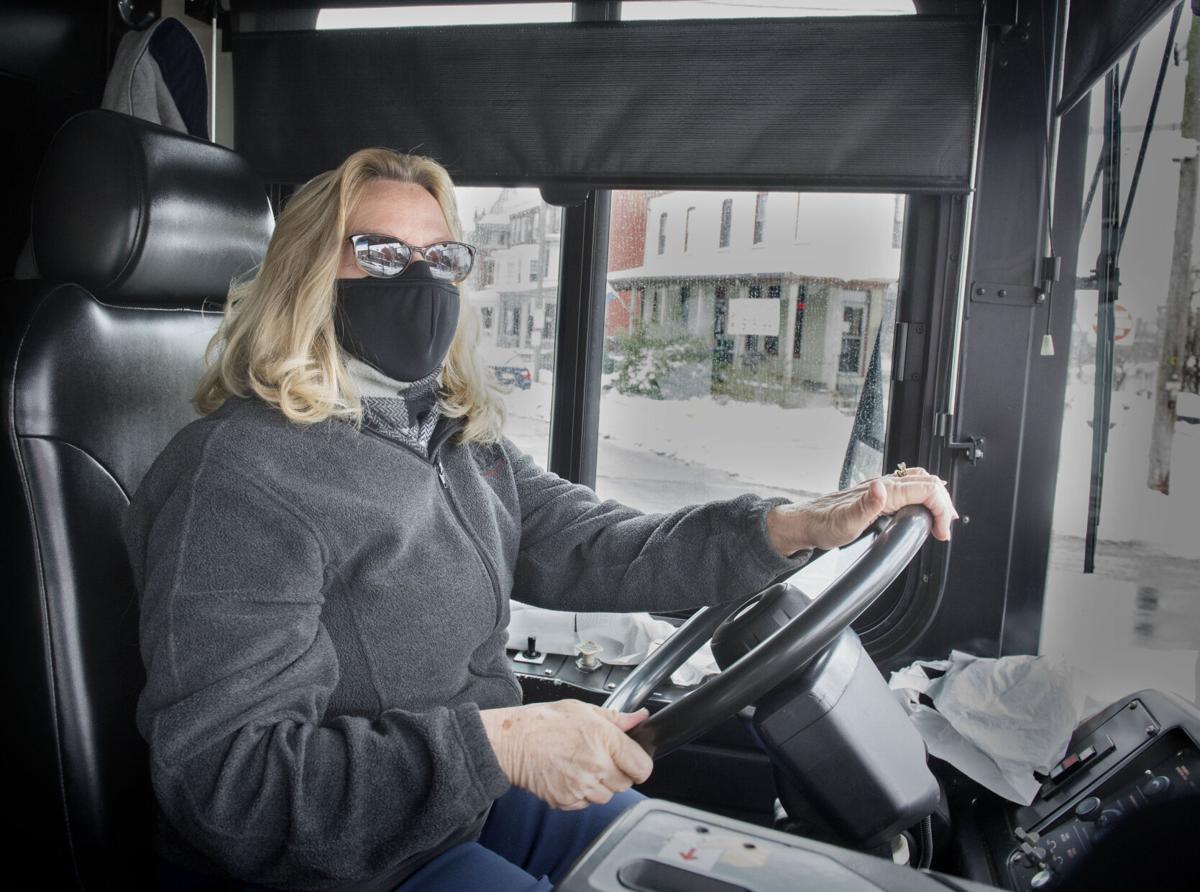 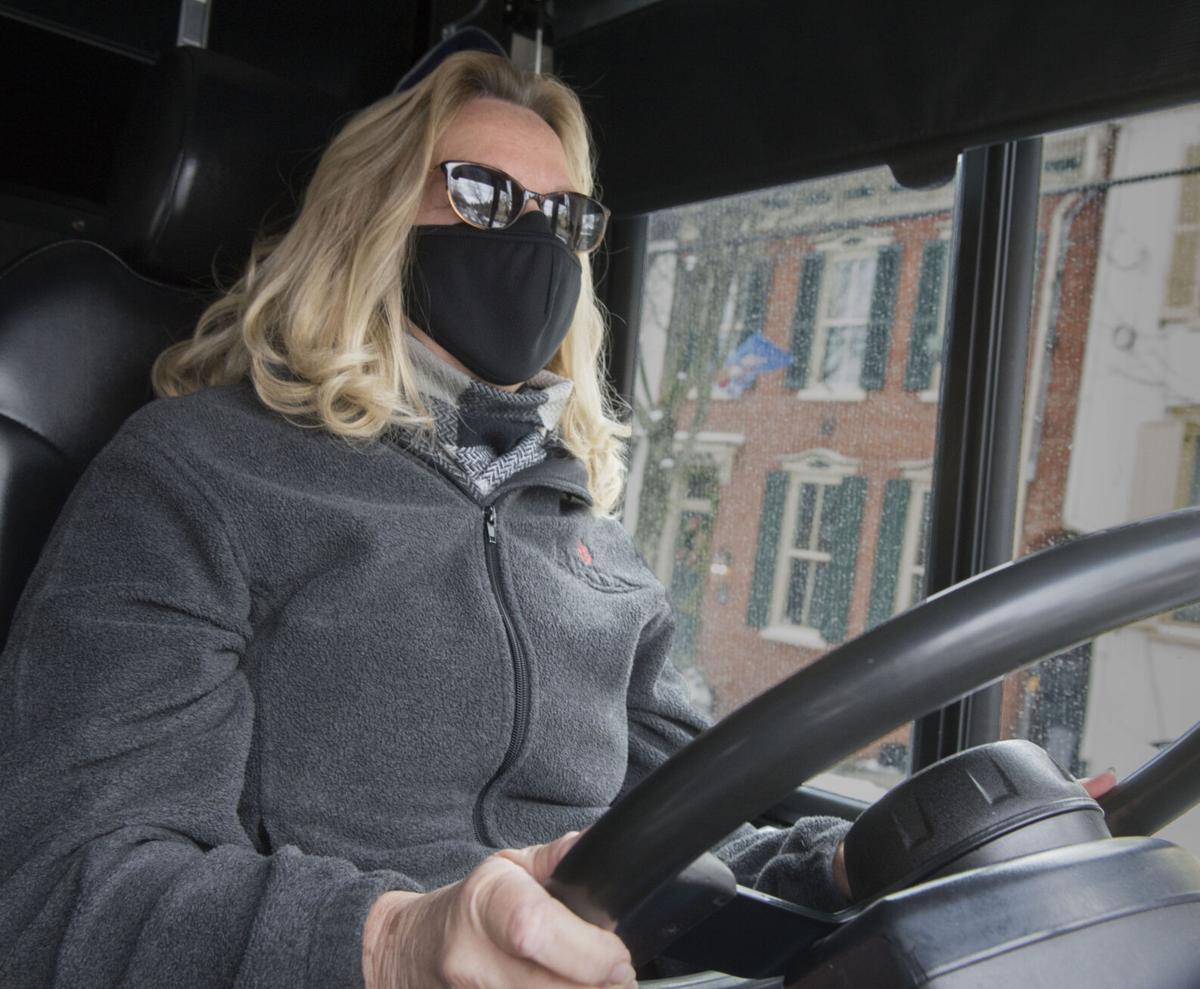 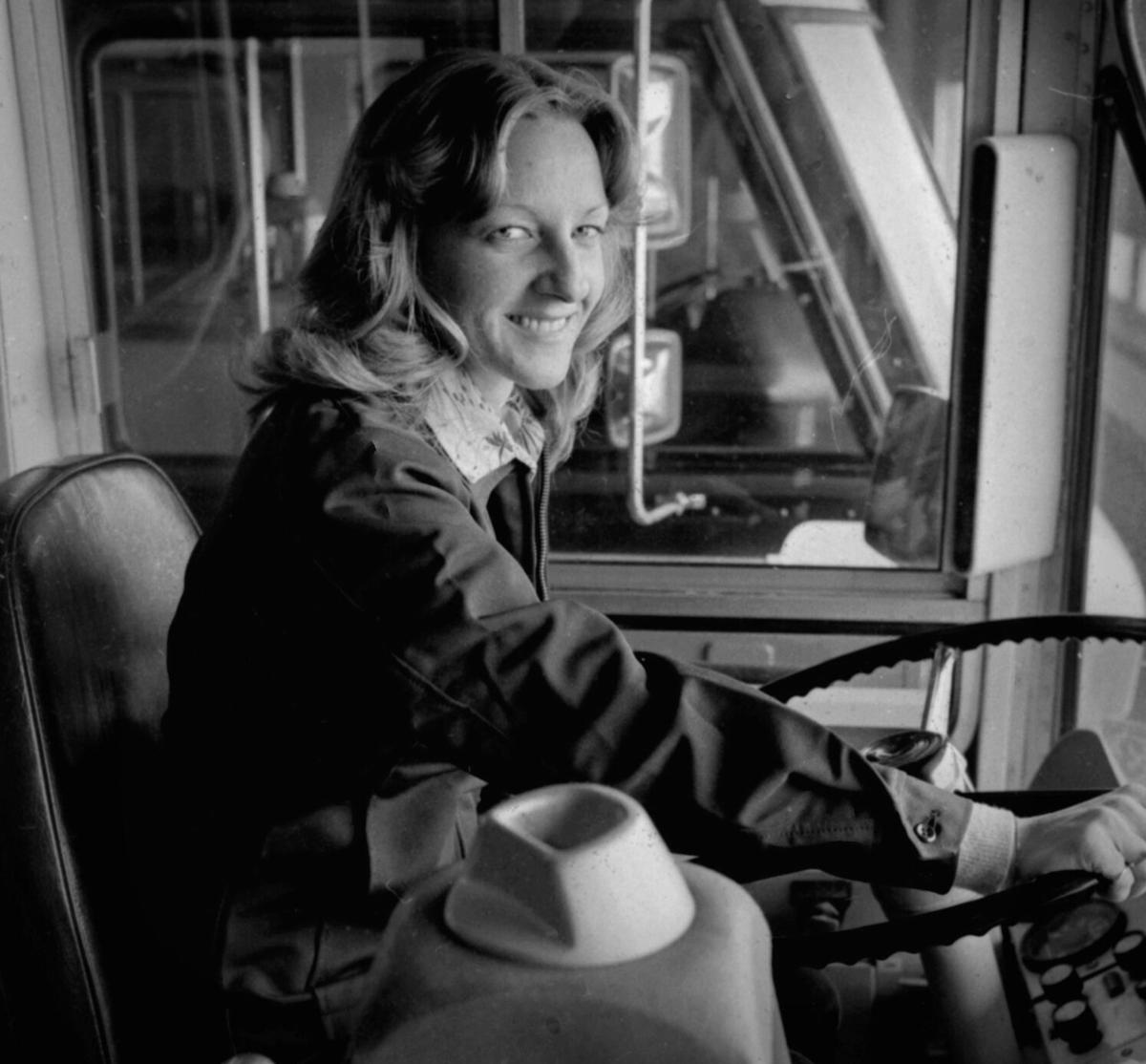 Denise Smith went by her maiden name, Denise Stoltzfus, when this photo appeared in the Lancaster New Era on Feb. 7, 1980. She was Red Rose Transit Authority's first female driver. Smith is retiring after 41 years.

Red Rose Transit Authority driver Denise Smith removes her mask for a photo Dec. 18, 2020. Smith, who was the authority's first female driver, was retiring after 41 years behind the wheel.

At the wheel of the Route 18 bus, Denise Smith, 64, departed Lancaster’s Queen Street Station with two riders at 12:10 p.m. Friday on a run to Elizabethtown that would prove routine in every way but one: it was her last after 41 years.

A pleasant, reserved woman, wearing a scarf, gray fleece and black facemask, Smith kept to a tight schedule on a winding, two-hour, 45-mile roundtrip through snow-blanketed Landisville and Mount Joy to Elizabethtown’s Amtrak station. Then she headed back the same way to Lancaster. All told, she transported 10 riders.

“Be safe out there,” said one as he got off in Mount Joy with a companion who used a walker.

Smith has seen traffic get heavier and motorists get ruder over the decades. Otherwise, driving a bus hasn’t changed much since Smith became the first woman hired by Red Rose Transit Authority.

Smith, at 23, didn’t set out to be a trailblazer. She was an evening cook at Brethren Village retirement home who saw in the want ads that the transit authority was hiring.

She thought, Why not?

It didn’t particularly worry her that she had never driven anything bigger than a Chevette subcompact.

The transit authority hired the Warwick High School graduate in November 1979 and trained her for more than two months before deciding in February 1980 she was ready for her first solo run. It was from Lancaster to Columbia.

”People would get on and look at me. Nobody said a word,” Smith said. “It was a little intimidating.”

“She was first, but she also is one of our best,” said David Kilmer, the transit authority’s executive director. “I wish I could clone her.”

Kilmer said Smith had few accidents over the years, all minor, and he can’t remember a rider complaining about her.

Early on, a handful of drivers bedeviled the first woman operator. If Smith was their relief driver, they’d pull in late so she wouldn’t start out on time. Or she would find the destination sign changed, forcing her to hand crank it to the correct route.

She warned one driver she would tell a supervisor.

“That took care of it,” Smith said. “He acted as if he was my best buddy after that.”

What’s changed over four decades? The bus is five feet longer and motorists’ patience is shorter.

“It seems that nobody wants to be behind a bus, and I understand that,” Smith said. “But it’s not like they’re going to be behind us long because we’ll pull over again.”

Instead of flashing headlights to signal a bus to get back on the road, too many drivers speed up.

“It’s getting tougher and tougher out there,” Smith said.

Her scariest moment came in Manheim when a car blew through a red light after she got the green and started into the intersection.

Heart in throat, she hit the brakes, and the reckless driver disappeared.

“That’s their lifestyle, their way of getting around,” she said, adding that buggy drivers are generally good about staying to the side.

Smith did not enjoy snowy days.

One Elizabethtown run took nearly 90 minutes longer because of slick roads. Another wintry day featured a police escort on a nail-biting crawl over Chickies Hill, near Columbia.

Her best story is the time ice brought traffic to a halt on a slope along Lincoln Highway East. A passenger asked to get off. A few minutes later, he came out of a store with a bag of kitty litter that he sprinkled around the bus’ rear tires. It worked. The bus got traction, and Smith completed the run.

Smith enjoyed many of the regular riders. Those coming from Central Market often gave her a pastry or fruit item.

“We’re not just some person getting them to and from,” Smith said.

An older woman named Betty, who lived on West Chestnut Street, got on many mornings and rode for two or three trips.

“We chatted the whole time. It made the trip go faster,” Smith said of the 15-year friendship that ended when Betty died.

Smith and her husband, Ricky, a retired plant manager for Case New Holland, have talked about road trips after the pandemic. Key West and the Kentucky Derby are likely destinations.

Smith said she’s fine if Ricky does most of the driving.

Driving through Lancaster on West Chestnut Street, with only a couple of minutes left on her last run, Smith saw a driver in a Ford Taurus pull suddenly from a parking space. It caused Smith to brake quickly and mutter something under her breath.

“We don’t stop on a dime,” she said afterward.

Smith finished at the transit center at 2:14 p.m., letting two riders off.

Because it snowed the day before, Smith had called Pfeiffer and told her, “Do not bring me a cake. I do not want you out in the weather.”

Pfeiffer showed up instead with a pastry box containing a fancy cupcake.

“She trained me and taught me a lot,” Pfeiffer said. “She’s going to get a cake one way or another.”

John J. Jeffries owner clarifies stance on pandemic, decision to stay open; 'How do we take care of our families?'

When: Elizabethtown Area School District board meeting via Zoom, Dec. 15.

With a heart filled with gratitude, a long-time reporter files a final column before retiring

I spent most of my life writing newspaper stories because it was the only thing I wanted to do.