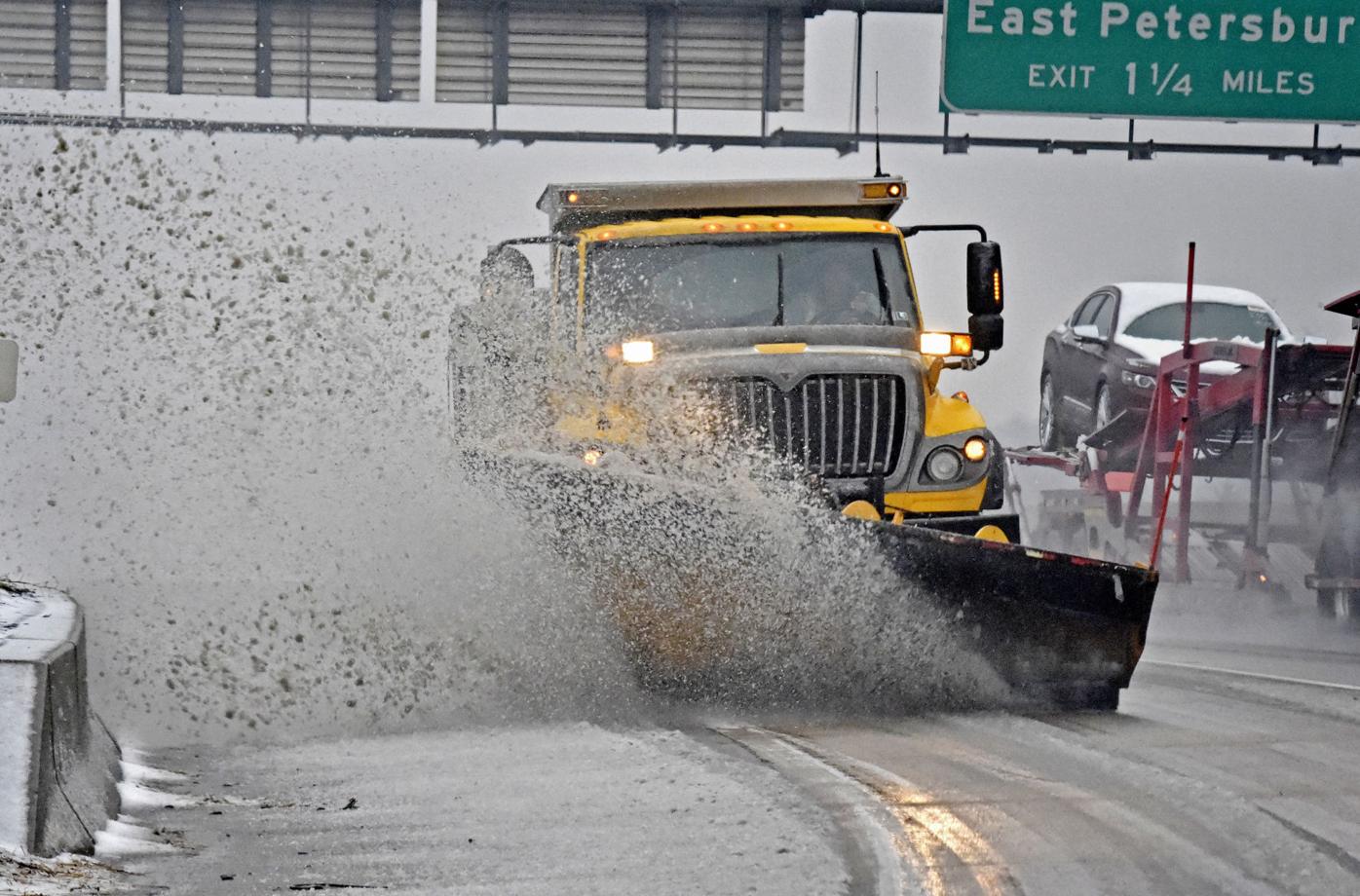 Slush files from a the plow of a PennDOT truck on east bound Route 283 near Route 30 in Manheim Township Wednesday morning February 7, 2018. 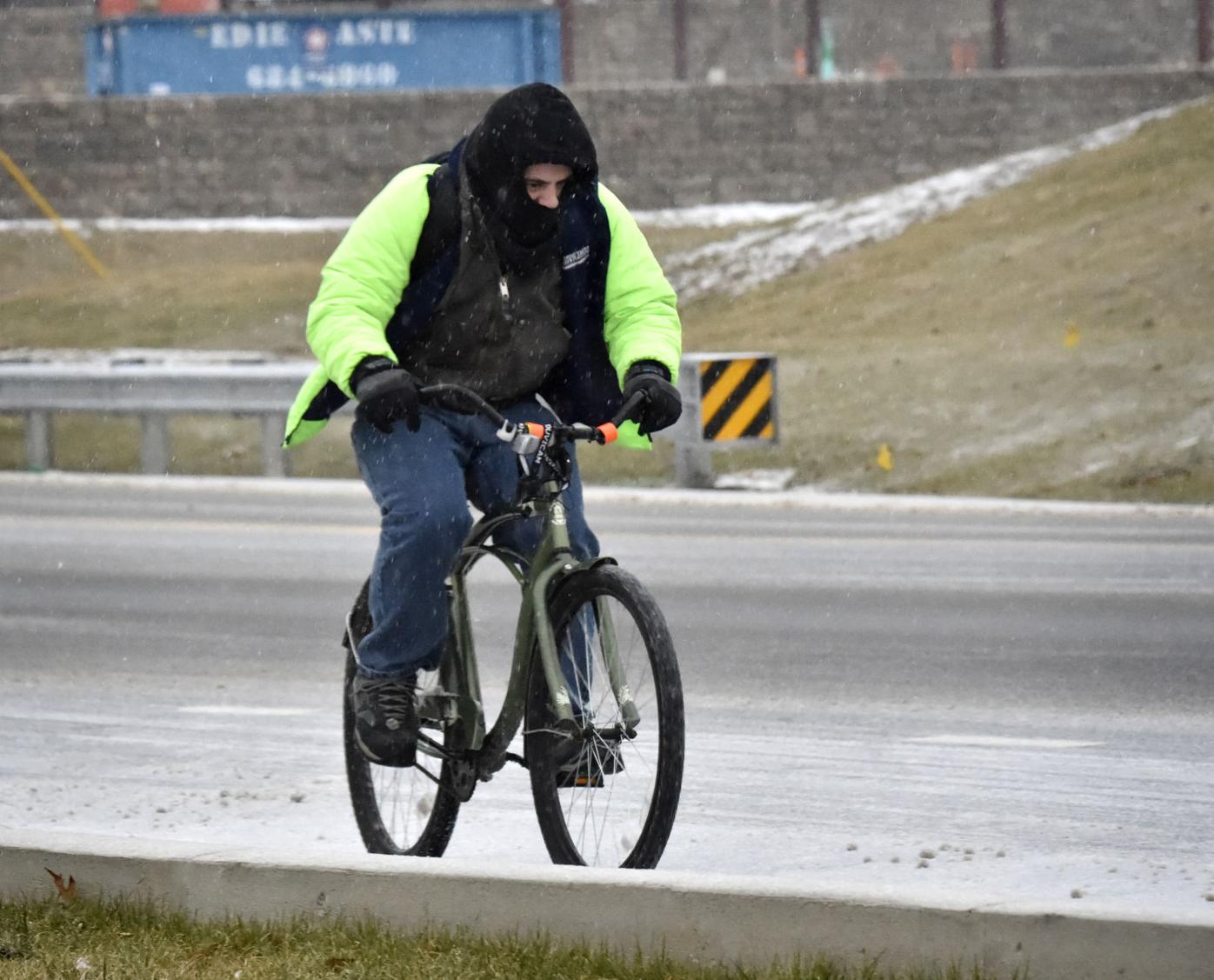 A man bikes in snow, sleet and rain on Rohrerstown Road in East Hempfield Township on Wednesday, Feb. 7, 2018. 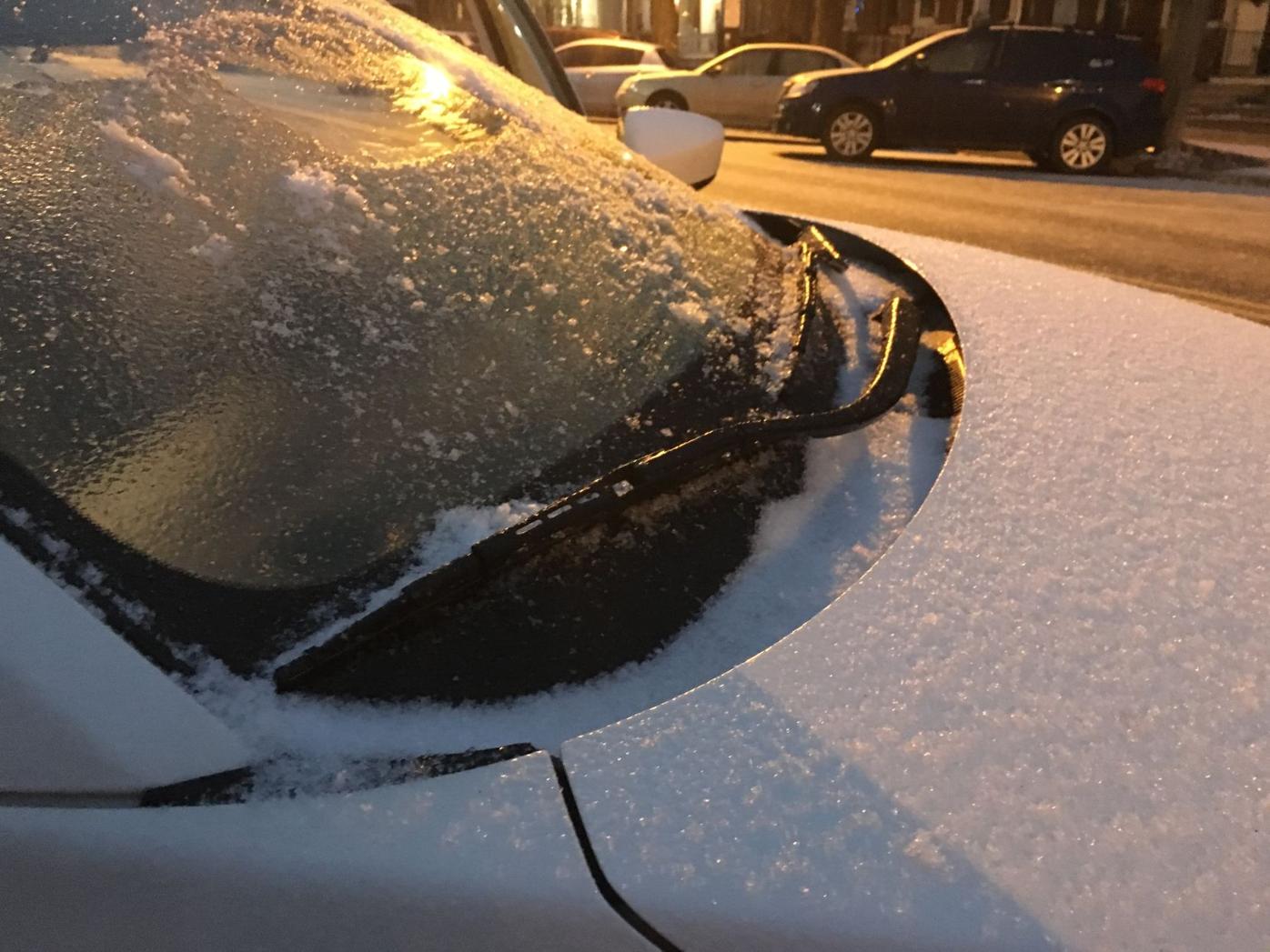 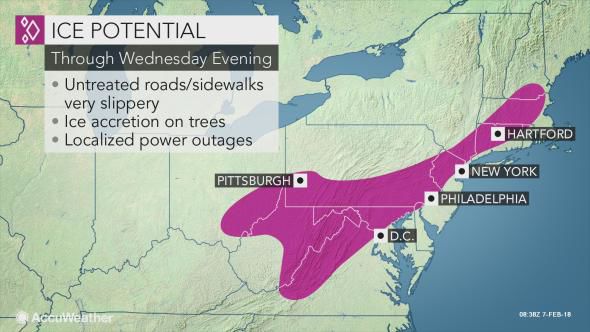 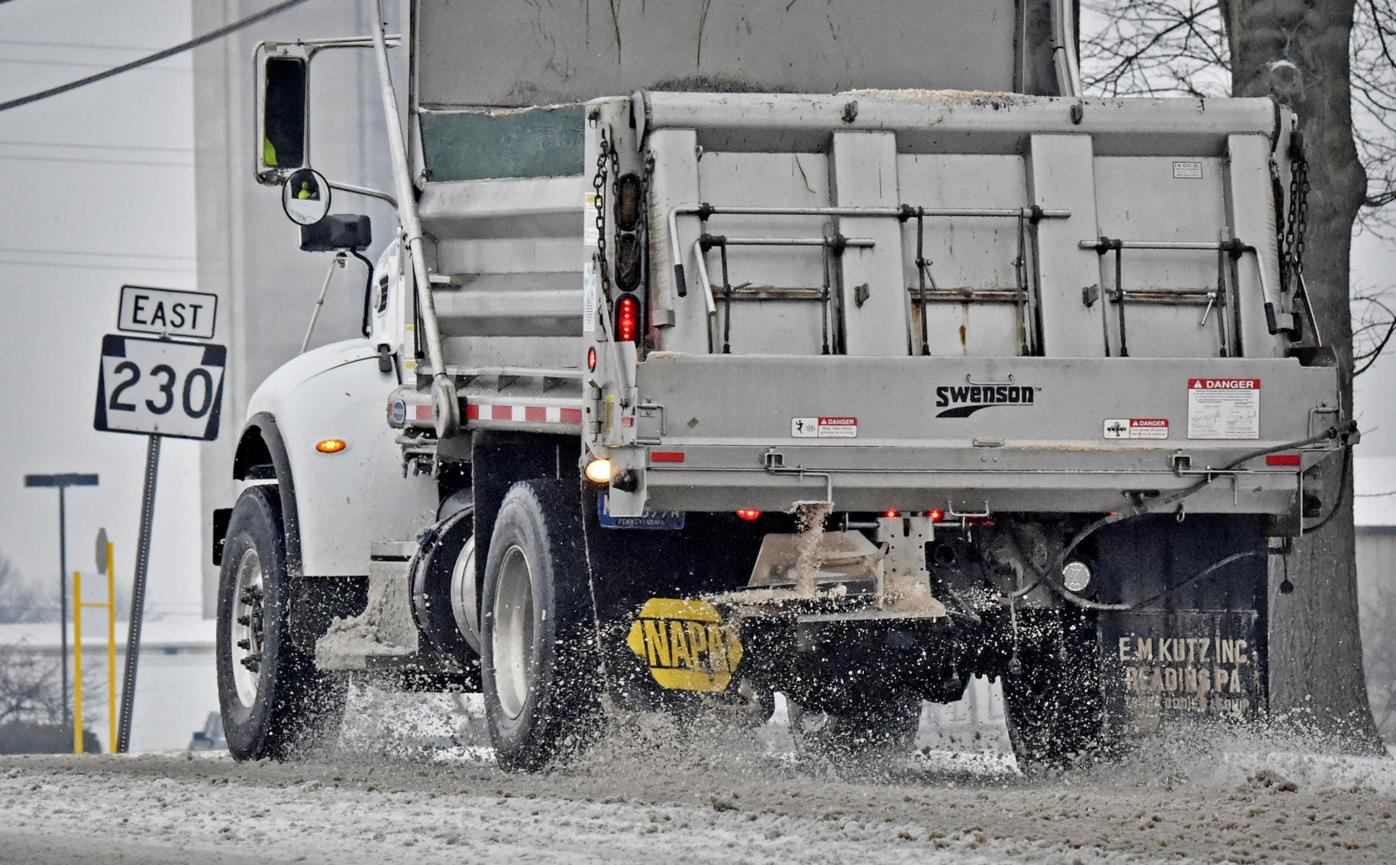 A Mount Joy Borough truck drops salt along Route 230 on the east side of Mount Joy Wesdesday morning February 7, 2018.

Slush files from a the plow of a PennDOT truck on east bound Route 283 near Route 30 in Manheim Township Wednesday morning February 7, 2018.

A man bikes in snow, sleet and rain on Rohrerstown Road in East Hempfield Township on Wednesday, Feb. 7, 2018.

A Mount Joy Borough truck drops salt along Route 230 on the east side of Mount Joy Wesdesday morning February 7, 2018.

Vehicle accidents were reported around Lancaster County after a mix of snow, sleet and freezing rain fell starting this morning.

By midday Wednesday, Lancaster County-Wide Communications said they had received reports of 30 vehicle accidents since 5 a.m.

Forecasts called for sleet and freezing rain in the morning. Up to 2 inches of accumulated sleet was possible in some parts of Lancaster County, according to Millersville University meteorologist Eric Horst.

By midday sleet started to changeover to rain, Horst said. Even with a temperature of 31 degrees in Millersville, the rain wasn't sticking, he said.

The frequency of weather-related crashes slowed as temperatures warmed slightly in the afternoon and sleet shifted into plain rain.

But with temperatures dropping this evening, Horst warned of ice on roads.

Now 31° here @millersvilleu but plain rain falling....NOT freezing on most surfaces. How is this? Midday solar insolation imparting just enough energy to prevent freezing. Beware that temps will cool this evening, and icy conditions will return. #WetSlushyIcyWednesday

The National Weather Service in State College said a winter weather advisory for Adams, Fulton, Franklin, Lancaster and York counties will be in effect from 3 a.m. to 4 p.m. Wednesday.

Speeds on major roadways in South Central Pennsylvania were reduced to 45 mph at 5:30 a.m. In Lancaster County, that includes routes 283, 30 and 222. The speed reductions were lifted around 2 p.m., according to the Pennsylvania Department of Transportation.

Warm air aloft is looking so aggressive that I believe we may not see any snow, but instead begin as mainly sleet & freezing rain (areas south of Turnpike) and quickly go over to all freezing rain. Untreated roads will be icy! #BlackIceAlert

At 6:10am, precip is rapidly expanding over Lancaster county...with freezing rain across SoLanco a mix of sleet & freezing around Lanc city & suburbs, and icy mix with some snow flakes in NorLanco. But freezing rain will quickly become the main precip type everywhere. #BlackIce

A friendly warning: All surfaces are currently sub-freezing, which means developing sleet & freezing rain will immediately create a treacherous icy layer. While salted roads may just be wet, many secondary roads, sidewalks, driveways will be like a skating rink. #IcyWednesdayAM

“Snow and ice will result in difficult travel conditions, including during the morning commute … ,” according to the NWS.

Horst said he doesn't expect much snow accumulation in central Lancaster County, although 2 inches would be possible in the northern part of the county.

PENNDOT out clearing roads. This is Rt 283 near Rt 30 in Manheim Twp. There have been a few accidents around the county this morning. @LancasterOnline pic.twitter.com/fQgFFaPFwp

“Freezing rain midmorning into midday will result in some ice accretion, especially air-cooled surfaces like trees, powerlines, bridges, etc.,” he said in an email to LancasterOnline on Tuesday. “Salt-treated roads should be mainly wet during the midday/afternoon, but secondary roads and sidewalks, etc. will be slippery/icy into the afternoon."

Regionally, he said 3 to 8 inches could fall north of the Pennsylvania Turnpike with the potential for 8 or more inches in the northern part of the state.

Horst said the temperature will slowly rise from the 20s at dawn to between 32 and 34 in the afternoon. He said Wednesday night will turn breezy and colder with the temperature falling back into the 20s, “so a refreeze and some black ice will develop on we and untreated surfaces later in the evening and overnight.”

Rain will end btwn 5:00-6:00pm across Lanco. Temps are currently (at 4:00pm) between 32 and 36 degrees, but will fall slowly into the evening hours...so that untreated surfaces will refreeze. Careful for #BlackIce overnight.

The outlook warns that slushy or wet untreated roads will freeze into a thin layer of black ice as temperatures drop into the 20s Wednesday evening.

The probability for widespread hazardous weather will be low Thursday through Tuesday, NWS said.

If you plan to travel to Philadelphia Thursday for the parade celebrating the Eagles Super Bowl championship, both AccuWeather and the NWS are calling for a mostly sunny day with temperatures in the lower 30s.