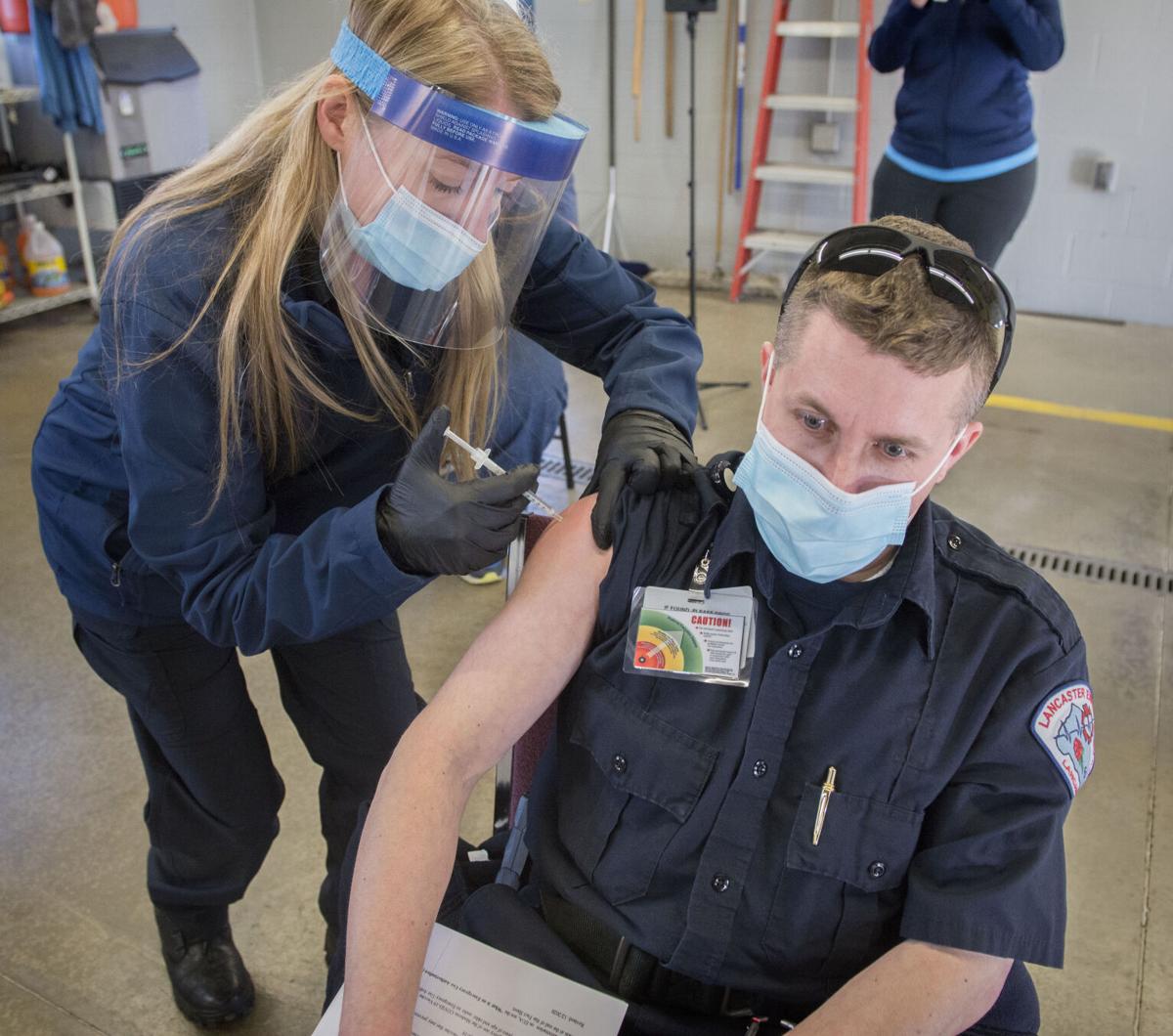 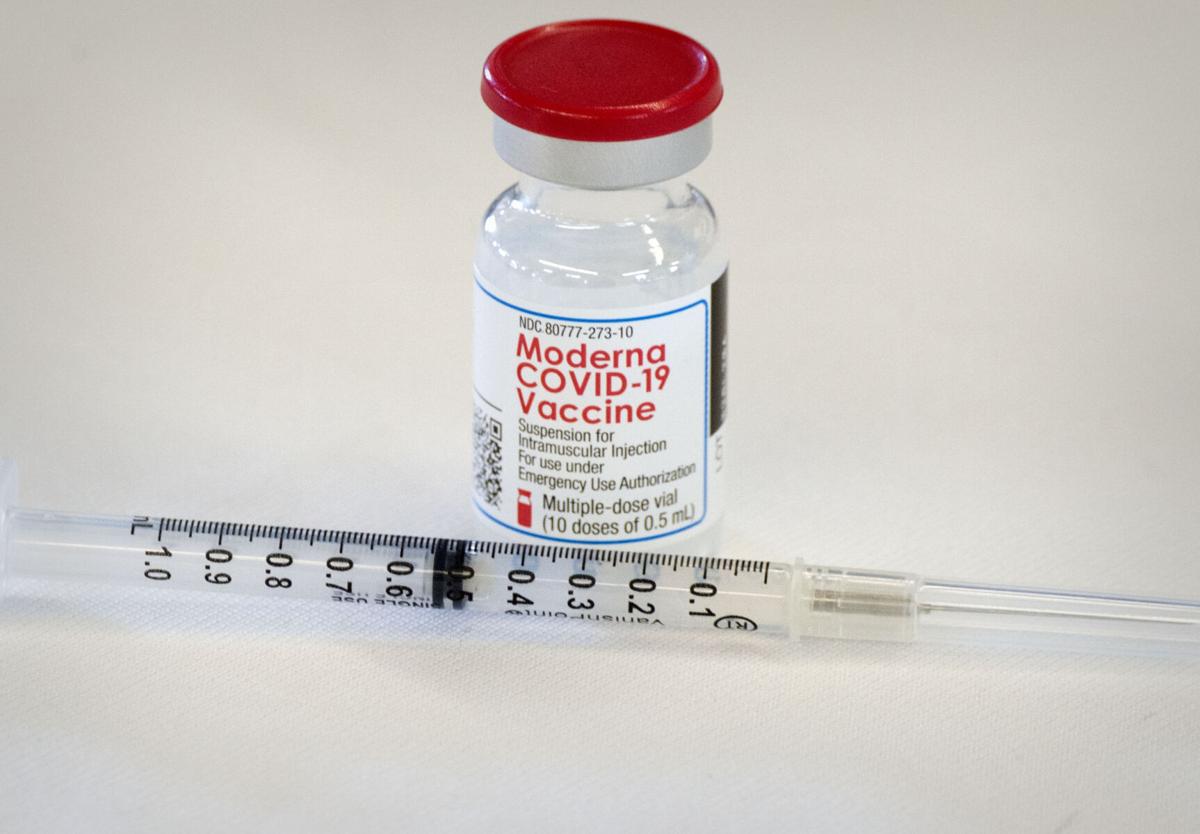 A vial and syringe containing the Moderna COVID-19 vaccine sits on the table at the Lancaster EMS Headquarters 1829 Lincoln Hwy. in East Lampeter Township Monday, Jan. 18, 2021. The vaccine was administered to people in phase 1A at Lancaster EMS Monday.

A vial and syringe containing the Moderna COVID-19 vaccine sits on the table at the Lancaster EMS Headquarters 1829 Lincoln Hwy. in East Lampeter Township Monday, Jan. 18, 2021. The vaccine was administered to people in phase 1A at Lancaster EMS Monday.

Only about half of Lancaster County’s first responders — emergency medical service personnel and police officers — have received or have plans to get the COVID-19 vaccine. And no agency says it currently intends to make the vaccination mandatory.

LNP | LancasterOnline contacted all 18 EMS companies serving the county. The six agencies that responded reported that half — 51% — of their personnel had already received or had plans to receive the vaccine.

Similarly, the six police departments that responded reported that about 53% of their officers had received or planned to receive the vaccine.

The findings roughly mirror results of a Pew Research Center survey in December that found 60% of Americans would definitely or probably get the COVID-19 vaccine.

Of the decision not to make the vaccine mandatory, most officials said they viewed getting the vaccine as a matter of personal choice that should be left up to the employee.

Suzette Kreider, compliance manager for Northwest EMS in Elizabethtown, said 53 of the company’s 80 workers had received the vaccine, the highest rate of the six EMS agencies that responded.

“We are not making it mandatory, but we are strongly encouraging it,” she said.

Kreider said the agency received legal advice that a vaccine mandate was inappropriate because the current COVID-19 vaccines are approved for only emergency use by the Food and Drug Administration. If one or more vaccines is endorsed for widespread use by the FDA, she said Northwest EMS may reconsider.

According to the Equal Opportunity Employment Commission, employers can require the vaccine. However, employees can refuse, citing religious or medical reasons.

Les Martzall, president of Ephrata Ambulance, said he was also advised by legal counsel that the agency could not make the vaccine mandatory. He said he has had his two shots, along with 50% of the agency’s other workers.

“We don’t make the flu vaccine mandatory, although hospitals are able to,” Martzall said. “I have mixed reactions on making it mandatory, (but) we would encourage them to get it. A lot of them are young and so of course, they think they’re invincible.”

Of the EMS workers who chose not to receive the vaccine, representatives for the services said their reasons ranged from being pregnant or breastfeeding, to religious beliefs and medical conditions. Others said they wanted to see more data on the vaccine.

Bob May, head of Lancaster EMS, the largest and busiest emergency service provider in Lancaster County, said his agency is not mandating the vaccine. About 45% of its roughly 150 employees designated as first responders have gotten the vaccine.

Vaccine or no vaccine, employees will continue wearing gloves and masks, May said.

“Our policy for right now, subject to change, everybody is still following PPE precautions,” he said.

Police officers are not yet eligible to receive the vaccine under the state Health Department’s current rollout plan, but some departments have been surveying their members and signing them up to be vaccinated when the shots are available. Some officers have also been able to get the vaccine because they respond to ambulance calls.

The largest police department by far in the county is the Lancaster Police Bureau, with about 135 officer positions. It also has nearly 70 firefighters.

“Due to a myriad of legal and operational issues associated with a city with three different labor unions and over 550 employees implementing a mandatory vaccination policy, the City of Lancaster is not mandating that city employees receive COVID-19 vaccinations,” Jess King, chief of staff to Mayor Danene Sorace, said in an email. “The city is, however, strongly encouraging its employees to receive the vaccination and is continuously educating its employees regarding the vaccine.”

City fire Chief Scott Little said that 27 out of his 68 firefighters had received the vaccine as of about two weeks ago, and he thought that number would increase. He said he’s gotten both his shots and had no problems.

About half of Manheim Township’s 65 officers has indicated they will get the vaccine, Chief Thomas Rudzinski said. The township has the second-largest municipal department in the county.

Of the half-dozen of the county’s roughly two-dozen municipal police departments that responded, East Hempfield Township reported the highest percentage of officers interested in getting the vaccine.

“About 92% of my officers want the vaccine. I have 34 officers,” Chief Stephen Skiles said. “At this point, the township hasn’t discussed whether it would ever be mandated. The seasonal flu vaccine has never been mandated but the township offers them.”

“We have almost 100% participation in the vaccination for our officers so (we) have not dwelled on the need to make the vaccine mandatory,” Township Manager Cindy Schweitzer said via email. “However, discussions remain open and ongoing regarding mandating vaccination and the implications of those choosing not to vaccinate.”

In East Lampeter Township, about half of the 38 police officers have signed up, according to Chief Stephen Zerbe.

“On the topic of mandating sworn personnel to get the vaccine, we have seen court opinions that would indicate that employers of essential workers could mandate employees to get the vaccine,” he said via email. “However, we chose not to do so. In the end, this vaccine will be similar to a flu vaccine and we don’t mandate that either.”

The Republican Committee of Lancaster County did not debate or vote on a proposed resolution to censure U.S. Sen. Pat Toomey for his vote to f…

As mayors of Pennsylvania cities, we witness the human toll the pandemic takes each day it stretches on. We see families losing loved ones, jo…

Roughly 100,000 Pennsylvanians may have their first or second dose of the Moderna COVID-19 vaccination delayed because of what state health of…

Editor's note: This story has been updated.Where will the mass vaccination site be?