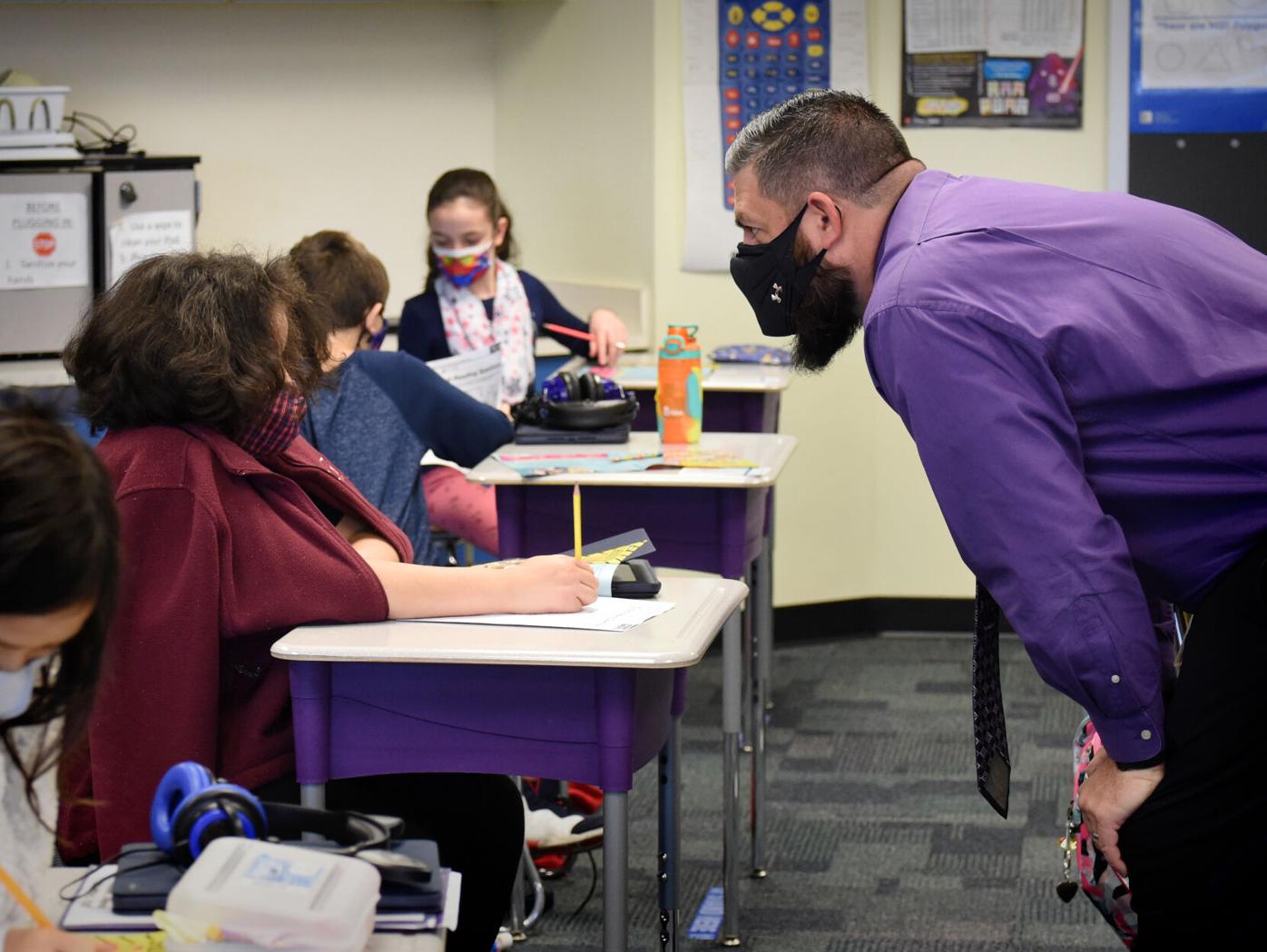 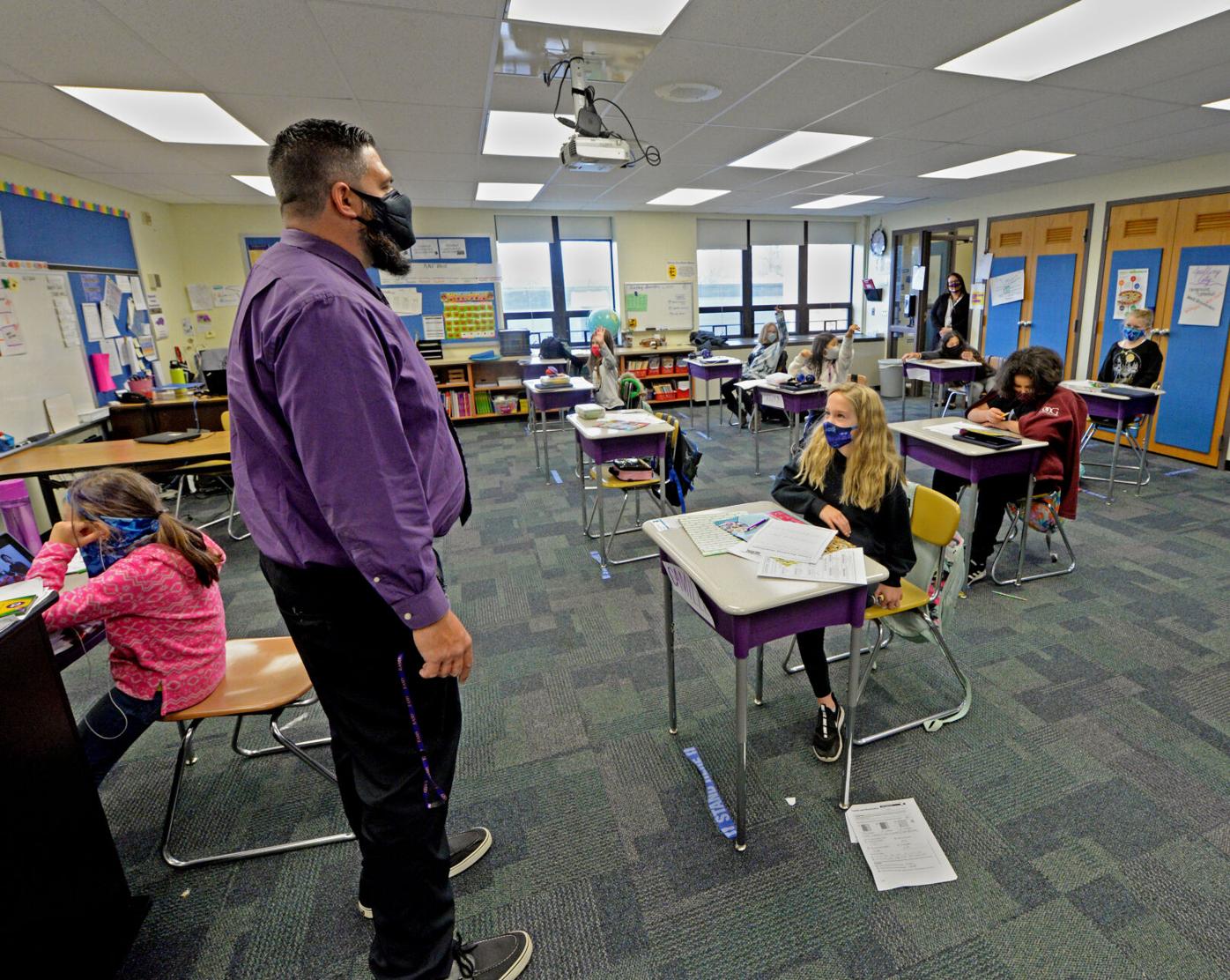 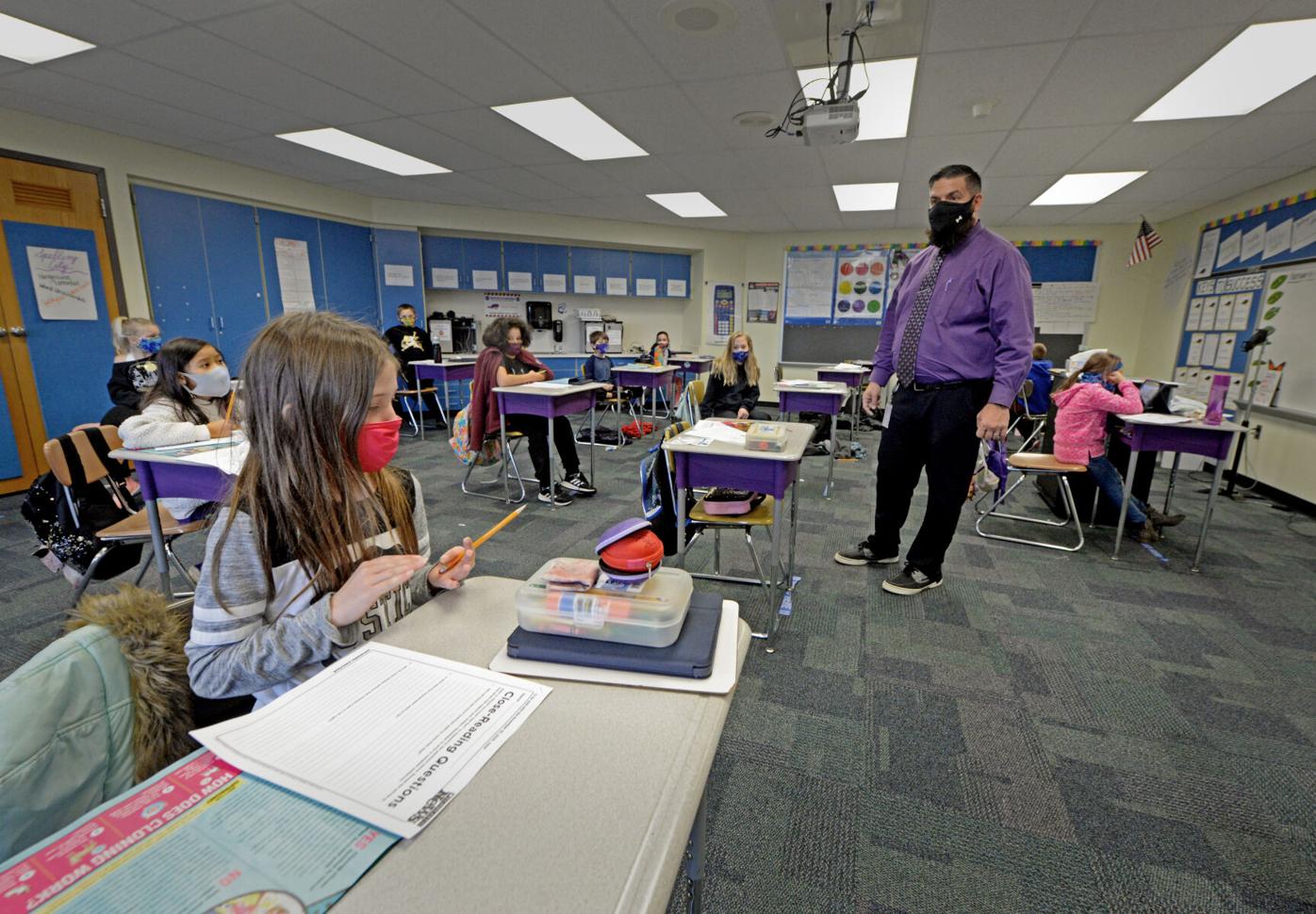 Ephrata High School math teacher and football coach Kris Miller, right, talks to a student as he fills in for a fourth grade teacher at Highland Elementary School Tuesday, Dec. 1, 2020. 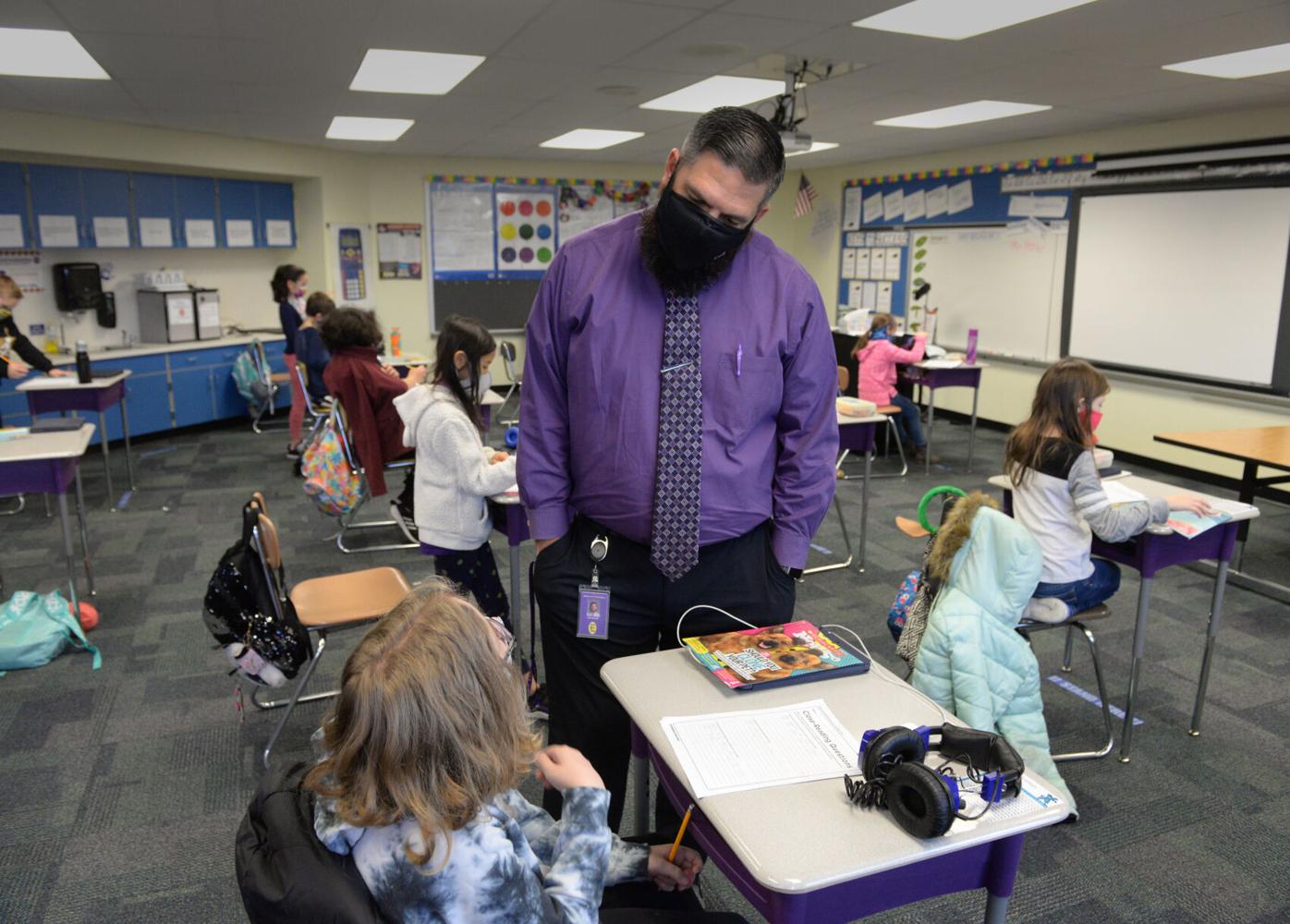 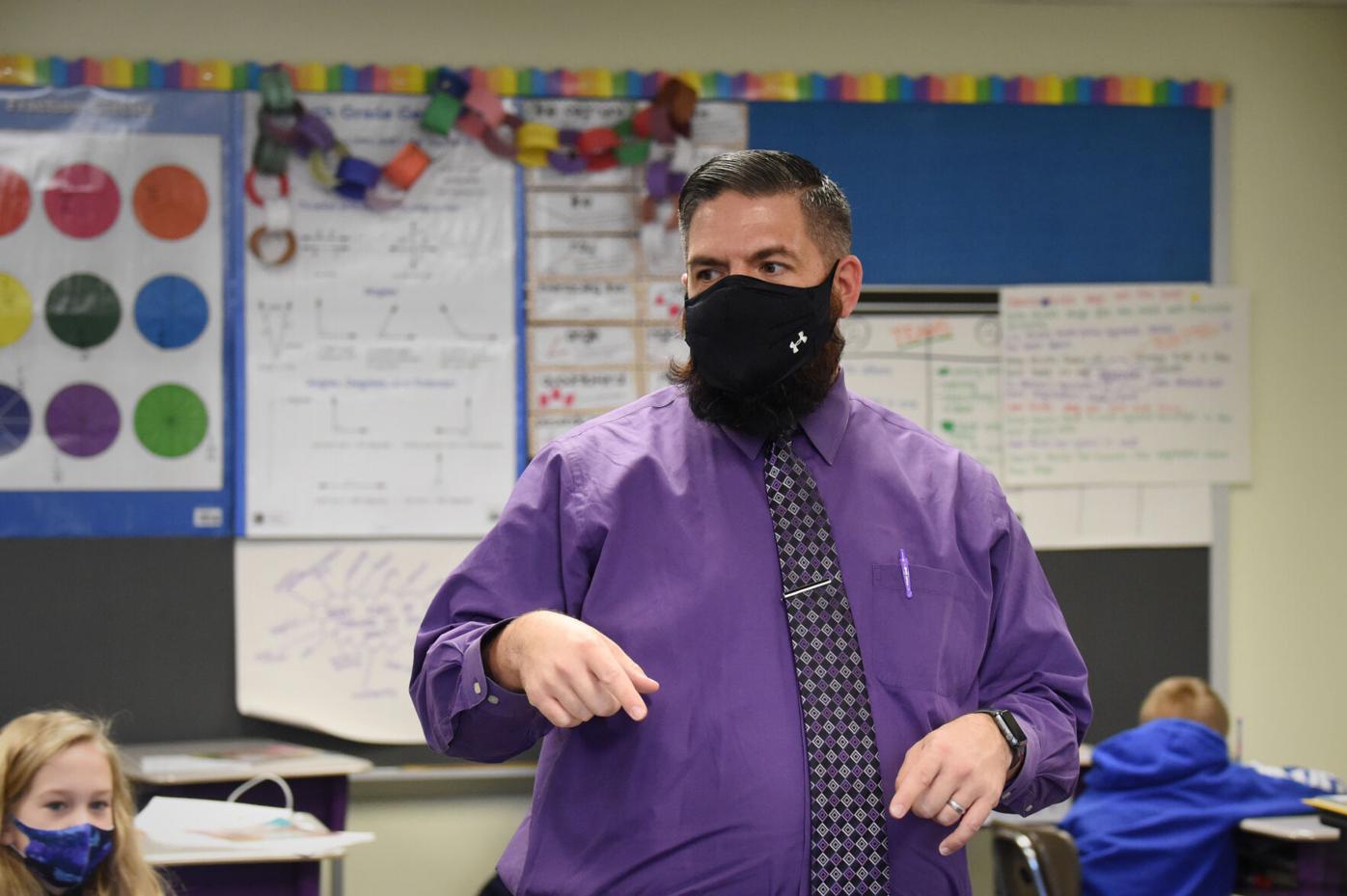 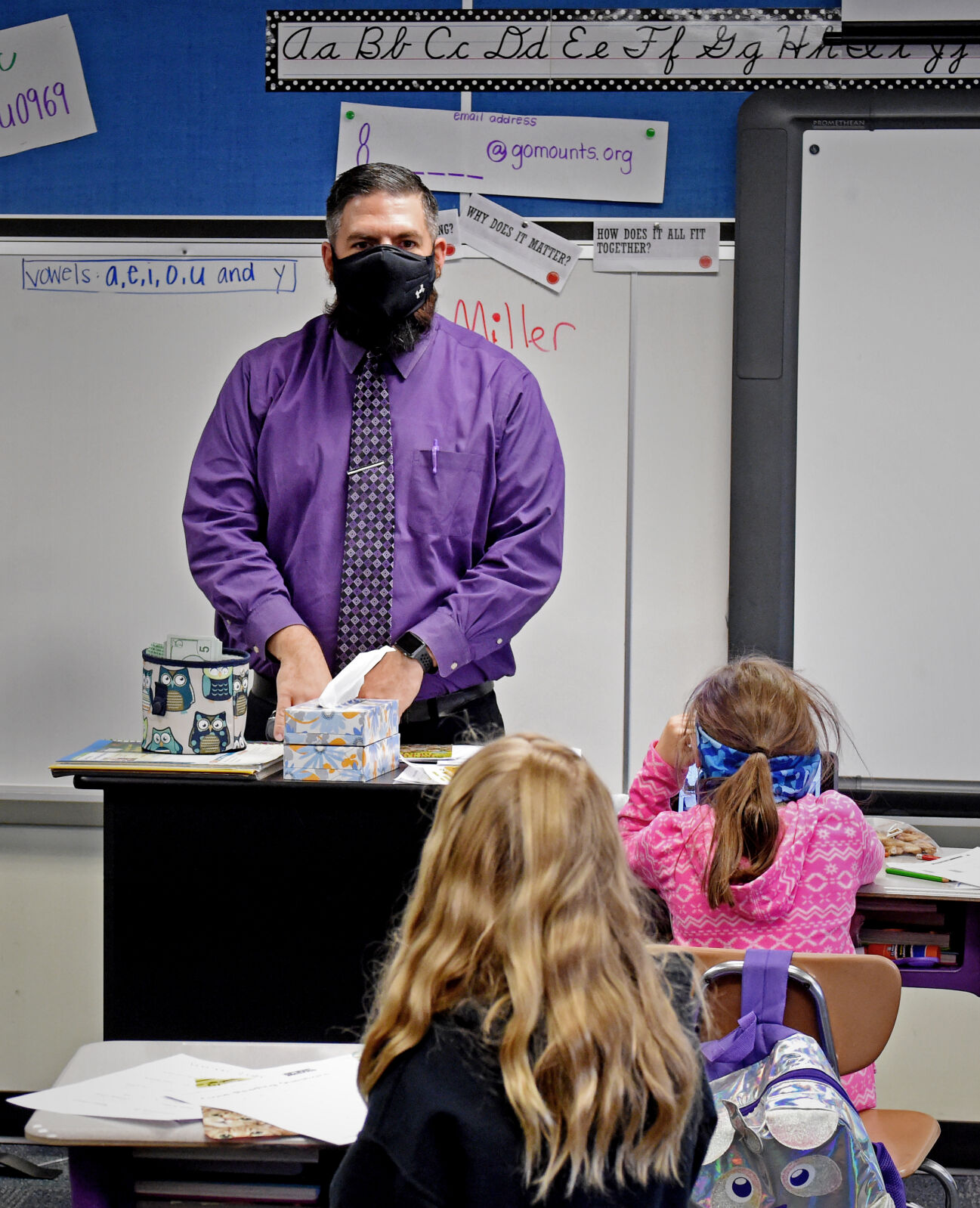 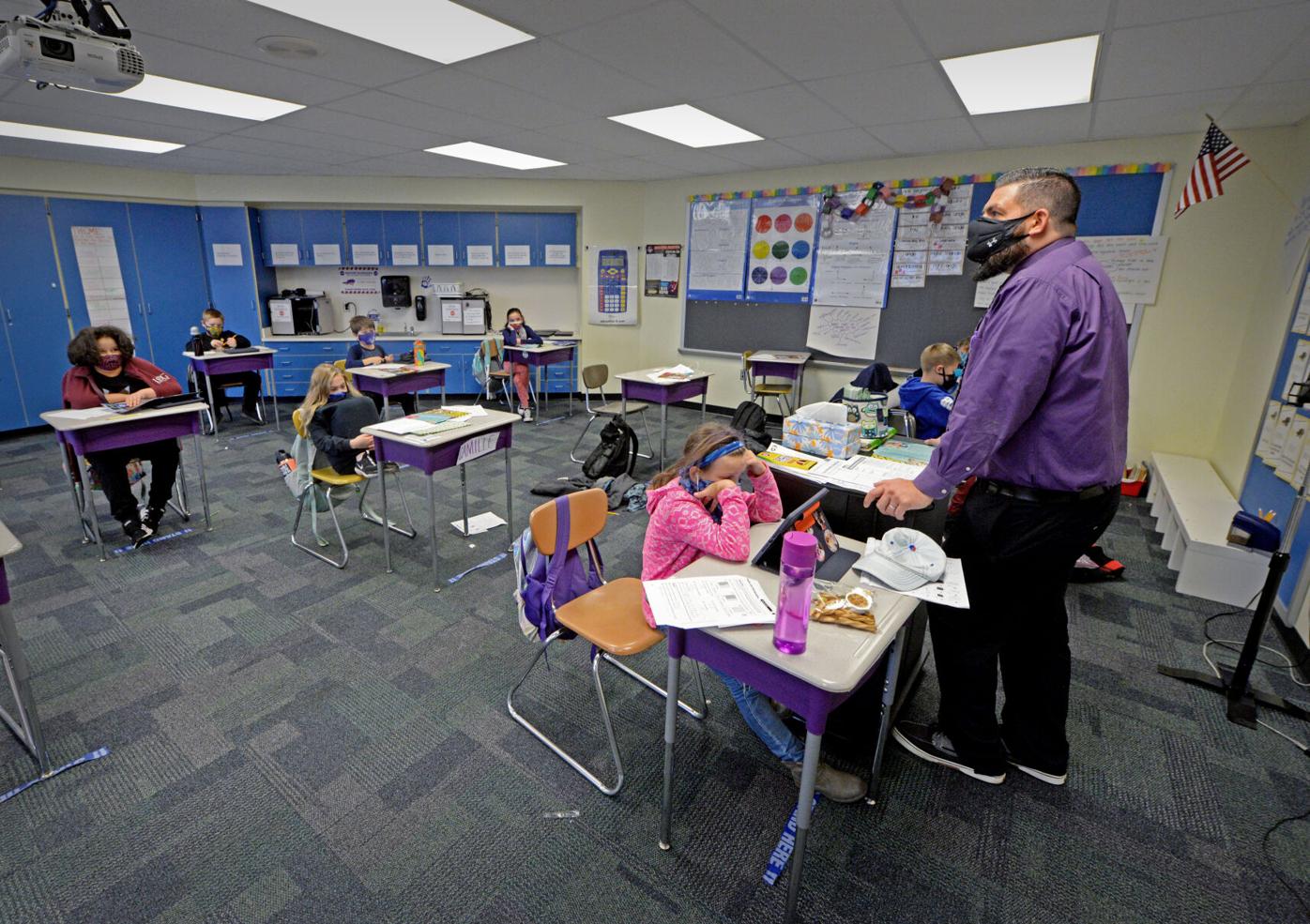 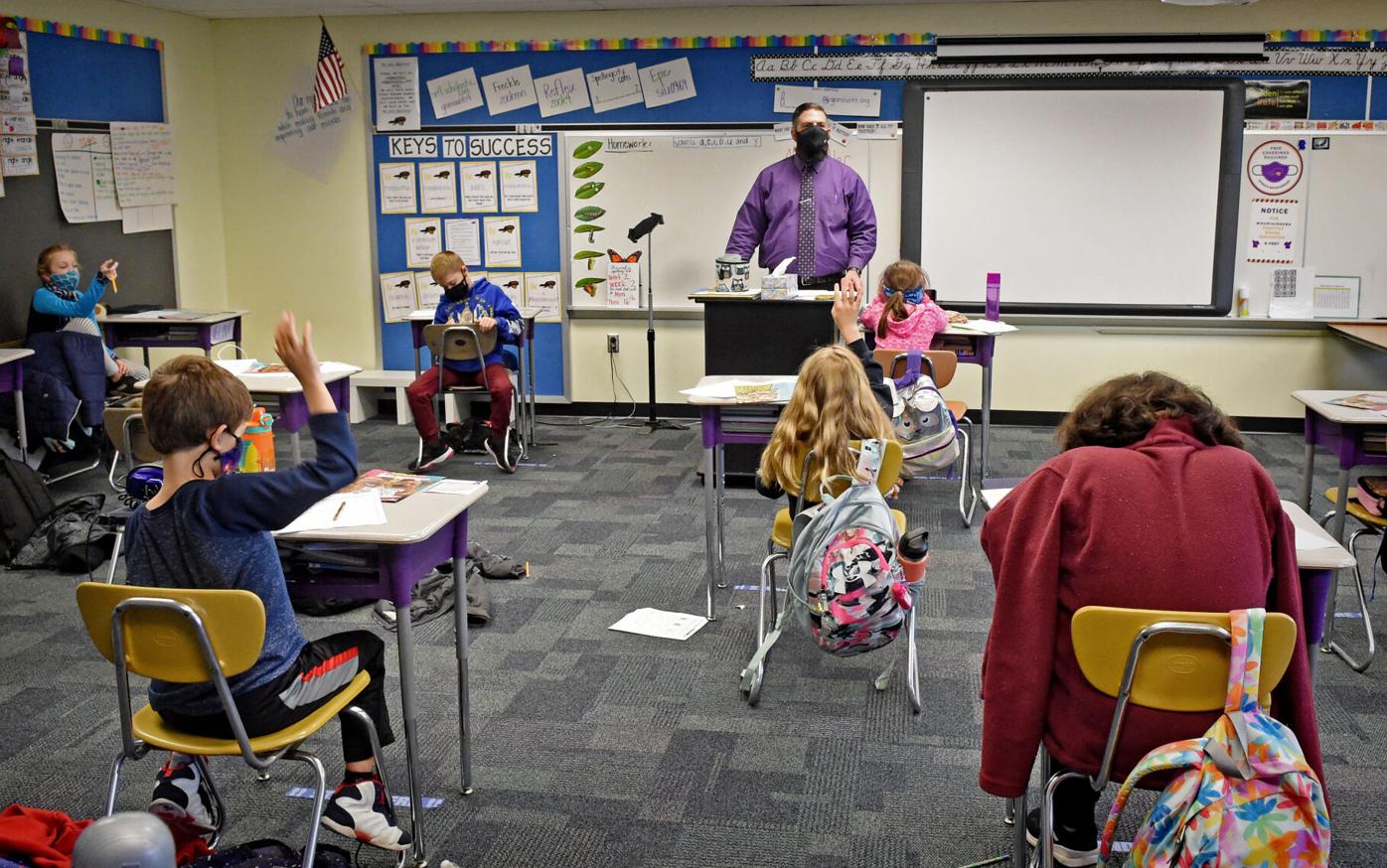 Ephrata High School math teacher and football coach Kris Miller, right, talks to a student as he fills in for a fourth grade teacher at Highland Elementary School Tuesday, Dec. 1, 2020.

He had his students read an article from a recent edition of Scholastic News. “Could You Clone Your Pet?” the headline read.

Miller then went around the room and asked students to share their pets’ names and decide whether they’d consider cloning them. After all, who doesn’t want their pet to live forever?

“Charice? No,” Miller said, uncharacteristically fumbling on the student’s name.

“Charis,” the student said, correcting him.

“I used to have, um, three cats, but now I only have two because one of them died,” Charis said.

“Oh, that’s sad,” Miller said. “Did you ever think about cloning your cat?”

It’s not every day Miller has such a discussion with his students. That’s because, on this day, Miller wasn’t teaching math. He was teaching fourth-grade at Highland Elementary School.

It was part of a temporary volunteer initiative at Ephrata Area School District to recruit high school teachers to fill empty classrooms at the elementary and middle school level. The district was facing a higher amount of teacher quarantines due to holiday gatherings and out-of-state travel.

While teacher quarantines and staff shortages were of heightened concern around the holidays, it’s been a nagging issue for all Lancaster County school districts this pandemic-plagued school year as administrators think of every possible way to keep school buildings open.

Quarantined teachers are remote teaching from home. They’re using prep periods to fill in for absent colleagues. In some districts, schools are merging classes together, abandoning social distance protocols put in place to keep students and educators safe.

Compounding that is the shrinking pool of available substitute teachers — an existing problem that’s been exacerbated by the pandemic.

When all else fails, a school is forced to suspend in-person instruction.

‘It can burn staff out’

One of the latest victims: Wheatland Middle School in the School District of Lancaster.

Students there have learned remotely since Feb. 11, when more than 20% of the school’s staff was absent. District spokesman Adam Aurand wouldn’t share exactly how many teachers were out — because teacher quarantines change all the time, he said — but a certain amount of teachers were quarantined due to one case of COVID-19. Wheatland has 75 full-time staff, 20% of which would be 15.

As of Wednesday afternoon, there were five COVID-19 cases among students and employees at Wheatland, but none actively impacting staffing. Students were expected to return to in-person learning today; however, a districtwide flexible instructional day was implemented because of the snow forecast.

School District of Lancaster, the largest county school district with about 11,000 students, is less than a month into having all grades back for in-person learning, but staffing has already proven to be a problem.

When quarantined teachers are able to work from home, they do, Aurand said. But an adult still needs to physically be present in the classroom. Other teachers, principals, paraprofessionals, even district office-level staff have filled in for teachers when substitutes aren’t immediately available.

“It can burn staff out,” Aurand said, “because they don’t have the prep time they’re used to having. But it’s sort of an all-hands-on-deck approach.”

“It’s a concern,” Aurand said of substitute teacher availability. “If we’re asking them to provide 20% of staff, that’s a significant ask of them.”

Aurand is talking about the Substitute Teacher Service, which hires and assigns substitute teachers for all but two Lancaster County school districts.

The pool of available substitute teachers has dipped significantly since last school year, according to JR Godwin, vice president of business affairs for STS.

From Aug. 1, 2020, to Jan. 31, there were 1,067 substitutes available — 546, or 34%, less than the same period last school year, STS data shows. Jobs filled during those same periods have also dropped 34% — from 31,742 to 21,051 — this year; however, School District of Lancaster’s long stretch of remote learning at the beginning of the school year undoubtedly had an impact. STS has been able to fill 80% of jobs, compared to 89% last school year, also during the same time period.

“Overall, it’s a very difficult school year,” Godwin said, adding, in some cases, “it’s trying to find an army of people to take over” at schools with a significant number of quarantined teachers.

Making matters worse, many substitutes don’t want to risk their health by entering a school building, and others are unavailable because they have kids at home learning remotely, he said.

“Some people may back away from it,” Godwin said. “But we are actively hiring.”

Eastern Lancaster County Superintendent Bob Hollister said schools there are short-staffed every day. To preserve continuity of learning for students attending in-person, officials there “have done everything possible to keep the doors open,” Hollister said.

In emergencies, that involves reluctantly going against pandemic protocols.

“We’ve had to combine classes here internally, which is not good, because it violates our cohorting principles,” he said. “… It’s a big problem, and it’s a big problem for everybody.”

At Ephrata, Superintendent Brian Troop said it’s also been a daily challenge for principals to adjust schedules and assign staff to classrooms. With more reasons for teachers to be out, less substitutes available and fewer solutions available because of social distancing, “It’s really like a perfect storm,” he said.

Of teachers, he said, “The flexibility and adaptability has been called to test this year, and they’ve just been doing an outstanding job in doing what needs to get done every day.”

For Kerry Mulvihill, a seventh-grade science teacher at Huesken Middle School in the Conestoga Valley School District, this school year has been the most challenging of her 23-year career.

Teachers are often going without prep periods, even bathroom breaks, because they’re needed in somebody else’s classroom. When teachers see another one of their colleagues is quarantined for two weeks, there’s a collective groan.

Mulvihill, who’s also the vice president of the Conestoga Valley Education Association, said a hybrid model with fewer students in school at one time could’ve prevented at least some of the pandemic’s impact on schools.

“I really think that they’ve stretched the teachers pretty thin here,” she said. “And we, of course, thought hybrid was the best option to keep the numbers lower. I still think that.”

Getting teachers vaccinated, she said, should also be a priority.

Of course, teachers supporting one another has its positives. In Miller’s case, for example, lending a helping hand at Ephrata school district’s Highland Elementary was his way of showing his appreciation for his colleagues and boosting morale, he said. It was also an eye-opening experience to the challenges of substitute teaching, he said.

On the day he covered in the fourth-grade classroom, he let students take a break during which they could use the bathroom, eat a snack and take their masks off for a couple minutes.

“Are we going to have a substitute tomorrow?” one of the students asked during the break.

Another student gave him a thumbs up.

And the next day, he was back.

Wheatland Middle School will immediately move to a virtual format through Wednesday, Feb. 17…

Before school even opened for the first day of classes Monday in the Eastern Lancaster County School District, COVID-19 had made its presence known.

Facing intense budgetary pressure from the coronavirus pandemic and years of being severely underfunded, a handful of Lancaster County schools received a semblance of hope Wednesday as Gov. Tom Wolf proposed what some school officials say is a long-overdue shakeup of education funding in Pennsylvania.

The $1 billion plan to close the gap between growing and shrinking Pa. school districts

If you thought being a public school superintendent is tough, try being a superintendent during a pandemic. In your first year. In a poor, underfunded school district with high administrative turnover. That’s the situation Ashley Rizzo, who took over as Columbia Borough School District superintendent in January, finds herself in.

Local school officials this week expressed frustration over the news that they’ll have to administer federally mandated, high-stakes tests during a year beset by sickness, quarantines, intermittent shifts to remote learning and potentially great learning loss.

The proposal, announced Tuesday, comes as school districts in Lancaster County and beyond are already struggling mightily to fill classrooms due to abrupt quarantines and illness related to COVID-19.

Lancaster County schools to get $127M in coronavirus relief; how will they spend it? [Lancaster Watchdog]

Lancaster County schools will receive an estimated $127 million from the $1.9 trillion federal COVID-19 relief packaged signed into law on Thursday.

'A turning point': More than half of eligible Lancaster, Lebanon county educators vaccinated through state initiative

About 7,400 educators from Lancaster and Lebanon counties rolled up their sleeves for the single-dose Johnson & Johnson vaccine as part of Pennsylvania’s initiative to vaccinate the state’s roughly 200,000 school employees against COVID-19.

Bob Hollister, the longest-tenured school superintendent in Lancaster County, is retiring in early 2022, he announced at the Eastern Lancaster County School District board meeting Monday night.