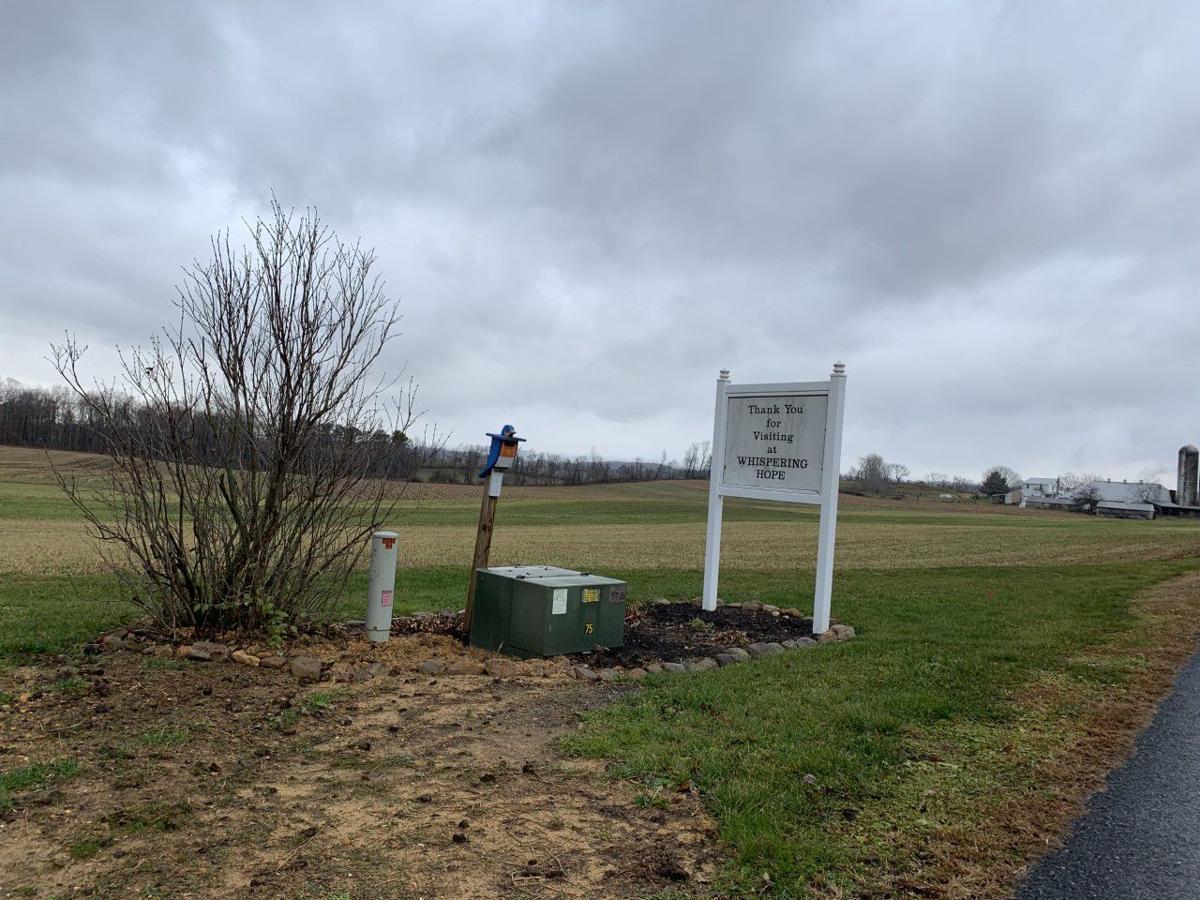 A sign outside of Whispering Hope in Newville in Cumberland County. 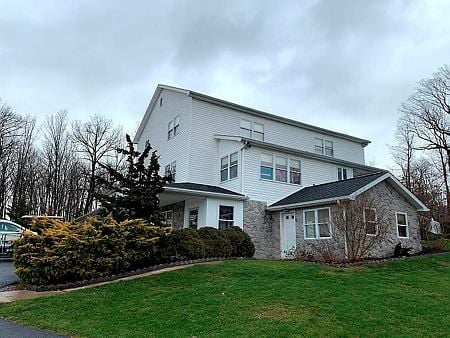 Whispering Hope, in Newville, Cumberland County, is not licensed by the state, but the facility's residents have included Plain-sect men awaiting trial for child sexual assault. 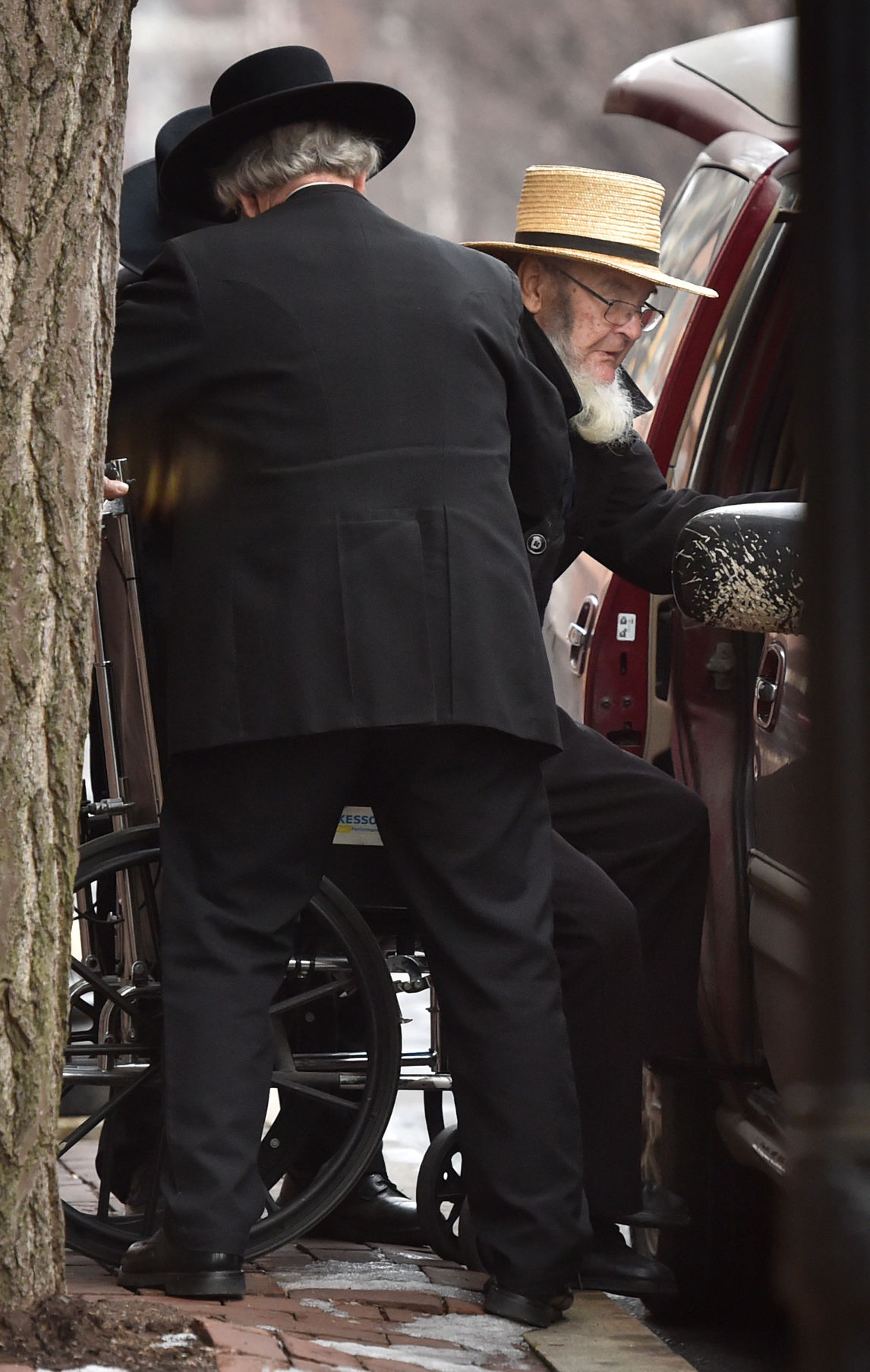 David Smucker is helped to a wheelchair by members of his community for his arrival to the Lancaster County Courthouse where he was sentenced to 38 years of jail time for sexually assaulting four young girls on Friday, January 24, 2020. 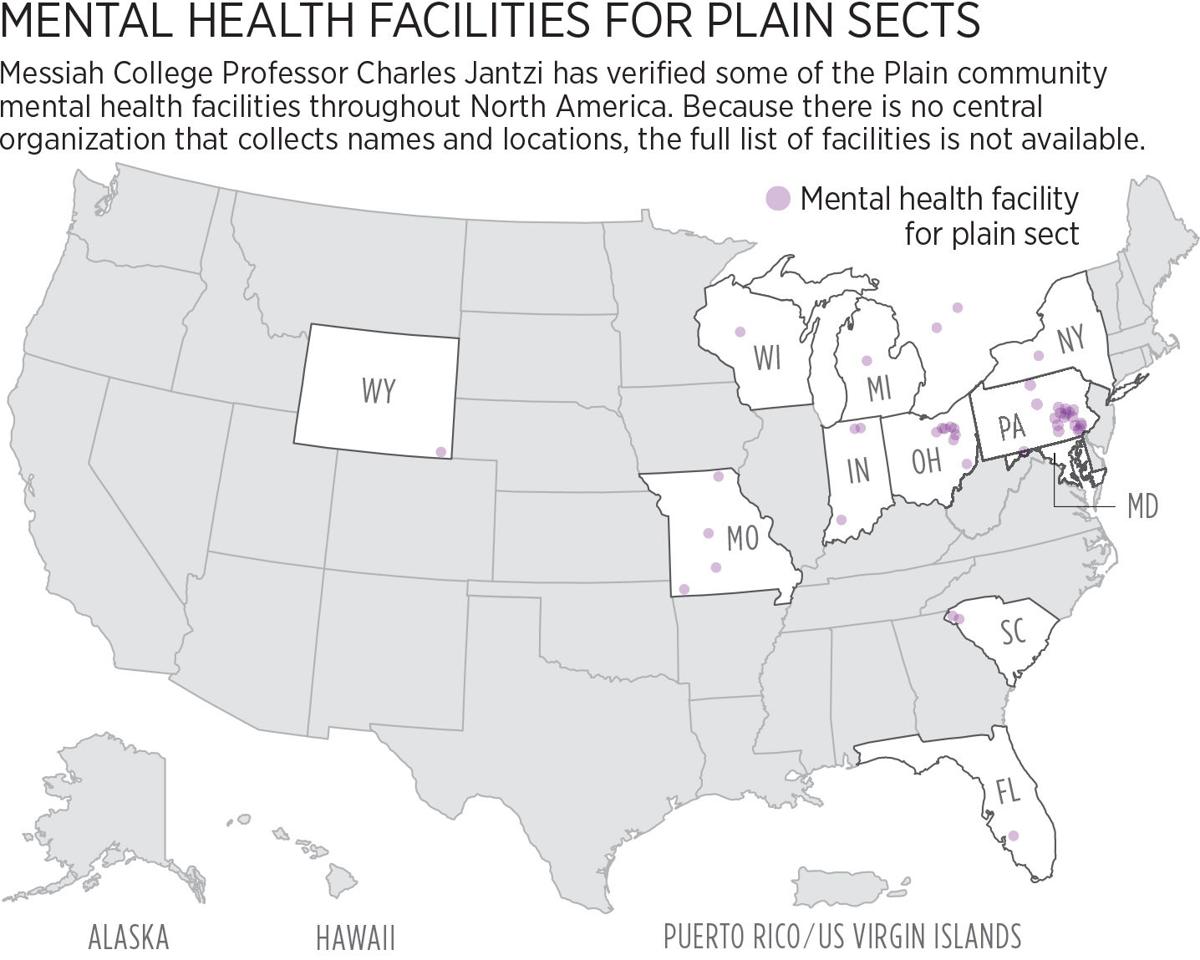 NEWVILLE — The entrance to Whispering Hope branches off a rural country road at the foothills of state forest land in Cumberland County, between Carlisle and Shippensburg.

No signs welcome patients or families. No buildings are visible from the road. In fact, Whispering Hope’s existence is known to few outside Amish and Mennonite communities who seek counseling at the retreatlike campus.

But the facility and others like it are now at the center of a debate over how justice is meted out in cases involving Amish and Mennonites: Are Plain sect people charged with sex offenses getting special treatment?

A case that wound its way through Lancaster County courts, ending with David Stoltzfus Smucker’s sentencing Friday, has brought new attention to how sex crimes are handled in both the justice system and offenders’ and survivors’ close-knit communities.

Prosecutors and judges say religion is not a factor in sentencing and that each action taken in a case is based on the totality of the circumstances.

Critics, however, say members of the Plain community who are charged with crimes may receive special treatment.

“In general, I do not support any kind of treatment that is done by a non-licensed, non-clinical counselor -- especially in a specialty area like child sexual abuse or sexual offender,” said Linda Crockett, director of Safe Communities, a nonprofit that works to stop child sexual abuse.

The state has no record of a license for Whispering Hope, the facility where David Stoltzfus Smucker, 75, stayed for 10 months until his sentencing Friday.

Stoltzfus was charged in March 2019 with 24 felonies related to sexual assault of children. His bail was set at $2 million, and he landed in the county prison.

Later that month a judge approved a defense request to allow Smucker to stay at Whispering Hope in Newville.

Smucker’s move got an immediate reaction from abuse prevention advocates — some felt he was given special treatment by the justice system because he is Amish. Others were unsure about the nature of the facility and what services it provided.

‘A Bible based counseling program’

Whispering Hope was established in 2001 to serve the Old Order Amish, Weaverland Conference, Groffdale Conference and the Stauffer Mennonite Churches.

The organization’s statement of purpose is a “Christian home with a Bible based counseling program for men who are emotionally disturbed, depressed, having spiritual and marital problems, moral obsessions and mental illnesses.”

Nestled in the middle of farmland about 20 minutes outside of Shippensburg, the campus looks more like a summer camp than a mental health facility. No fences or gates enclose buildings and neighboring farmhouses are visible from the main building, including one home with a swing set.

“No Children under the age of 18 beyond this point,” reads a small wooden sign a short distance from the road.

Three months before his arrest, Smucker had a stroke, which required him to use a wheelchair, according to court documents. And while in prison, he fell twice and injured his hip. The prison asked that he be transferred because it could no longer care for him, said Christopher Sarno, Smucker’s defense attorney.

“Medical costs incurred at the prison would have been the financial responsibility of the county, so that was (also) considered,” said Brett Hambright, a spokesman for the prosecutor’s office. “If he were to have been transferred to a traditional hospital, there would have been costs associated with someone guarding him 24/7.”

Whispering Hope is not the only mental health facility established by the Amish and Plain Mennonite communities. Dozens of similar sites have opened in North America over the past two decades — from Ontario to Florida and Michigan to Missouri. At least five are in Lancaster County.

A group of largely Amish, and some Old Order Mennonites, in Michigan became concerned about the mental health of their communities and started a group called the “People Helpers” in the late 1990s.

Building momentum from the movement, an Amish deacon in Michigan opened up Harmony Haven as a place to take in “troubled boys,” Jantzi said. The referrals poured in. Churches started establishing their own facilities.

Each location has a specialty. Conestoga Retreat in Ephrata is specifically for couples who have “marital issues.” Kurtz Homestead in Ephrata is for young girls who are dealing with issues ranging from depression to trauma from sexual abuse. Sunrise Meadows in Paradise is for men who are transferred from short-term programs for a longer inpatient stay.

Conestoga Retreat, Kurtz Homestead and Whispering Hope work in network with each other, operating under Whispering Hope’s designation as a 501( c) 3 non-profit, according to their newsletter.

The facilities work within a loose network created by word-of-mouth referrals between church leaders and community members throughout North America.

For most of the facilities, counselors are not trained therapists, nor are they state-licensed. Whispering Hope staffers are ministers in their congregations.

Whispering Hope, “is not licensed by the department’s Office of Mental Health and Substance Abuse Services because it does not meet the definition of any mental health service or program licensed by (the office)” said a Department of Human Services spokesperson.

Marc Masoner, a social worker and co-host of a podcast called “The Plain People’s Podcast,” has interviewed former employees of Plain-run facilities.

Masoner, who is an abuse survivor and former member of a Plain church, speaks with former Amish and Plain Mennonite abuse survivors on the podcast.

“It’s appalling, because these people, their mental health is being left in the hands of untrained professionals.”

There have been a “few” cases in past years in which defendants stayed at Whispering Hope or a similar facility, according to the district attorney’s office.

According to Hambright, a recent case involved John A. Lapp Jr. — a Quarryville man who was sentenced in 2018 to two years in prison and 34 years of probation for sex crimes against children that occurred over 20 years. Lapp was released to Whispering Hope after his arraignment without having to deposit any money or form of security.

Anecdotally, representatives from the county’s Children and Youth, district attorney’s office and judges all said they are aware that other defendants have been at the facility in the past, but they had no details.

Sarno, the attorney for both Smucker and Lapp, said in an email that his clients typically seek counseling at these facilities on their own, not through a court order.

“The court, or rather, the District Attorney requires state licensed counseling once the person is convicted,” he said. “Mr. Smucker went to Whispering Hope only because the prison could no longer accommodate him, and the D.A. did not want him going home.”

The difference between the rights an individual has when they are facing charges compared to post-conviction is a crucial concept to consider when understanding bail, Lancaster County President Judge David Ashworth said.

“There is a very, very important constitutional principle that a person is innocent until proven guilty,” he said. “So the purpose of bail is to ensure that the person shows up to the next proceedings, and most importantly, to protect the community and perhaps remove the person from the environment they’re in where they can perhaps victimize somebody else.”

Ashworth was the judge on duty the day Smucker’s bail modification petition was heard last March. Ashworth signed the petition after hearing that the prison wasn’t the best place for Smucker, and that the district attorney’s office and the children and youth agency did not object to the defense’s suggestion of Whispering Hope. 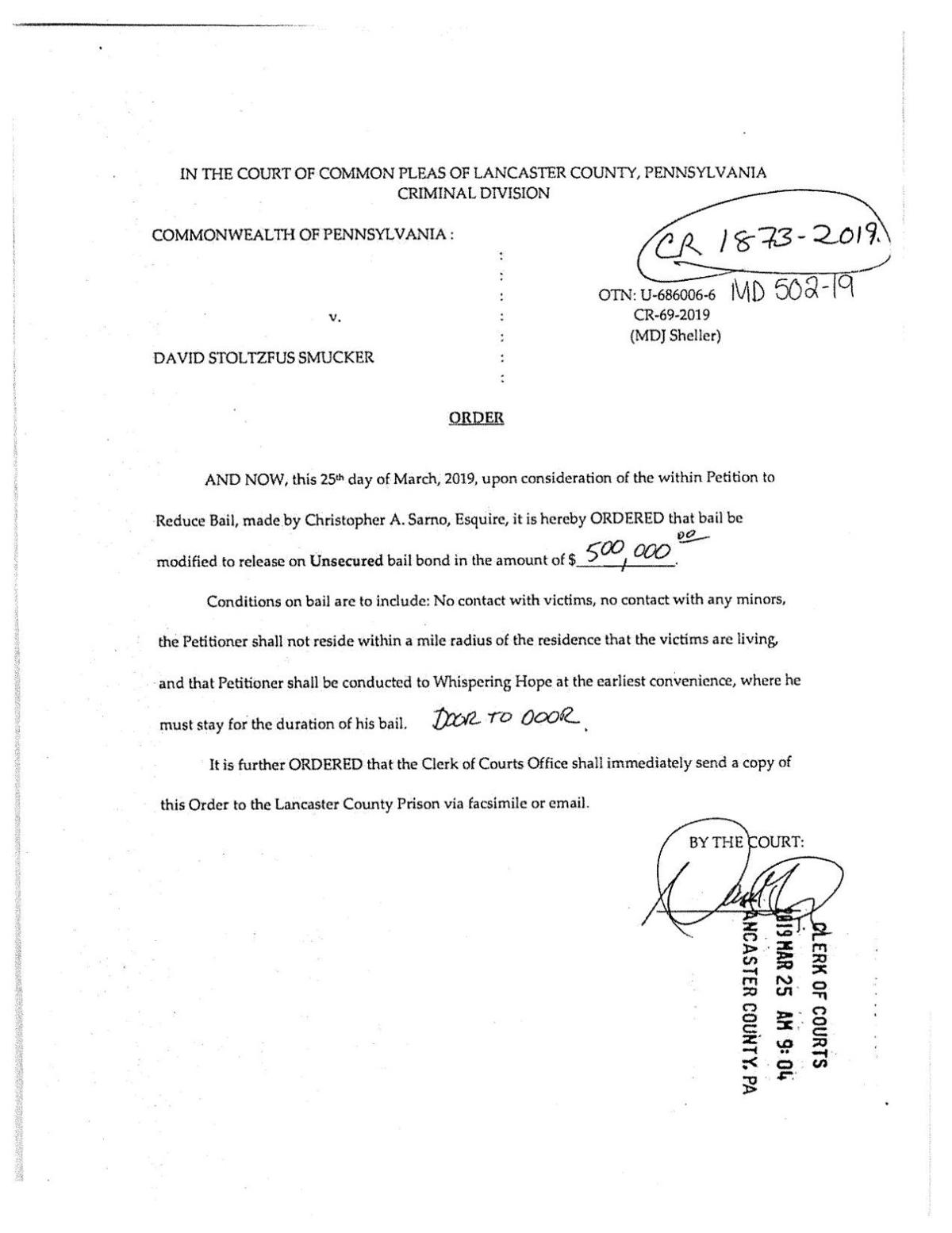 Ashworth also agreed to reduce Smucker's bail to $500,000 from $2 million without Smucker having to deposit any money or form of security.

“It needs to be understood that Whispering Hope, or any other type of (similar) facility, is not intended to be a treatment facility - it’s not intended to be a place where you would send somebody after sentencing,” Ashworth said. “In this situation, it was a place that allowed us to remove Mr. Smucker from the community where he was alleged to have offended people. And nothing more.”

On Friday, Judge Dennis Reinaker sentenced Smucker to 38 to 76 years in prison.

“It was a condition of bail,” Reinaker said. “His time there is not credited toward his sentence.”

Sexual abuse in Plain communities is the target of task force from judge, nonprofit leader

The courtroom was overflowing.