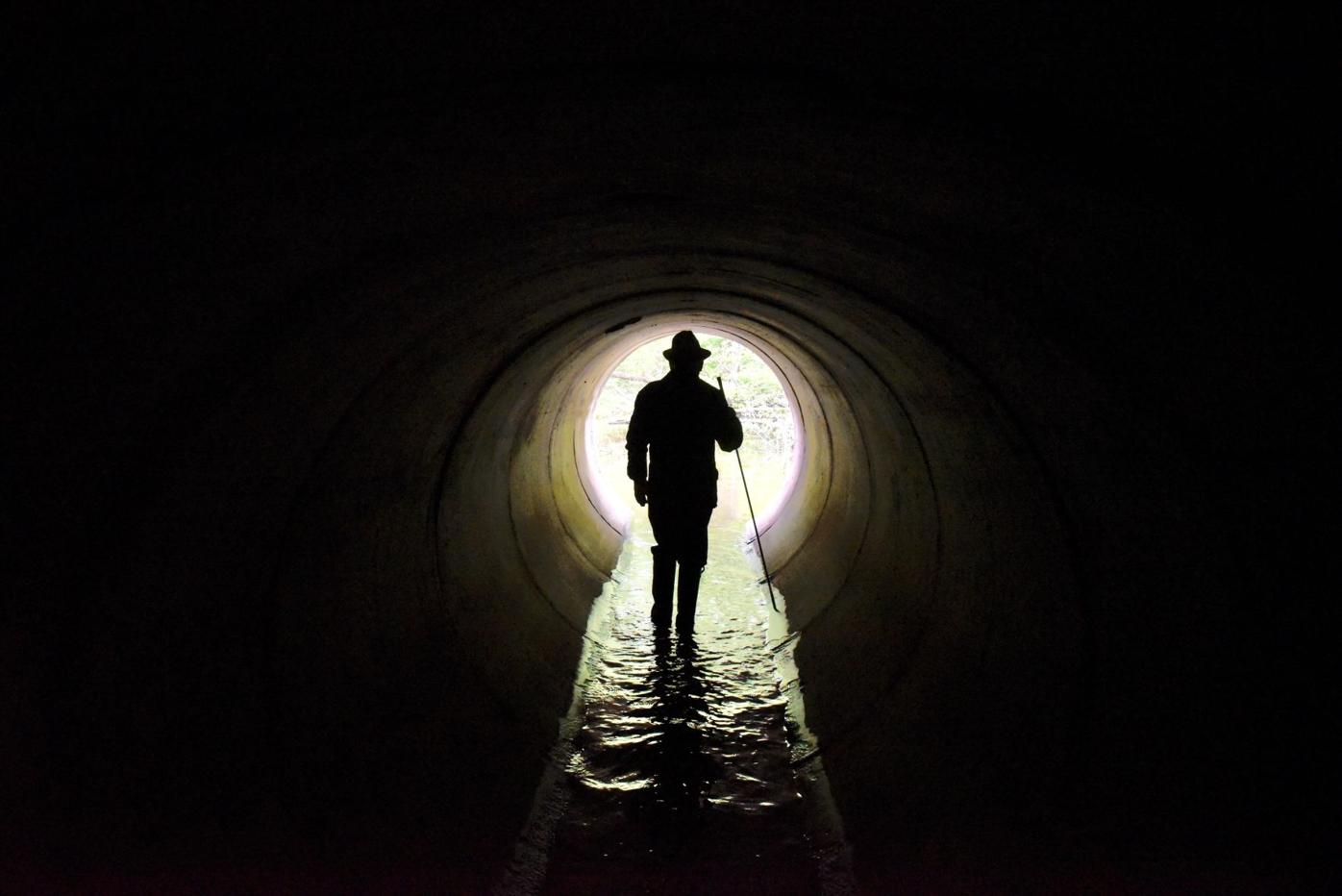 Frank Weaver Jr. wades through the meager beginnings of the Conestoga River as it passes underneath the Pennsylvania Turnpike. 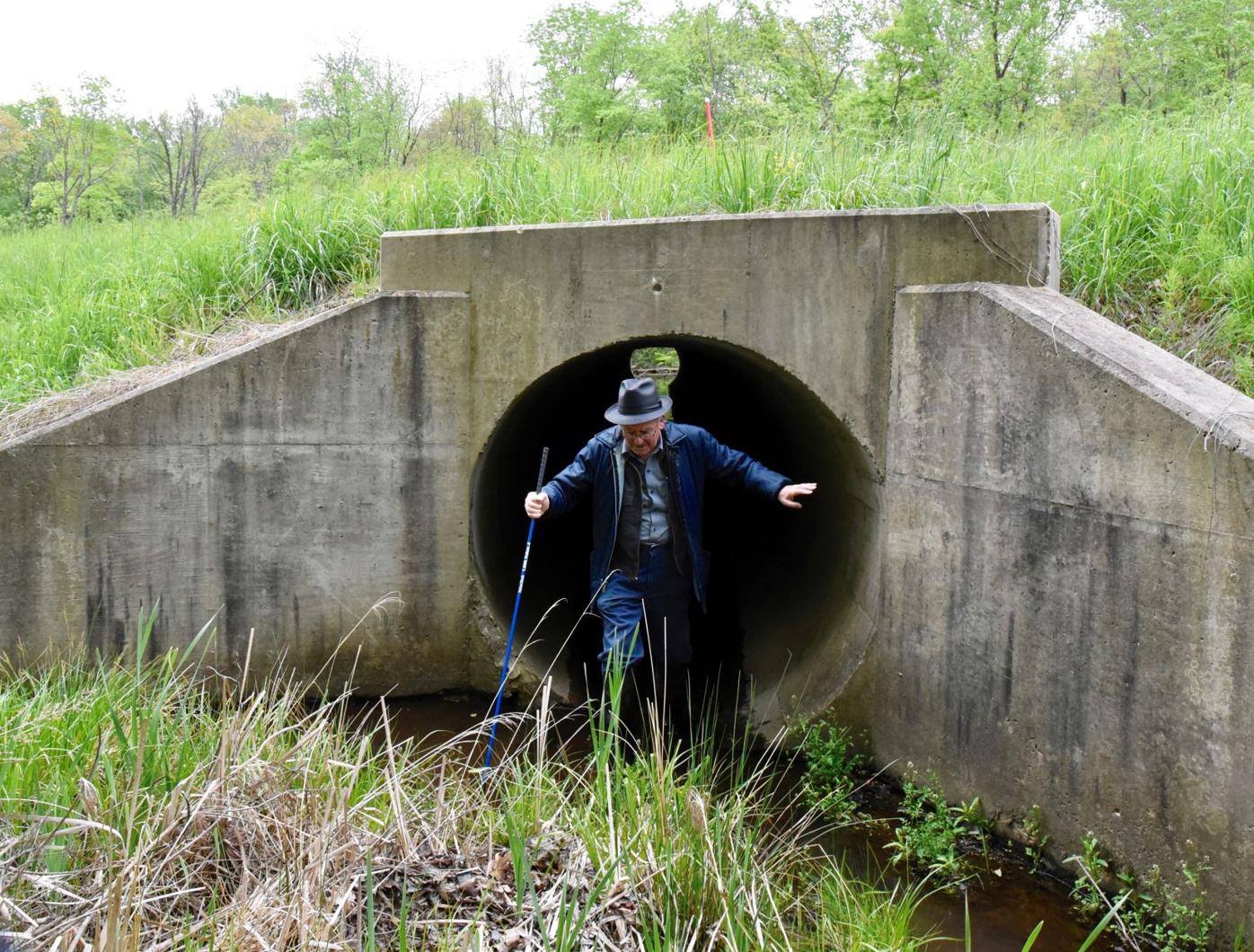 Frank Weaver Jr. emerges from under the Pennsylvania Turnpike. 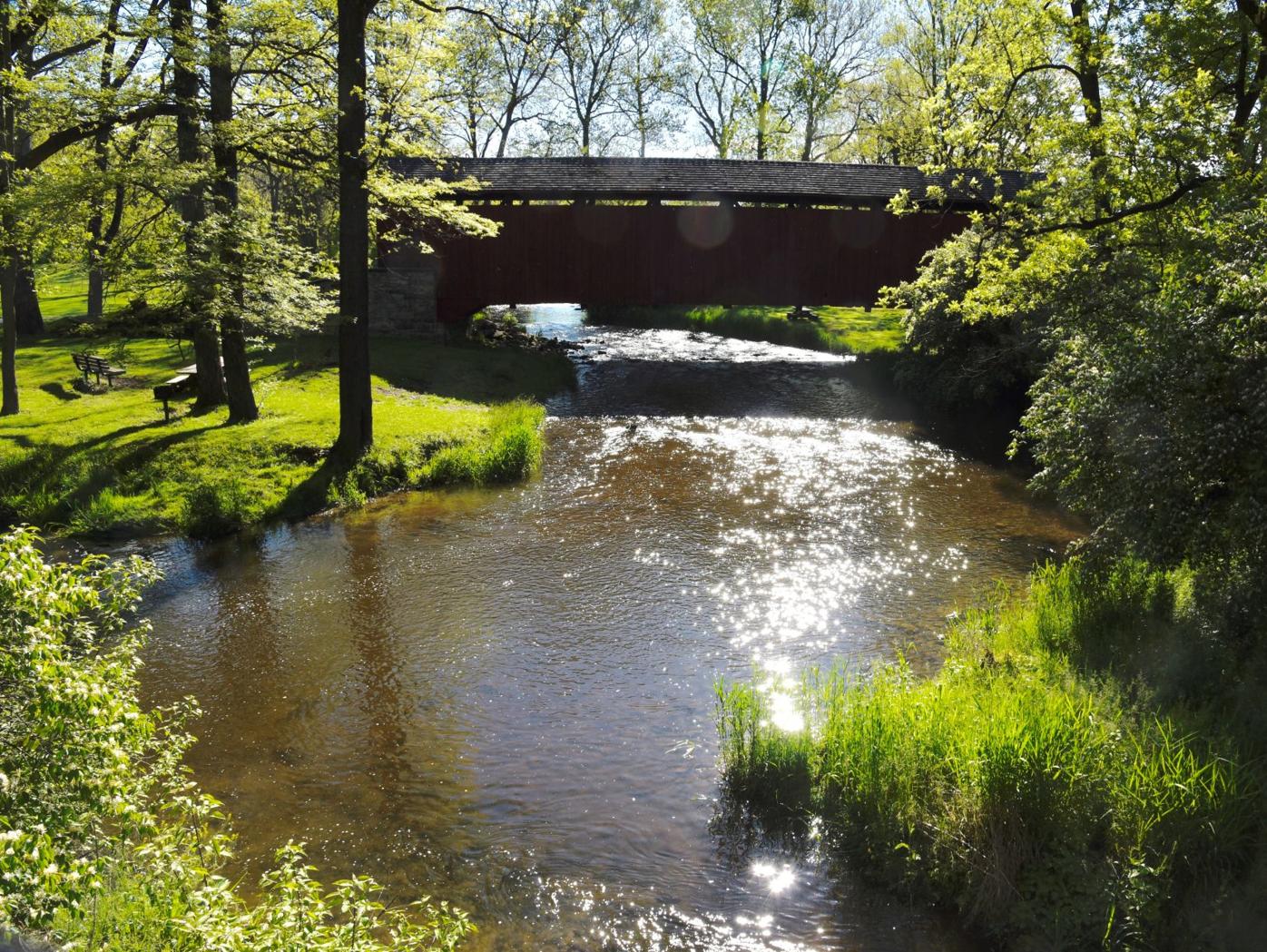 The Poole Forge covered bridge arches over the Conestoga River in Caernarvon Township. 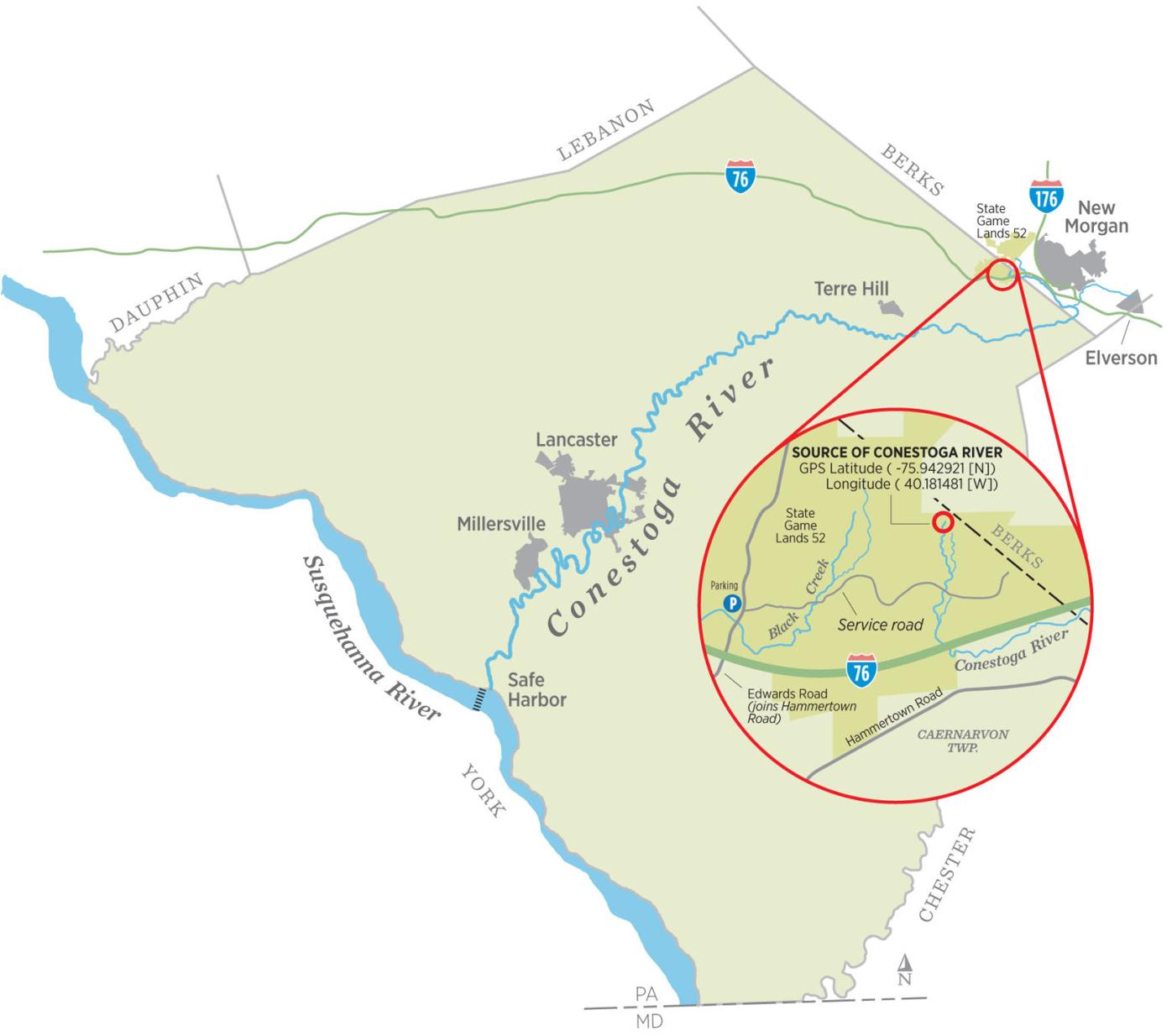 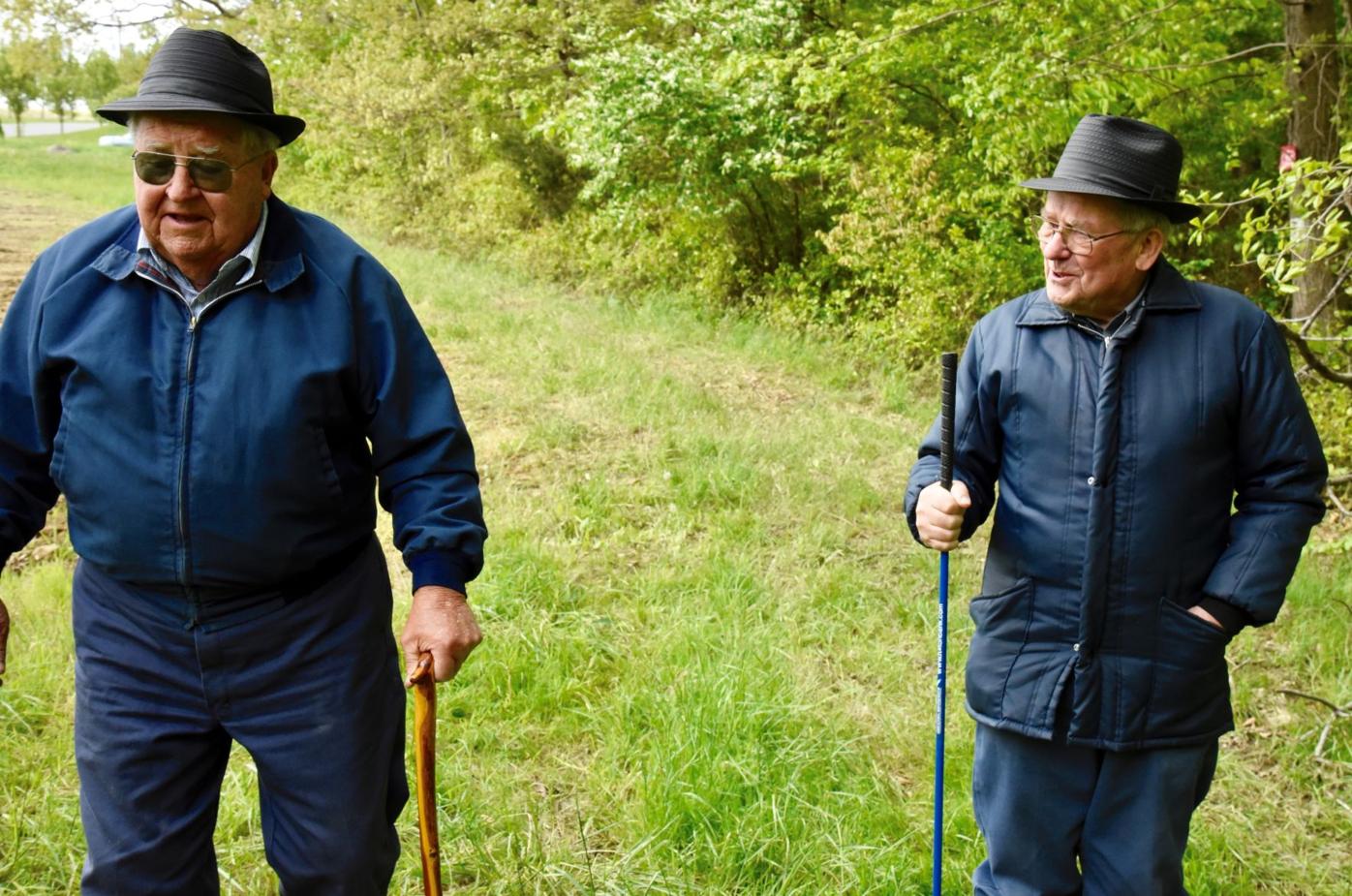 Paul Brubacher, left, and Frank Weaver Jr. of Caernarvon Township start a trek to find the source of the Conestoga River. 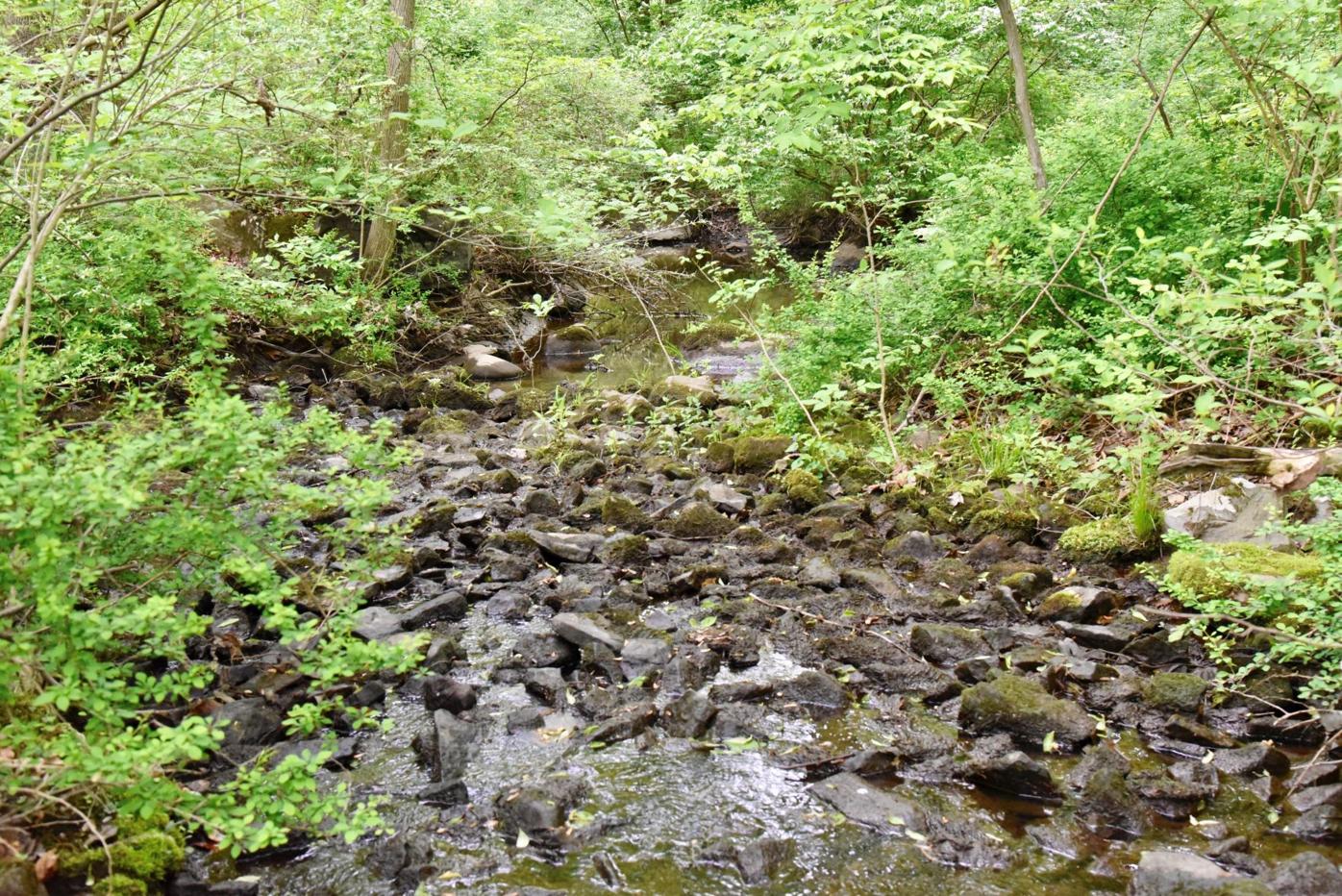 The fledgling Conestoga River near where it flows under the Pennsylvania Turnpike. 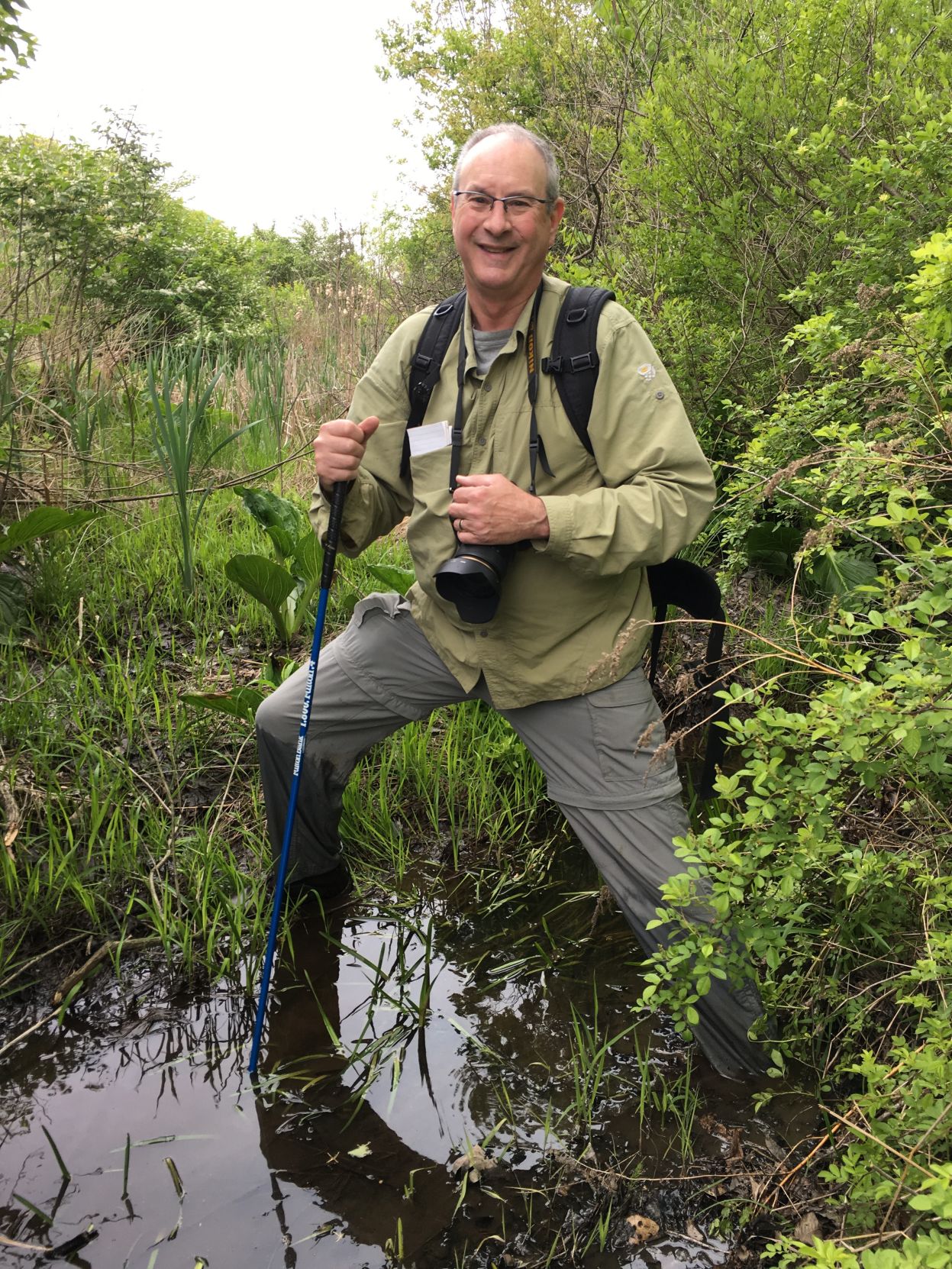 Reporter Ad Crable shows that the Conestgoa River, a quarter-mile from its source, is a mere puddle jumper.

Benjamin Weaver on Weller Rocks, where a body was dragged after an infamous murder in the 19th century. 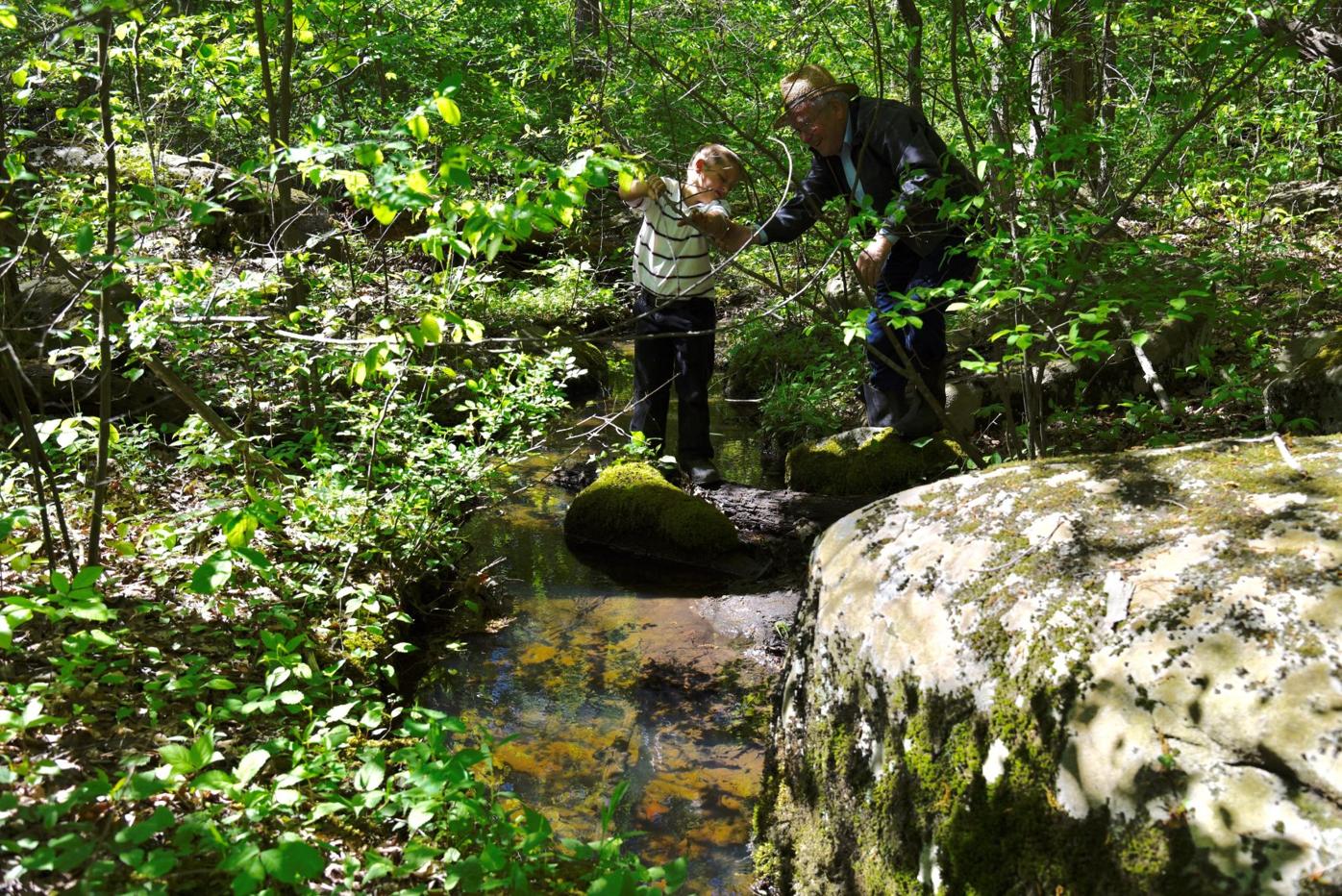 Frank Weaver Jr. and his grandson, Benjamin Weaver, fight their way through brush along the Conestoga River near its headwaters. 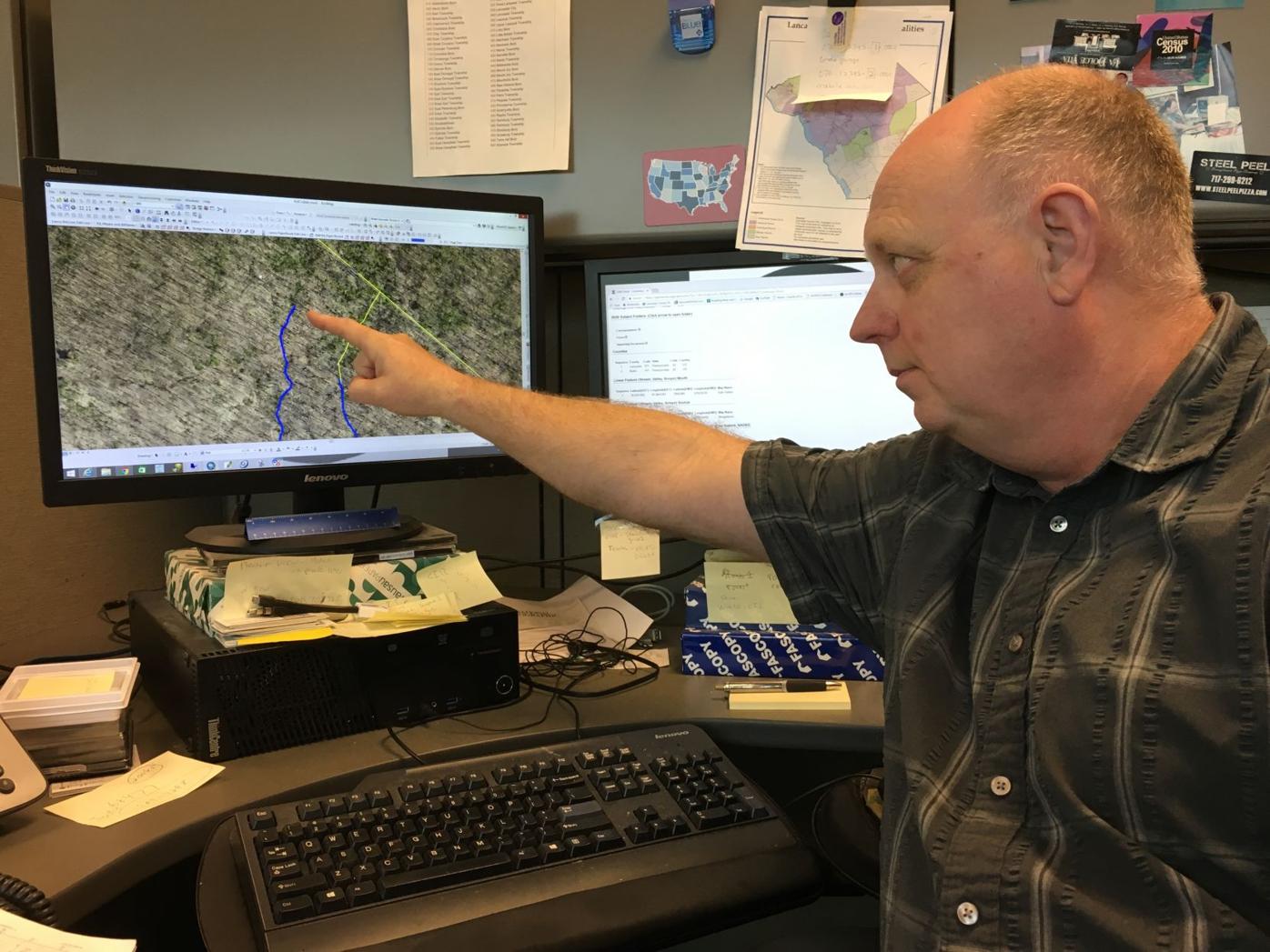 Steve Gochenaur, a Geographic Information Systems analyst for Lancaster County, points to the spot in Brecknock Township where the source of the Conestoga River begins from under a boulder. 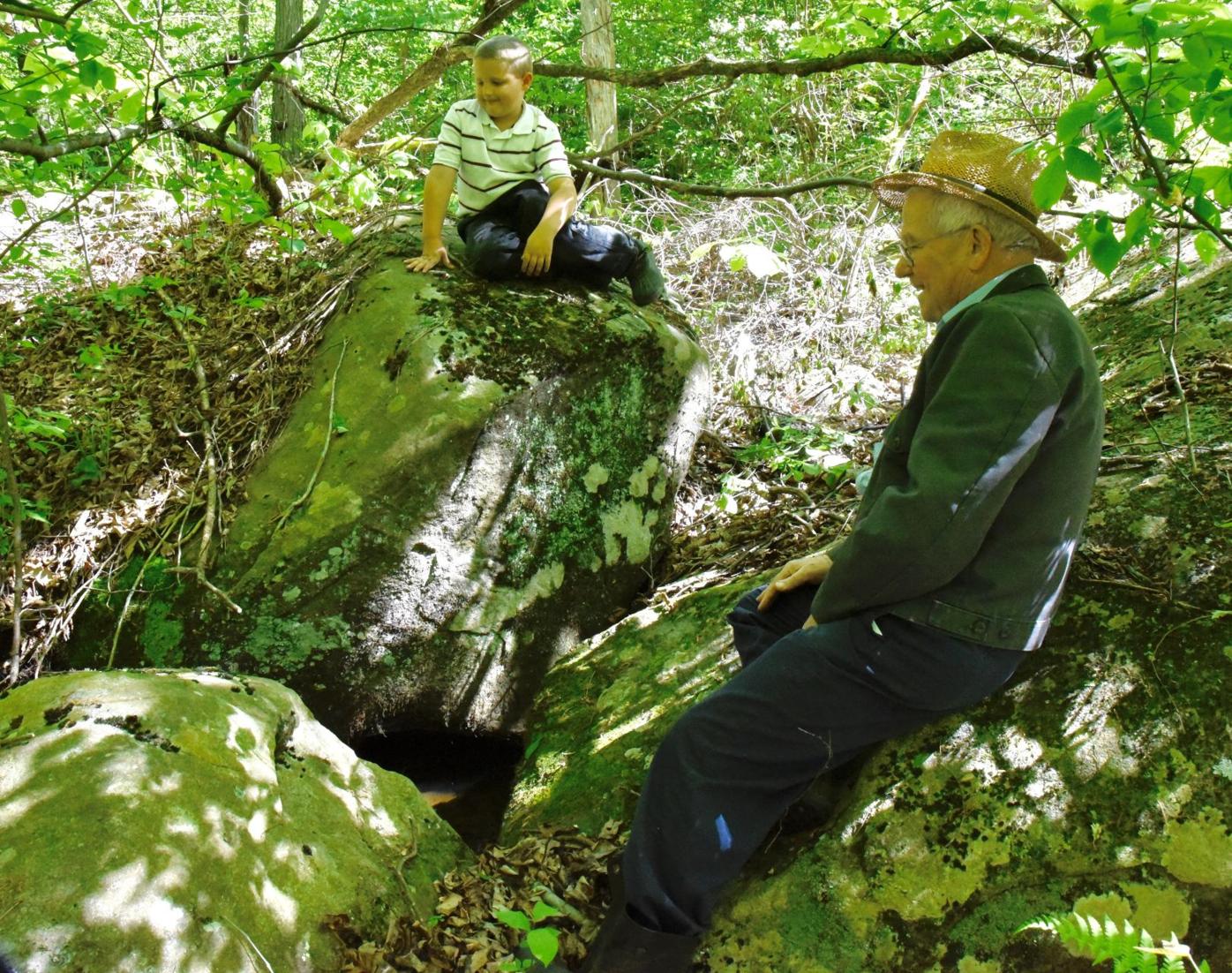 Frank Weaver Jr. and his grandson, Benjamin Weaver, examine the source of the Conestoga River where it emerges from under a boulder.

Frank Weaver Jr. wades through the meager beginnings of the Conestoga River as it passes underneath the Pennsylvania Turnpike.

The Poole Forge covered bridge arches over the Conestoga River in Caernarvon Township.

Reporter Ad Crable shows that the Conestgoa River, a quarter-mile from its source, is a mere puddle jumper.

Frank Weaver Jr. and his grandson, Benjamin Weaver, fight their way through brush along the Conestoga River near its headwaters.

This story was originally published in June.

It isn’t long at all, as the three of us walk the edge of a freshly plowed farm field in Caernarvon Township in far northeastern Lancaster County, before we encounter the skunk cabbage, dense thickets and spongy earth.

This forbidding place we know from historical accounts is the beginning of the Great Swamp. Somewhere ahead on a slope in the Forest Hills is the braid of springs that form the headwaters of the Conestoga River.

Here, some of Lancaster County’s first pioneers from Wales carved out farmland on the edge of the swamp but went no farther. Later, the area around the rugged wetlands was home to freed slaves and others smuggled through the Underground Railroad, bootleggers and moonshiners.

The source of the Conestoga seems shrouded in mystery as deep as the Great Swamp.

So, the thrill of an adventure beckoning, I determined to try to find for myself the very spot where the river that’s figured so prominently in Lancaster County's early development presumably springs from the earth, some 64 miles from its date with the Susquehanna River.

Surprisingly little has been penned about the Conestoga’s birthplace, probably because it emanates from a thick tangle of soggy wetlands ensconced in remote woodlands, the former Bethlehem Steel Grace iron ore mine property, now part of State Game Lands 52 in Lancaster and Berks counties.

In 1912, Frank R. Diffenderffer, a former editor of the Lancaster New Era, wrote a historical paper on the Conestoga in  which he says “persons of the highest veracity living along its headwaters” convinced him the two streams that form the headwaters are in Lancaster County in what he called the “Big Swamp.”

But the Susquehanna River Basin Commission has the headwaters rising in southern Berks County. So does Wikipedia.

I began by recruiting Paul Brubacher, 83, and Frank Weaver Jr., 79, two longtime farmers and amateur historians from Caernarvon Township who have long been fascinated by the Conestoga.

Neither had seen the headwaters but wanted to do so.

Only minutes after we began our expedition and ran into the wetlands, Weaver goes off trail to reconnoiter.

He returns about 15 minutes later, huffing and minus his hiking stick. He has found the river — more like a small stream at this point in its infancy — and where it goes underneath the Pennsylvania Turnpike.

But he reports it will be extremely tough going. Brubacher decides to head back.

Weaver and I plunge in and follow the slow-moving waterway, about 10 feet wide. The rumble of tractor-trailers and speeding commuters on the Pennsylvania Turnpike loom closer.

After about 15 minutes of zigzagging through the thick cover, we find the spot where the fledgling waterway flows under the highway. The river is herded through a 6-foot-high galvanized pipe under the roadbed.

It’s pretty dark as we walk under four lanes of traffic. We don’t see bats, but judging from the well-worn trails in the woods near both ends of the tunnel, deer find this method of traversing the Turnpike preferable to dodging vehicles at 70 mph.

We exit the other end of the tube to brilliant sunshine. I stop to have my photo taken straddling the stream.  Here, it has already shrunken to a mere puddle jumper.

Back in the woods, progress is slowed to a crawl by the thick growth. I decide to wade the knee-deep stream itself. Weaver elects to try to flank the stream and find more open walking.

Occasional small streams in the woods merge and make it hard to determine which is the main branch.

A retrospective of the Conestoga River

I call out to Weaver but there is no answer. And I failed to write down his cell number, foolishly thinking there’s no way we’d get separated. I’m not sure where I am and have no idea where my companion is. What to do?

I decide to push on for a bit more and see a clearing off to the side. I emerge onto a grassy lane that I figure to be a maintenance road for the game lands.

About then Weaver calls. He had lost sight of the stream and, after not hearing a reply to his shouts, headed back to the highway. Stay put, I say, and I’ll bushwhack toward the sound of the traffic.

Cutting through the woods and almost to the Turnpike, I come upon a ridge made up of huge boulders sometimes stacked on top of each other. What an impressive boulder field I think, picking my way through its channels.

10 things you may not know about the Conestoga River

Later, reading through the “The Caernarvon Rambler” newspaper columns of the late Robert E. Simpson, I learn this is Weller Rocks, named after a John Weller who was bludgeoned to death in 1876. His body was dragged to the rocks.

Charged with the heinous crime were his wife, with whom he lived in a cottage about 400 yards away, another relative and three other men. They were acquitted in a well-publicized trial.

It is starting to rain and Weaver and I are exhausted by the push through tangles and unnerved by our separation. We decide to call it a day. We know we have found the headwaters in their infancy.

All weekend it eats at me. I want to find the very spot where the river begins. I call Weaver up and find out he too wanted another crack and had, in fact, planned a solo attempt on Monday.

This time, we park in a game lands parking lot off of Edwards Road and walk the maintenance road to the spot where the stream punches through a culvert. Weaver has brought his 6-year-old grandson, Benjamin Weaver, of Narvon, who is game but I suspect does not know all he is in for.

Thanks to an old logging road on the game lands, we are able to parallel the stream and make good time heading upstream. Its size continues to dwindle as the stream moves slightly west into Brecknock Township.

I cut over to check its status and suddenly find no stream. I backtrack about 50 feet and there, between a jumble of lichen-covered boulders, water bubbles from underneath.

Eureka! After seven ticks, muddy boots, skinned shins and brier scrapes, here is the Conestoga’s humble beginning. And what a beautiful birthplace!

“Frank! Come over here. I do believe that’s the source of the Conestoga.”

Weaver emerges through the brush and crouches down. “I’d say it is,” he replies.

But are we in Berks or Lancaster County?

A week later, I pay a visit to Steve Gochenaur, a Geographic Information Systems analyst for Lancaster County. Gochenaur taps into a U.S. Geological Survey website and peers over large-scale satellite images of where we were.

He confirms that the start of the stream is in Brecknock Township, Lancaster County — by a mere 242 feet. We also discover that the source does not even show up on many county maps.

How clean are the streams and rivers in Lancaster County? State releases interactive map so you can find out

Is the stream near you safe for swimming? Is it safe to eat the fish you catch from it? Can aquatic insects survive in it?