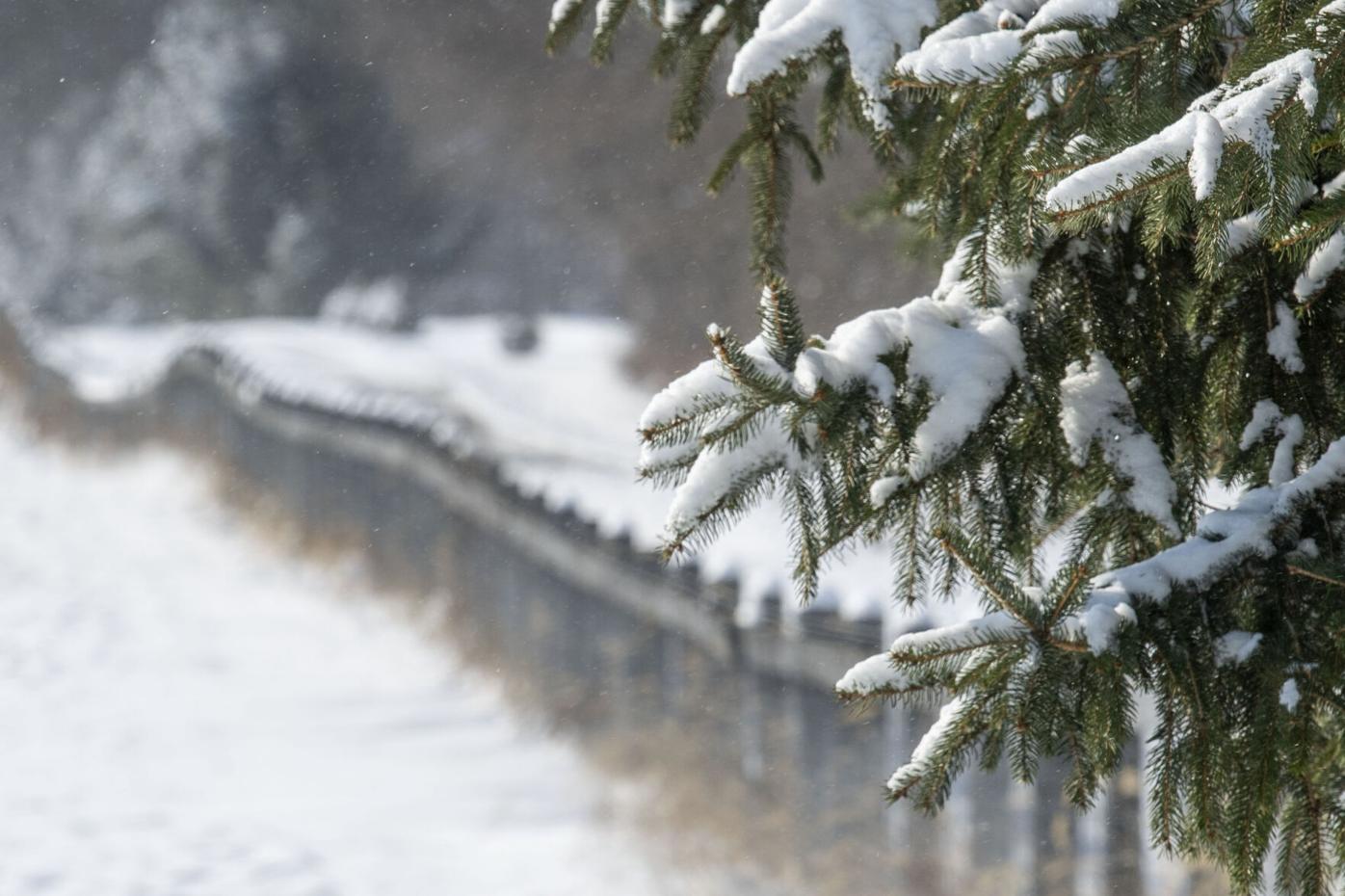 Snow sits on a tree in northern Lancaster County on Friday, January 7, 2022. An overnight snowstorm dropped the first accumulating snow of the season, with reports between 3 and 5 inches measured around the county. 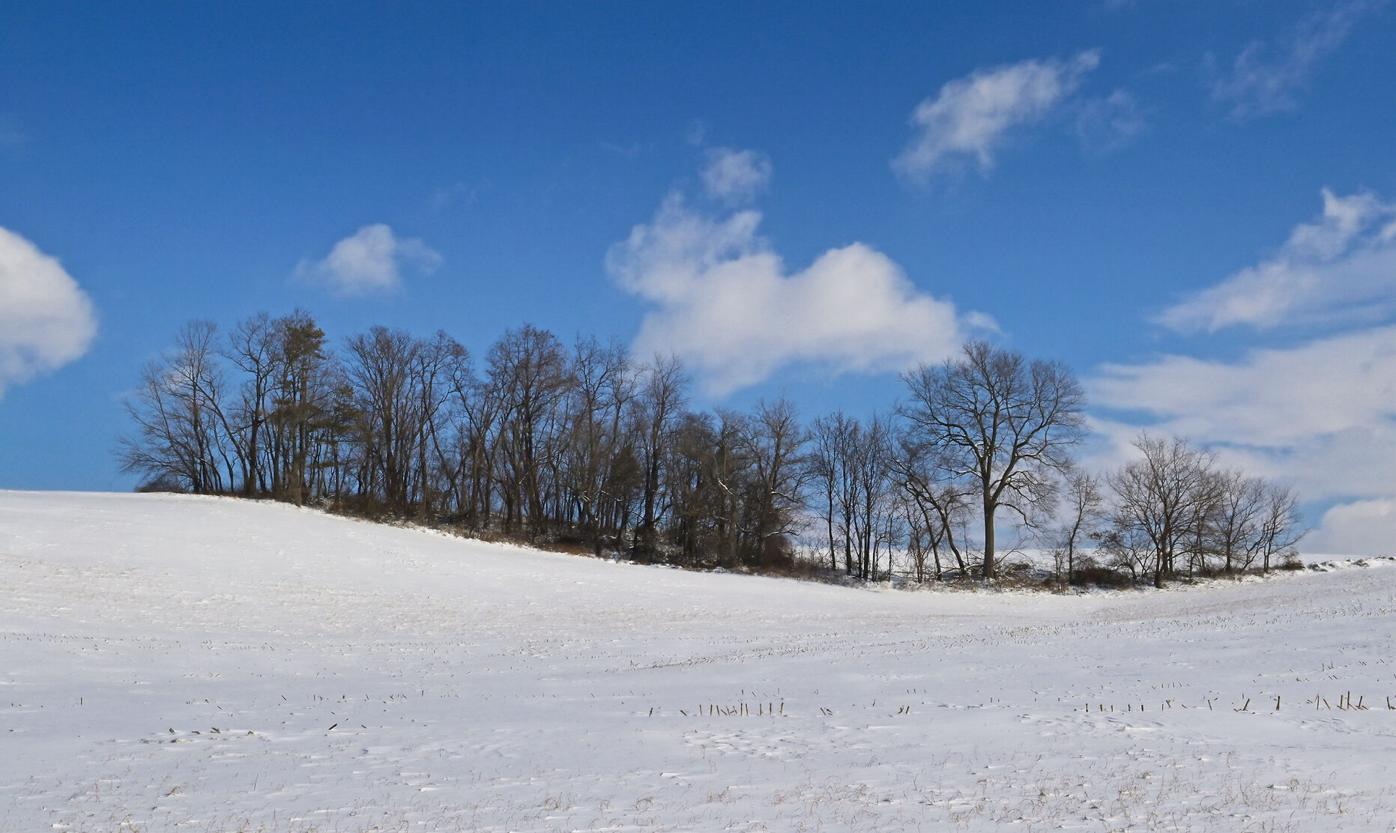 A stand of trees is pictured along the 100 block of Martic Heights Road in New Providence on Friday, Jan., 7, 2022.

Snow sits on a tree in northern Lancaster County on Friday, January 7, 2022. An overnight snowstorm dropped the first accumulating snow of the season, with reports between 3 and 5 inches measured around the county.

A stand of trees is pictured along the 100 block of Martic Heights Road in New Providence on Friday, Jan., 7, 2022.

As an arctic cold front made landfall thousands of miles west of Pennsylvania on Thursday morning, meteorologists began predicting how much snow it could bring to Lancaster County.

Friday's high temperature will reach the upper 30s, and the low and night will drop into the low teens. Saturday will be nearly 20 degrees cooler, according to the National Weather Service in State College.

The drop in temperature will be brought on by the arctic front that will be coming through the area Friday morning, NWS meteorologist Craig Evanego said.

Factoring in the wind − with gusts as high as 29 mph possible − it will likely feel like it's even colder, possibly in the low teens.

NWS predicts that Lancaster County will get between 3 and 5 inches of snow Sunday, mostly accumulating overnight.

"The snow could be heavy at times," NWS said in its forecast.

Meteorologist Kyle Elliott, the director of the Millersville University Weather Information Center, said that Saturday will likely be the coldest day of the year and possibly the coldest afternoon Lancaster's had since February 1, 2019.

"I don't think the winds are going to be strong enough to get us down to zero," Elliott said. "I think we'll see high single digits to around 10 (degrees)" adding in the wind chill.

Sunday night is when Lancaster County could begin to see snow, and Elliott said there are two possibilities for Lancaster County: several inches of snow accumulation or a little snow and a lot of sleet and rain.

"This is a very complex setup," Elliott said. "The exact track of the storm system is not yet set in stone. We know it's going to happen, but don't know the exact track yet."

A mild afternoon is in store for central PA. However, an arctic cold front will cross the region on Friday, ushering in much colder air and setting the stage for a potentially significant winter storm late this weekend. Here are expected highs today, Friday, and Sat. #ctpwx #pawx pic.twitter.com/X8dIT6Zbah

"We could get a pretty good front-end thump of snowfall later Sunday evening into Sunday night," Elliott said. "It could bring several inches of accumulation."

The determining factor, however, is the track of the storm.

"Storms like this are notorious for a changeover to rain in the lower Susquehanna Valley," Elliott said. "How much snow falls here, in all likelihood, is determined on that changeover of sleet and rain."

Evanego, the NWS meteorologist, said that Lancaster County "could see a bit of everything."

Both Evanego and Elliott said it's too far out to give a good guess as to how much snow Lancaster County could see. Elliott plans to put out his first-draft of snowfall amounts sometime Friday evening, when he can see how the storm is tracking in better detail.

AccuWeather meteorologists reported that the storm could "wreak havoc on a large corridor of the eastern United States."

AccuWeather senior broadcast meteorologist Chris Nallan said in a tweet that Harrisburg has about a 30% chance of getting between 6 and 10 inches of snow between Sunday at 7 p.m. and Monday at 6 p.m.

Here's the latest @accuweather #wintercast for a few of the many cities that will be impacted by this major winter storm. This storm will have it all... heavy snow, ice, rain, wind and even thunderstorms. A lot to follow here everyone, so be ready! pic.twitter.com/MwNImYIywz

Elliott said he's cautious about predicting a number this far in advance.

"Be wary of snowfall maps issued more than three days before the (storm) system," Elliott said, highlighting the drastic changes a storm could take in that time.

The "boom" scenario, where Lancaster County gets hit with another heavy snowfall, is about 25%, Elliott predicted on Thursday. The more likely scenario is for a brief period of snow that will change over to a wintry mix overnight Sunday into Monday morning.

The energy for the Sunday night/Monday storm is just now moving onshore in the Pac. NW, hence why it’s unwise to issue snowfall maps until tomorrow (which I will do). In terms of probabilities for LanCo: 75% chance of snow to mix to rain25% chance of all snow (“Boom” scenario)

As the system continues to develop, meteorologists will have a better idea of what's in store for Lancaster County.

As of Thursday afternoon, here's what other local forecasters are calling for:

"If this system was all snow, our team would be ready to start providing snow amounts. But it’s not going to be that easy," Thackara said in his Thursday forecast. "Warm air could play a large role in determining snow amounts Sunday night as the storm intensifies along the coast and changes the snow to rain in some areas."

TRACKING THE NOR'EASTER:The latest guidance from both the American (left) & Euro (right) models indicates warm air winning out. Seems like a period of snow to start Sunday night followed by mixing and then rain by Monday. We'll see if this trend continues. #27Weather #PAwx pic.twitter.com/Fi1wpTneIG

Here's the latest on the next winter storm. At this point, it's trended to a wintry mix. Track is still uncertain, so it is way too early for amounts. More west means more mixing with ice and rain, less snow. Impacts are likely. We'll keep you updated at https://t.co/0o3wl8KVrt! pic.twitter.com/eJN8lymtgx

As of Thursday morning confidence is high in an impactful winter weather event for Sunday night in to Monday morning. The track will be key, if it hugs the Coast we will see more snow, if it tracks further inland (Along I-81) we would see more of a mix to plain rain...Stay tuned! pic.twitter.com/HIeQRxKeuS

The first snow fall of 2022 in Lancaster County [photos]

Scenes from around Lancaster County after the first snow fall of 2022 on Friday morning.

'She knew how vulnerable we were': Brides feel vindicated after Penn Township beautician charged with defrauding them

Three weeks before her wedding, Jeni Nulty received a message no bride ever wants to get.

The number of patients hospitalized with COVID-19 in Lancaster County reached 233 Wednesday,…

A new cigar lounge and smoke shop has opened near the Columbia Market House.

One dead in Manheim Township vehicle incident, cause unclear

One person is dead following a vehicle incident on Harrisburg Pike in Manheim Township Thursday night.

Lancaster County could see several inches of snow fall beginning Sunday night, according to a meteorologist with the National Weather Service …

Snow is beginning to fall in Lancaster County; here's what's in the latest forecast for Sunday [update]

Another chilly week ahead in Lancaster County; here's what's in this week's forecast

Lancaster County has another chilly week ahead, though major winter weather is not currently expected, according to a meteorologist with the N…