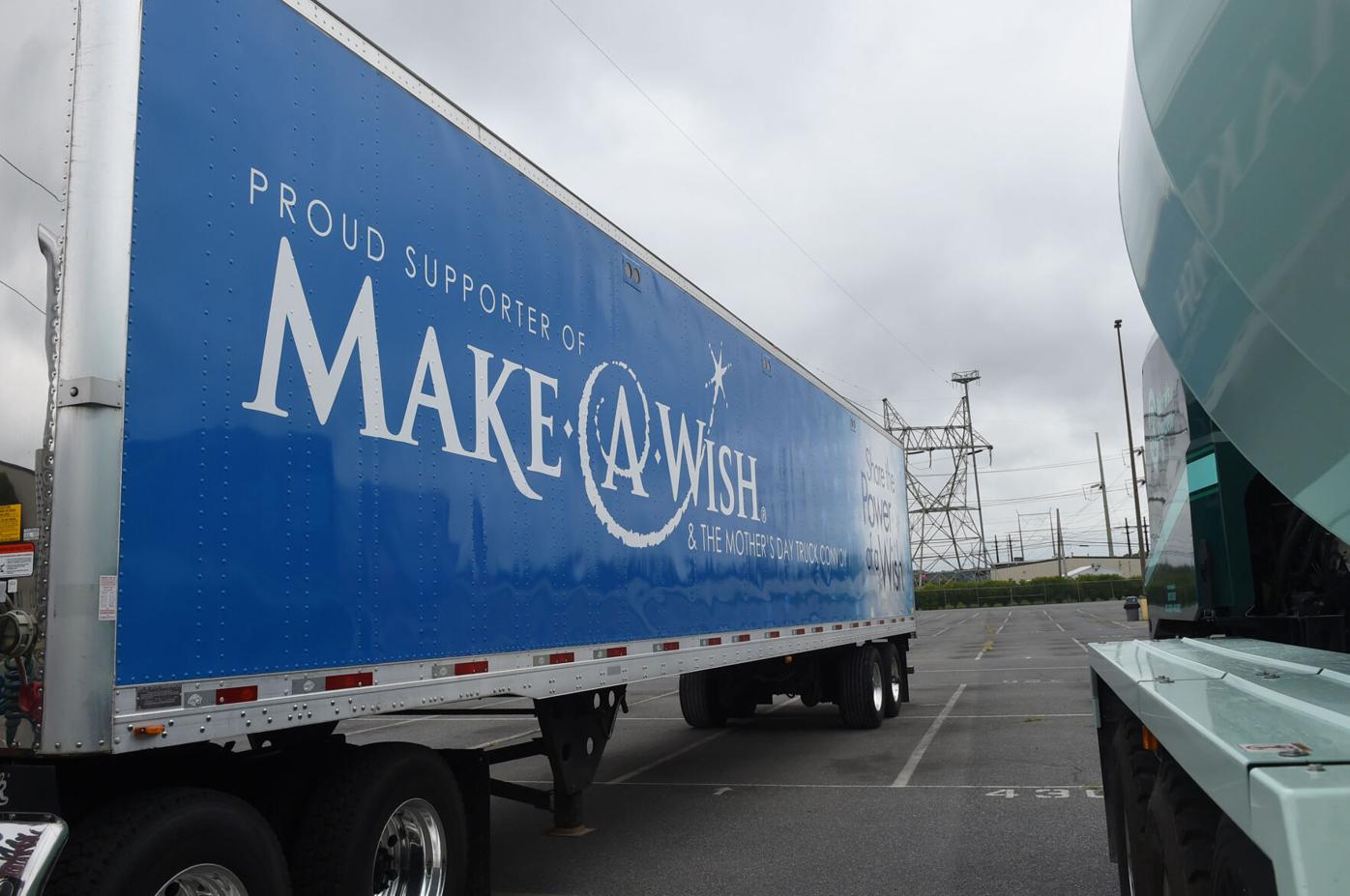 A trailer during the Make-A-Wish Virtual Truck Convoy kick-off in Manheim Sunday, August 16, 2020.

Editor's Note: This story has been updated to correct information about chicken dinners offered at the event.

One year after COVID-19 threw a roadblock in the way of the popular Make-A-Wish Mother’s Day truck convoy, 100 rigs will take part in this year’s event, with people welcomed to line the route.

The 31st annual convoy kicks off at 1:30 p.m. Sunday from the Manheim Pennsylvania Auto Auction in Manheim and ends at Routes 283 and 772 outside Mount Joy. Onlookers will be able to watch from any safe point along the convoy’s route, including Main Street in Mount Joy.

The event will be live-streamed at wishconvoy.org.

A virtual event in 2020 included only the top 30 truck drivers who raised the most money the previous year. They followed a route typically crammed with hundreds of people watching from the road and overpasses. Organizers encouraged the public to watch from home last year.

This year, “You can cheer for those drivers; they’re the reason we have Wish Kids,” said Cathy Schladitz, regional events manager at Make-A-Wish Philadelphia, Delaware & Susquehanna Valley. “We wouldn’t be granting those wishes if it wasn’t for those truck drivers fundraising.”

Before the pandemic, the event had grown to attract some 600 truck drivers to host a Wish Kid inside their rigs. Fundraising totals had also climbed to more than $600,000 in past years, Schladitz said.

Where: A 20-mile route from Manheim, through Main Street in Mount Joy.

For more information: Visit wishconvoy.org to pre-order a chicken dinner and bid in an online auction.

But because of the pandemic’s disruption, Make-A-Wish set this year’s goal at $300,000, which it is close to reaching. Nearly $285,280 had been raised as of Tuesday, according to the Make-A-Wish Philadelphia, Delaware & Susquehanna Valley website.

Manheim Pennsylvania Auto Auction did a lot of the heavy lifting for this year’s fundraising goal, donating $154,000 from the sale of a replica 1965 Shelby Daytona Coupe built in-house.

“We’re just excited to experience one because last year was going to be our first year,” said Joey Hughes, general manager at Manheim Pennsylvania Auto Auction. “So being the host, we’re just excited to be able to have an event and help them to kick this thing off again in its traditional form.”

While Sunday’s event will be larger and more accessible to watch in-person than last year, Schladitz said the convoy won’t include Wish Kids for the second-straight year. Some of the children may have compromised immune systems, she said.

As a result, the event won’t have its kid-friendly carnival either, Schladitz said.

But there are still plenty of ways to participate, Schladitz said. Organizers have brought back an online auction to raise money for Make-A-Wish and $15 chicken dinners for pre-order. Both can be found at wishconvoy.org.

The dinners can be picked up at Country Table Restaurant in Mount Joy between 11 a.m. and 1 p.m. on Sunday, according to the Make-A-Wish website.

The chicken dinners keep another tradition going started at the first event in 1990.

“They said, ‘We’ll have a chicken barbecue and give moms a break from cooking that day,’” Schladitz said of the original organizers. “So we’re happy to keep that chicken dinner Mother’s Day tradition.”

Make-A-Wish Mother's Day convoy postponed to August, will be virtual

The Mother's Day convoy that raises money for Make-A-Wish hit a barrage of speed bumps this year.

What Make-A-Wish is describing as a virtual truck convoy will be held Sunday, Aug. 16, with …

PA Treasury may owe up to $53M to Lancaster County residents; here's how to check if you're owed money

Thousands of Lancaster County residents are owed nearly $53 million by the state.

The Make-A-Wish Truck Convoy will make its way through Lancaster County today for Mother's Day starting at 1:30 p.m.

More than $292,780 was raised through the Make-A-Wish Mother’s Day truck convoy by late Sunday afternoon, according to Make-A-Wish Philadelphi…